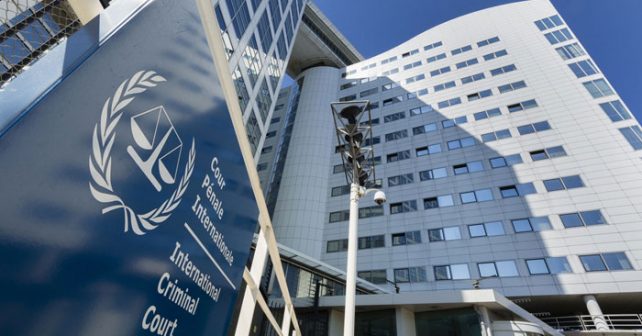 The determination by Fatou Bensouda, issued on November 14, will not bring changes to the battlefield in eastern Ukraine, where fighting between Russia-backed forces and Ukrainian Army has increased and decreased since April 2014 and continues despite Minsk ceasefire deal.

Nor will it change Russia’s annexation of the Ukrainian peninsula of Crimea, which has been condemned and rejected by the vast majority of United Nations member states. Moreover, Russia is not a member of The Hague-based International Criminal Court, whose mandate includes prosecution of war crimes and related crimes. Ukraine is not a member either, but Kyiv has accepted the court’s jurisdiction on a limited basis.

However, the report released on November 14 by Bensouda’s office, increases the legal weight of the arguments in Ukraine and in the West, that Russia is to blame for instigating the war. “According to the information received, the situation in the Crimea and Sevastopol is equivalent to the international armed conflict between Ukraine and the Russian Federation,” the ICC’s report says. “This international armed conflict started not later than February 26, when the Russian Federation employed members of its armed forces to gain control over parts of the territory of Ukraine without the consent of the government of Ukraine.”

Fatou Bensouda also called Russia’s annexation of Ukraine’s Crimea Peninsula an “occupation” by Russian forces. Moreover, the report highlights the plight of Crimean Tatars, who have faced persecution, kidnappings, and killings on the peninsula for their opposition to the Russian annexation. The report says: “the Russian occupation has been accompanied by the harassment and intimidation of the Crimean Tatars, including such measures as the closing of entrance to the territory of Crimea and the limitation of rights of association and freedom of speech”.

Prior to Putin’s annexation of Crimea and following military aggression in the Donbas region, there were only a few thousand Muslims in the central part of Ukraine. But now they make 100,000. Sheikh Said Ismagilov, the mufti of the Kyiv-based Muslim Spiritual Directorate (MSD) of Ukraine, told the QHA news agency that “100,000 Muslims from Crimea and the Donbas have moved to the territory under the control of the Ukrainian government”. These people need assistance because they lack resources on their own, because “in Ukraine there are not very many wealthy Muslims”, and because foreigners and foreign Muslim organizations have not done anything to help, he said.

Said Ismagilov also explained that MSD had not been in contact with the MSD in Crimea since the Russian annexation. “We know that they are harshly controlled by the authorities and that definite rules have been imposed on their existence. Therefore, we do not have any ties with the Crimean muftiate lest such contacts make things worse for the Muslims of Crimea”.

The ICC prosecutor’s report also concludes that shelling by both sides in eastern Ukraine and Ukraine’s detention of Russian military personnel there “points to direct military engagement between Russian armed forces and Ukrainian armed forces that would suggest the existence of an international armed conflict.” Russia has repeatedly denied its military are involved in the conflict, despite overwhelming evidence documented by international observers, journalists, and volunteer investigative groups, such as Bellingcat and InformNapalm.

For example, in November, a volunteer initiative InformNapalm presented its database of Russian military units identified in Ukraine, which is the result of two years of work. The group has proved the participation of 75 Russian operating military units in the war in Ukraine. Each record has a link to a detailed investigation behind each case, it’s available at http://russian-presence-in-ukraine.silk.co.

Bensuda’s report was released as part of an annual accounting of the preliminary investigations that ICC investigators have conducted in 2016. Under the court’s rules, if the prosecutor concludes there is enough evidence to merit a full investigation, then he or she must seek court authorization.

The International Criminal Court in The Hague has accepted the evidence of Russia`s war crimes committed amid the conflict in Donbas, Ukraine`s prosecutor general Yuriy Lutsenko was quoted by Interfax as saying. ”Yesterday, at the ICC prosecutor’s office we saw the evidence that Russia sent its regular troops against our forces near Ilovaisk, they violated an arrangement on the green corridor for the retreat of our military, who have been outnumbered 18 to 1 sometimes,” Lutsenko said.

Ukraine provided evidence of Russia`s extrajudicial executions, tortures, kidnapping, summary executions on the spot, the prosecutor also claimed. “All these acts constitute war crimes and offences against humanity. Our evidence was considered very solid. The official ICC and the prosecutors’ office procedures will follow. They might take a long time,” Lutsenko said. The Russian minister of defense, 18 generals, two admirals, and several other members of Russia`s armed forces may be accused of unleashing the aggressive war against Ukraine and violating the Geneva conventions.

A day after The Hague-based court’s prosecutor said Russian forces were in fact fighting in eastern Ukraine, Moscow formally withdrew from the International Criminal Court. Russian President Vladimir Putin ordered the Foreign Ministry to take the move in a decree signed on November 16. The Ministry described the work of the court as “one-sided and inefficient”, and said it “did not live up to the hopes associated with it and did not become truly independent”. Russia signed the treaty to join the court, known as the Rome Statute, but the Russian parliament never ratified the treaty.

Following that, Amnesty International said Russian President Putin’s order appeared to be directly linked to the ICC prosecutor’s statement. “It is hard not to see this as an attempt by Russia to undermine the progress towards international justice”, said Sergei Nikitin, director of Amnesty International Russia. “This announcement appears as nothing but contempt for the aims of the ICC, putting an end to impunity for genocide, war crimes, and crimes against humanity, and is an affront to all victims of these appalling crimes”, he was quoted as saying.

Amnesty International also added that it had documented possible war crimes committed by Russian military during the ongoing conflict in Syria. “As Russia had not ratified the Rome Statute, little will change in practice; however, the decision is an alarming indication of Russia’s unwillingness to cooperate with international justice systems”, Nikitin explained.

According to Ukrainian commentator Vitaly Portnikov, Putin might have avoided all these problems, if he had adopted a strategy like Turkey in Cyprus, which is intervening but not annexing the territory. Instead, Moscow annexed the Ukrainian peninsula in the name of defending Russia’s “compatriots” and in that way Russia not only violated a fundamental principle of international law but assumed total responsibility for everything that is taking place on the peninsula since the annexation.

Portnikov says that ICC prosecutor’s report “is not simply a formal conclusion. It is something that any government will have to take into consideration if it is thinking about closing its eyes to Crimea and normalizing relations with the Putin regime”. It appears that the decision of the International Criminal Court in The Hague will be not the only decision on this issue.

In addition, the UN resolution confirmed the territorial integrity of Ukraine and denounced an attempt to annex the Ukrainian peninsula, as well as called upon Russia to uphold its obligations under UN law as an occupying power and end abuses against residents of Crimea, release Ukrainians who were illegally detained, and revoked the banning of the Crimean Tatar Mejlis.

The document also urged Moscow to grant international human rights mechanisms, in particular the Human Rights Monitoring Mission in Ukraine, unimpeded access to Crimea in order to monitor the human rights situation and asks the United Nations High Commissioner for Human Rights to prepare a separate thematic report on the situation in the peninsula.

The approval of the UN resolution is planned at the plenary meeting of the UN General Assembly in December 2016. We need to remind that in 2014, following Russia’s illegal annexation of Crimea, the UN had adopted Resolution 68/262 on the territorial integrity of Ukraine, which was supported by 101 countries.

Since the annexation, Crimea has been turned by Russian into a military base with nuclear missiles, which was unthinkable three years ago. Therefore, this issue remains a particular concern for the West not only as a question of Ukraine’s territorial integrity, but also as matter of global security in the region. After the ICC prosecutor’s report was published, it became clear that the West’s stance on the armed conflict in Ukraine will not change, the sanctions against Russia will remain, but the Normandy format of talks will stay as well as a door to finding compromise. Moscow’s attempt to destabilize Ukraine has received a clear response, an economic pressure. The Kremlin is not interested in this situation, therefore, we can expect further Russia’s pressure on the EU through its friendly political forces in member-states.