History of Ukraine: Taras Shevchenko or the first revival 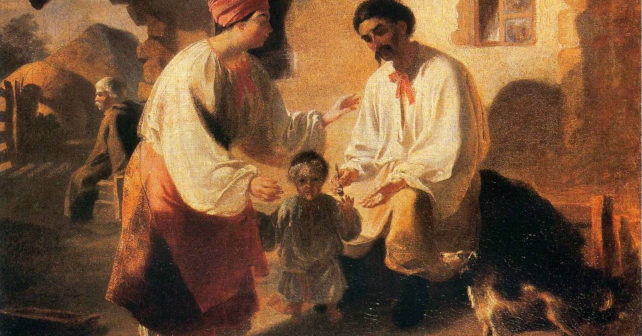 Some trivia about Ukraine on the 29th anniversary of country’s Independence by George V.Pinchuk. Taras Shevchenko or the first revival. Part 4. It is difficult for an amateur like me to write about the history of Ukraine of the 19th and the 20th centuries, because it becomes very eventful and highly branched. I will try to highlight only a few most important personalities and movements.

After Kotlyarevsky, the Ukrainian literature – poetry, prose, and drama – continued to exist and grow, even though the literary Ukrainian language was not taught at any school in the “Russian” part of the country and taught very little in parochial elementary schools in the “Austrian” part. In the first half of the 19th century Ukraine was blessed by the person of Taras Hryhorovych Shevchenko, the nation’s most talented and prolific poet and almost legendary spiritual leader.

Shevchenko was born in 1814, in a village of Moryntsi in central Ukraine, to the family of a serf. (The children of serfs were themselves serfs by the law.) His father died when he was little, soon followed by the young Taras’s mother. The orphaned boy earned his daily bread by working for a local church deacon who taught a parochial school. Taras was not a student at that school; his duties included only cleaning and bringing water from a well. Yet, he very soon learned to read and write, and amazed everyone by his talent for sketching and copying paintings. As a teenager, he became a personal servant to a a rich aristocrat V. Engelhardt, who took him to St. Petersburg. There, the young prodigy was ransomed from serfdom by a group of outstanding Russian artists, including N. Ge and K. Briullov. Shevchenko was admitted to the Imperial Academy of Fine Arts, and soon became a dandy with a reputation of a jovial drinker and lady killer.

Yet, all of a sudden, a book by Shevchenko’s poems, titled “Kobzar” (“a kobza player,” kobza or bandura being a string instrument used by vagrant folk singers and storytellers), was published in 1840. It was like an explosion. All poems were written in Kotlyarevsky’s real, living, breathing, beautiful Ukrainian language. They were about the history of Ukraine, especially about the life and accomplishments of the Ukrainian Kozaks of the old days before the Sich was demolished; about the beauty of the Ukrainian nature, and the fate of the Ukrainian peasantry. The general tone of the “Kobzar” was much like the tone of the Western European Romanticism writers and poets. Some of the poems included characters like mermaids or werewolves. The “Kobzar” was followed by a long poem called “Haidamaky,” about the revolt in the “Polish” part of Ukraine in 1768; there, Shevchenko begins to soar above the particularities of history, reflecting on such eternal problems as the human sense of belonging, memory, gratitude to ancestors etc.

At that time, Shevchenko became a member of a secret society called the Brotherhood of St. Cyril and Methodius. Other members of the society included writers and historians M. Kostomarov and P. Kulish. The society was one of the many “Pan-Slavist” organizations that blossomed all over the Slavic world in the first decades of the 19th century, being especially strong where the Slavs had no state of their own – in Austria and in the Balkans. The society members were uncovered and arrested in 1847. They were charged in separatism, although in fact their goal was a kind of “federalization” rather than separation of Ukraine from the Russian empire as a state. All members except Shevchenko received rather mild punishments. Shevchenko, however, personally infuriated Tzar Nicholas I, because a search found in his apartment a manuscript of a poem titled “A Dream.” There, Shevchenko made an extremely grotesque portrait of the Russian royals, especially of the Tzarina whom he compared to a “dried foam mushroom, faint and jumping on her long bony leg.” The poem also characterized the Tzar Peter I and the Tzarina Catherine II like this:

“That’s the First – he who crucified our Ukraine,
And that’s the Second – she who delivered the blow of death to our widowed and orphaned motherland.”

Shevchenko was sentenced to life in exile. He was stripped of all his Academy privileges, made a private of the Russian army, and sent to a garrison in Kos-Aral in Central Asia, near the shores of the Aral Sea. Tzar Nicholas personally wrote on Shevchenko’s file that “this man must be under the strictest surveillance all the time, and it is strictly forbidden to him to write or draw anything.” The first few years of the exile were not overly tough on the poet because of his popularity among the soldiers and officers as an artist, and also because of the friendship with a famous natural scientist Karl Ernst von Baer, who took Shevchenko to his voyages over the Aral Sea shores as a sketch artist and painter. However, for the violation of the Tzar’s prohibition to draw, Shevchenko was transferred to a fortress (essentially, prison) in the mouth of the Syr Darya river. There, his health was completely ruined. He was pardoned and returned to St. Petersburg in 1857 but died of heart failure and liver cirrhosis only three and a half years later, one day after turning 47. His last portraits show a very sick man who looked like he was in his late 60s.

In the exile, Shevchenko actually wrote poetry prolifically. He wrote his famous long poems, “The Caucasus,” “The Servant Girl,” “The Convict,” “The Neophytes,” “The Fool of God,” and others; a drama, titled “Nazar Stodolya,” a number of short stories (the only part of his heritage written in Russian), and a large collection of short poems, of which the most famous, perhaps, are “If You Only Knew, You Children of the Nobles,” “I Have Grown Up in a Foreign Land,” “I Don’t Regret About my Golden and Dear Youth,” and a number of poetic renditions of the Bible (Isaiah, Hosea, Ezekiel). My own favorite is perhaps his poem called “To the Dead, and the Living, and to Those Who Are Not Yet Born,” where Shevchenko bitterly writes about the unnecessary squabbles among Ukrainians who want to show each other how much they know of what their foreign spiritual leaders teach them. He concludes the poem by a loud cry coming directly from his suffering heart: “EMBRACE EACH OTHER, my brothers… I beseech you… I beg you!” (Not that Ukrainians ever listened. Hardly any other nation in the world is so divisive and self-hating. They say, “where there are two Ukrainians, there are three factions, each with its own Hetman.”)

Shevchenko’s work as a poet was continued after his death by Lesya Ukrayinka (real name Larysa Petrivna Kosach) in the “Russian” part of Ukraine, and by Ivan Franko in the “Austrian” part. In parallel, the late 19th century witnessed the birth of the Ukrainian Nationalism, a huge and very complicated movement with large practical implications.

(for illustration used a reproduction of the oil painting Peasant Family by Taras Shevchenko, 1843)

No Responses to “History of Ukraine: Taras Shevchenko or the first revival”