Identified: three more Russian military units that participated in the aggression against Ukraine 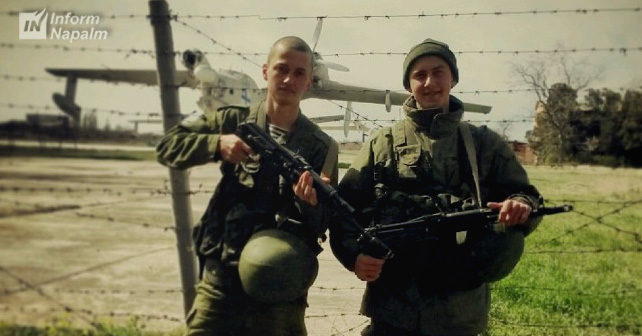 Based on the results of this investigation the InformNapalm interactive database will be updated and expanded with more evidence of the Russian aggression against Ukraine. It currently features materials about 99 military units of the Russian Federation which sent their regular servicemen to the war against Ukraine. After the publication and translations of this investigation, 3 more military units will be added to the database taking the total number over 100 Russian military units. This is the most comprehensive open database in the world featuring evidence of Russian military aggression collected through open-source intelligence. The database is available for viewing and distribution in 6 languages, whereas most of the investigations have been translated into 10 more languages. It is noteworthy that this extensive and painstaking work has been carried out and continues to be carried out by volunteers without support from any government agencies or institutions, as well as without funding from any large international donors. The project is being implemented independently by InformNapalm volunteers and supported by the readers.

Background information about the relevant military units of the Russian Army

It should be noted that servicemen of these three military units have previously featured in the OSINT investigations of InformNapalm dealing with the Russian operations in Syria. However, these units were not included in the general interactive database, since their participation in the aggression against Ukraine was not established or confirmed. For example, servicemen of the 727th Marine Brigade (military unit 20264) were spotted by InformNapalm in 2017 while performing covert military missions on the border between Syria and Turkey. And in 2018, a former contract serviceman of military unit 20264 Murat Yesaliev was spotted in Syria, where he performed combat missions as a gunner of a tank company at Wagner private military company, a proxy force of the Main Intelligence Directorate of the General Staff of the Russian Army. Previously we also found that the support vessels of the 205th Squadron of Support Vessels of the Russian Black Sea Fleet (military unit 43535) were involved in the Syrian Express logistics operation.

A photograph of the medal for the occupation of Crimea posted on a Russian social network by a user nicknamed “Made in UssR” provided the starting point of our new OSINT investigation. 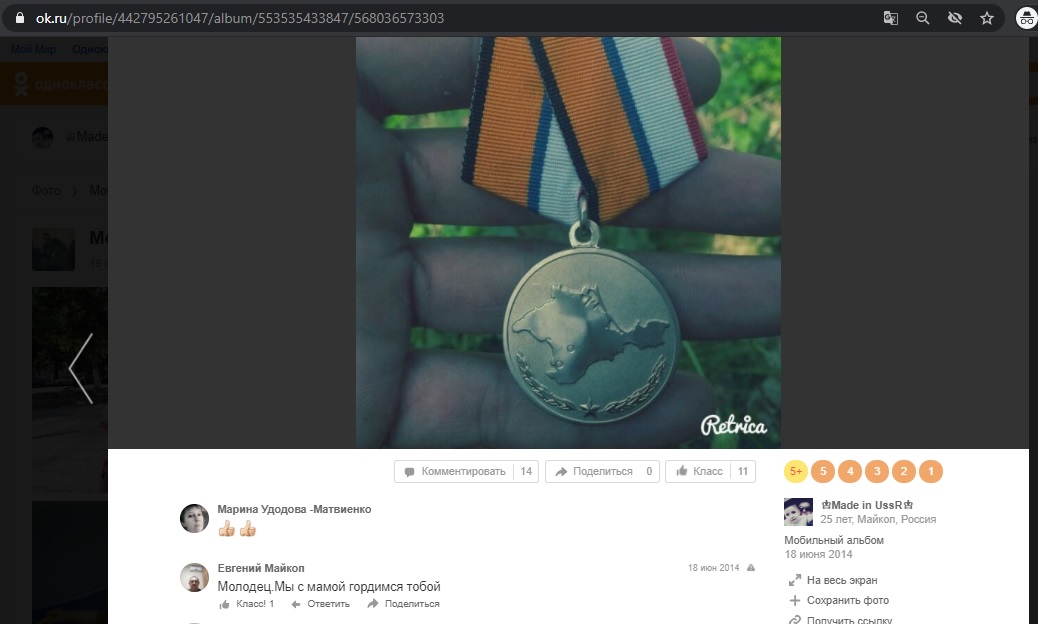 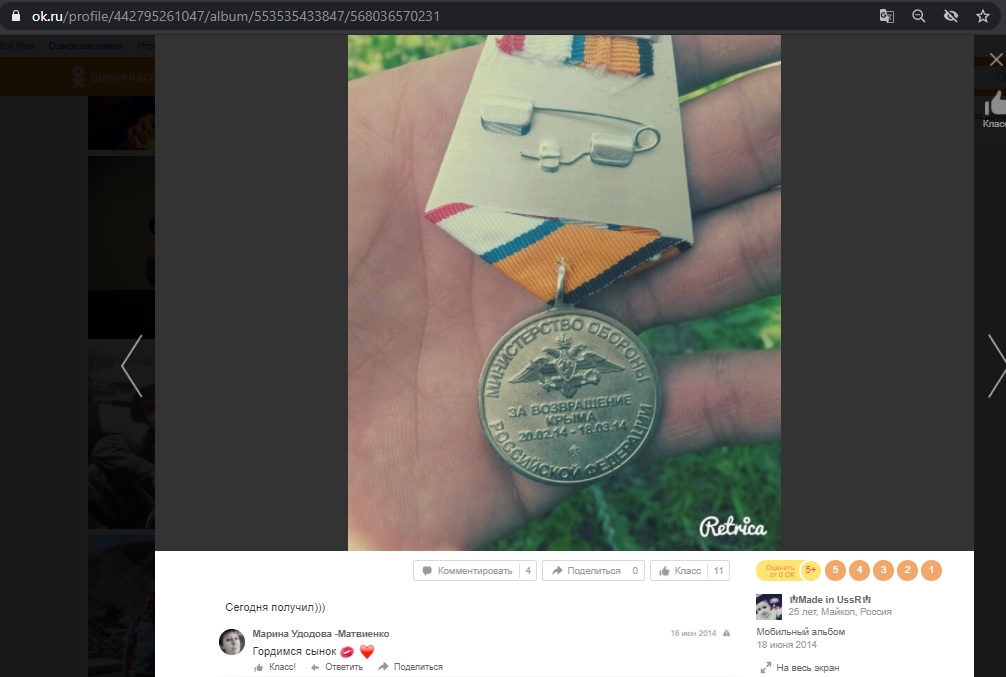 Obviously realizing that he was involved in a war crime, the Russian invader hid behind a nickname. However, after examining his page and the pages of his friends and relatives, we established his full name and place of service.

Step-by-step identification of the Russian occupier

Under the photo of the medal, there is a comment by Marina Udodova-Matvienko: “We are proud of our son.” Apparently, this is the mother of the suspect. Marina Udodova-Matvienko closed her account to non-friends. However, she did not notice that the photo album remained open for free viewing. The photographs and comments helped us supplement the information collected from the page of her son.

He was drafted for military service in June 2013, as evidenced by this post: “Going to Sevastopol tomorrow, marine.“ There is a comment on this status: “Good luck, Sasha.” So, his name is Aleksander. 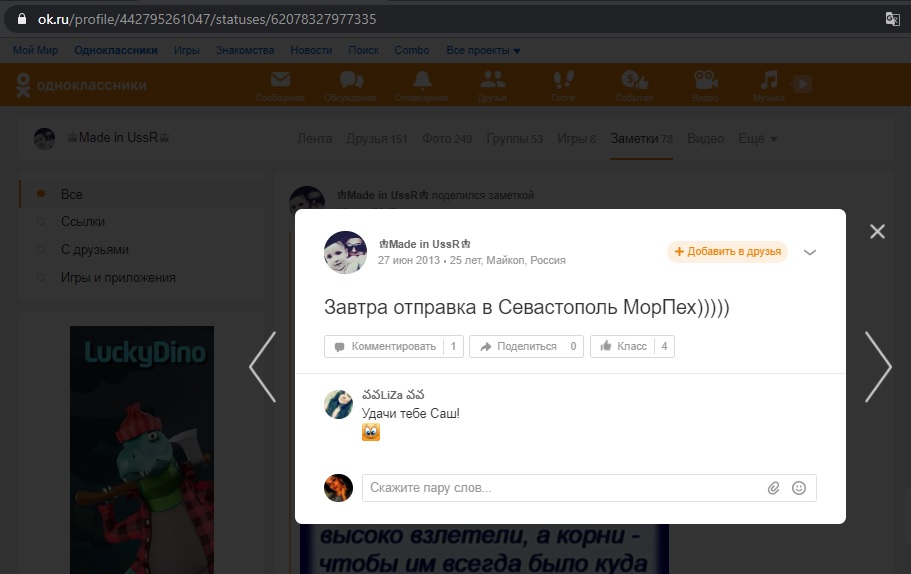 The name is confirmed by comments on the photographs in the mother’s album (1, 2, 3).

In the list of relatives, Aleksander indicated his father, his page on the social network is nicknamed “Evgeny Maikop” (where Maikop, obviously, is his place of residence). The father’s page is closed to viewing, but its URL gives us not only his first name, but also the last name – Evgeny Udodov. 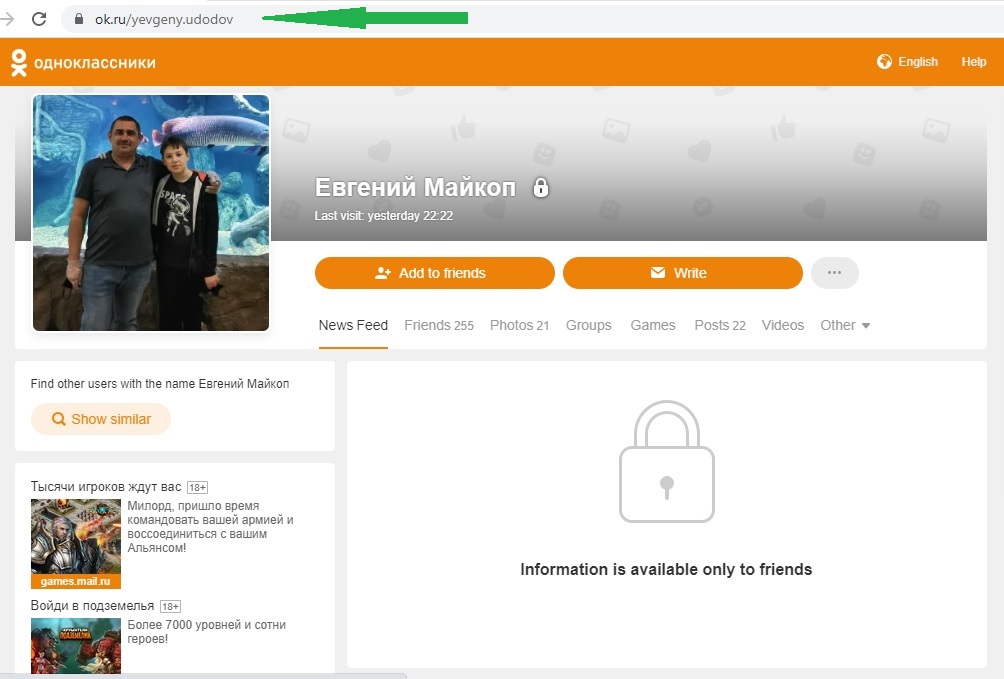 The surname and place of residence are additionally confirmed by a photograph of the letter of the Udodovs’ youngest son published in his mother’s photo album: 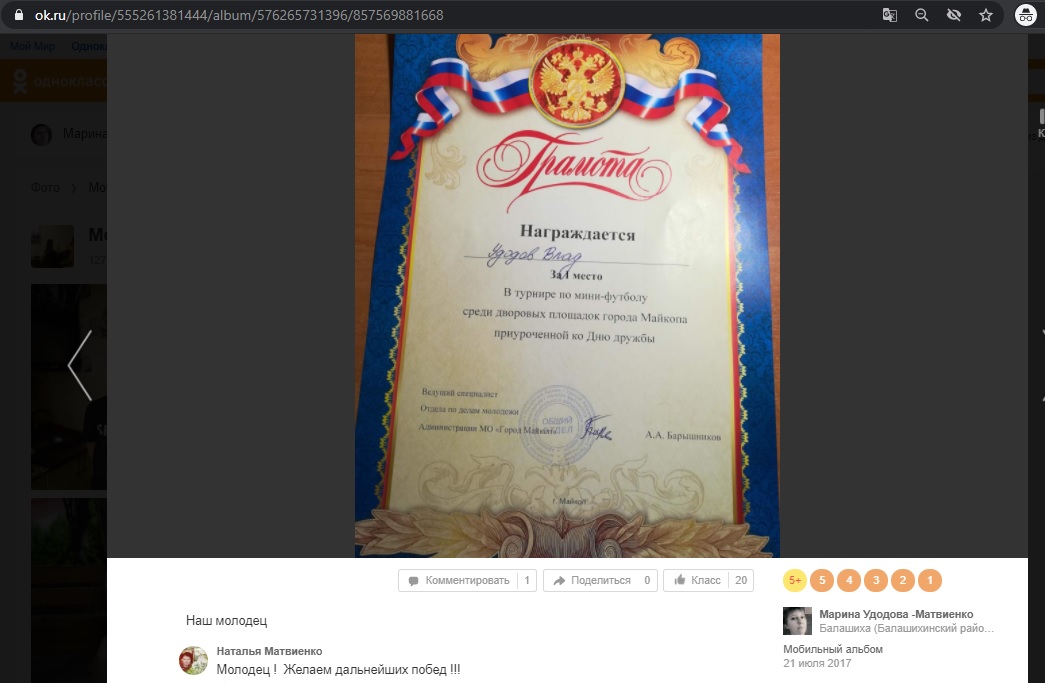 So, the full name of main subject of this investigation, awarded for the operation to seize Crimea, is Aleksander Evgenievich Udodov, born November 05, 1994,  in the city of Maykop.

As Udodov indicated on his page, he served in Sevastopol as a marine. The 810th Marine Brigade of the Russian Black Sea Fleet is based in Sevastopol, therefore, it was in this brigade that our subject began his military service.

However, already in November 2013, he informed his friends in the comments about his plans to sign a contract to serve in the Marine Battalion in Temryuk. And in December 2013, under a photograph, the mother writes about her son’s new service location. 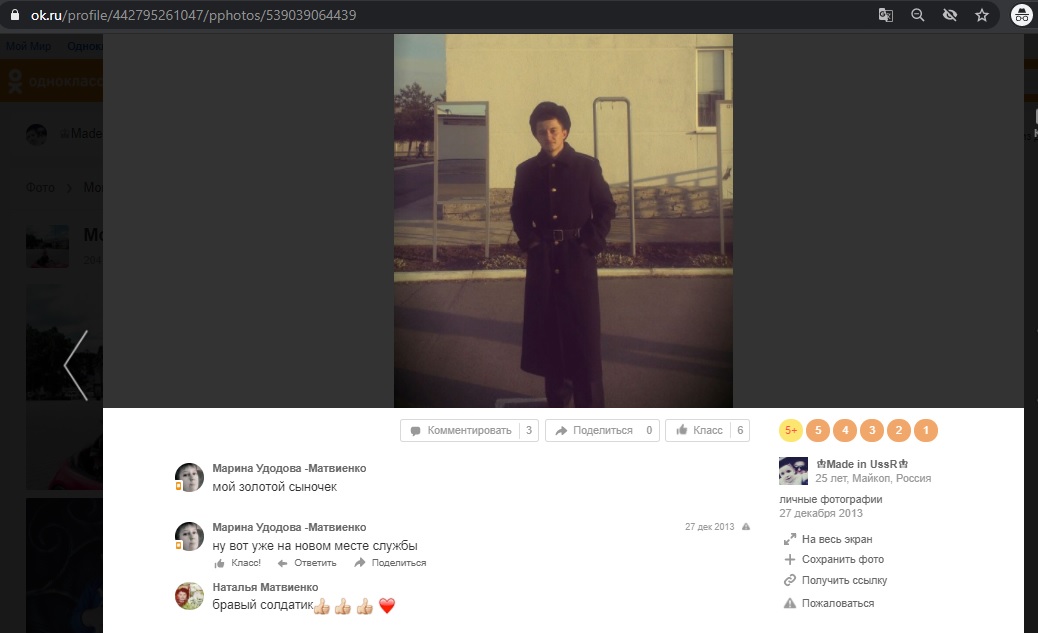 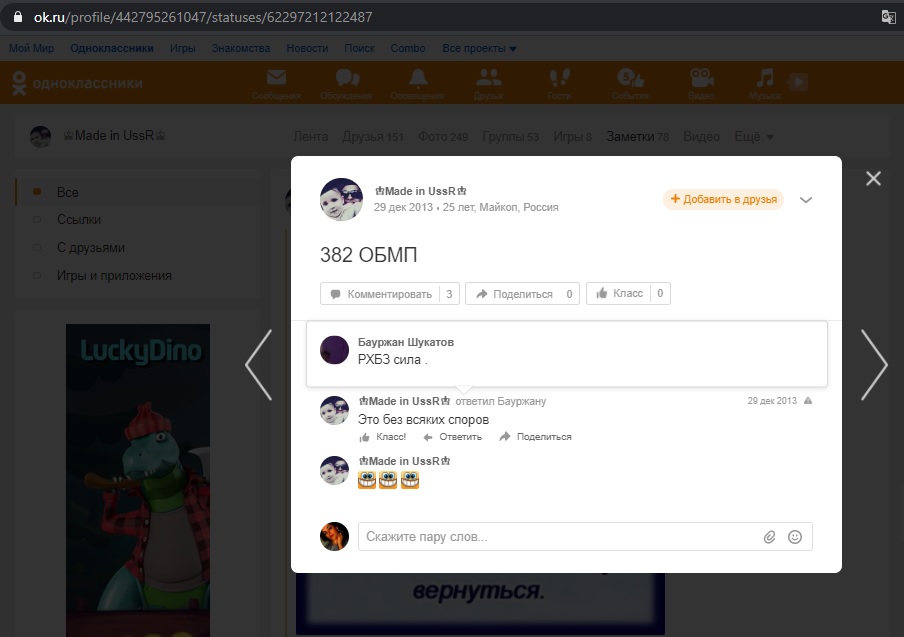 The 382nd Marine Battalion of the Black Sea Fleet (military unit 45765) is based in the city of Temryuk, on the Azov coast of the Krasnodar Krai. It is part of the 810th Marine Brigade (military unit 13140, based in Sevastopol, temporarily occupied Crimea). So, Udodov received a medal for the occupation of Crimea performing combat missions as part of the 382nd Marine Battalion.

Sealifting of marines from Russia to Ukraine on a ship from the 205th Squadron of Support Vessels of the Russian Black See Fleet.

On the eve of the capture of Crimea, on February 23, 2014, Udodov posted a photo taken on board of the ship (screenshot). In the comments he was asked: “Where are you?” … “We’re going to Sevas on a box,” Udodov replied (Sevas is the slang name for the Ukrainian city of Sevastopol). 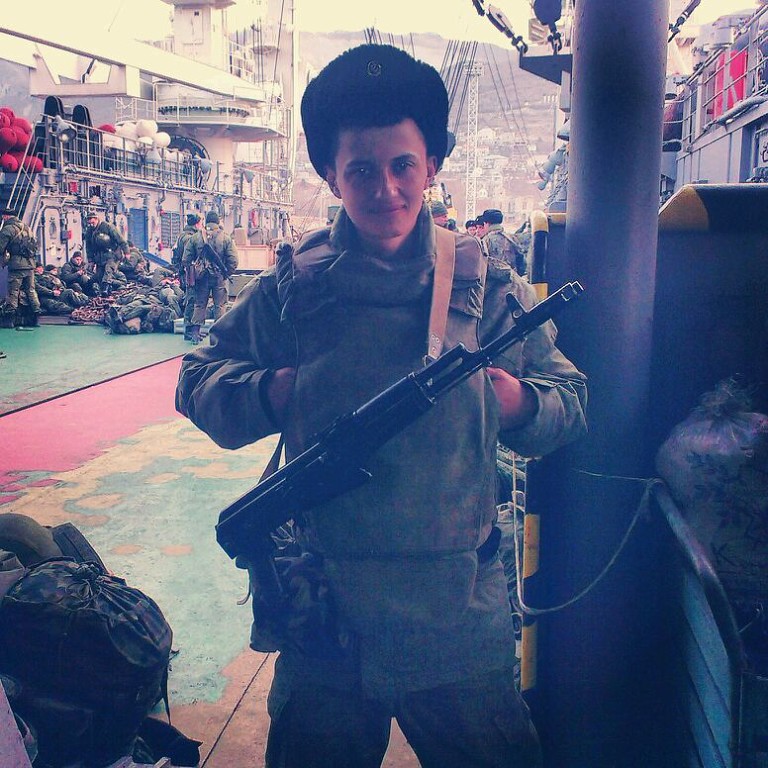 InformNapalm OSINT researchers identified the ship that transported marines from Russia to Crimea. This is a KIL-158, an anchor handling tug supply vessel (AHTS), it is part of the 205th Squadron of Support Vessels of the Russian Black Sea Fleet, military unit 43535 based in Sevastopol, temporarily occupied Crimea.

Here is a photo of KIL-158 from syria.mil.ru site for comparison with Udodov’s photo: 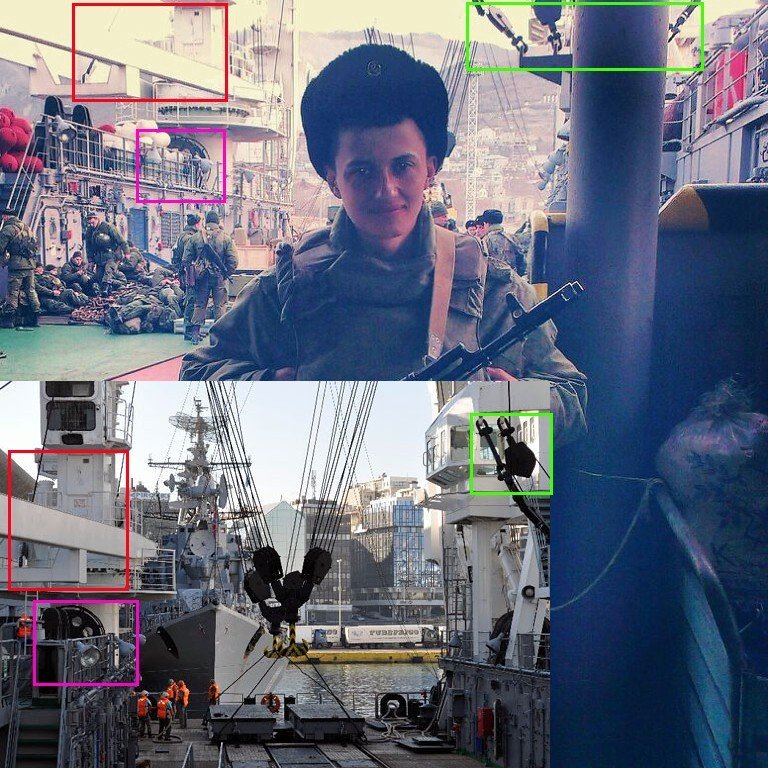 AHTS vessels are used for the construction of bases and ports, for the installation of dead anchors, mooring buoys and breakwaters, for laying cables and other underwater work, as well as for repair work. However, as we can see, the Russians also use such vessels for the covert sealifting of manpower during the seizure of foreign territories. At the time of the beginning of Russian armed aggression, Captain of 1st Rank of the Reserve Sergei Borisovich Zinchenko was in command of the 205th Squadron of Support Vessels, as evidenced by publications in the Russian media of December 2013 and April 2014. 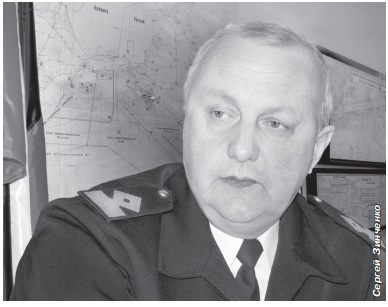 At the end of April 2014, Zinchenko was appointed to another position – the General Director of the Crimean Sea Ports state enterprise.

Captain of 1st Rank Nikolai Vasilyevich Perun was the captain of the KIL-158 support vessel from the moment of its commissioning in 1989. In the fall of 2014, under his command, KIL-158 lifted the large anti-submarine ship Ochakov, which the invaders sank to lock Ukrainian ships in the bay of Donuzlav during the special operation to seize Crimea.

On March 16, 2014, on the day of the so-called “referendum” in Crimea, Udodov posted a photo with the caption “we took the height” (original photo). In this photo, the occupier aims his weapon at the buildings below. This photo is very symbolic. It clearly demonstrates the Russian lies about the “peaceful vote” of Ukrainian citizens in Crimea at the so-called “referendum” which was actually held by the invaders at gunpoint: 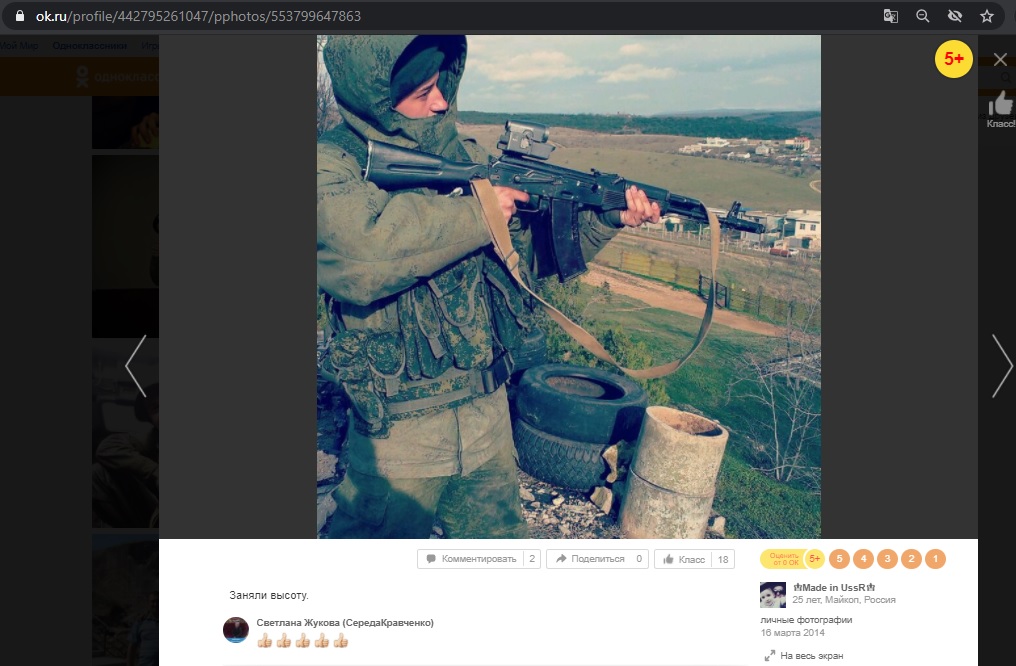 Note: so far we have not been able to establish the exact geolocation of this particular photo. If our readers have recognized the area, please send us a private messages on facebook or twitter.

The following photo from Udodov’s album was taken at the Ukrainian airbase in Novofedorivka against the background of the Ukrainian Be-12 aircraft, coordinates 45.086442, 33.579172 (screenshot): 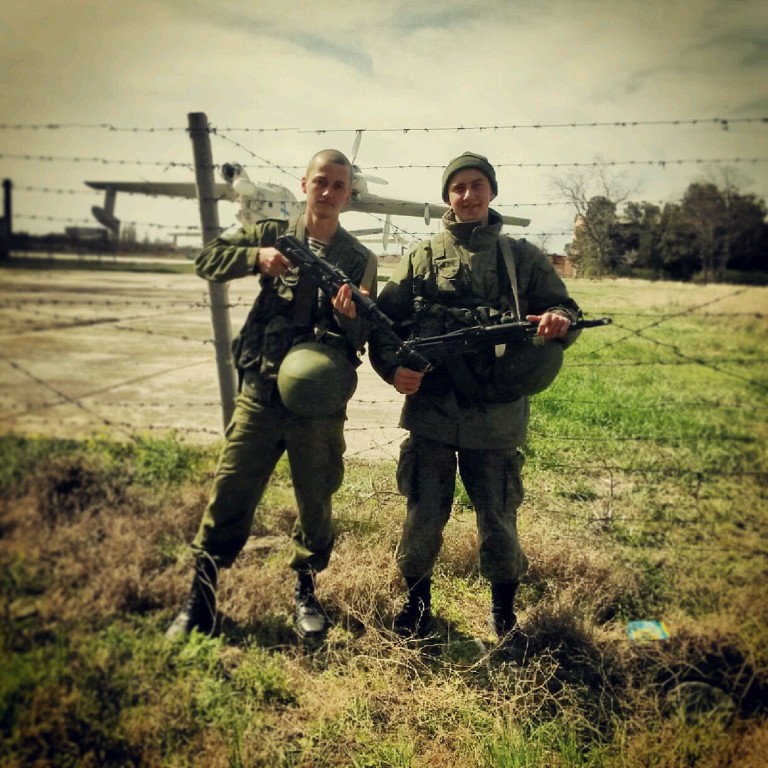 This is the place on Google Maps: 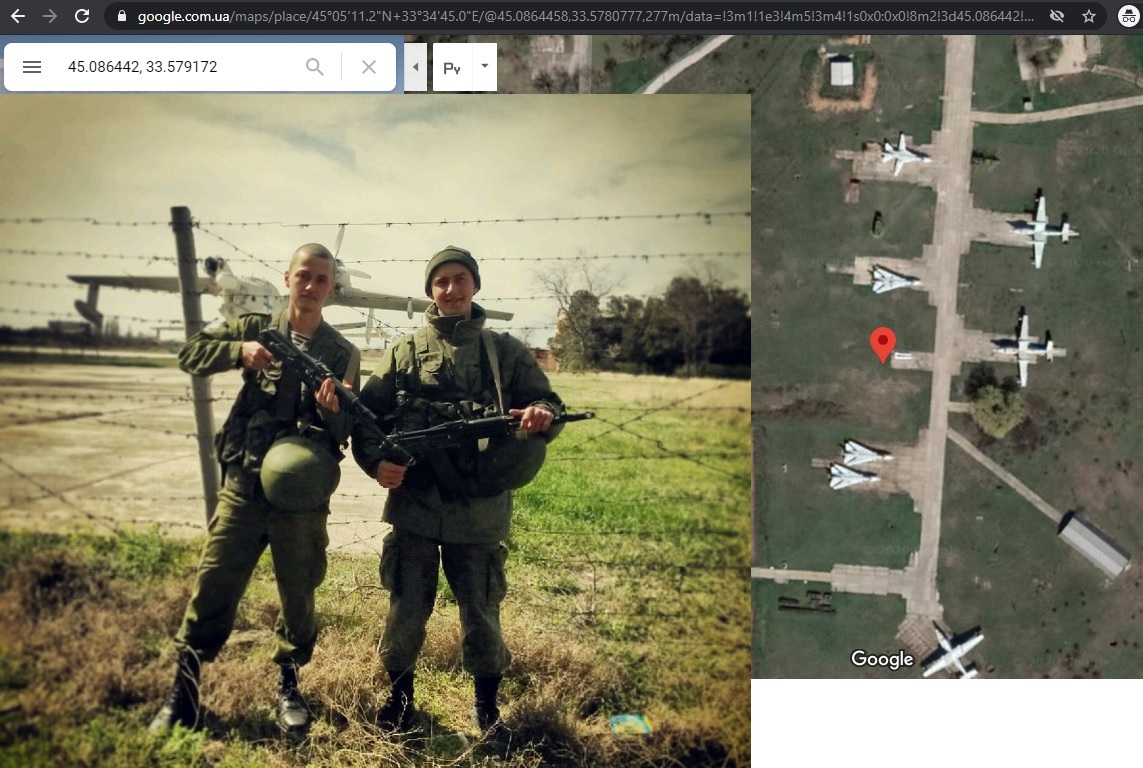 According to his mother, as of 2015, Udodov had the rank of a sergeant; and as of 2017, he lived with his family in Temryuk.

Command of the 382nd Marine Battalion 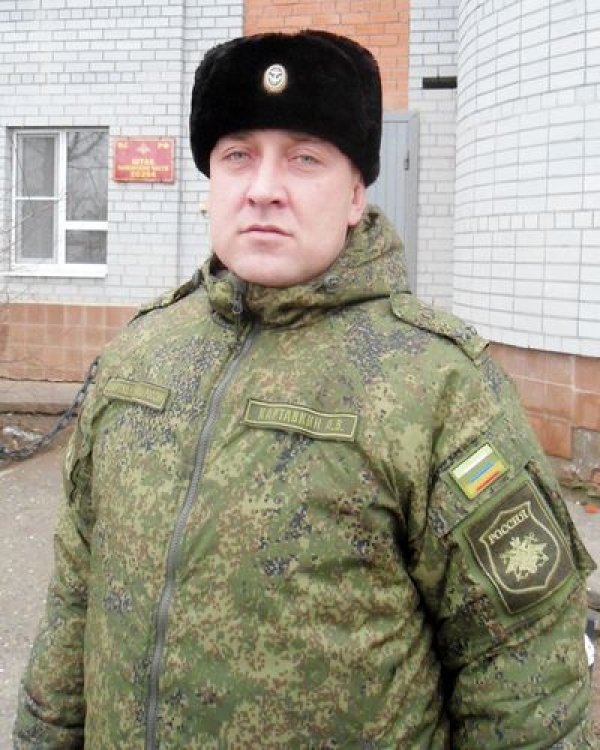 The article by Radio Liberty titled How Kerch was seized: chronicle of the events of 2014 in particular deals with the blocking of the Ukrainian military unit A-0883, with the participation of Kartavkin: 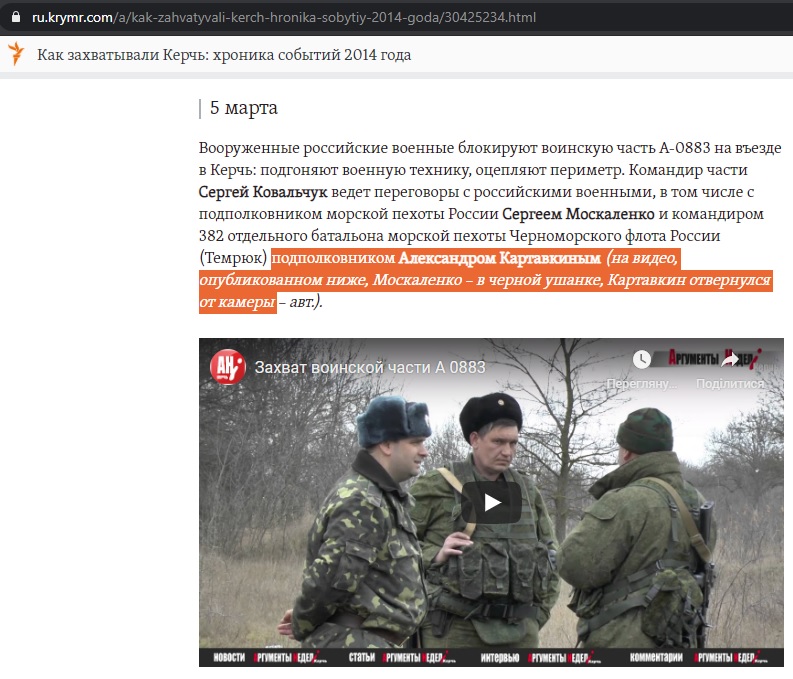 Investigations confirmed that Kartavkin was also awarded a medal for the occupation of Crimea. At the parade in 2016 in Astrakhan at a new duty station (in 2015, Kartavkin took command of the 727th Marine Battalion, military unit 20264, based in Astrakhan), in the video of the celebration of the Marines Day we see him with a medal for the occupation of Crimea [saved video, screenshots and photos: 1, 2,3].

Studying information about Aleksander Kartavkin, we found a video (archiveed video), in which the deputy commander of the 3rd Platoon of the 2nd Company of the 727th Marine Battalion Ilshat Fatkhutdinov was also recorded with a medal for the occupation of Crimea. It should be noted that the Ukraine’s Chief Military Prosecutor’s Office included 727th Marine Battalion on the list of units redeployed to Crimea during the invasion operation. The information we found provides a stronger confirmation to the data of the Ukraine’s Chief Military Prosecutor’s Office, for the first time supplementing textual testimonies with photo and video evidence of the involvement of the servicemen of this unit in the invasion of Crimea. 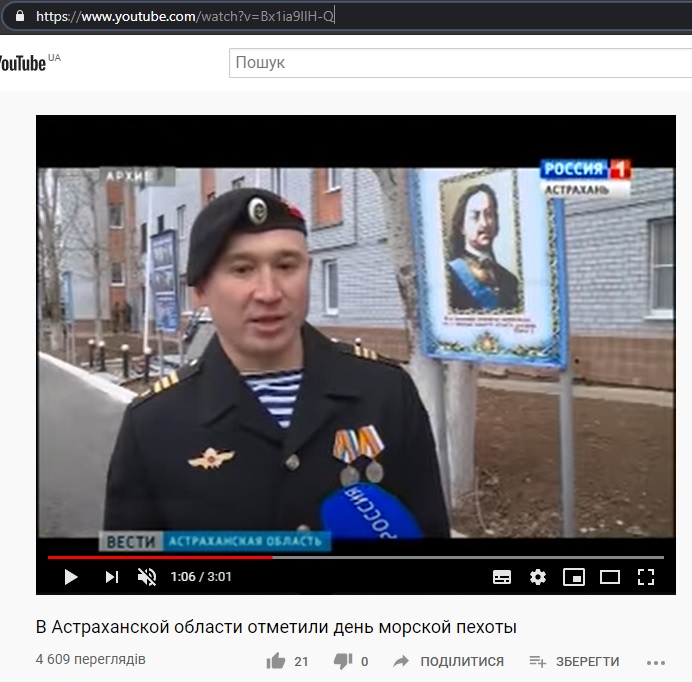 Pictured, Ilshat Fatkhutdinov with a medal for the occupation of Crimea, source.

We appeal to the Ukrainian law enforcement agencies to carry out all the necessary legal proceedings regarding the established Russian military men and units of the Russian Army participating in the ongoing aggression against Ukraine.

No Responses to “Identified: three more Russian military units that participated in the aggression against Ukraine”