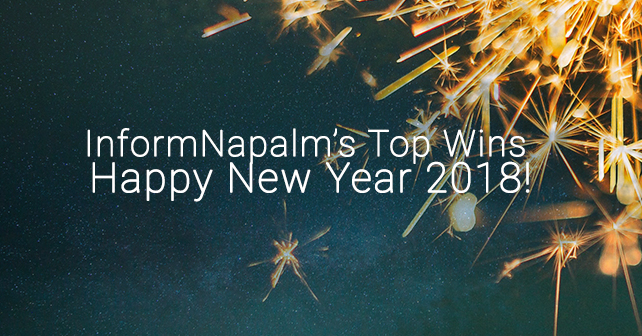 Dear friends, we wish you all a happy New Year! We have fought through yet another year. And we lived it united with and by Ukraine…

Activists from Germany and Georgia, Sweden and Bulgaria, the Czech Republic and Poland, Belarus and Turkey, the United States, France and many other countries, we are the InformNapalm volunteer intelligence community.

We speak different languages, we live thousands of miles apart, we have different religious beliefs, but we share an acute sense of justice and a strong desire to stop Russian aggression. And in 2017 we achieved quite a lot.

We conducted 313 new investigations gathering a wealth of strong evidence of Russian aggression against Ukraine, Georgia and Syria. We made and published 2,470 translations into different languages. We identified another 11 (out of 44 total) types of the newest Russian weaponry in Donbas, and eight more (out of 83 total) military units of the Russian Armed Forces that sent their servicemen to Ukraine.

We also did very well in strategic communications and public diplomacy. We delivered keynotes at international forums and conferences on security in Estonia and Lithuania, and presented materials of our investigations in the USA and Germany. We held more than 120 meetings with journalists, experts and diplomats. InformNapalm was cited in thousands of media publications. Our reports were demonstrated at the OSCE Parliamentary Assembly sessions and were filed with the lawsuit of Ukraine against Russia in the European Court of Human Rights. During the year, we successfully thwarted the Kremlin’s information warfare operations and published irrefutable evidence of Russian aggression.

But our fight continues, and a lot of effort is still needed for a common victory. Each of you can join our community and become part of the InformNapalm team. Together we will achieve more! And let the new year 2018 bring us our common victory!