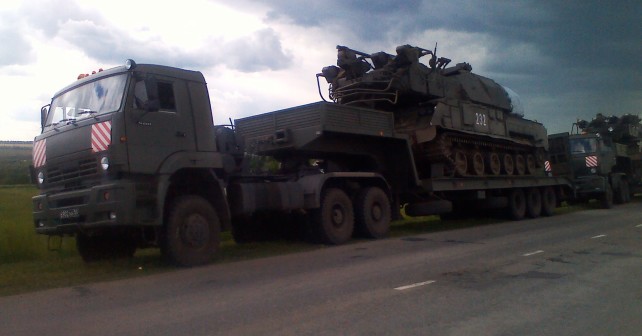 On May 24, 2018, the Joint Investigation Team (JIT), which has been investigating the crash of the MH17 passenger flight, presented additional results of the investigation. It announced that the Boeing-777 passenger jet operated by Malaysian Airlines flying over the occupied territory of the Ukrainian Donbas on July 17, 2014 was shot down by a Buk transporter erector launcher and radar (TELAR)  surface-to-air missile system (SAM) belonging to the Russian armed forces.

The JIT “has concluded that the Buk TELAR with which Flight MH17 was shot down is from the 53rd Anti-Aircraft Missile Brigade from Kursk in the Russian Federation,” said Wilbert Paulissen, head of the Netherlands’ National Crime Squad, and added that “all the vehicles in the convoy carrying the missile were part of the Russian armed forces”.

This version is fully consistent with the findings and conclusions provided in a series of investigative reports by the volunteers of InformNapalm volunteer intelligence community.

Read the materials of InformNapalm investigations on MH17 here.

The Russian army, which seized Crimea, killed thousands of people in the Donbas and had a direct hand in downing of the MH17, will be part of the security measures during the World Cup in Russia. The championship final is scheduled for July 15, and two days later, on July 17, the world will commemorate the tragedy of the MH17 flight.

The body of this database deals with the facts of the large-scale Russian invasion of Ukraine: more than 1300 Russian servicemen from 89 units of the Russian armed forces and other law enforcement and security of Russia, as well as 44 types of Russian weapons and equipment, which could not have been captured from the Ukrainian army but were secretly brought to the Donbas.

We call on the world community to step up economic and diplomatic pressure on the Russian Federation and boycott the holding of the FIFA World Cup in Russia.