Russian Air Defense Officer Got a St. George’s Cross IV Degree: Was It for MH17 or Ukrainian Su-25 and An-26? 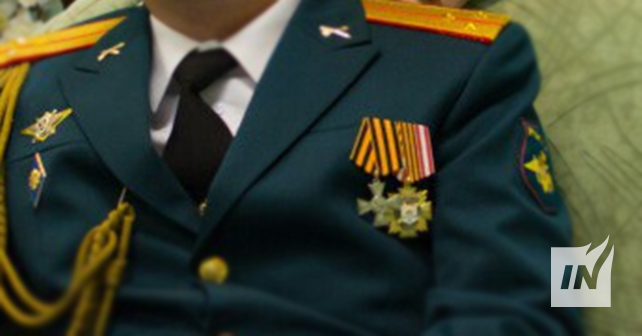 As usual, the volunteers of our community conduct OSINT investigations trying to find new evidence of the Russian servicemen’s participation in the war in Donbas. This time we have registered an interesting update in the social profile of senior lieutenant Konstantin Mishkin, the Russian officer from the 53rd air defense brigade. This data can shed the light on the tragic MH17 crash near the occupied town of Torez. We also believe that this information will become another point to discuss during interrogations of the Russian war criminals on the future tribunal hearings. 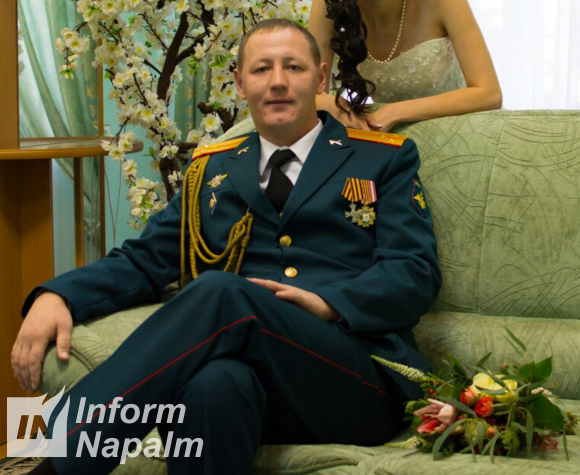 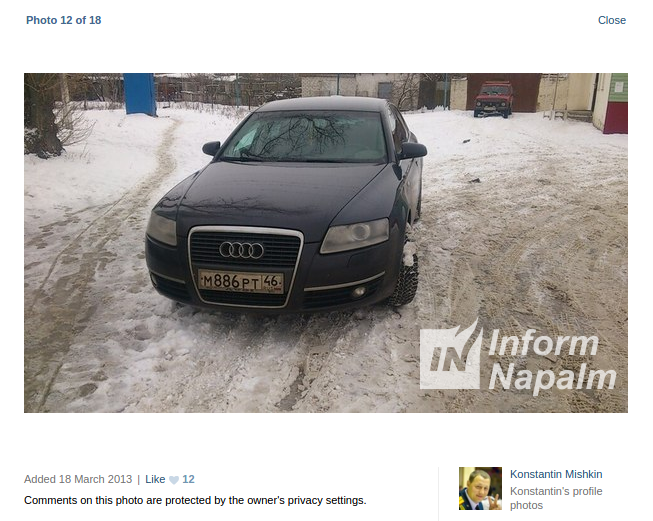 Serviceman’s collar insignia show his belonging to the air defense forces. Place of residence and the type of troops point us at the 53rd air defense brigade of the Russian Federation’s armed forces, which is also mentioned in the investigation team’s reports about MH17 crash.

Konstantin Mishkin studied at a military high school in the period between 2006 and 2011. 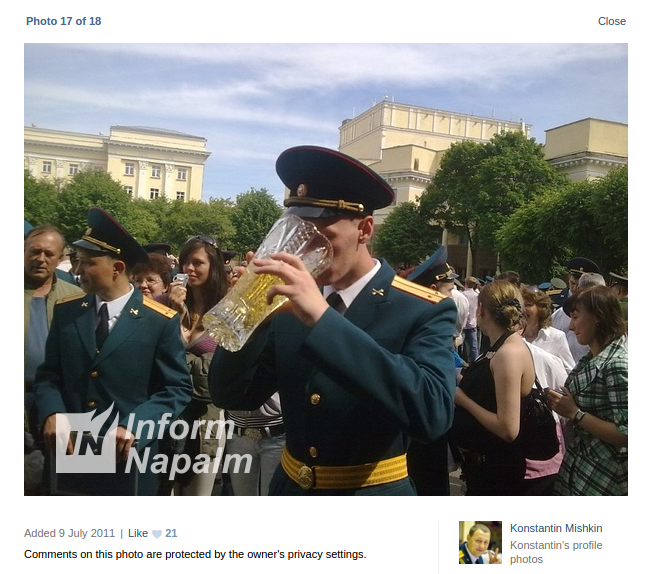 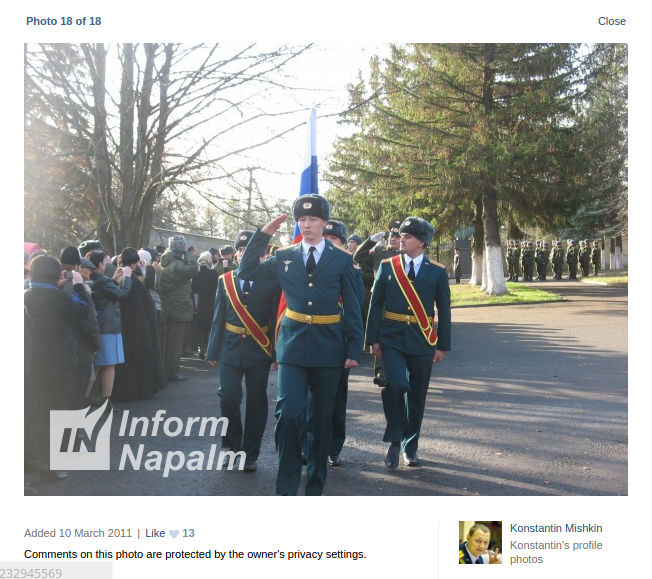 One of the pictures from his album shows a medal – Cross of St. George of IV Degree. This is a pretty valuable award of the Russian Federation. And a person can get it only gradually – from the lowest degree to the highest one.

It is noteworthy that this award is missing in the photos from the prom. But it appears in the pictures from the wedding which took place on October 10, 2015. It is obvious that the officer was awarded somewhen in between 2011-2015. 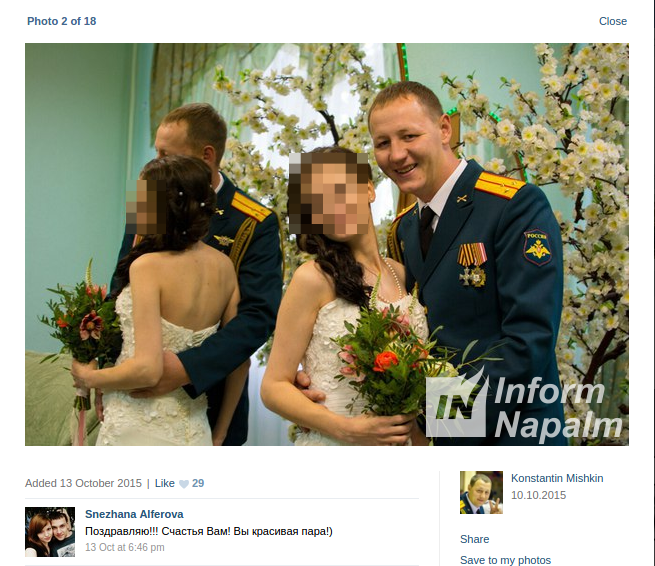 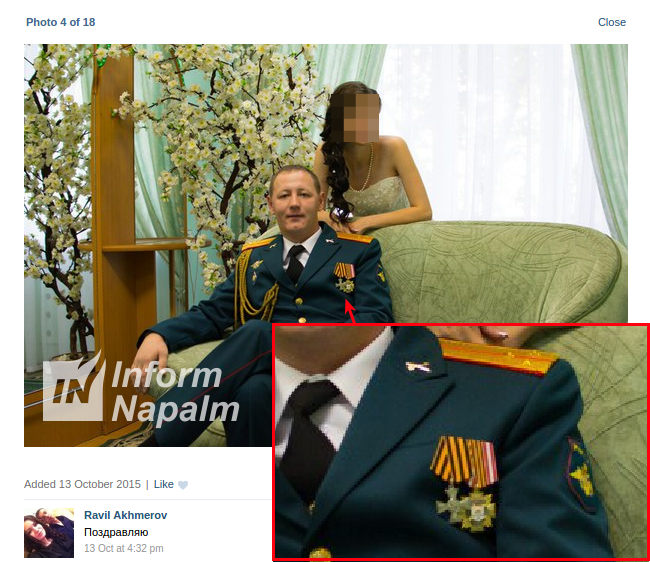 A serviceman (being in the rank of a soldier, sailor, sergeant, master sergeant, warrant officer or any junior officer) can get a Saint George’s Cross for:

The awarding is only possible from the lowest degree to the highest one.

And here a question appears: what were the feats or distinguished military service during the defense of Russia or in the territory of other countries which resulted in awarding of the officer from the 53rd brigade between 2011 and 2015? Was it downing a Ukrainian military aircraft or Boeing 777 (flight MH17)?

The current investigation was already published on the private Facebook page of our OSINT-expert Mikhail Kuznetsov on January 4, 2016, in order to check up the reaction of the Russian side. Despite the fact that the article had no wide media coverage, a couple of hours after the publication we noticed some urgent cleanup of the mentioned serviceman’s data and account. Later the account was restored with updated pictures. The photos with the medals were deleted and this can be an indirect confirmation of our hypothesis that Konstantin indeed participated in special operations in the war in Donbas.

Following the publication, the volunteers of InformNapalm were addressed by the Bellingcat journalist group with a request to hide the information gathered by us. The reason for this request was that they were going to publish their own report on MH17 crash. Taking into account that the information about the officer’s awards is now available only in the archives we’ve made and FSB has finished Konstantin Mishkin‘s photo album cleanup, we decided that there is no sense in deleting the found data. The gathered information will be investigated in detail and disseminated in the media in order to identify additional indicia of war crimes of the Russian armed forces in the Donbas. The Russian secret services by their panic actions provided us with additional facts and affirmed the proverb saying ‘liar, liar pants on fire’. Setting ‘pants’ of the Russian servicemen on fire, InformNapalm ensures the inevitability of punishment.

Both customers and executors of the war crimes should be known by sight and any classification of their actions (like anonymization of the data in reports or hiding their faces) only expands the room for manoeuvre for the Russian side. Thousands of people were killed during the war in Donbas, the crash of MH17 resulted in 298 victims more. We need to continue to act quickly, step by step unmasking every officer guilty of these crimes against humanity. Justice is not a dusty bag for non-public criminal cases, where everyone with a certain amount of money can erase himself from the blacklist. Justice is a public demonstration of the information available to the international community, which should unite its efforts in the uncompromising struggle against the aggressor, and punish those who are responsible for crimes against all norms of law and morality.

Please check out our other investigations regarding the MH17 crash:

2 Responses to “Russian Air Defense Officer Got a St. George’s Cross IV Degree: Was It for MH17 or Ukrainian Su-25 and An-26?”