Leader of the DNR Zakharchenko Is against Novorossia 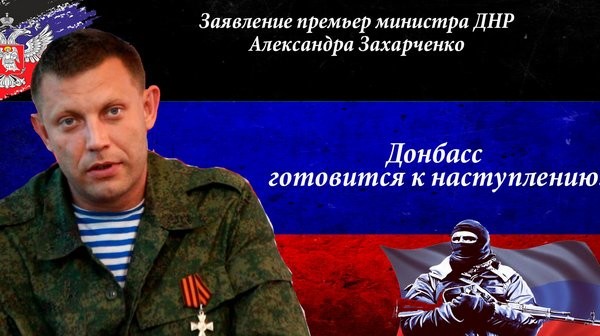 InformNapalm has previously described the criminal schemes going on in the so-called “Donetsk People’s Republic” (the DNR) in the article DNR’s Corruption Outrages its Own Officials. The editorial office of InformNapalm has received new information about the cases of lawlessness and anarchy among the people who call themselves the authorities of the “Donetsk People’s Republic”.

Here, we present a detailed report from the source in the DNR about the situation in Donetsk:

“On December 9, 2014, there were rumors about the arrest and taking into custody of [the DNR leader] Alexander Zakharchenko  by battalion commanders, who were extremely dissatisfied with his unsatisfactory performance. These rumors were not unfounded, as the basis of his policy was his desire to get all financial streams (including ones from humanitarian aid cargos) under his own control. It resulted in “the failure of the offensive operation on Kyiv” (“the command to attack was not given in time, while Armed Forces of Ukraine continued accumulation of military equipment at the borders,” – the official explains). This and a number of other factors caused and continues causing the Russian command’s extreme dissatisfaction with the actions of Zakharchenko, although, at the moment, he is free and doing well. Perhaps, the rumors about his arrest were exaggerated or hushed up.

I want to point out Zakharchenko’s special attitude towards the format of the existence of the new state. He is openly willing to sacrifice the creation of Novorossia in favor of the “puppet state DNR”. His initiative is supported by Denis Pushilin [a former leader of the DNR], who actively opposes Novorossia in mass media and advocates for giving Donetsk “a special status within Ukraine”. Citizens of the DNR through the media are strongly recommended to pay for all public services and utilities. Later, it became known that the [Donetsk] authorities receive a kickback from the sums of money transferred to Ukraine for public services. And when the head of the DNR announced about paying off loans to Privatbank, owned by [a Ukrainian billionaire]Ihor Kolomoisky, Kiev’s authorities gave him a standing ovation.

But the most outrageous part of Zakharchenko’s activity is his profiteering from humanitarian aid gathered by brotherly Russia. His actions are criminal towards the representatives of the regions of Russia, who themselves are affected by price increases, suffer from a lack of money caused by underfunding, but who, despite all those difficulties, have gathered so necessary for the population of Donetsk and Luhansk Oblasts goods that may, at least a little, help to postpone a humanitarian catastrophe. Under these dire circumstances, this precious humanitarian aid disappears immediately after crossing the border! However, the most amazing discoveries can be made if one traces the fate of this aid.

Firstly, most of the cargo goes to the town of Shakhtarsk where at warehouses it is repacked in packages labeled “Akhmetov’s Fund” and is being distributed on behalf of the local oligarchy in the towns and villages of the liberated areas of Donetsk Oblast.

Secondly,part of this aid comes into grocery stores and markets. The resulting revenue goes directly to Alexander Zakharchenko and Ihor Plotnitsky [head of the Luhansk People’s Republic]. Cheap drugs are distributed through pharmacies and hospitals, more expensive ones are sold at much a higher price to the hospitals, as well as in the “underground” drug stores, where there is no shortage of any drugs, however, the order can be made only by phone.

The position and fate of other members of the “national elite” of the DNR are also of a great interest.

On December 13, 2014, Sergey Danilov was arrested on his way to Boris Litvinov’s to discuss a unified monetary system of Novorossia and the possibility of introducing a “state” unified monetary unit. At the same time, with Mr. Surkov’s assistance, Zakharchenko stated his strong opposition to this project. Later, Litvinov himself was arrested and then released; Danilov was released much later.

The Minister of taxes and fees of the DNR with the nickname “Tashkent” is another prominent politician. He is a close friend of the head of the DNR. This status provides him with the obvious immunity. He openly enjoys driving a stolen car around the city accompanied by his security.

Speaking about Oleg Tsarev, great efforts are made to keep him as far from Donetsk, as possible. Although, the image of him as a true leader of the newly created state remains bright in the eyes and minds of many in the DNR. He is opposed by Alexander Coffman, who claims his rights to the Tsarev’s position.

To summarize, I must admit that the formation of the government in the DNR goes exactly according to the scheme that was opposed by the people of eastern Ukraine: people who do nothing but rob and steal are appointed to run the country. The main criterion of their selection is absolute loyalty to the leader, loyalty to Zakharchenko.”

2 Responses to “Leader of the DNR Zakharchenko Is against Novorossia”