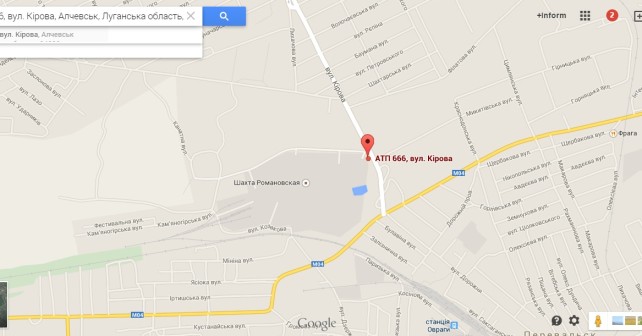 Our insiders report that there was an explosion of ammunition load at Auto Transport Enterprise [Russian: Avto-transport enterprise or ATP] No. 666 (Kirova Street, Alchevsk, Luhansk Oblast), where Mr. Mozgovoy’s base [Alexey Mozgovoy is leader of one of the separatist military factions of LPR, commander of Prizrak battalion] is situated. According to the source, the incident happened in the course of internal squabbles between LNR cossacs and Mozgovoy’s gang.

It emerged that Russian mercenaries in Perevalsk issued their ultimatum: if they don’t receive money by the New Year, they are going to return back home.

The insiders report that there is also a large number of armored vehicles located in Perevalsk; however, the militants lack qualified personnel: there are no crews to manage the vehicles.

No Responses to “Militants Ammunition Exploded in Alchevsk at ATP 666”