Militants relocated to another building in Antratsyt 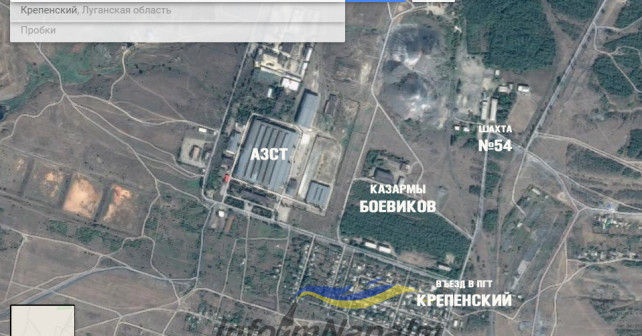 According to the informants, which are located in the occupied territory, the militants left the building of the Antratsyt Raion State Administration (Lugansk Oblast, Ukraine) for the first time since April, 2014.

The locals confirm: “There is nobody right now, the symbols of the Russian Cossack band formations are removed from the state administration and the square in front of it. The building is sealed.”

Our informants state: “You think this is it, do you? No, they just moved to another object and established a new base-camp at the entrance to the village of Kripenskyi, near AZST ‘Teplychnyi’ and the abandoned coal mine No.54 (named ’50 years of Soviet Ukraine’).”

Let us remind you that Nikolai Kozitsyn, the ataman of the pro-Russian Cossack formations, gave an interview to one of the Antratsyt TV channels in the end of June, 2015. He stated that LNR militants prepared the assassination attempt on him. During the next interview, given on July, 3, Nikolai Kozitsyn also said that the LNR ‘chiefs’ captured two hundred persons including the Russian citizens, members of the illegal armed formations.

The former leader of the militants promised to complain to the Russian government about the Lugansk ‘chiefs’ actions. “The captives are not charged with anything – just with the illegal possession of firearms. But what kind of law do they [chiefs] follow being self-claimed and unrecognized?” the ataman asked.

One Response to “Militants relocated to another building in Antratsyt”