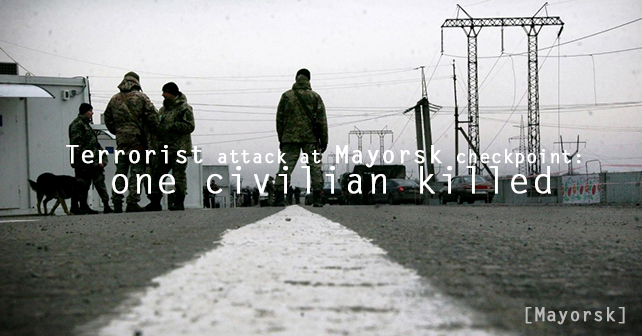 On the morning of December 14, Russian terrorists organized a bloody provocation at Maiorsk checkpoint. Two sniper shots resulted in two civilian casualties. One victim, an elderly man, died on the spot of a shot to the head, the second one was shot in the shoulder, and Ukrainian medics on duty at the checkpoint rendered him aid. The details, obtained by InformNapalm volunteers, allow us to conclude that this terrorist act was not spontaneous, but was conducted on the order of the militants’ command.

Immediately after the release of news about the incident, InformNapalm addressed questions to Oleg Slobodyan, press secretary of the State Border Service of Ukraine. We found out, that the two victims were older people, and the dead one was a civilian from Horlivka, born in 1957. There were only two shots and two victims, therefore, we can make a preliminary conclusion that it was a sniper attack.

“There were two shots, militants fired purposely at people and ceased fire immediately when they hit their targets. It is apparent, that shots were aimed at older persons. The investigation team is identifying the weapon type, preliminarily, a 7.62 mm caliber was used; the final conclusion is to be made by the investigation team,” Oleg Slobodyan said when answering InformNapalm volunteers’ questions. 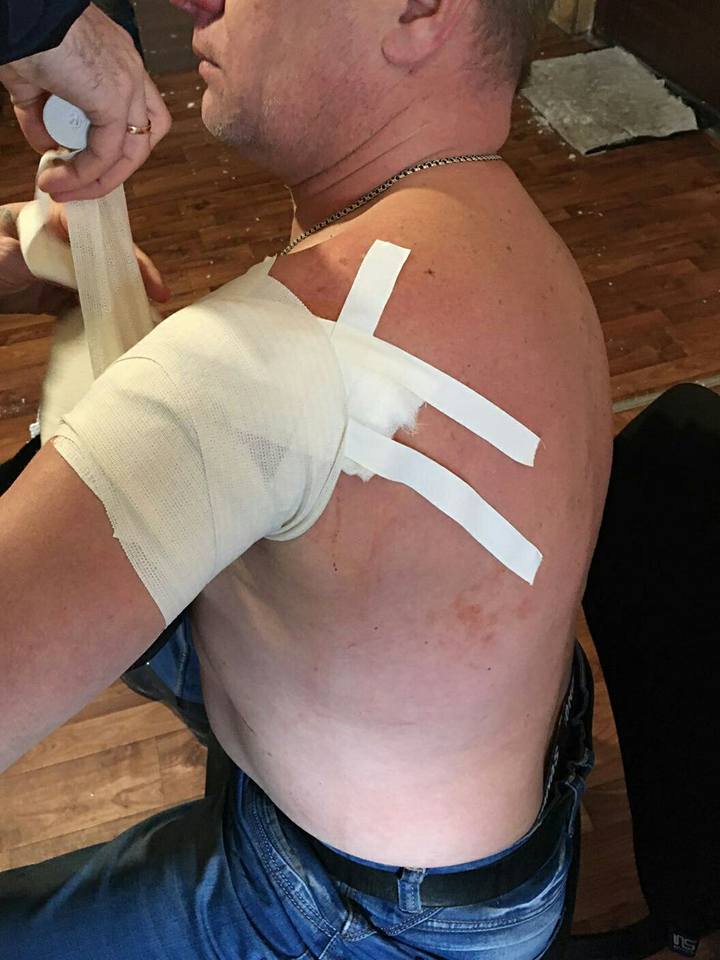 National Police has been treating the shooting at Maiorsk checkpoint as murder and provided some details obtained from eyewitnesses.

“The event has been qualified under Part 2 article 115 of the Criminal Code as a premeditated murder. Now, there is a police team at the crime scene, investigating the circumstances of the death of one person and injuring of another at Maiorsk checkpoint. Today, at approximately 8:50 am, police received information that there was a dead male body in the line at Maiorsk checkpoint. An investigation team arrived immediately at the scene… Witnesses in the line said that at approximately 8:50 am they heard shots and saw a man fall to the ground and had no vital signs, and another was injured. An ambulance was called for the wounded man, he was hospitalized; his life is not in danger. The investigation team is inspecting the scene,” Natalia Shiman, head of press service for the National Police in Donetsk Oblast, said.

In addition to precise shooting at civilians, coming from the occupied territory, there is another piece of evidence that this bloody provocation was planned ahead and targeted to disrupt operations at the checkpoint, that is the quick response by Russian propagandists who immediately released their statements.

For example, Eduard Basurin, so-called press-secretary of the Donetsk People’s Republic (DPR) terrorist military command, quickly released his version of the event: “On the Ukrainian side of Maiorsk checkpoint for no apparent reason Ukrainian forces opened fire at a civilian bus with passengers inside. As a result, one civilian was killed and two were wounded. Immediately after the attack on the bus, Ukrainian punishers began mortar fire in the vicinity of the checkpoint to blame the DPR army for the attack on the bus. Information about this crime committed by the Ukrainian Armed Forces has been reported to the Joint Center on Control and Coordination (JCCC) and the OSCE.”

Cynicism of Russian propaganda is already known around the world. It is worth mentioning that in October 2016 the European Parliament Committee on Foreign Affairs adopted a draft resolution, which compared publications of Russian news agencies with ISIS propaganda materials.

A similar incident happened recently. On December 13, a border guard was shot and wounded in the head by militants at Stanytsia Luhanska checkpoint in Luhansk Oblast. He got medical first aid and was taken to a hospital.

We call on our readers to actively share our publications on social networks. Submission of materials investigations into the public plane can turn the tide of battle information and confrontation.

No Responses to “Murder of Horlivka resident at Maiorsk checkpoint: planned provocation of terrorists”