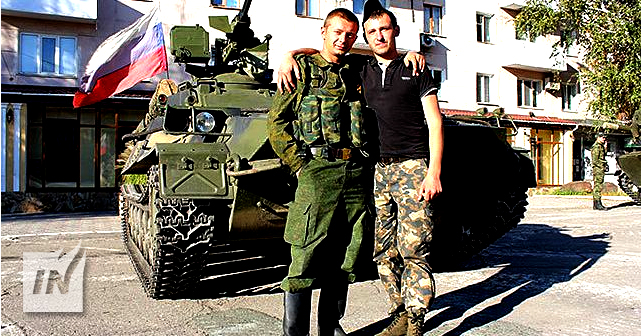 A new MT-LB light multi-purpose armored towing vehicle (MT-LB) of the 34th Motorized Rifle Brigade of the Russian army has been identified in Donbas.

The investigation started after watching the video titled Novorossia Front: Greetings to wife and son posted on September 2014 on 36on.ru, local information portal in Voronezh. The video was filmed on the square near the city council of Perevalsk, Luhansk Oblast, Ukraine.

As usual, without realizing what they film, Russian journalists showed a MT-LB equipped with a new NSVT or Kord heavy machine gun, (instead of the standard TKB-01-1 gun turret). This modification of MT-LB has been produced by the Russian OJSC Muromteplovoz since mid-90s and this model definitely has never been exported to Ukraine. But “Luhansk miners” got them somehow. The first modification of the MT-LB VM equipped with the NSVT heavy machine gun has been taken out of production. Two other modifications are still produced for the special mountain units of the Russian Army.

This was enough to report another fact of Russian military equipment spotted in Ukraine, but one peculiarity of the machine in the video made us hesitate. The triplex (periscope) was mounted in nonstandard position. Instead of the right side wall it is fixed on the roof of the machine. And the 3-colored camouflage pattern on the machine is non-standard either. 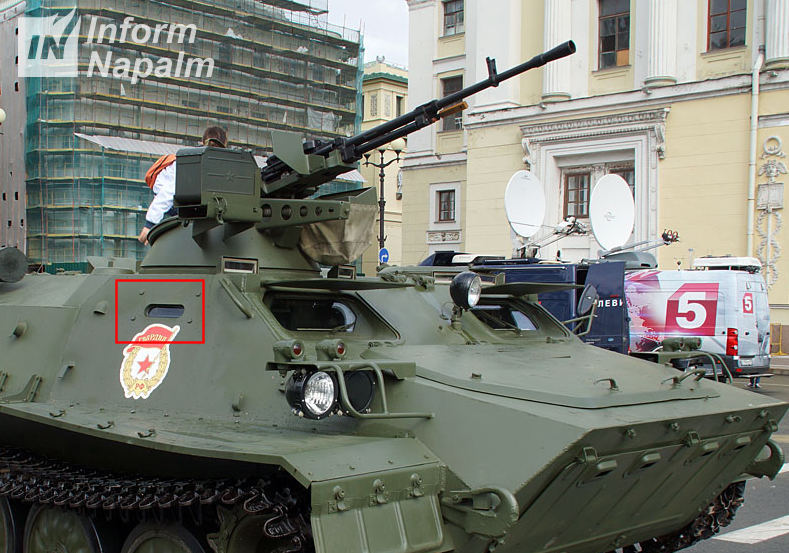 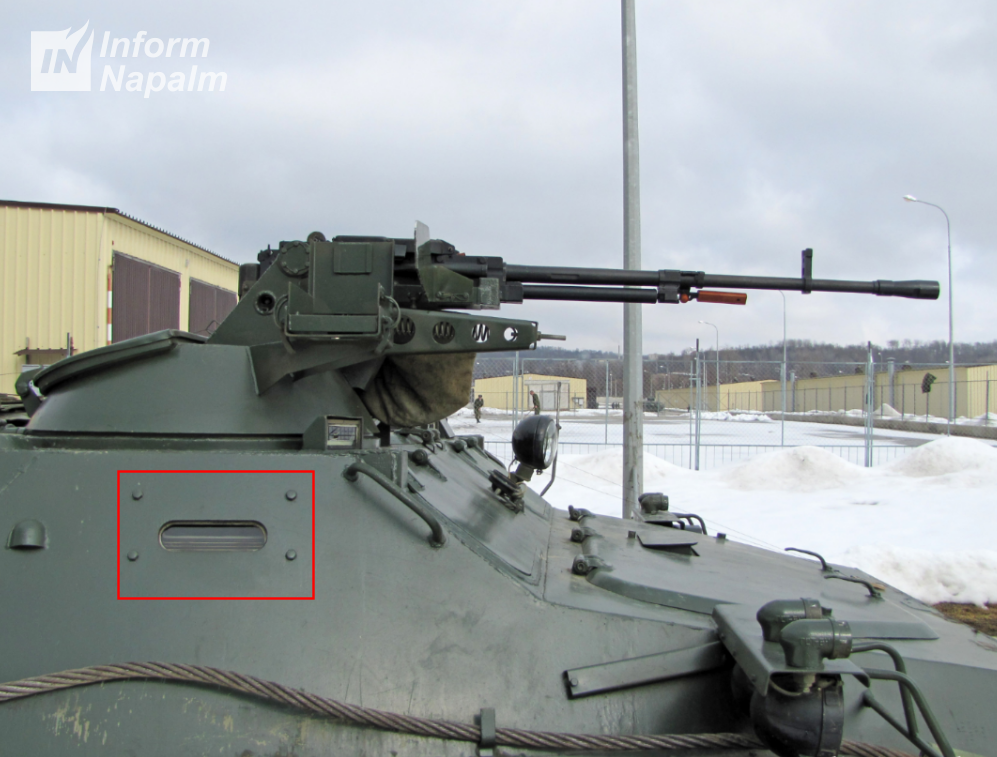 The MT-LB, filmed on the video from Luhansk Oblast 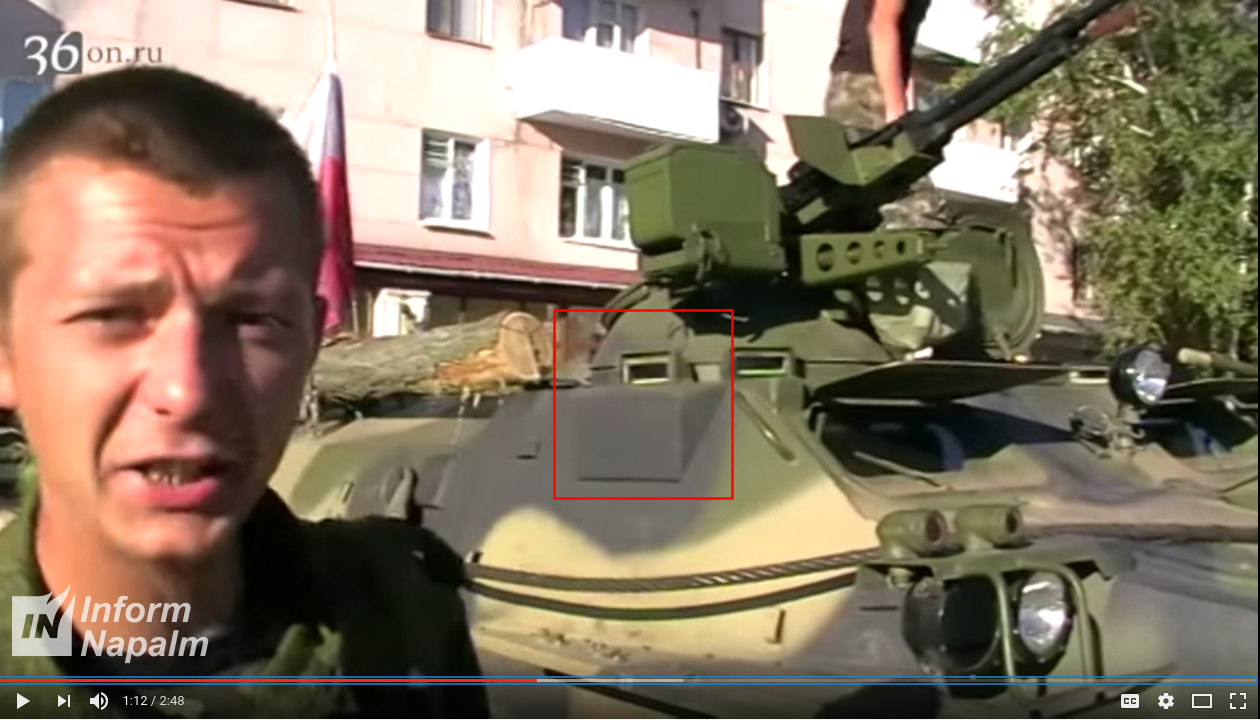 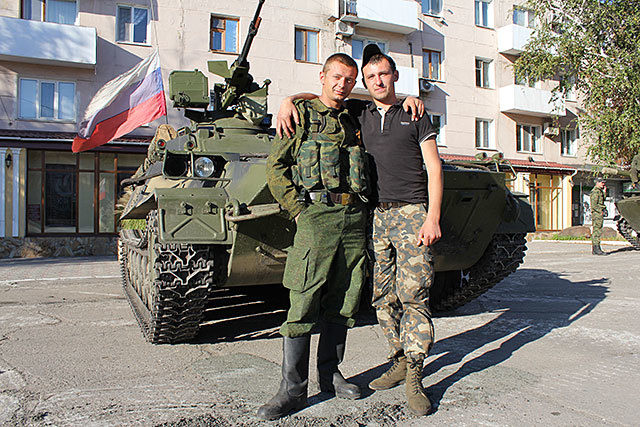 We had to search through the photo albums of the servicemen of mountain brigades (the 8th, the 33th and the 34th) and the 200th Arctic Motorized Rifle Brigade of the Russian Army that operate this type of machines and have taken part in the war in Donbas.

We managed to find out that the 34rd Separate Motorized Rifle Brigade of the Russian Army was operating this type of specially modified MT-LB as well as standard MT-LB VMK (military unit No. 01485, Southern Military District, Storozhevaya-2, Karachay-Cherkess Republic). Note the three-colored camouflage pattern on these machines. The machine on the video from Luhansk Oblast has the same painting pattern. 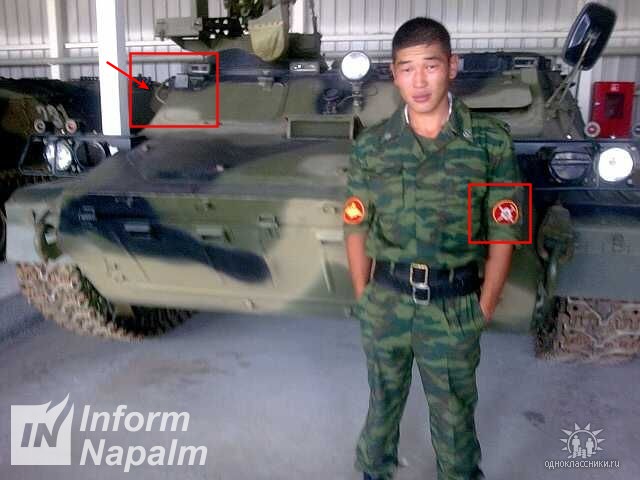 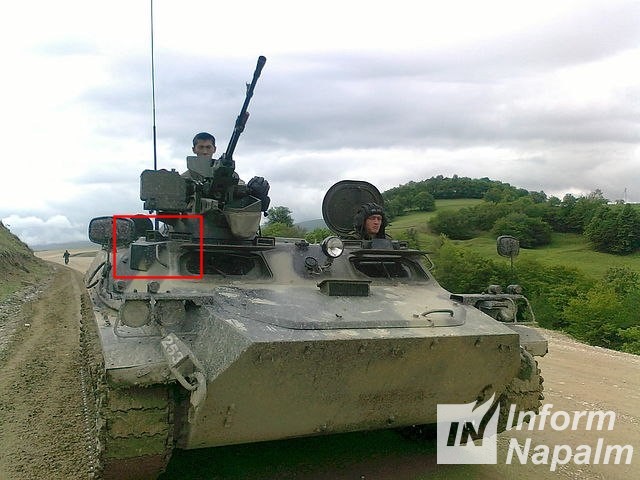 Although we identified the owners, we could not identify the modification of the MT-LB from video. We guessed that it could be the newest MT-LB VM1K, but found no pictures on the web to check our guess. We could do a more definite identification if we had information about type of the engine and radio-station. That is why we decided to define this machine as MT-LB VM/K. In addition to the above, we would like to note that MT-LB of the same specific type belonging to the 34th Separate Motorized Rifle Brigade was destroyed by the Ukrainian army near Marynivka border point in Donetsk Oblast in August 2014. 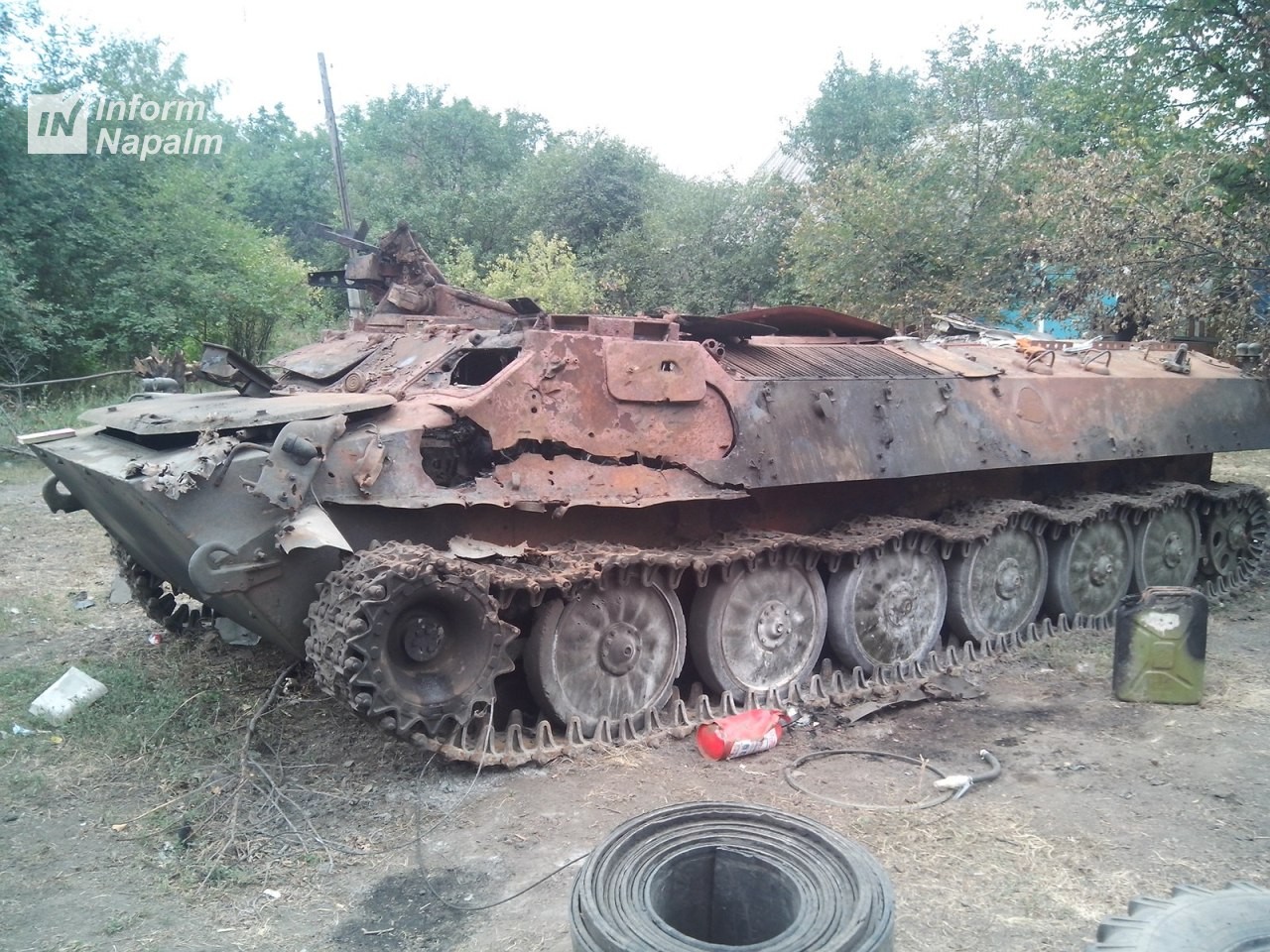 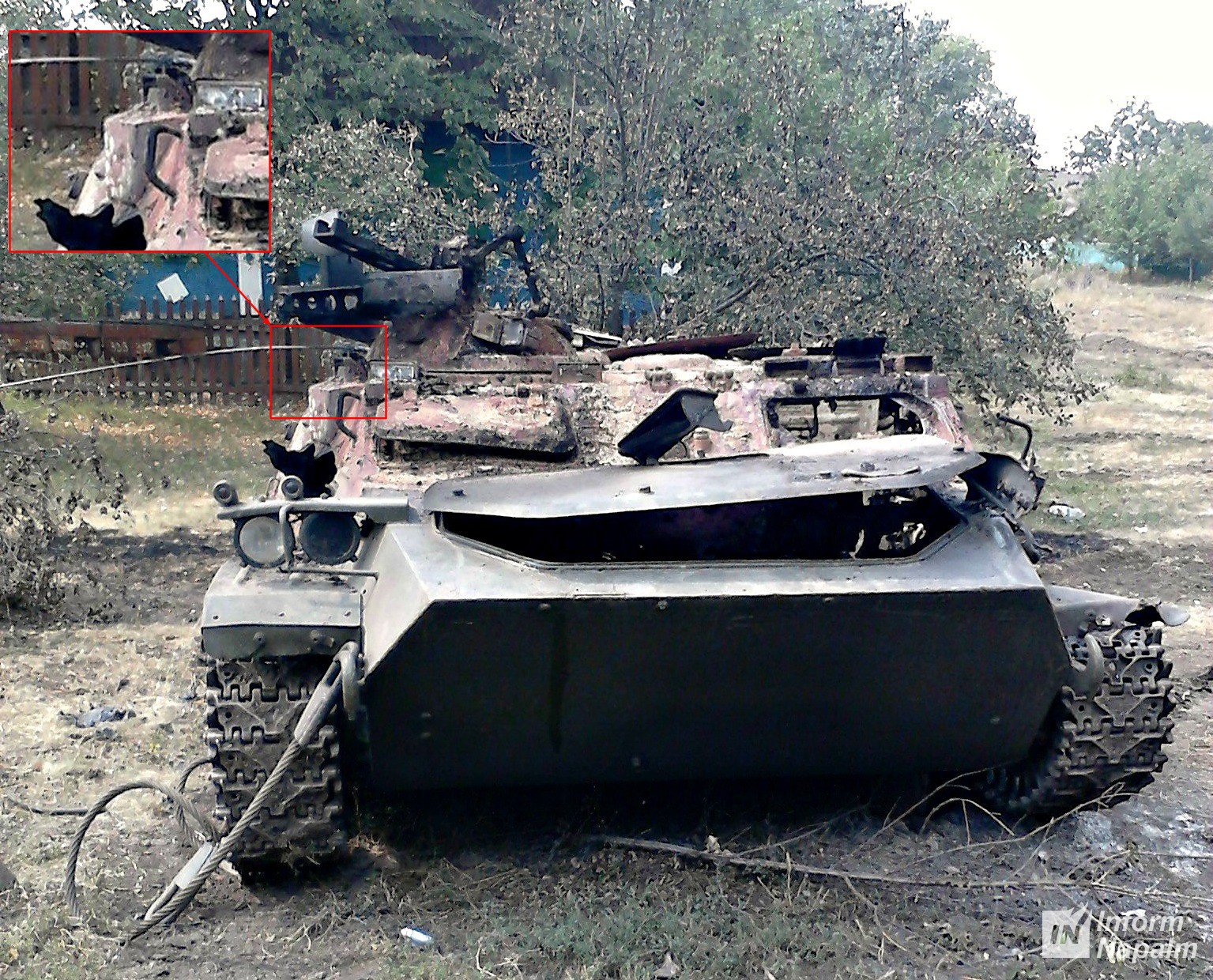 While writing our piece on this OSINT investigation we found a picture proving the presence of at least two MT-LB VM/K of the 34rd Separate Motorized Rifle Brigade in September 2014 in Perevalsk. 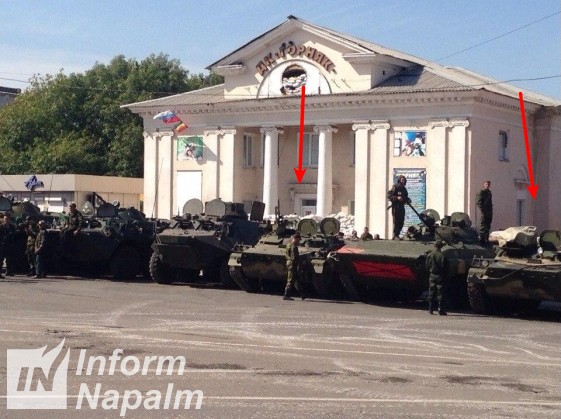 In our investigations, we have featured multiple new Russian MT-LBs without specifying the definite modification. Those were vehicles of the 8th Separate Motorized Rifle Brigade [1], [2] and the 200th Separate Motorized Rifle Brigade[1], [2]. Also we would like to remind that in September 2016 InformNapalm international volunteer community identified more than 30 types of weaponry and special equipment of the Russian Armed Forces in Donbas through open-source intelligence activities (analysis of satellite imagery, chance videos made by bystanders, personal photos from social network accounts of Russian mercenaries and military personnel, etc.). Based on investigation results  we compiled the database and video overview.