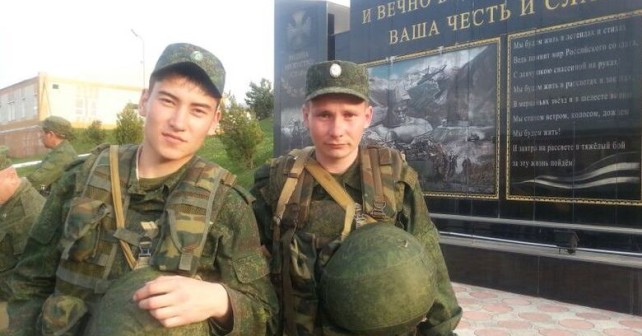 Another OSINT investigation resulted in the new article which showed how the Russian military equipment dissolves in the LPR’s “People’s Militia” and how the Russian servicemen get a veteran status after assignments to Ukraine.

The website of the Channel One [Russia] contains a TV report named “The training of the only mountain motorized rifle brigade is carried on in the Republic of Chechnya” from February 1, 2013. This report tells about the 8th brigade (military unit No. 16544, Southern Military District, Borzoy, Republic of Chechnya, Russia) training at the training site ‘Daryal’ in North Ossetia. Starting from 01:58 we can see the MT-LB armored tracked vehicles with the 8th brigade’s tactical signs – white circle in a square (archived). 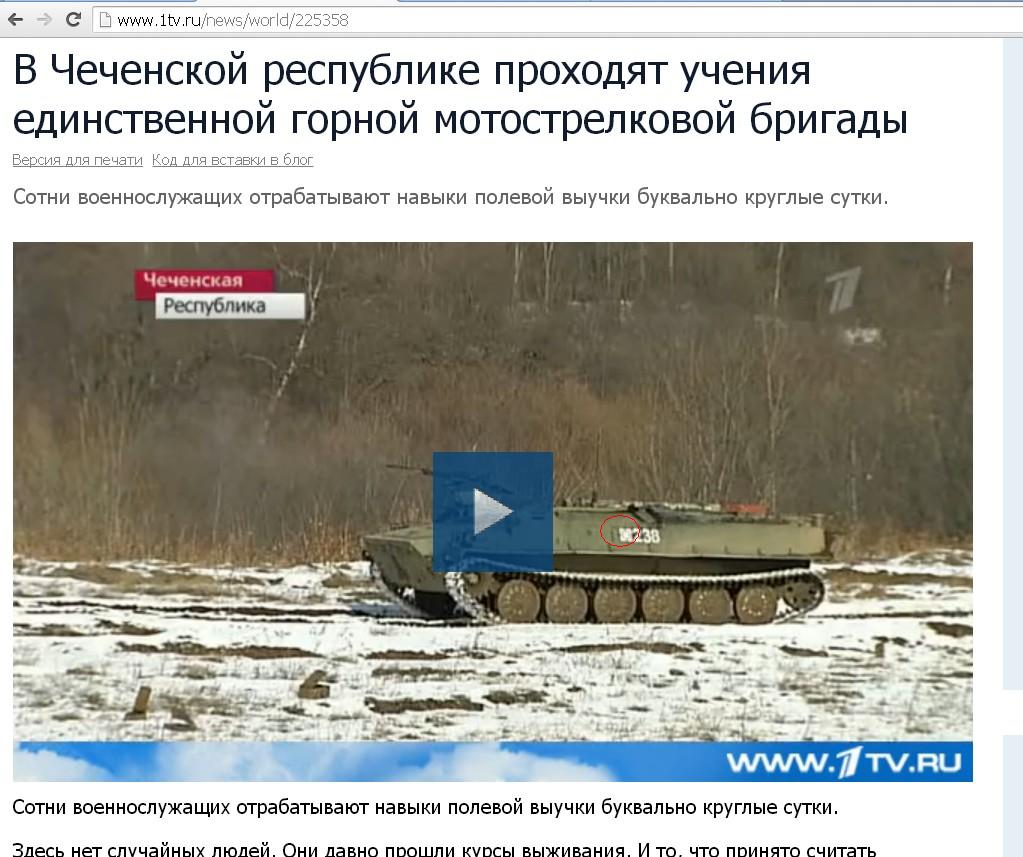 There is also a Youtube video named “The exercises with the personnel of the 2nd motorized rifle brigade of the People’s Militia of LPR have been conducted in Novopavlovsk” from March 15, 2015. It was prepared by the so-called information-analytic agency ‘Yugo-Vostok’ [South-East]. At 07:02 and 07:36 you can notice a modernized MT-LB with the 6P11 ‘Utes’ machine gun installed which has the mentioned signs of the 8th brigade (archived). 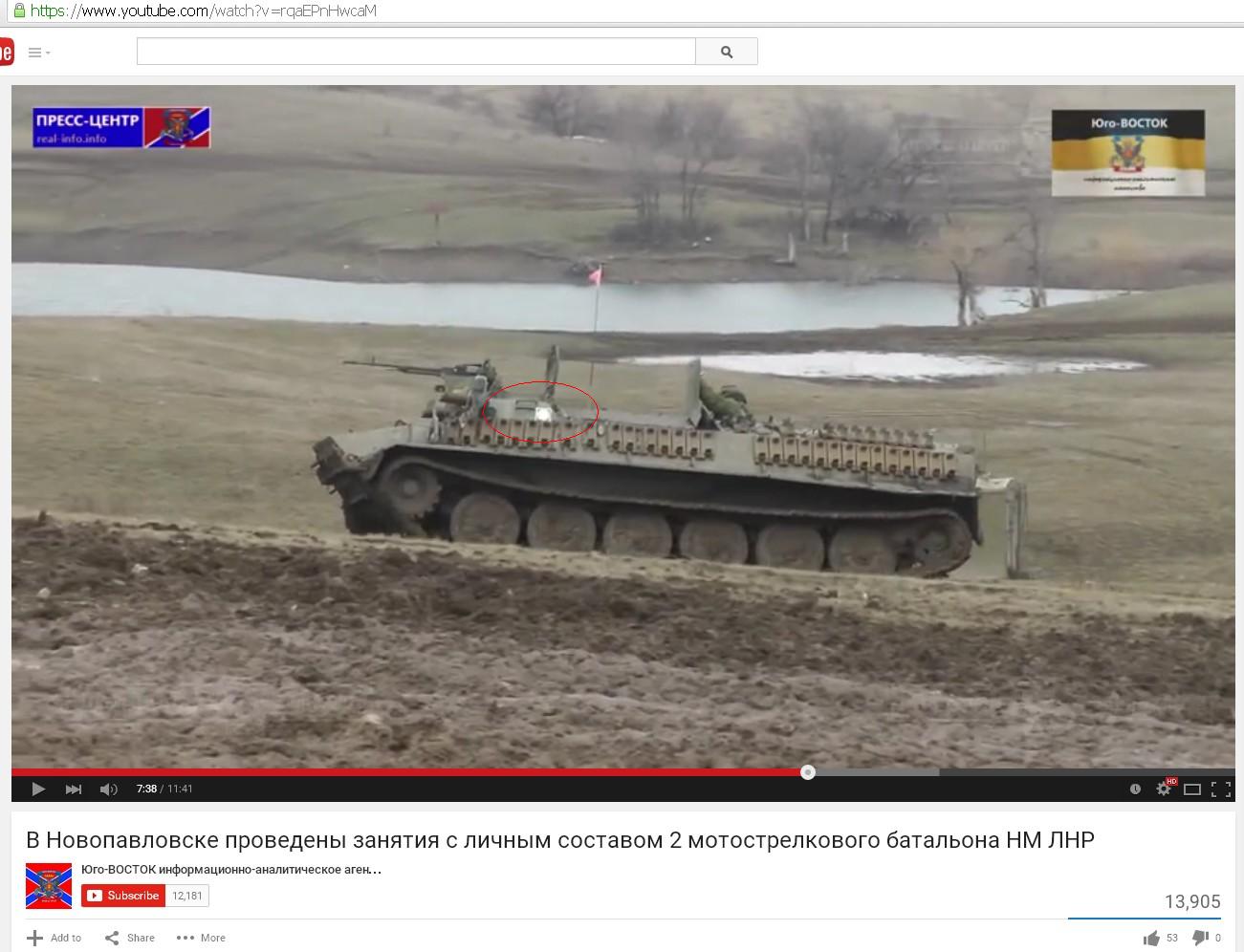 Other Russian military equipment (with the painted out hull numbers) can also be seen in this video.

To confirm the 8th brigade’s sign once more time, we have checked several VK online profiles of the soldiers who served in this brigade in Chechnya. Photos of the equipment with the same sign can be found in these profiles. The online profile (archived) of Sergei Chainikov, a serviceman of the 8th mountain brigade, does not have undeniable photos from Donbas, but it has a bunch of pictures (uploaded on November 4, 2014) which has strong indications that those pics are not made in Chechnya, but are related to the Rostov-Ukraine assignment: the covered faces, groups of the equipment and weapons, non-Caucasian landscape, informal clothes, etc). 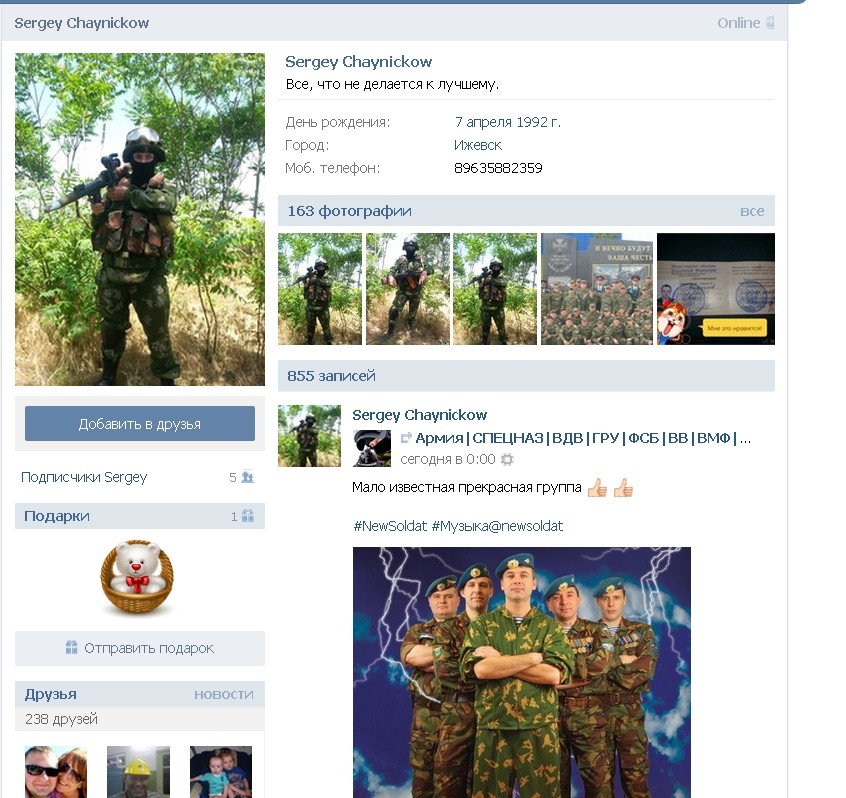 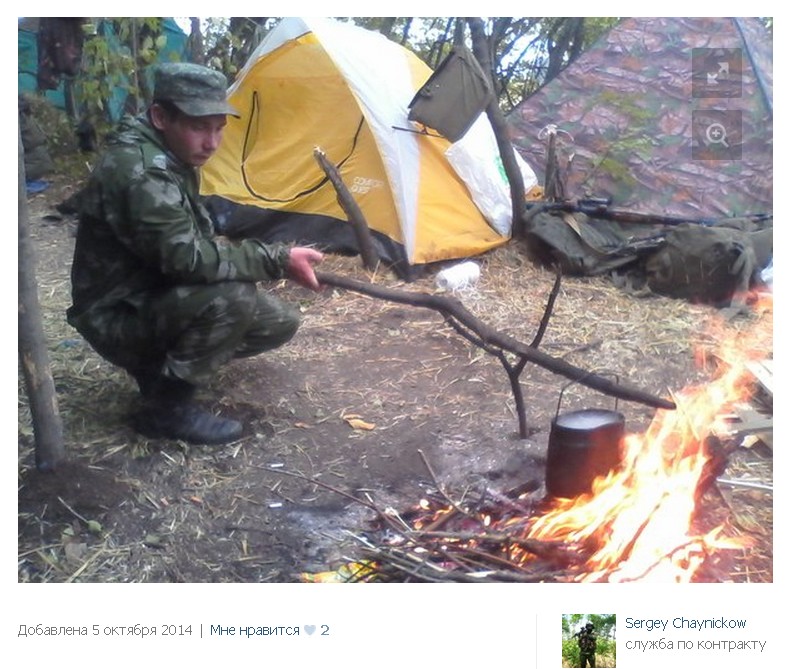 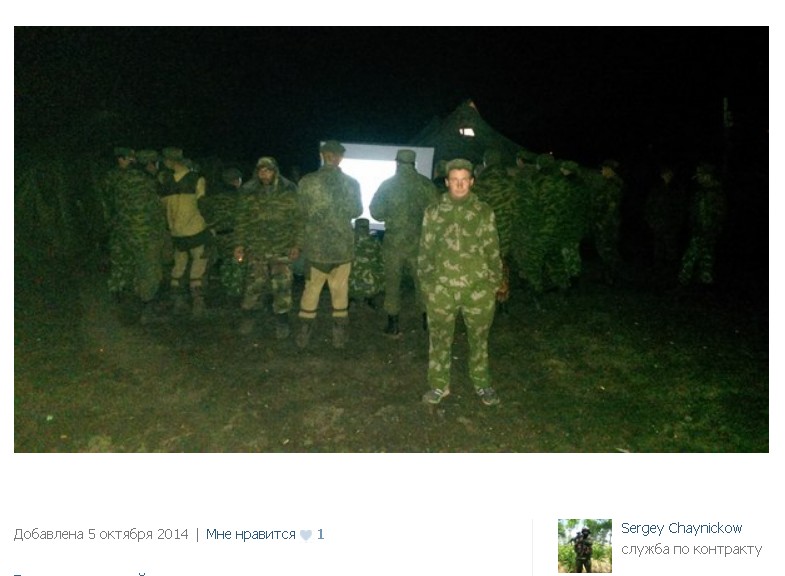 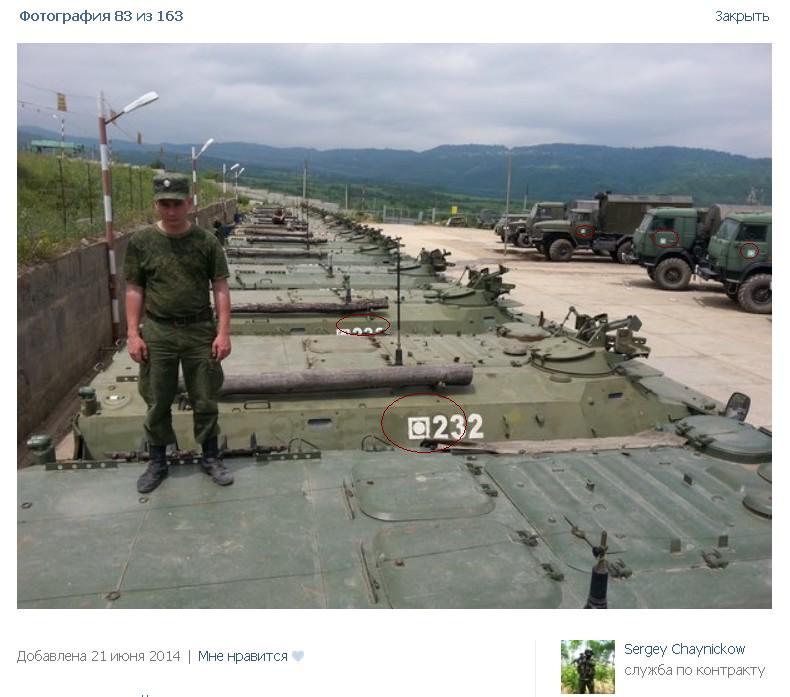 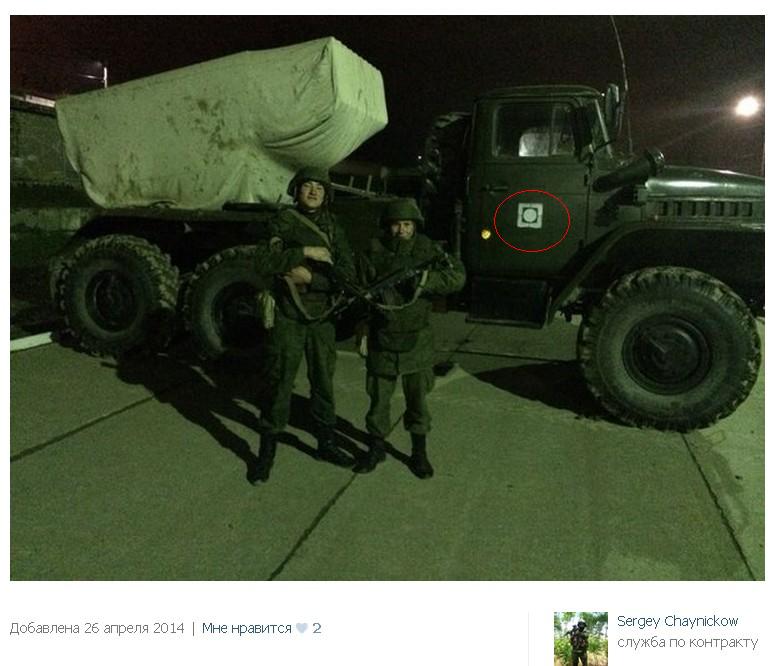 Other interesting pictures, including the copies of documents with comments, have been found as well. The most attention was drawn by the photo (uploaded on May 6, 2015) of the ‘veteran certificate’ with No. 0389711, issued by the Ministry of Defense of Russia on November 24, 2014, and signed by the Chief Human Resources Officer of the Southern Military District major-general S. Panevchik. Chainikov also left a comment that he had recently returned from ‘BZ’ [‘Boyevoye Zadaniye’, combat mission] and could not have boasted with the veteran status before that.

Another interesting document – Chainikov’s request (uploaded on November 8, 2014) for a vacation in 2014. According to this report, S. Chainikov is a contract soldier since October 25, 2013 and occupies a grenade launcher operator position in the 3rd sub-unit of the 1st platoon of the 3rd company of the 2nd battalion of the military unit No. 16544. His direct commanders are – sub-unit commander senior sergeant V. Agamirzoev, platoon commander senior lieutenant A. Galaev, company commander captain O. Chigasov, battalion commander lieutenant colonel N. Amirhanyan. 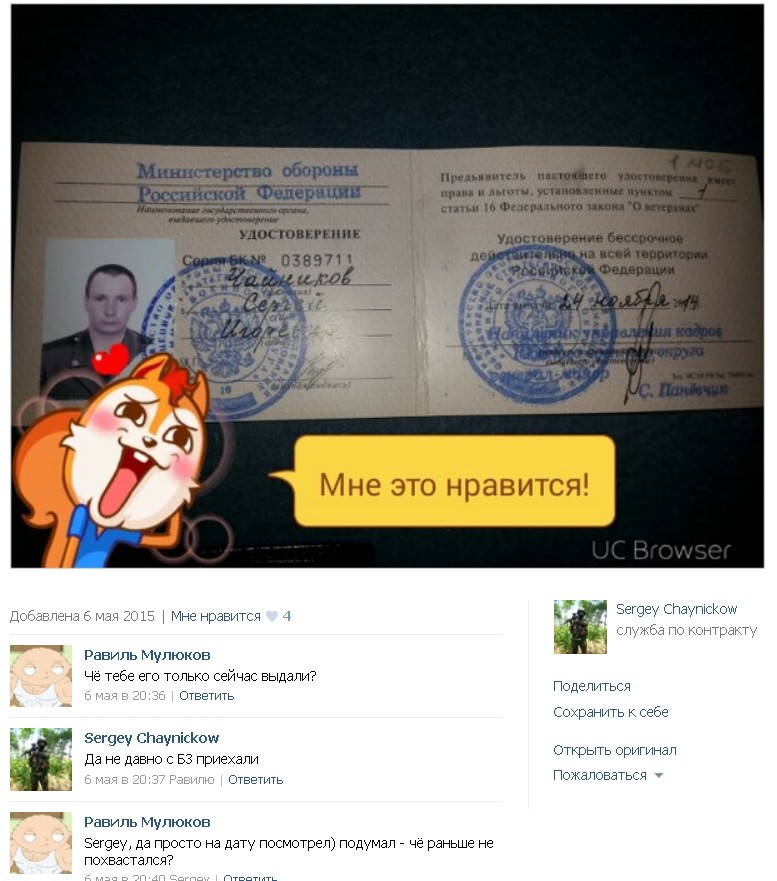 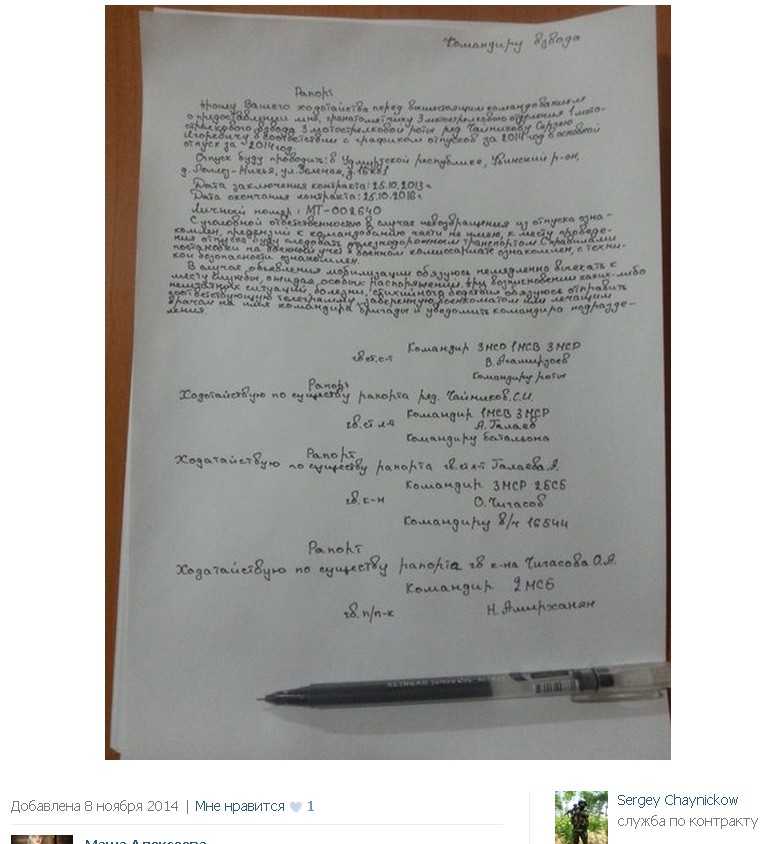 Taking into account the information above and the previously gathered data about the 8th brigade’s participation in the fights in Donbas, we can assume that the Russian equipment serves in the 2nd battalion of the LPR’s People’s Militia. And the mentioned contract soldier is a ‘veteran’ of the Russian aggression in Ukraine.

The topic about the Russian armored vehicles noticed in Ukraine is well covered by the ‘sled-vzayt’ investigator. One of his latest stories (in Russian) is dedicated to a MT-LB vehicle with the 6P11 ‘Utes’ machine gun – MT-LB VM or ‘Kord’ MT-LB VMK.

A great number of our stories is based on the data found by our friends and readers in the open sources. This article is based on the information gathered by Mikhail Net who tracked down the equipment of the 8th brigade in Donbas.