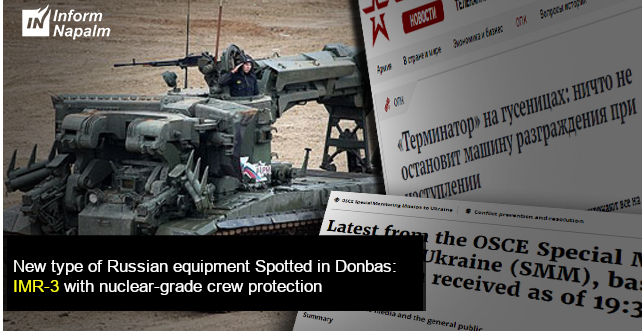 InformNapalm volunteer intelligence community discovered in the OSCE Special Monitoring Mission (SMM) reports a new type of Russian military equipment spotted in the Donbas. This engineer machine was designed for offensive operations and can provide crew survivability even in the event of a nuclear attack.

The regular OSCE SMM report issued on August 7, 2019 contained the data received as of August 6, 2019. The report said that a long-range UAV of the SMM found one combat engineer vehicle (IMR-3) and fourteen infantry mobility vehicles (BMP-1) near Kruglyk village (65 km south-west of Luhansk).

In 2017, an article appeared on the website of the Russian media company Zvezda saying that IMR-3 is a Russian “terminator” that supposedly is an unrivaled aid to offensive operations and the vehicle’s crew is protected even for the event of a major industrial disaster.

Combat operations sometimes necessitate the movement of troops along the so-called convoy paths. A convoy path is a chosen cross-country route (off-road) prepared especially for the movement of a military convoy. The preparation of a convoy path includes the following basic elements: tracing the route, reducing of descent and ascent gradients, demining of the path, clearing of debris, snow, etc.

Combat engineer vehicles belong to the group of machines intended for laying passages, clearing debris and perform controlled demolition as part of engineering support for combat troops. To perform these tasks, the machines are equipped with a bulldozer, crane and additional attachments (bucket, scraper, drill).

What is known about IMR-3 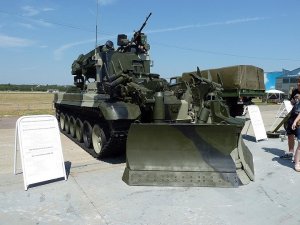 IMR-3 entered service with the Russian Army in 1999. Serial production was established at Uralvagonzavod (Nizhny Tagil, Russian Federation). IMR-3 is based on the chassis of the T-90 tank, designed to ensure the advancement of troops and perform engineering tasks in the areas with a high level of radioactive contamination.

The machine has a track-width mine plow with an electromagnetic attachment allowing the IMR-3 to independently penetrate minefields with anti-track or anti-bottom mines equipped with contact or non-contact magnetically activated detonators.

Armament of the IMR-3

The vehicle is equipped with a 12.7 mm remote-controlled anti-aircraft machine-gun mount on the turret which is capable of providing aerial defense as well as engage lightly armored ground targets and manpower. There is also a thermal smoke equipment for setting a smoke screen.
The crew, components and assemblies inside the vehicle are protected by a system attenuating the ionizing radiation of a nuclear explosion by 6 times and gamma rays of a radioactively contaminated area by 120 times.

The crew’s life support system includes devices for boiling water and heating food, as well as collecting and storing of excretion waste allowing the crew to perform combat tasks for three days without leaving the vehicle. The machine also has a self-entrenching capability. Required self-entrenching time is 12-30 minutes.

The IMR-3 combat engineering vehicle is a relatively new type of equipment that has been in service with the Russian Armed Forces since 1999. It has never been in operation with the Armed Forces of Ukraine. Therefore this is yet another proof of the supply of armaments and military equipment by the Russian Federation to the war zone in Donbas. In total, more than 50 types of the uniquely Russian weapons and equipment have been recorded in Donbas, none of which could have been captured in combat from the Ukrainian Armed Forces. These facts make up direct evidence of the participation of the Russian Federation in the war against Ukraine.

No Responses to “New type of Russian equipment Spotted in Donbas: IMR-3 with nuclear-grade crew protection”