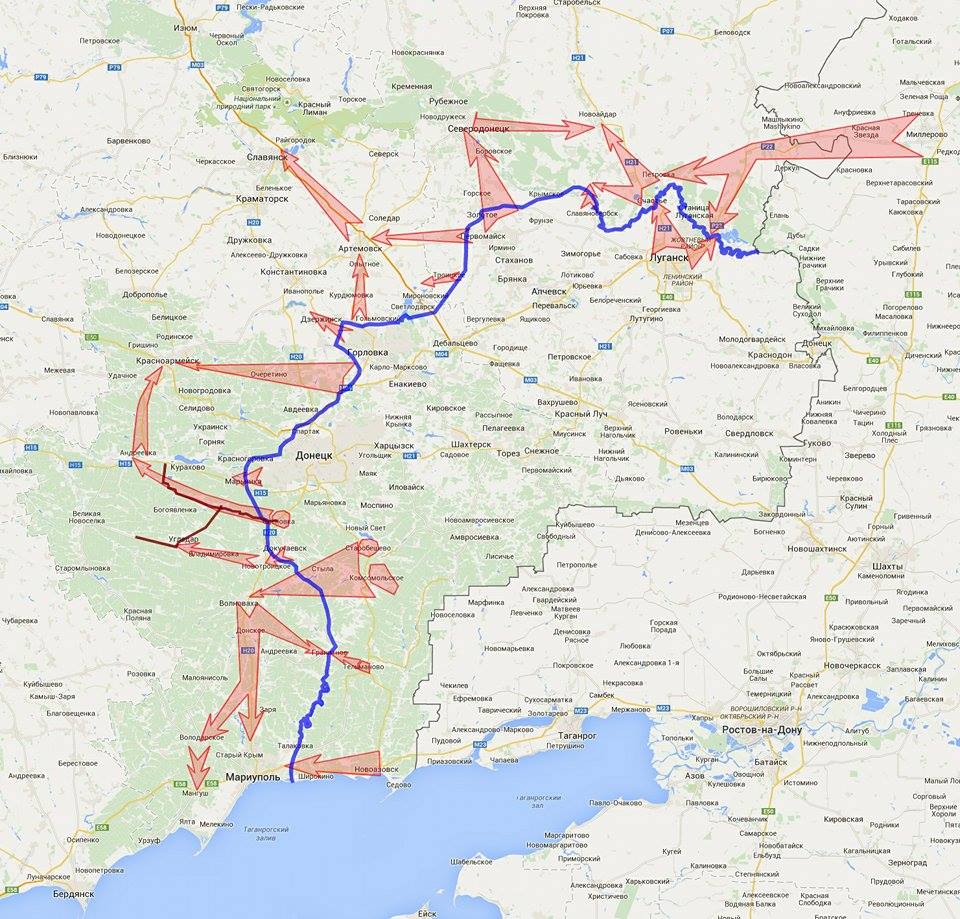 For the past few weeks we have been receiving reports from our insiders regarding massing of military equipment in Olenivka and Dokuchaievsk (Donetsk Oblast). At first glance it looks like a preparation for an offensive on Mariupol. However, since militants told they were going to reach the administrative borders of oblasts, further attack westwards is inevitable. Besides, they will need to cover the flanks of an attack in South-Western direction. It is most likely that they will accumulate military equipment to attack Olenivka — Andriivka via Paraskoviivka and Uspenivka. Taking into account information from eyewitnesses, we could say that they have up to one mechanized battalion there.

The advantage of such an attack is that they move along the water and come to the rear of the Ukrainian units based in Kurakhove and its vicinity. This attack required the militants to stretch out their communications (thus making logistics harder) and thus they will have to take care of their rears. If you look at the map, there is only one good road allowing to transfer military equipment fast: Vuhledar — Paraskoviivka. In order to gain control over this road, the militants will try to reach Vuhledar.

As for Volnovakha, the enemy has concentrated significant force in Starobesheve and Komsomolske (the exact amount of vehicles is not known, but according to reports of our insiders, the enemy has at least two brigades there). In addition, they have sizeable forces in Telmanove as well. Apparently, there will be no attack towards Telmanove — Hranitne — Volnovakha because of the natural water obstacle, i.e. the Kalmius River.

Besides, the moderate tempo of hostilities in that area gave the Ukrainian 72nd Brigade an opportunity to fortify. Now it will be quite difficult for the enemy to overrun our 72nd. Instead, everything that is located in Komsomolske and Starobesheve will be tossed towards Volnovakha. If the militants capture Volnovakha, only then will they be able to develop an offensive upon Mariupol and Hranitne, getting into the rear of the 72nd Brigade. In order to divert attention, the militants will likely attack towards Telmanove — Hranitne.

There is a direct route from Volnovakha to Mariupol. However, we should note that the distance is quite long, and the highway goes through the open plains in this area. This is why the enemy draws up air defence systems southwards. This air defence will cover the attacking Terrorussian group from Ukrainian SS-21 Scarab Tactical Operational Missile Complexes, as well as 9A52 Smerch and BM-27 Uragan MLRS. If the militants successfully reach Mariupol, they will not enter the city, but instead will try reaching Mangush in order to cut off supplies.

There is another argument supporting the theory of encircling attack, and it is military equipment leaving Petrovskiy district of Donetsk. We tried to find it everywhere. We were unable to check only the living block of the mine No. 29 and the area of the asphalt plant. It is possible that a small group of terrorists is located there. The task of this group will be to contain the attack of the ATO forces from Mariinka and to imitate the attack towards Mariinka — Kurakhove in order to divert attention from the main direction (Olenivka — Andriivka).

As for the Northern direction, militants are increasing their manpower in Horlivka. It could seem as if they are preparing for an attack upon Kostiantynivka. However, there is a natural obstacle complicating this, i.e. the Kleban-Byk natural landmark, beginning between Dobropillya and Kostiantynivka and ending near Artemivsk. There is still an option for the terrorists to attack towards Krasnoarmiisk and Dymytrov from Horlivka: there are steppes and very few water obstacles there.

Besides, this direction is at the turn of the two sectors. It might seem unwise to attack in that direction, until you take in mind the possibility of Olenivka — Andriivka attack. If the latter attack succeeds, the ‘Army of Novorossiya’ will close the pocket with almost entire Ukrainian Sector B inside. In order to deprive this Sector of the possibility to transfer its reserves for flank attacks and to cut off communications, the militants will probably initiate fights in the Donetsk Airport and Pisky, simulating an attack on Avdiivka.

As for Sector S, it will be unable to help because of the troubles it will have in the area of Artemivsk. Judging by the amount of military equipment and manpower which militants are transferring to Stakhanov, we conclude that they prepare for an attack northwards. If Putin approves the attack, they will deliver blows towards Horlivka — Maiorsk — Artemivsk and Pervomaisk — Artemivsk. Keep in mind that part of the forces of Sector S will be busy with fights in the Kalynove — Svitlodar direction.

Sector A is also in danger of an attack at the turn of the sectors. It is most likely that the militants are preparing for an attack on Lysyhansk. They will probably try to pin down Ukrainian forces in the area of Trokhizbenka, imitating crossing over the Siverskyi Donets River (using the forces accumulated in Stakhanov and Alchevsk). In addition, the ‘Army of Novorossiya’ will fight for Stanytsia Luhanska (the assault troops will come from Millerovo, Russian Federation but they will pretend infiltrating along the border). You can read about one of the crossings over Donets here, it is unknown how many such crossings exist. If the militants succeed with Lysychansk and Stanytsia Luhanska, they will move towards Shchastya from the North and South-East.

These were short term prospects. Speaking of long term ones, we should mention the possibility of an attack on Slovyansk from Artemivsk. Besides, there is a risk that the militants will use a secondary road to move from Dobropillya to Kramatorsk. The road is in good condition and has neither checkpoints of the Ukrainian Army nor the National Guard of Ukraine.

As for the long term prosects for Luhansk Oblast, the militants will not move northwards because they remember that the residents of Svatove and Starobelsk were not impressed by them back in 2014. Novorossiya failed in the North of Luhansk Oblast last year and is doomed to fail this year, should they dare to try.

Last but not least: spring has come, trees are becoming green. Forests will become green soon, and then militants could decide to attack towards Yampol and Krasnyi Lyman: the terrain is very suitable for that: the Severskyi Donets River with its banks studded with trees and large forestlands…