Putin awarded Russian tankmen for their mission in Ukrainian Debaltseve 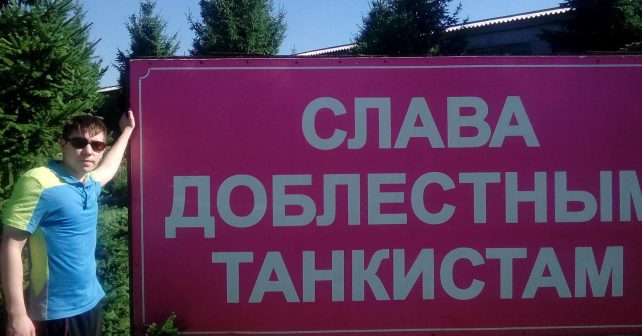 Dorji Batomunkuev, a Buryat who burned in his tank near Debaltseve in Ukraine, is probably one of the most famous modern Russian tankmen. He was shot to fame by a brief video with Iosif Kobzon (Ed.: Russian singer and a MP) which inspired an internet meme with the phrase “Are you Buryat? How glad I am!”

Dorjee turned out to be a very talkative tankman and gave an interview to Elena Kostyuchenko, a journalist of the Russian Novaya Gazeta newspaper. We learned from this interview, that the commander of his tank on the Donbas mission was Spartak Tipanov. Later he was treated in Russian military hospitals along with many other Donetsk People’s Republic (DPR) terrorists. Both regular Russian military personnel and rank-and-file mercenaries received treatment in military hospitals of St. Petersburg and rehabilitation in 442nd Military Clinical Hospital of the Leningrad Military District.

This interview gave us the name of another Russian tank crewman who was wounded at Debaltseve:

– No. There was Minakov who lost his leg in the tank. At the boot level. And on the right foot his toe was torn out too. Battalion commander got burnt, also the gun-layer Chipa, Spartak… That’s what comes to my mind.”

Profile of the trooper Alexander Minakov from Chita has nothing special. Apart from a couple of military photos, there were no other direct traces of any military career and none of his trip to Donbas (VK profile, archive). However, his friend list includes a number of profiles of Donbas militants and Russian contract soldiers Batomunkuev and Tipanov spotted earlier.

Minakov did not post any photos from the hospital on his page. But in the summer of 2015, a few months after Debaltseve, a photo with Minakov in a wheelchair was posted by Sergei Rozhkov, a Russian mercenary from Yakutsk (photo, archive). 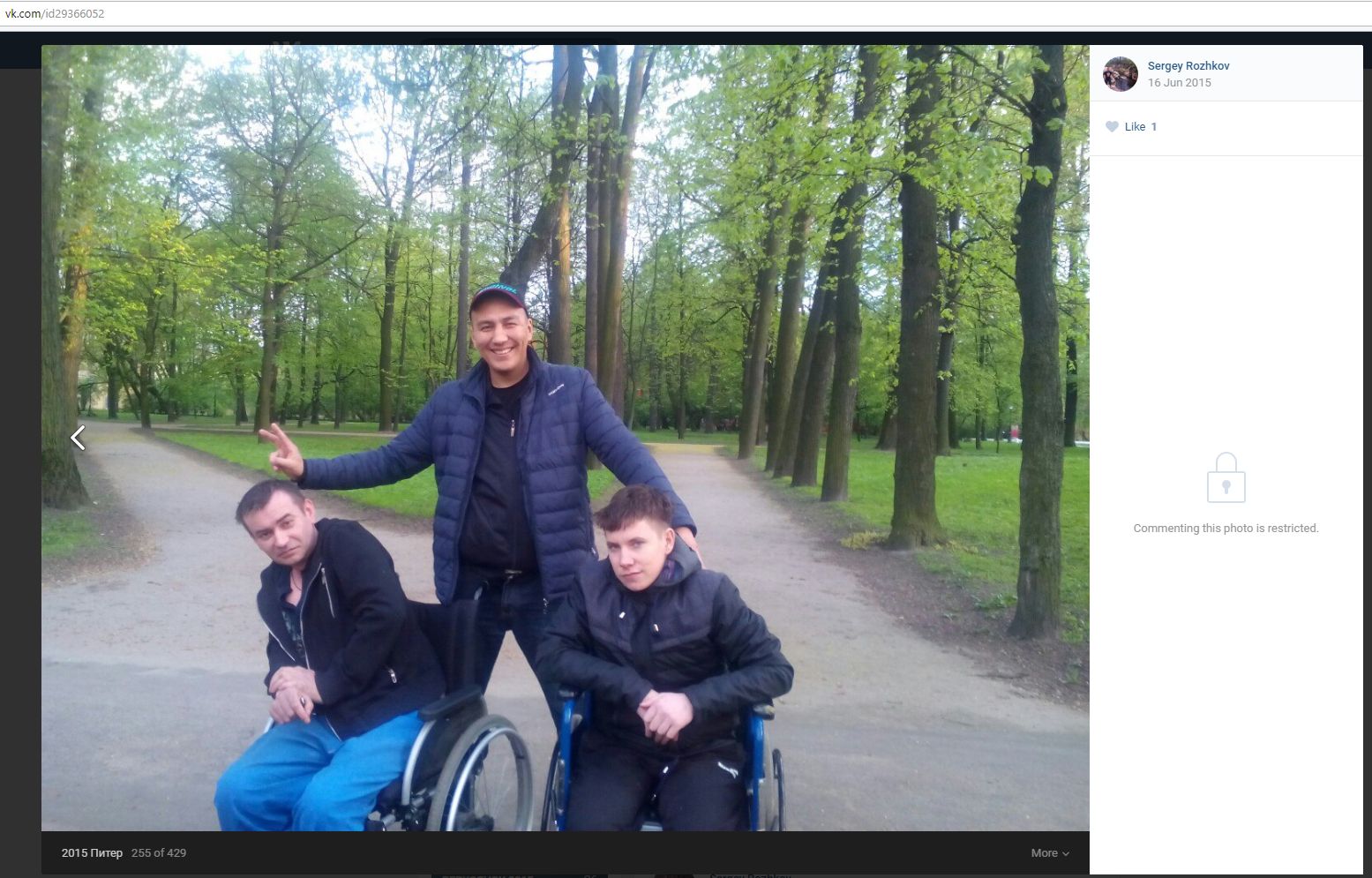 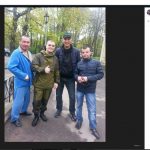 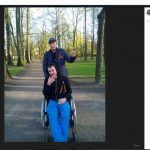 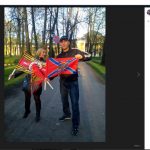 We did not find more evidence of Minakov’s mission to Donbas. However a year later, Minakov gave himself away. In his VK profile he showed his medal For Merit to the Fatherland, II class. 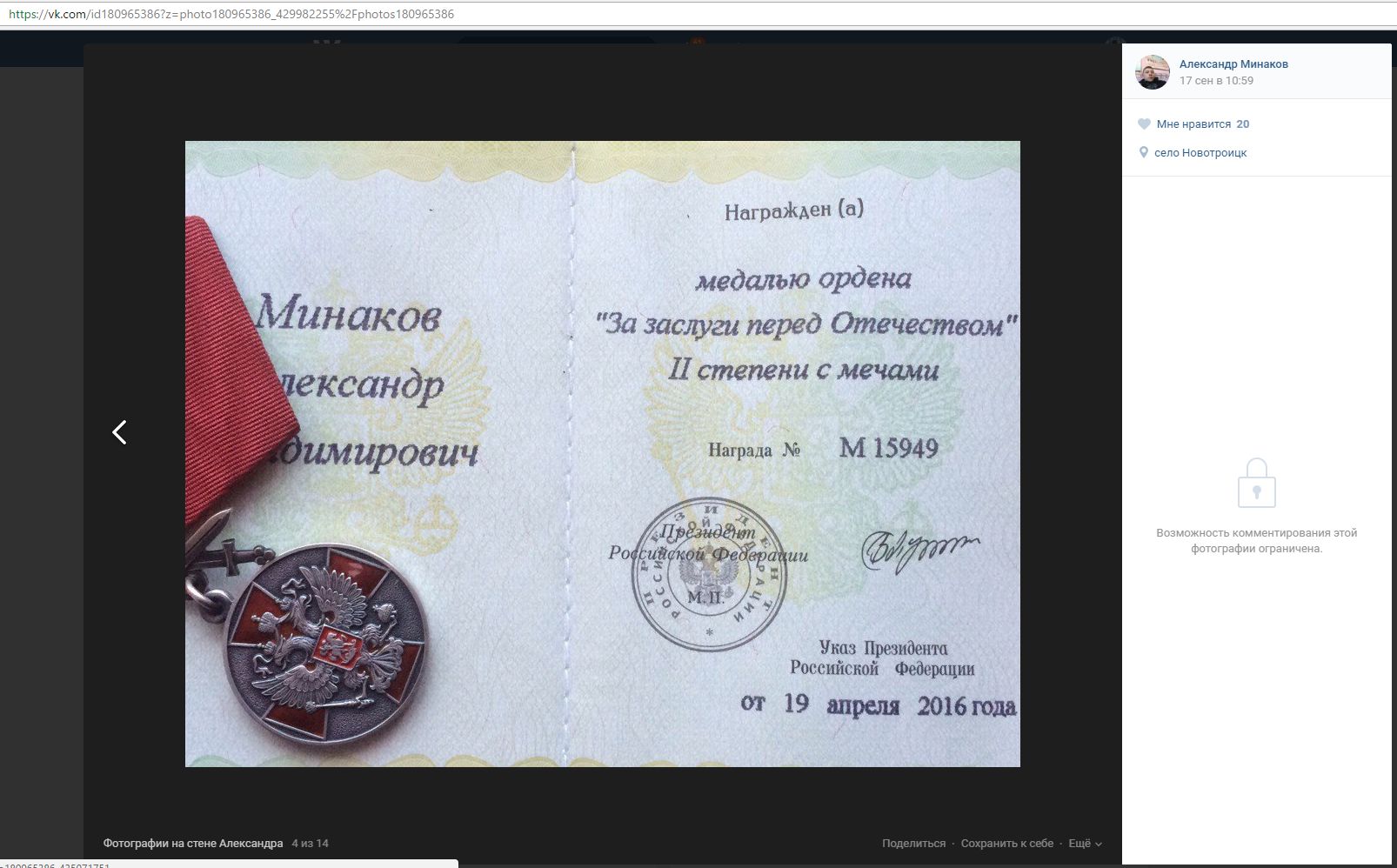 The photo has been removed soon and the VK profile was cleaned up. And, apparently, nothing gave away that Minakov was a hero trooper, except his other social network profile on OK with the photographs from the time of tanks and a photo of that medal. 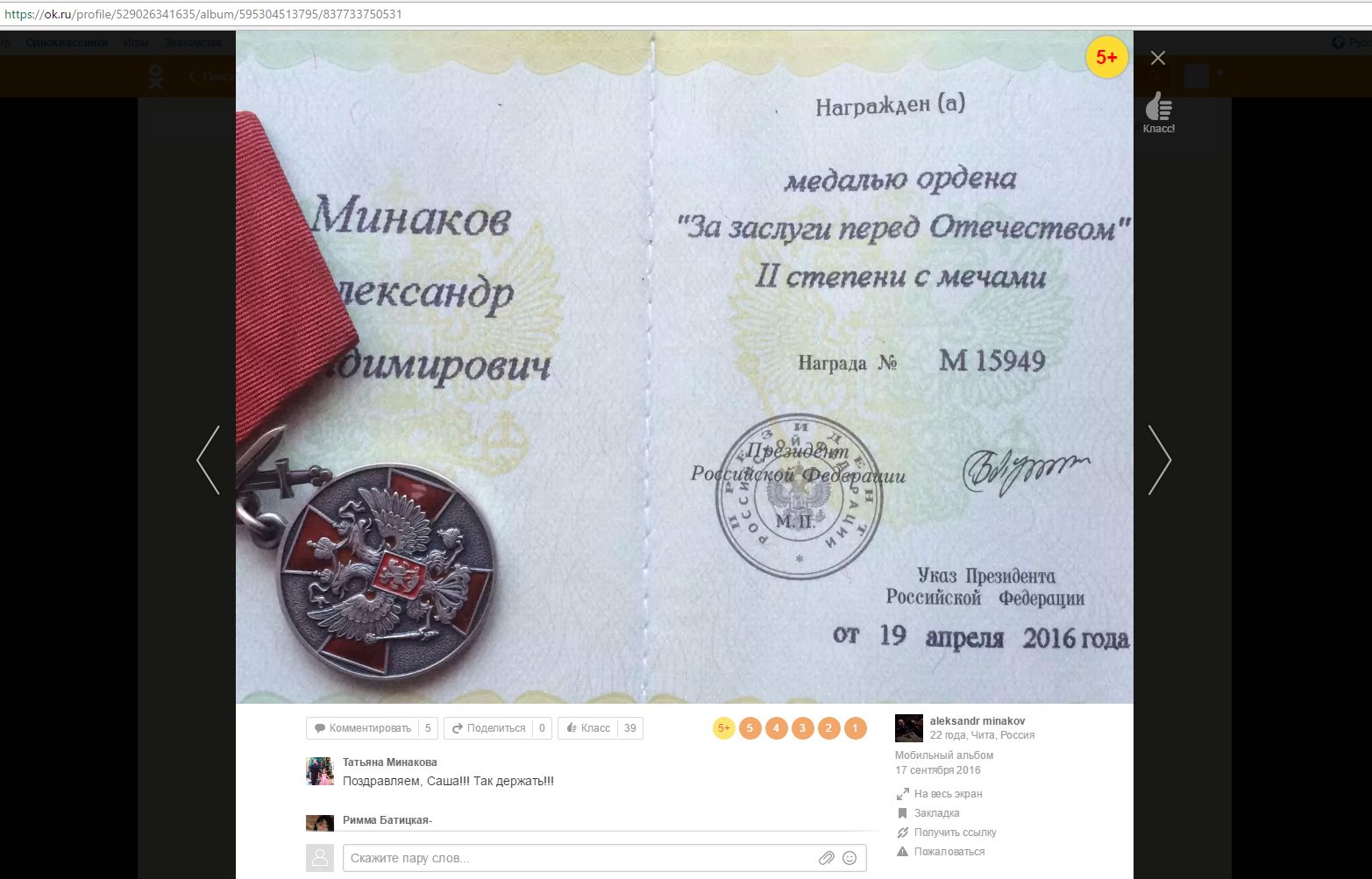 It is noteworthy, that different versions of the medal For Merit to the Fatherland is issued both to civilians and military men. Minakov received a medal with swords which makes it clearly a military decoration.

“… the military men for distinction in combat are awarded with a medal For Merit to the Fatherland with swords.”

The awarding decree is dated April 19, 2016 and signed by Putin. Such medals are often presented ceremoniously and with media coverage, however we failed to find a video of Minakov’s awarding ceremony. The decree is apparently classified.

Medal For Merit is not an ordinary reward. Russian commanders often hand out to their soldiers worthless departmental badges for missions to Ukraine. State medals are awarded to those who have been gravely wounded or strongly distinguished themselves in battle.

The most junior award of this type is the medal For Courage followed by the Medal of Suvorov (it is often given to Russian soldiers wounded in Donbas as we reported before [1] [2]).

Those killed in action receive the Order of Courage posthumously. However in this case, it is an ordinary wounded soldier not even an officer. Apparently, taking Debaltseve was of a strategic importance for Russians since the participants of the battle were awarded medals two classes higher than usual.

Another Russian soldier decorated with a state military medal by the decree bearing Putin’s signature vivdly demonstrates that “there are no Russian soldiers in the war in Donbas”. Those soldiers who, sometimes get burned in their tanks in Ukraine and then receive state awards. Sooner or later, we will know precisely how many orders and medals were given for the war with Ukraine to Russian soldiers.

This publication was prepared on the basis of an OSINT investigation of InformNapalm volunteer intelligence community. Author: Anton Pavlushko , translated by Volodymyr Bogdanov , edited by Artem Velichko