Radio monitoring a gunman from “Luhansk Republic”: “We bombarded civilians…” 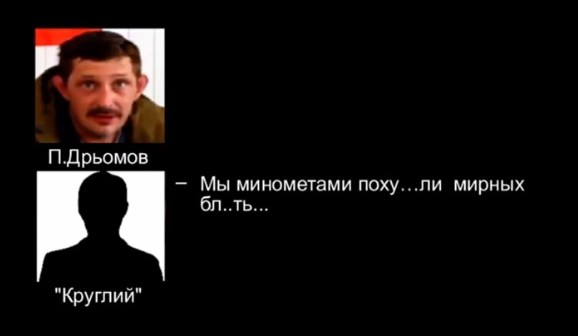 Security Service of Ukraine (SSU) has released more proof of the terrorists’ attacks on their own populace. A gunman with the code sign ”Round” reported to the leader of the “Stakhanovite Cossacks of the Luhansk Republic”, Pavel Dremov. He told Dremov about the bombardment of the city of Zolote in Popasna raion of Luhansk Oblast.

During the phone conversation, “Round” reports to Dremov about the terrorists who mortared four houses with civilians in Zolote city and that there are victims among the local population.

Dremov’s panic is palpable during the phone report, because he know that this confession could be overheard by Security Service of Ukraine.

And well he should. Dremov himself had recently boasted to a handler that heavy armament and materiel would soon be arriving from the Russia Federation. The SSU published a transcript of this phone call as well, and the InformNapalm team conducted an insider investigation on the basis of that transcript and identified the man in that conversation with code sign “Tambov” as a high-ranking Russian officer, a curate of the so-called “militias of LNR”.

Security Service of Ukraine received evidence of the violation of the regime of silence by an armed illegal formation (terrorists) of “LPR”.

01.01.2015. Zolote city in Popasna raion of Luhansk Oblast was bombarded by terrorists of “LPR”. Civilians had died.

Dremov: Where are they firing at?

Oleksandr: We shelled from mortars a peaceful [area], censored

Oleksandr: I do not know, four houses censored are blown

One Response to “Radio monitoring a gunman from “Luhansk Republic”: “We bombarded civilians…””