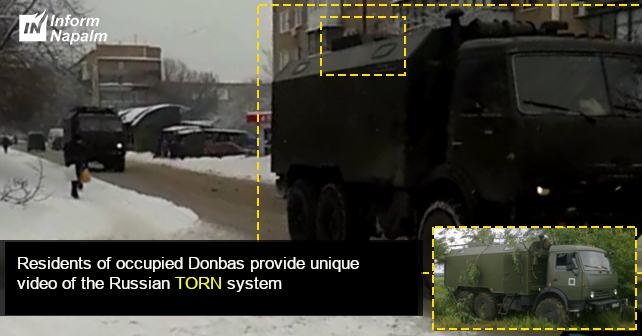 At the risk for their life and health, local residents in the Ukrainian territories occupied by hybrid Russian troops continue to transmit important intelligence information, photos and video evidence of the presence of the latest Russian technology in Donbas. Thus volunteers of InformNapalm volunteer intelligence community received a unique video shot in the winter of 2019 in the occupied city of Makiivka, Donetsk Oblast. The video features a vehicle of the modern Russian signals intelligence system TORN. InformNapalm volunteers have repeatedly identified this system in Donbas since 2015. We found photos of TORN in the social media accounts of militants, geotagged and published the coordinates of the deployment of these Russian systems near Donetsk airport and at the Sparta gang military base in Donetsk. However, this is the first time TORN system has been captured on video.

This video was shot by a local resident of Makiivka in January 2019. However, it has been made public for the first time only now and in an abridged version. The InformNapalm community has a full version of the video at its disposal, but the editorial team decided to redact it before publication to protect the source. The video shows the Russian TORN system vehicles drive through Makiivka on Heroyiv Stalingrada Street in the direction of Manuilsky Street (Google map).

To compare the elements of the system, we used on the left a photo from our previous features about the TORN system, and on the right – a still-frame image from the video.

It is worth mentioning that that on February 10, 2019, the OSCE Special Monitoring Mission also reported that the latest Russian TORN signals intelligence system on the KAMAZ truck chassis was spotted near an apartment building in Novogrygoriivka. 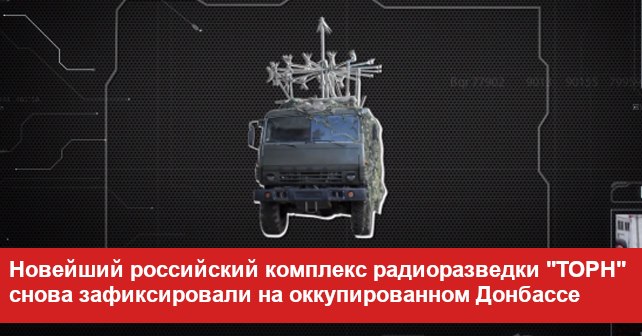 And in July 2019, a video appeared of a Ukrainian Armed Forces unit destroying a TORN vehicle near the village of Maiorove, Donetsk Oblast on June 29, 2019. InformNapalm volunteers fact-checked the information on the destruction of the system and determined the exact coordinates of the fire engagement: 47°29’50.2″N 37°58’31.6″E. 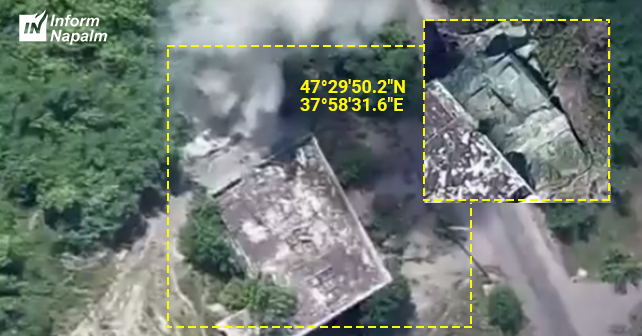 Let us recall that in July 2019, residents of the occupied Donbas also provided InformNapalm volunteers with unique photos of the Russian system 1L259 Zoopark-1. The uniqueness of the footage provided by residents of Makiivka is that this is the first case when not individual vehicles, but the entire system, was spotted in Donbas. The system consists of a 1L259 radar station on MT-LBU chassis, a maintenance vehicle (MTO, 1I30) mounted on a Ural-43203 truck, the ED30-T230P-1 RPM1 power station on a 2-PN-2 trailer, as well as autonomous orientation and topographic surveying systems. 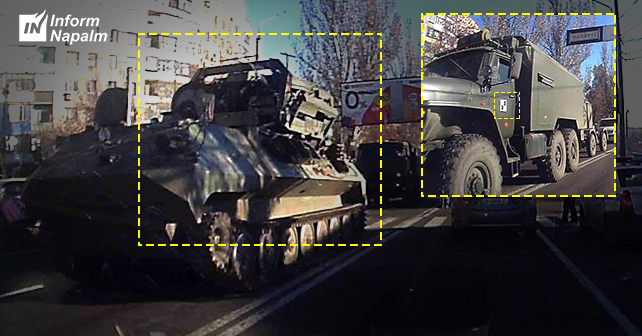 The publication of this footage became a powerful informational occasion, it was widely shown in the media and shared on social networks. It is noteworthy that many Russians commented on the footage and were very outraged by the fact that local residents of the occupied territories of Donbas transmit data on the movement of Russian equipment.

Russia continues to supply weapons and use its latest military equipment in the occupied Donbas. This is evidenced not only by photo evidence from the social media accounts of Russian militants and by the OSCE SMM reports, but also by photos and videos that local residents hand over to Ukrainian volunteers. InformNapalm volunteers are very grateful to the locals of the occupied Makiivka for contacting us and providing important video evidence of Russian military aggression against Ukraine. Your photos and videos bring Russian soldiers and officers closer to the dock at the international tribunal.

United we stand. Ukraine will prevail.