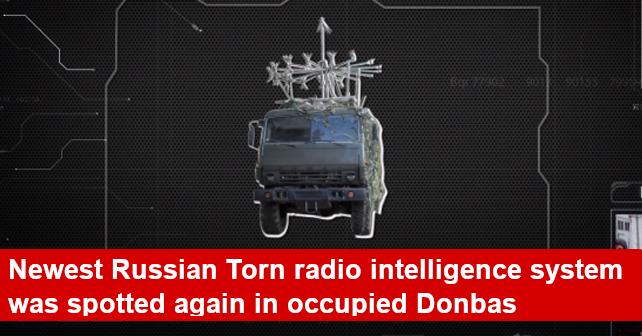 On February 10, “an SMM mini-UAV spotted two IFVs (BMP-1) (of which one was parked in the yard of a residential house) and a TORN radio intelligence system on a truck (KamAZ) parked near a residential house in Novohryhorivka,” said in the report.

Let us remind you that back in 2015, volunteers of InformNapalm international intelligence community already presented photographs of Russian Torn and Taran radio intelligence systems that were located on the militants’ Sparta base in occupied Donetsk.

On September 1, 2015 InformNapalm team reported on a detected Torn radio intelligence system next to a damaged multistory building at the address: 11-A Vzletna Street, Donetsk, in a close proximity to the Donetsk Airport.

For more information on the Russian military equipment recorded in the occupied Donbas, see the OSINT research database created by InformNapalm community.

It’s good that OSCE field observers are beginning to more actively present the fact proving the Russian aggression against Ukraine, although sometimes with a long delay.

The material prepared specifically for InformNapalm.

an active link to the the original article is required for any further use or reproduction.
(Creative Commons — Attribution 4.0 International — CC BY 4.0 )
Repost and share with friends!
For notifications about InformNapalm investigations follow us on
Facebook and Twitter