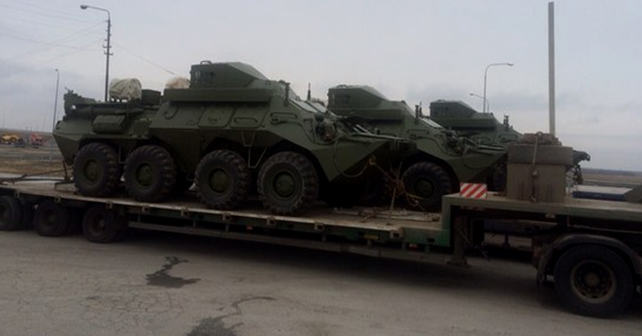 The InformNapalm volunteer intelligence community continues to populate the database of the weaponry and equipment of the Russian Army identified in Donbas. As of March 10, 2017, the database v1.6 already contained 42 pieces of equipment, which had never been supplied to Ukraine and could not have been captured by the enemy. It proves that the arms have been directly supplied from Russia for the needs of the Russian occupation forces, Luhansk People’s Republic (LPR) and Donetsk People’s Republic (DPR) terrorist groups via uncontrolled portions of the Russian-Ukrainian border.

In this OSINT investigation we are presenting the information about another type of military equipment: R-149MA1 unified command vehicle (UCV) seen at the Ukrainian border point Marynivka during the active phase of the Russian Army invasion on the territory of Ukraine in 2014. Senior Russian military officers were spotted in the same area and in the same time period, which suggests that the command vehicles were not merely supplied to the militants by the Russian “surplus shop”, but were actually operated by the regular Russian troops in the territory of Ukraine.

Unified command vehicle (UCV) R-149MA1 was developed under the Presidential Decree on the establishment of the Unified Tactical Control System for the Russian Armed Forces. It is designed to ensure stable personnel management and communication by the brigade/regiment command on the move as well as in stationary mode. This vehicle can be used on the operational (battalion) command level by the commanders directly on the forefront command posts to manage the units and forces according to the current troops deployment tactics.

A UCV makes part of the Unified Tactical Control System and can be used both as an independent combat unit and also coupled with the equipment of the subordinate (company, platoon, squad) and higher level (regiment, brigade) command units. The subordinate level machine is R-149MA3. This is basically a regular infantry BTR-80 armored personnel carrier, equipped with additional soft- and hardware: Russian-made RAMEK computer, AK-3.5 circuit switch, additional communication equipment and a GLONASS navigator. At the battalion level, two R-149MA1 vehicles are used by the chief of staff and the battalion commander, and one R-149MA3 is used by the communications platoon commander. Besides these three vehicles, one more machine is required – MP-1IME, the mobile communications unit for the establishment of data networks at the battalion level. At the regiment or brigade level, this role is performed by MP-2IME.

In 2014, the Russian military loved to be photographed at Marynivka border point, and one of these photos featuring the Russian R-149MA1 came in handy. It was made by Ivan Zaika (profile on the Myrotvorets database), a collaborationist who had previously served in the Ukrainian border troops, military unit 1476, Yalta, Crimea. On social networks, he calls himself Ivan Dym (Smoke). 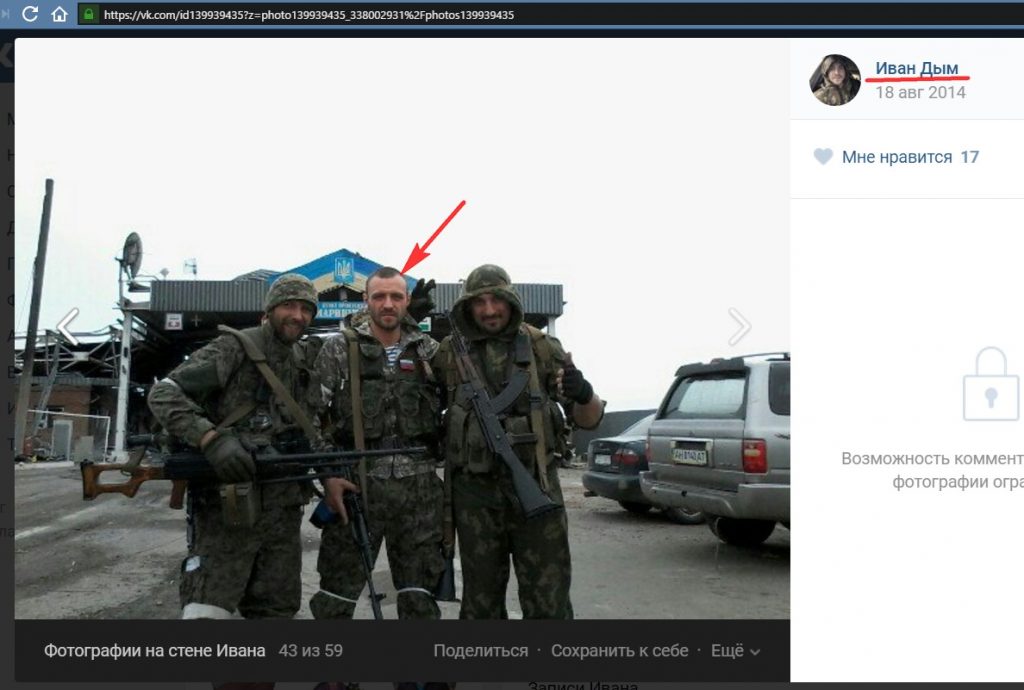 The photo made at Marynivka border point and posted on VK social network on August 18, 2014, helped us identify the Russian R-149MA1 UCV entering the Ukrainian territory behind the backs of the militants. 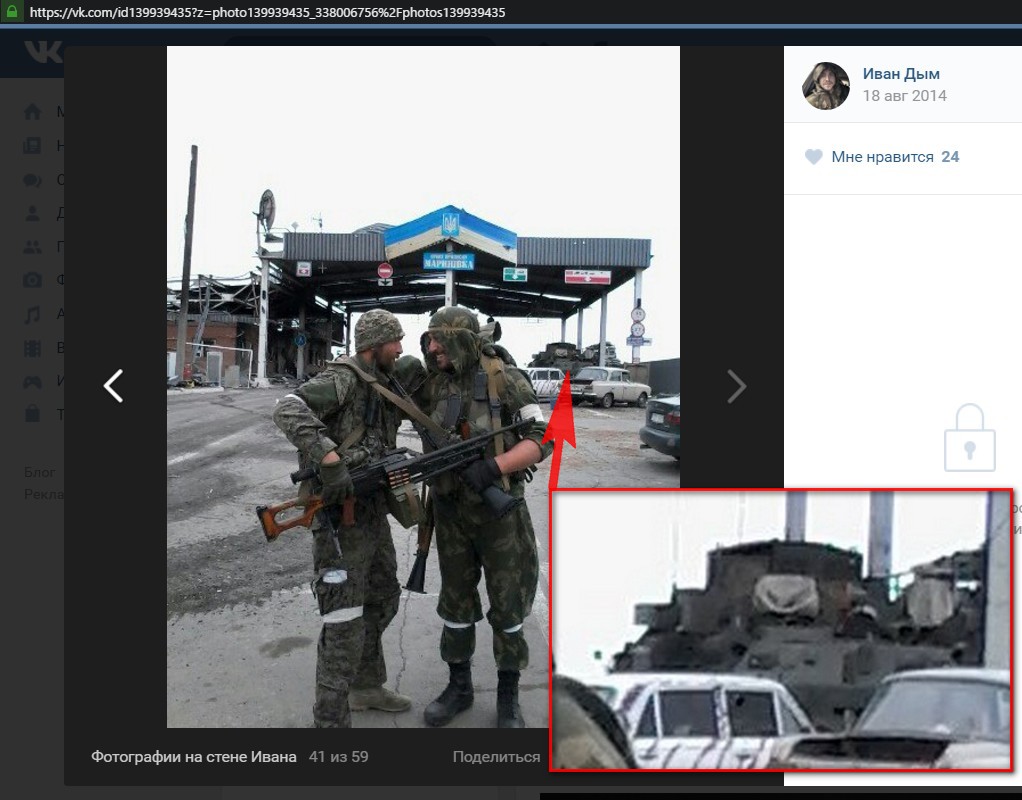 Let us compare a part of this Marynivka photo with a higher-quality picture of the Russian R-149MA1. 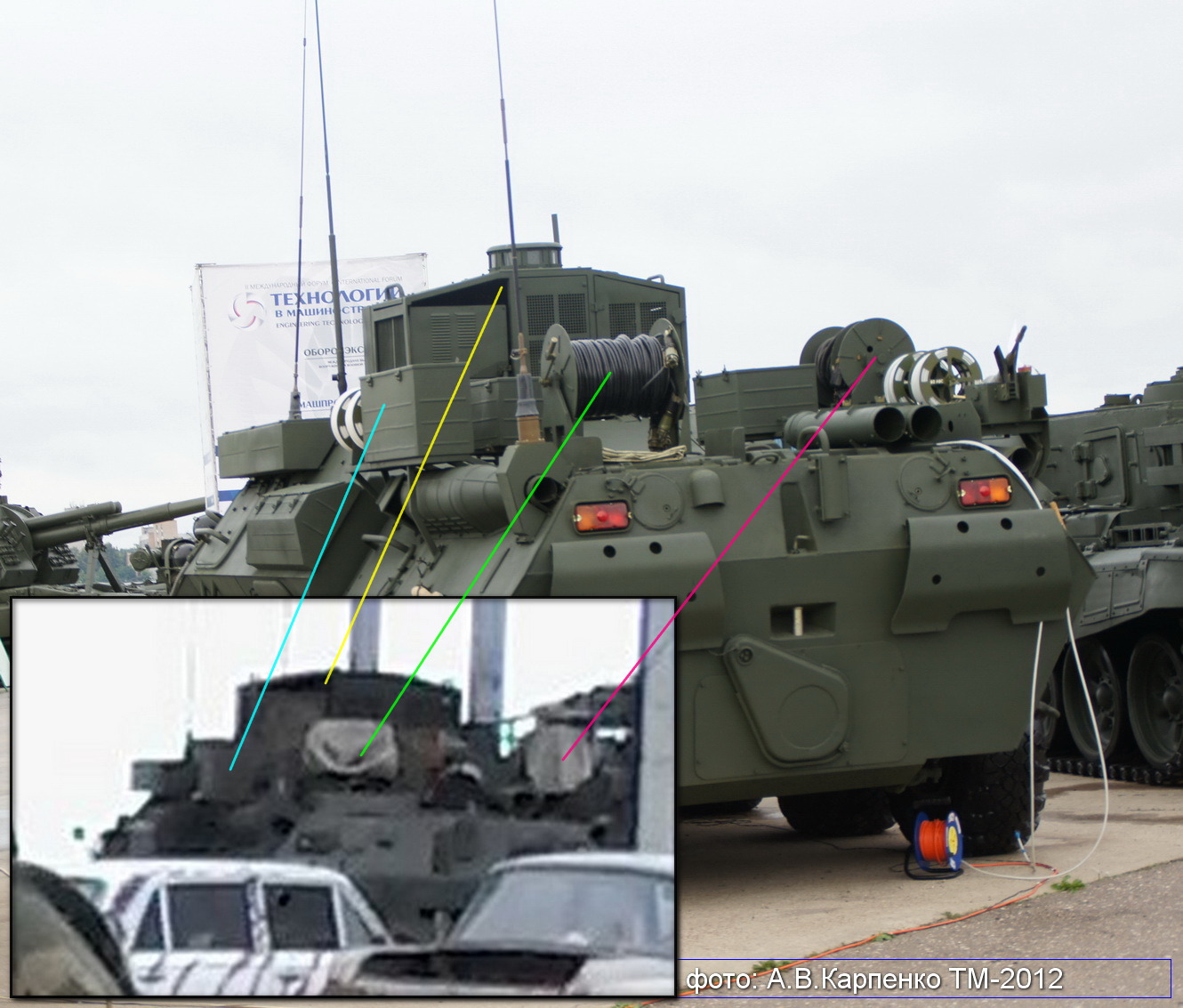 For the credibility of the collected information and to reliably enter another type of equipment into the database of identified Russian weaponry and equipment we needed additional pictures and sources. In February 2017, @askai707 tweeted a photo with Russian militants posing at the border point in front of a wrecked Humvee. On the photo, an upper part of the Russian R-149MA1 (marked with a red arrow) is visible at a distance. 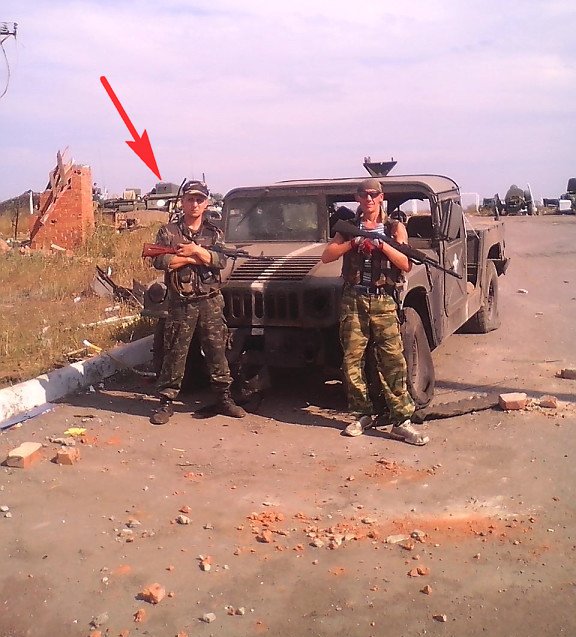 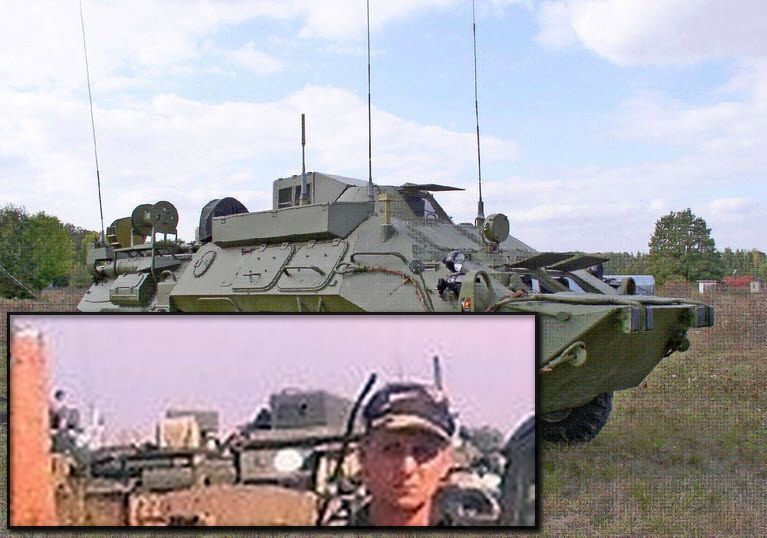 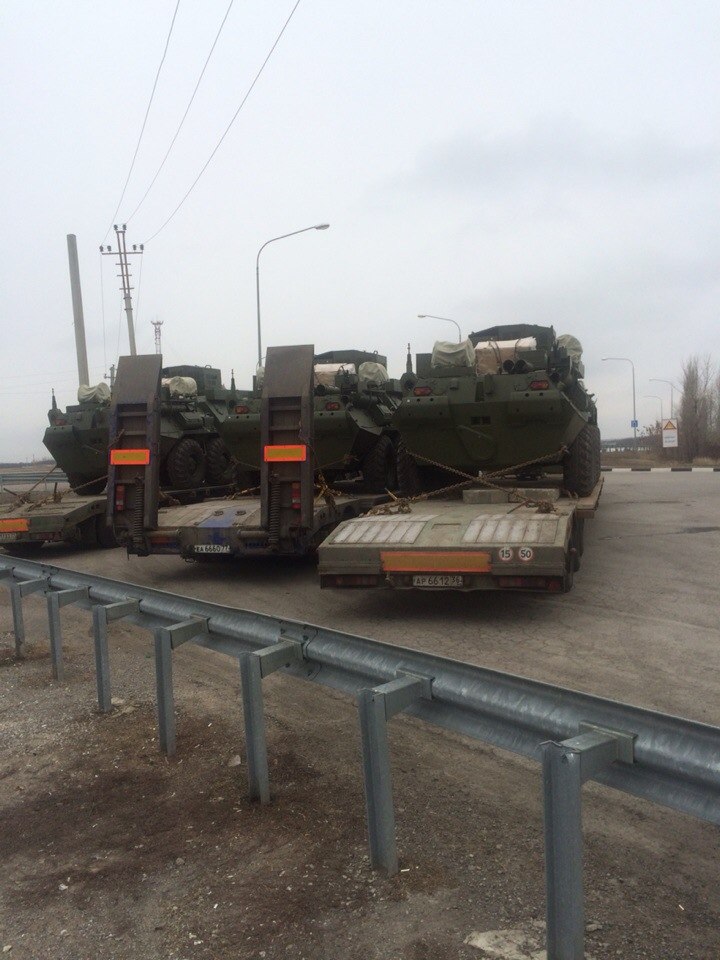 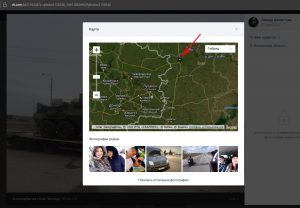 To determine the time when the photos of the Russian UCVs were taken, let us use Google Earth Pro archived imagery and correlate it with the photo with the Russian militants posing in front of the wrecked Humvee at Marynivka border point.

On the satellite image from August 16, 2014, the spot marked with a red arrow is still empty.

On the image from August 30, 2014 the Humvee is already visible there.

The image from September 05, 2014 is the sharpest, showing the border point, the Humvee and other significant details. For comparison, we took a frame from a Russian video titled Marynivka Stepanivka broken machinery of the Ukrainian Army, dated September 16, 2014, with anti-tank concrete barriers visible through the windshield of the jeep. For those willing to study this material in more detail, we should like to note that the video shows the Humvee from almost all sides.

However, on the satellite image from September 14, 2014, the Humvee is no longer there.

We can reliably conclude that the Humvee stood at the marked location between August 18, 2014 and September 5, 2014. Hence the photo with the Russian militants, posing with the Humvee at the border point with the Russian R-149MA1 looming behind, was also made in this period of time.

Many Russian military men were photographed with that Humvee, but one photo deserves a special mention. It features Vitaly Kulgavyuk a Russian colonel of the 18th Motorized Rifle Brigade (18th MRB) of the 58th Army of Southern Military District (identified by @askai707).

Here are the photos posted on social networks on August 28, 2014 by Lilia Osmanova (related to colonel Kulgavyuk). 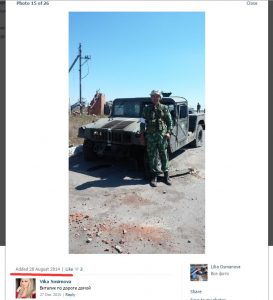 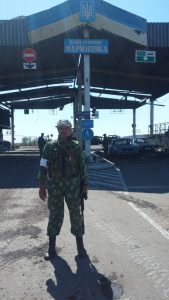 At the beginning of this investigation, we cited the description of the machine: “The unified command vehicle (UCV) R-149MA1 is designed to ensure stable personnel management and communication by the brigade/regiment command on the move as well as in stationary mode.” At the same time, we see a Russian senior officer and Russian specialized command vehicles at the particular uncontrolled border point during the specific period of the active phase of the Russian invasion. These findings are backed by photos, videos and satellite imagery, positively identifying the presence of R-149MA1in the invasion area and strongly suggesting its use by Russia in the war against Ukraine.

This publication was prepared by Vidal Sorokin specially for InformNapalm, translated by Andrii Gryganskyi, edited by Artem Velichko

(CC BY 4.0) This information has been specially prepared for InformNapalm.org, an active link to the authors and our project is obligatory for any reprint or further public use of the material

We call on our readers to actively share our publications on social networks. Broad public awareness of these investigations is a major factor in the information and actual warfare.
For notifications about InformNapalm investigations follow us on Facebook and Twitter.