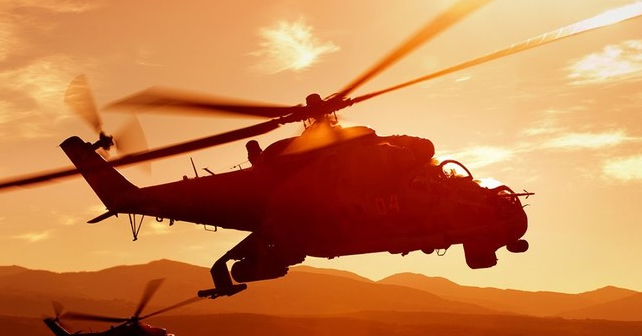 On December 31, 2017, a Russian Mi-24 combat helicopter that participated in the operation of the Russian Aerospace Forces in Syria crashed. Both crew members were killed. Anton Pavlushko, a volunteer of InformNapalm international intelligence community, reported about this on January 2nd on his Facebook page. The Russian media kept silent.

Another military helicopter crashed in Syria

At the end of last year, Syrian sources wrote about a Russian military helicopter, which, for technical reasons, fell somewhere in Hama province while escorting a convoy, the crew died:

It took two days and now on Twitter there is news about the Russian helicopter and the names of the pilots who died:

“On December 31, 2017, escorting a convoy, a Russian MI-24 helicopter collided with strained wires and crashed near the city of Zara, Syria. The crew, Matveev and Kulish, both died.

Major Artem Nikolaevich Kulish, born August 19, 1982, from Novosibirsk, died in Syria on December 31, 2017, during the crush of the MI-24 helicopter near the city of Zara.”

Now, find this news in the Russian media?

On January 3, this information was officially confirmed by the Russian Ministry of Defense, claiming that a technical malfunction caused the crash.

On December 31, according to the Directorate 4 Telegram Channel, one of the militants’ sources claimed downing a Russian helicopter with a crew on board. The channel also posted audio talks, which allegedly belong to the militants.

On December 11, 2017, Russian President Vladimir Putin paid an official visit to Syria and in front of cameras of state-run television channels once again announced the withdrawal of Russian troops from the country. Nevertheless, Russian soldiers and officers continue to die in the military operation, which is supposedly officially completed. InformNapalm collected data about several false statements of the Russian military and political leadership regarding the withdrawal of their troops from Syria.

Read also: 48,000 Russian soldiers passed through Syria, many of them also fought in the Donbas.

Catastrophes of the Russian Aerospace Forces in Syria

In November 2015, Russia lost a Su-24 bomber that was shot down by a Turkish F-16 fighter due to violation of the Turkish airspace. During the rescue operation searching for its pilots, a Mi-8 helicopter was also shot down from the ground. In November 2016, a Russian MiG-29K fighter crashed in the Mediterranean soon after takeoff from the Admiral Kuznetsov aircraft carrier off the coast of Syria. On December 2016, in the Mediterranean another Su-33 fighter crashed during the landing on the Admiral Kuznetsov. In August 2016, in Idlib province, a Mi-8 helicopter was shot down from the ground. In April 2016, a Russian Nochnoy Okhotnik (Night Hunter, NATO reported name Havoc) Mi-28N helicopter crashed near the city of Homs. In July 2016, a Syrian Mi-25 helicopter, piloted by the Russian crew, was also shot down. In October 2017, a Russian Su-24 front-line bomber crashed during takeoff from Khmeimim air base in Syria. And this is only a part of the known losses of the Russian Aerospace Forces that leaked in the media.

Recall that in September 2016, the InformNapalm presented materials and infographic with personal data of 116 officers of the Russian Aerospace Forces, who took part in the bombing of civilians in Syria. This information aroused great public resonance, was translated into 13 languages ​​and was shared by international media.

This publication was prepared by Roman Burko specially for InformNapalm.