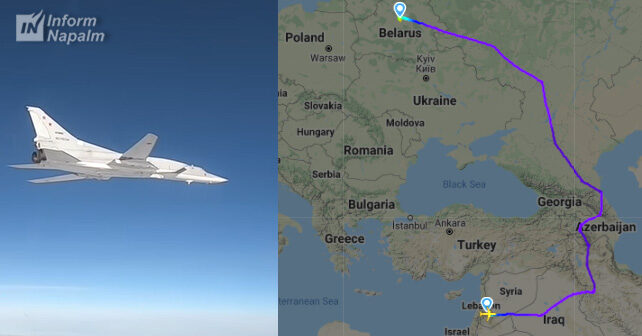 Volunteers of InformNapalm international intelligence community noticed that over the past 7 days, the private Syrian airline Cham Wings Airlines has operated 4 direct flights from Damascus International Airport to Minsk. The peak of flying was observed on November 7. And already on November 8, the situation on the Polish-Belarusian border flared up unprecedentedly, when a large group of migrants, accompanied by Belarusian security officers, undertook several attempts to break through the border into Poland. Border provocations continue.

Apparently, these frequent flights are associated with the massive trafficking of illegal migrants from the Middle East to Belarus, whom the Kremlin, with the hands of the Belarusian dictator Alexander Lukashenko, uses for a hybrid operation against NATO countries, in particular against Poland and Lithuania. 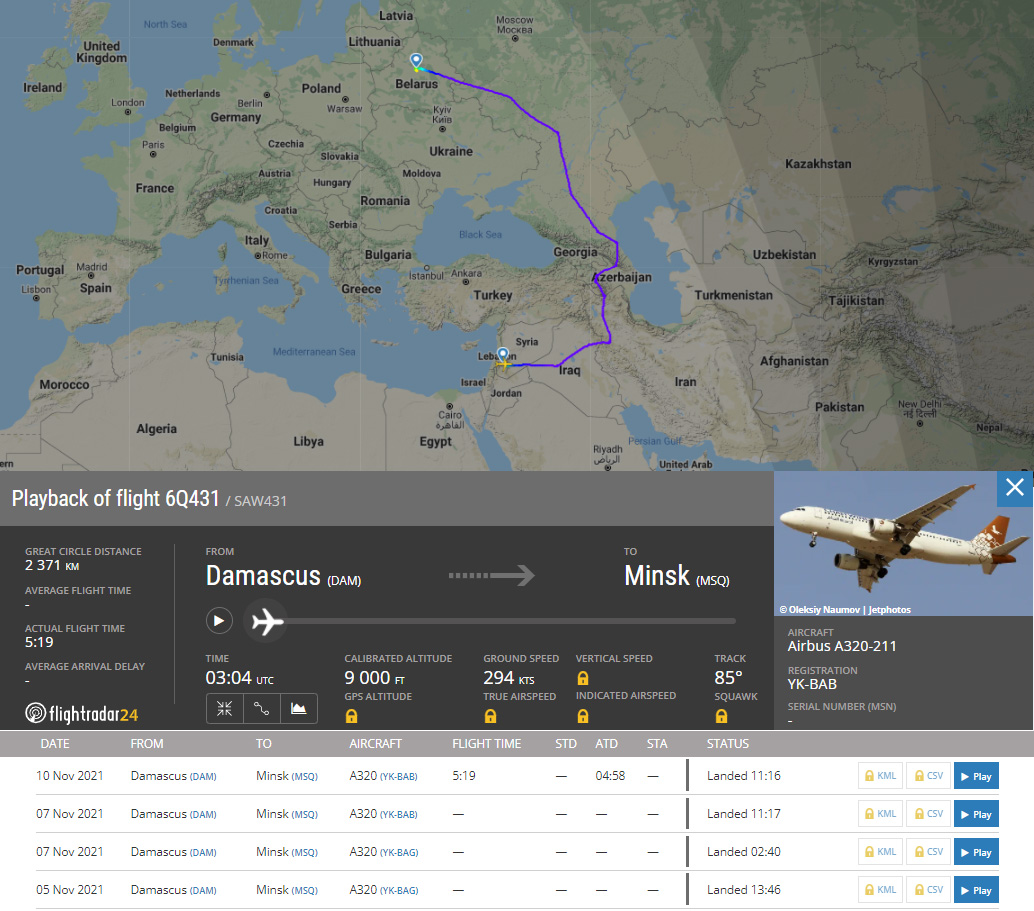 According to the Flightradar24  data, the aircraft of the Cham Wings Airlines with the registration YK-BAG and YK-BAB made 2 flights each to Minsk during the period from 5 to 10 November.

Why exactly could this Syrian airline be involved in a hybrid operation of intelligence agencies of the Russian Federation and the Republic of Belarus? The answer to this question can be found in the open sources. It is known that Cham Wings Airlines has been under the US sanctions since 2016 for participating in the airlifting of weapons and militants for the Syrian dictator Bashar al-Assad. And in 2021, Ukraine also introduced its sanctions against Cham Wings Airlines. According to media reports, the aircraft of this airline operated prohibited flights to the occupied Crimea, and were also used to airlift mercenaries of the well-known Russian proxy group Wagner PMC from Rostov-on-Don to Syria.

Read more in InformNapalm’s report on the role of Russian PMCs in armed conflicts.

Of course, these flights are not the only way to traffic refugees from the Middle East to the borders of Poland and Lithuania. Interestingly, on the eve of the active phase of this hybrid special operation, on November 4, 2021, Vladimir Putin and Alexander Lukashenko signed the so-called “Decree of the Union State” containing 28 programs, including the concept of defense and migration cooperation between  the Russian Federation and the Republic of Belarus.

Hybrid military operation and Tu-22M3 in Syria and Belarus

On November 10, the Ministry of Defense of the Republic of Belarus issued reports and videos of a joint air patrol with Russia along the state border of Belarus in the western and northwestern directions. The patrol involved two Russian nuclear-capable strategic bombers Tu-22M3.

Interestingly, on November 10, against the backdrop of the special operation near the Polish border, a statement was made on the Russian propaganda talk show 60 Minutes claiming that the collective West should accept all refugees on the border of Belarus. The propagandists stressed that this is “the direct responsibility of the West, which bombed the houses of peaceful Syrians.” In the context of these statements, volunteers of InformNapalm noticed that Russian Tu-22M3 bombers with tail numbers 22 (red), registration number RF-95956 and 24 (red), registration number RF-94154 took part in the patrol flight on November 10.

At least one of these airplanes, along with its crew members, participated in the Russian military operation in Syria. 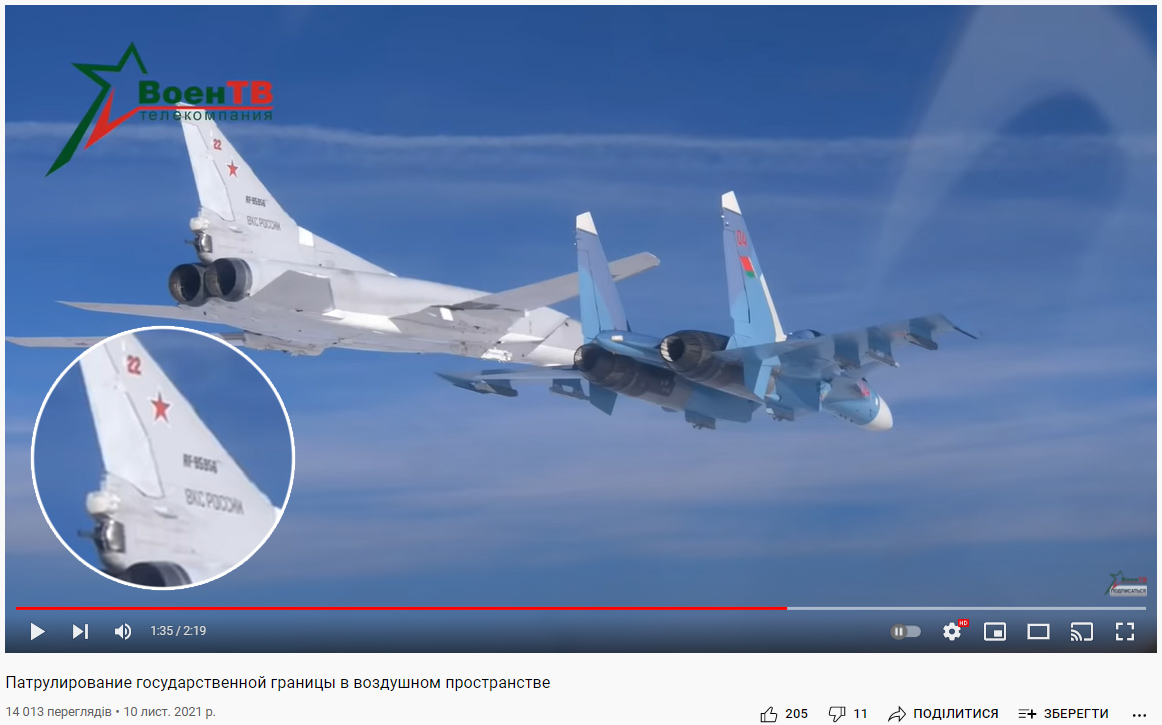 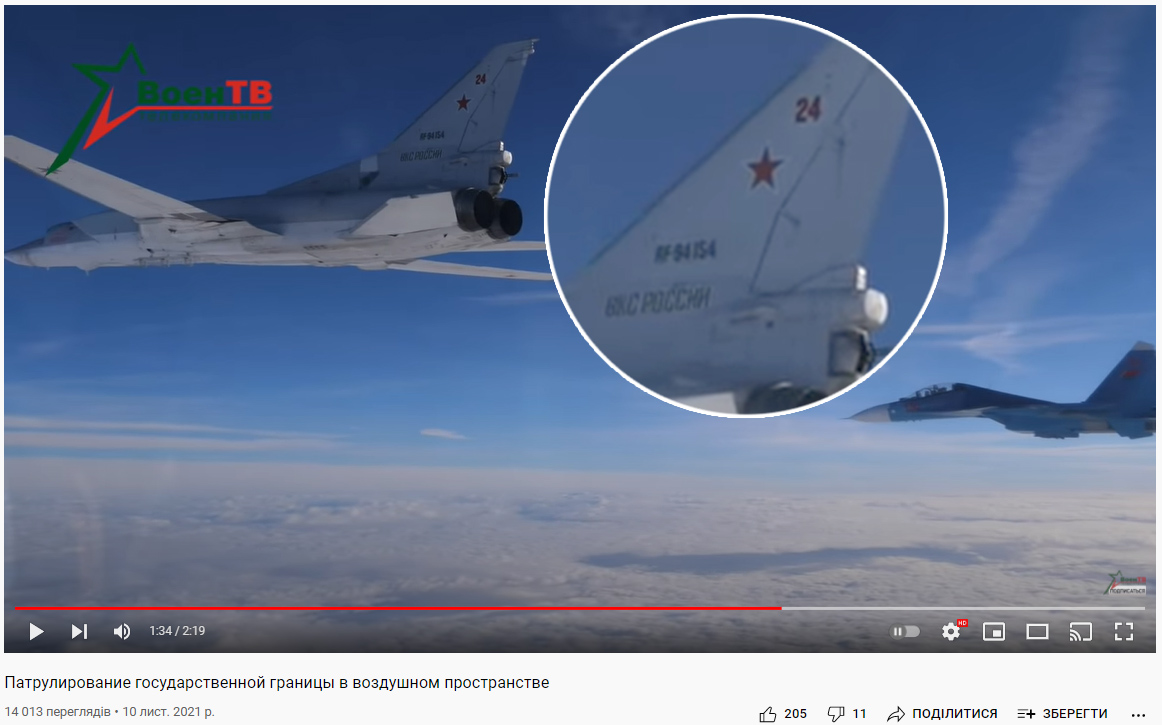 International human rights organizations have repeatedly published findings showing that it was the Russian Air Force that targeted civilians and rescue workers in Syria, and also used unguided shells, cluster and even bunker bombs prohibited by international law to strike residential areas.

In 2016, InformNapalm collected data of 116 officers of the Russian Air Force who participated in the missile and bomb air strikes in Syria. Russian propaganda called these publications ” a dangerous leak of classified data.”

In June 2021, InformNapalm pointed out that the formation of a new division of the Russian Army near the borders of Lithuania was going ahead of schedule. In August, Belarusian and Russian propaganda started the active phase of information support for hybrid attacks on Lithuania. In September, as part of the active phase of the large-scale military maneuvers Zapad-2021, provocations took place on the border of Ukraine and Belarus. And already in early November, new reports appeared about the build-up of Russian military equipment in Yelnya, 50 km from the border of Belarus and 200 km from the border of Ukraine. A week after these reports, the active phase of the hybrid operation of Russia and Belarus on the Polish border began.

All these processes, obviously, are components of a single Kremlin gamble. Russia is convinced that it has put the EU, and especially Germany, firmly on the Nord Stream 2 gas needle, so Moscow’s actions are becoming more insidious and aggressive. The military and political takeover of Belarus by the Russian Federation continues at a rapid pace. Belarusian dictator Alexander Lukashenko has become a complete puppet of Vladimir Putin.

Ukraine remains in the focus of the Russian aggression, and after the takeover of Belarus, the length of the border as a springboard for Russian aggression has increased significantly. In case of failure to break through the Polish border, Moscow, with the hands of Minsk, will probably redirect the hybrid attack by refugees towards Ukraine.