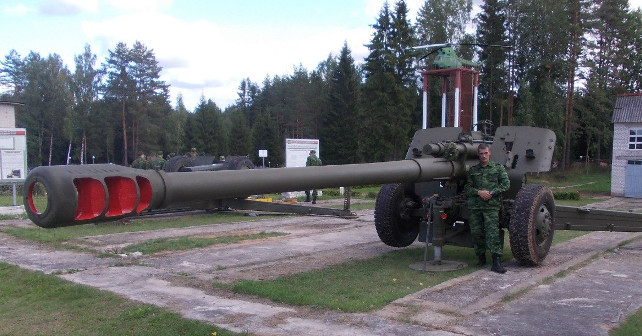 Mikhailovskaya Military Artillery Academy (St. Petersburg, Russia) conducted refresher courses for militants of the 7th Separate Motor Rifle Brigade of 2nd Army Corps at its training center located in the military town of Luga-3 in Leningrad Oblast. This is the conclusion made by the investigators of InformNapalm international volunteer community based on open sources.

When the occupation started, Andrei Grinchenko (born July 7th, 1986) lived in the city of Donetsk at Vozdushnaya Street, 8. He joined the Russian occupation troops almost immediately. In the summer of 2014 he participated in the battles for Shakhtarsk, in the winter of 2015 he fought against the Ukrainian Army Forces in Debaltseve.

On June 15, 2015, Grinchenko was awarded the Order For Military Valor III degree: 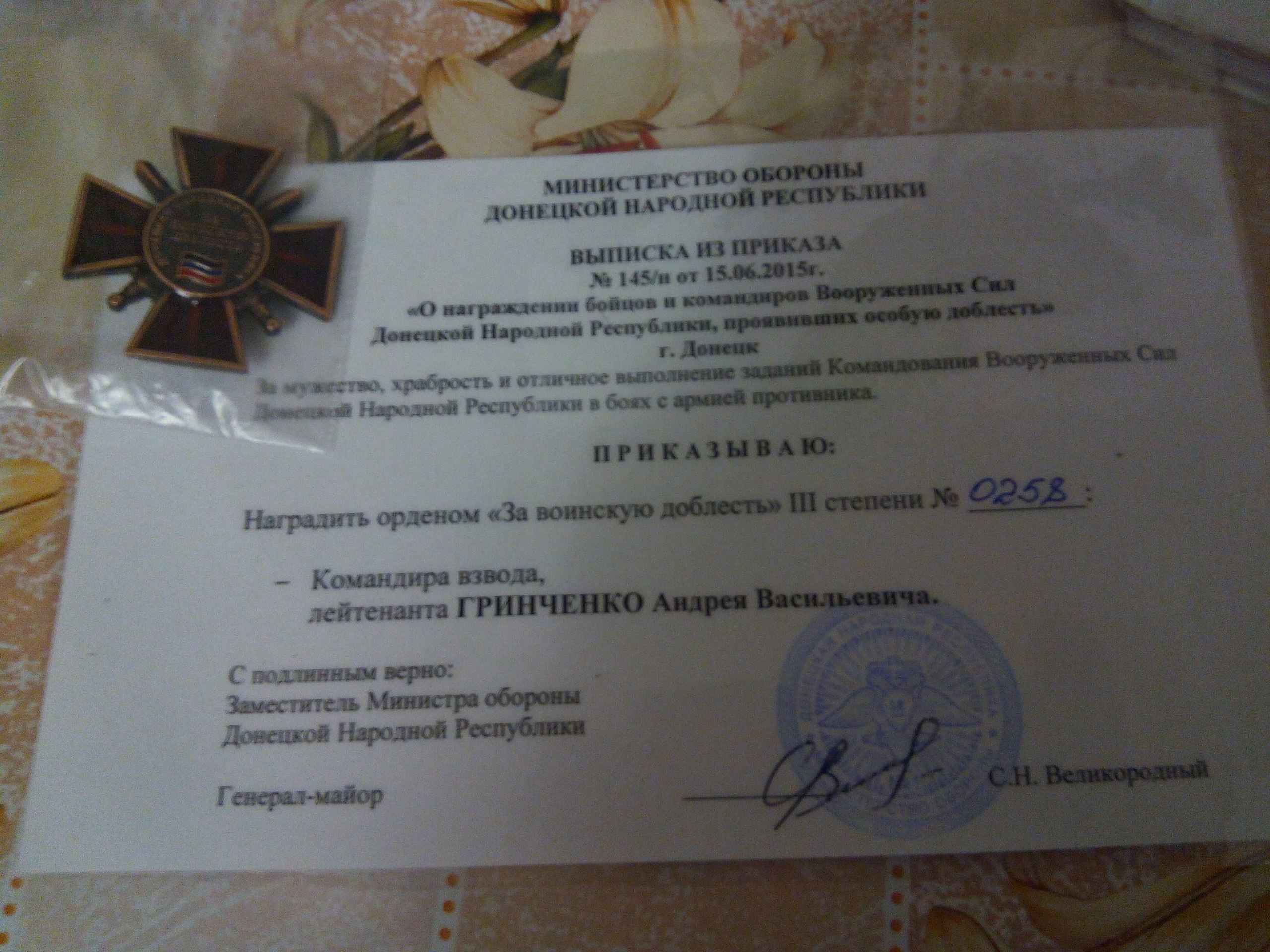 In the fall of 2015, Andrei Grinchenko was wounded in action. He lost one kidney and had a shell fragment removed from his leg, but he still needed another major surgery, which could be performed in St. Petersburg. A fundraiser was organized for his operation.

On December 14, 2015, Victor Peshkov, a coordinator of the Fenix Donbass organization, which collects funds for the treatment of militants, uploaded a video to his YouTube channel, where Andrei Grinchenko thanks donors for their donations.

After the surgery, Grinchenko did not even think about decommissioning. He returned to Donbas, and soon after that some very interesting photos showed up in his album.

One was taken in an aircraft with a group of people in uniform without insignia. Two members of the group, including Grinchenko, wear collar insignia of artillery troops: 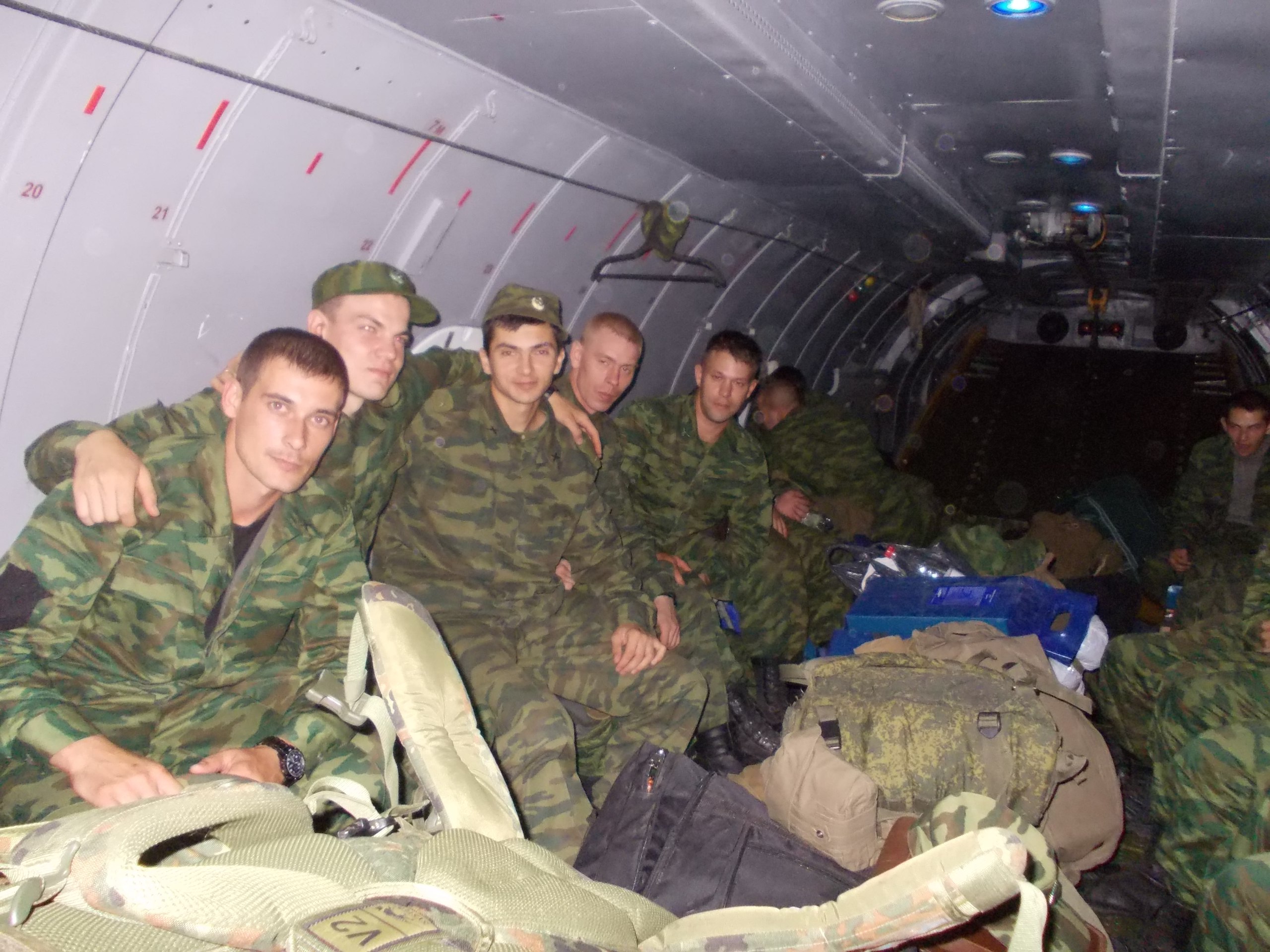 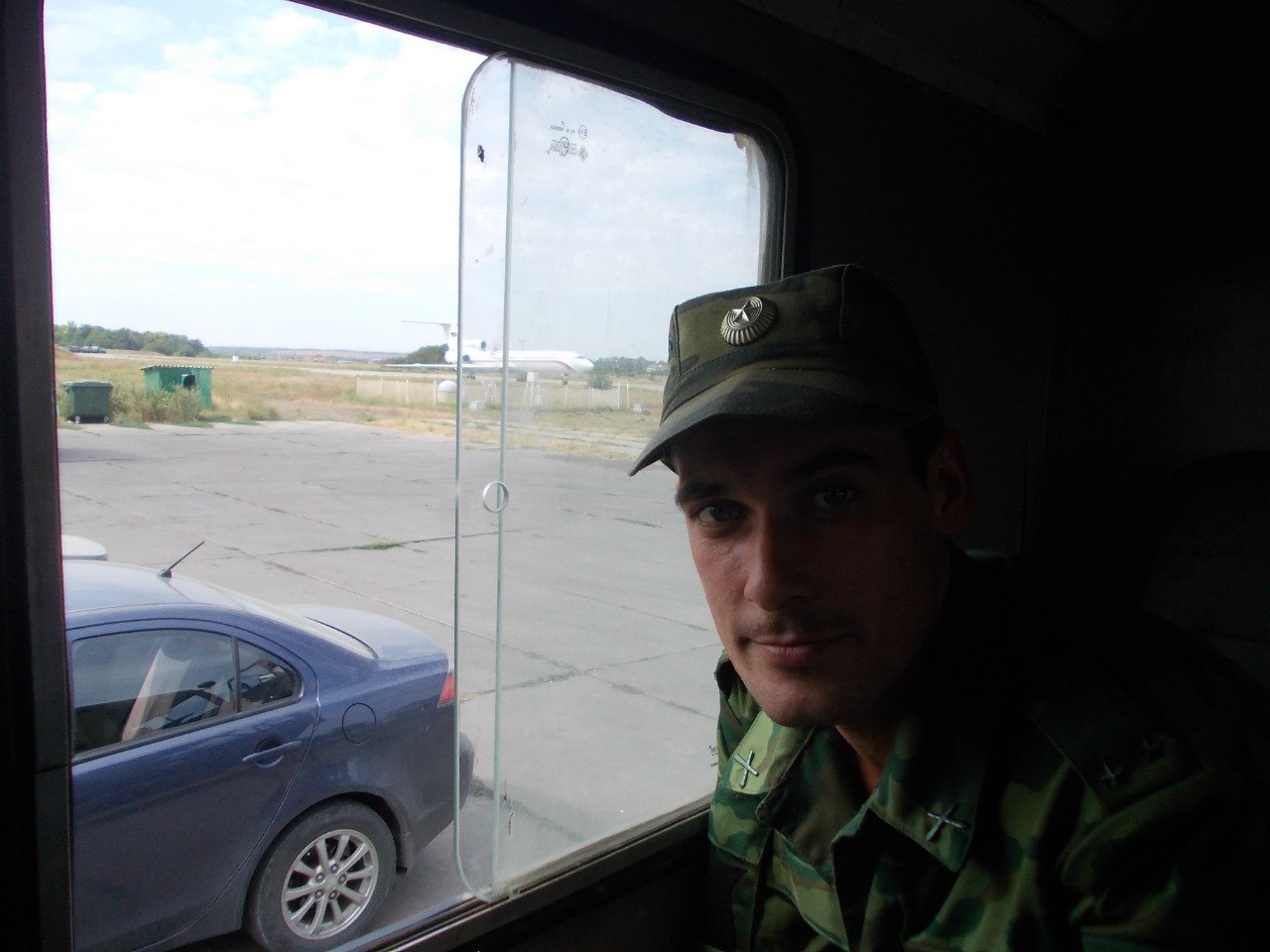 And also at some interesting military base, where Grinchenko was photographed next to a 152mm Msta-B howitzer: 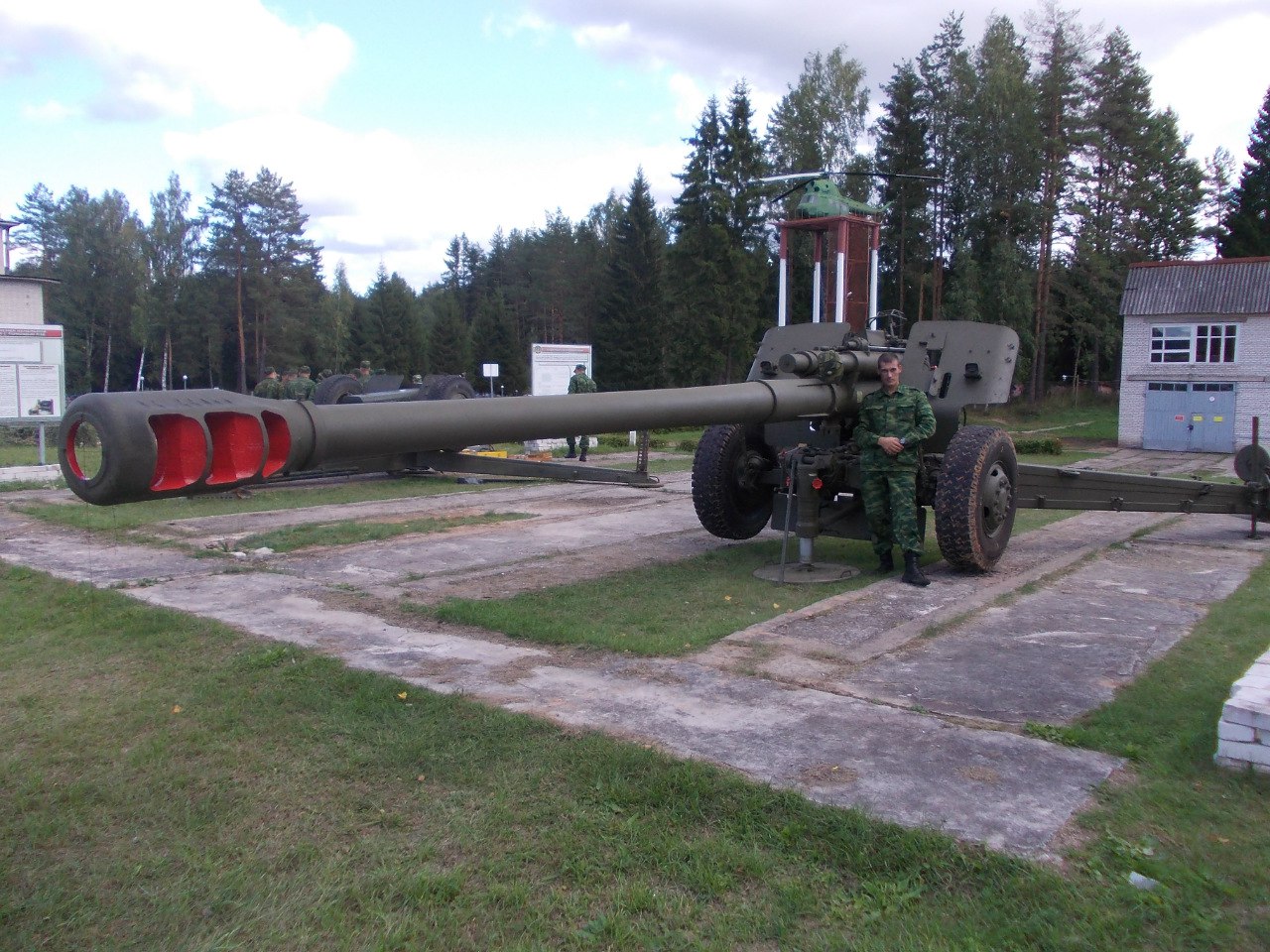 Note that the last photo has a training device with a MI-2 helicopter on top of it in the background.

Where did Grinchenko go, or rather flew? The training device was what ‘betrayed’ the answer. From the vegetation seen in the background, we guessed that the military base was located far away from the Donbas – in the northern part of Russia. After spending some time searching, we finally found this place with helicopter:

The helicopter is used to train cadets to adjust artillery fire and it is installed in the territory of the training center of Mikhailovsky Military Artillery Academy (MMAA) in Luga-3 in Leningrad Oblast. The coordinates of the location are 58 ° 45’48 “N 29 ° 47’58” E.

For greater clarity, we can point out several reference objects that prove that Grinchenko was photographed precisely in this place: 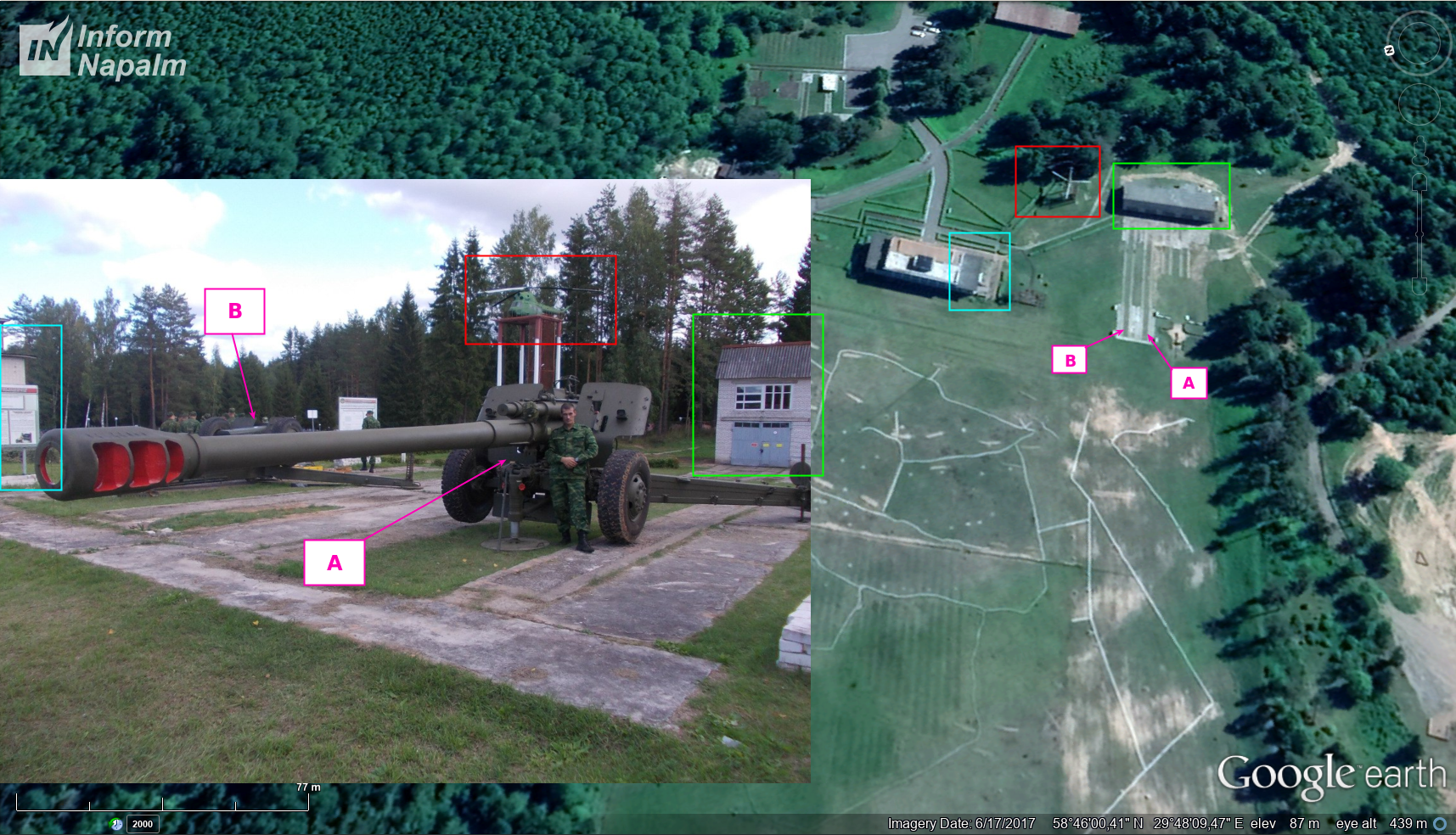 Another photo confirming that the militant was at the MMAA base (military unit 34035), is, oddly enough, a photo taken in a dining hall. 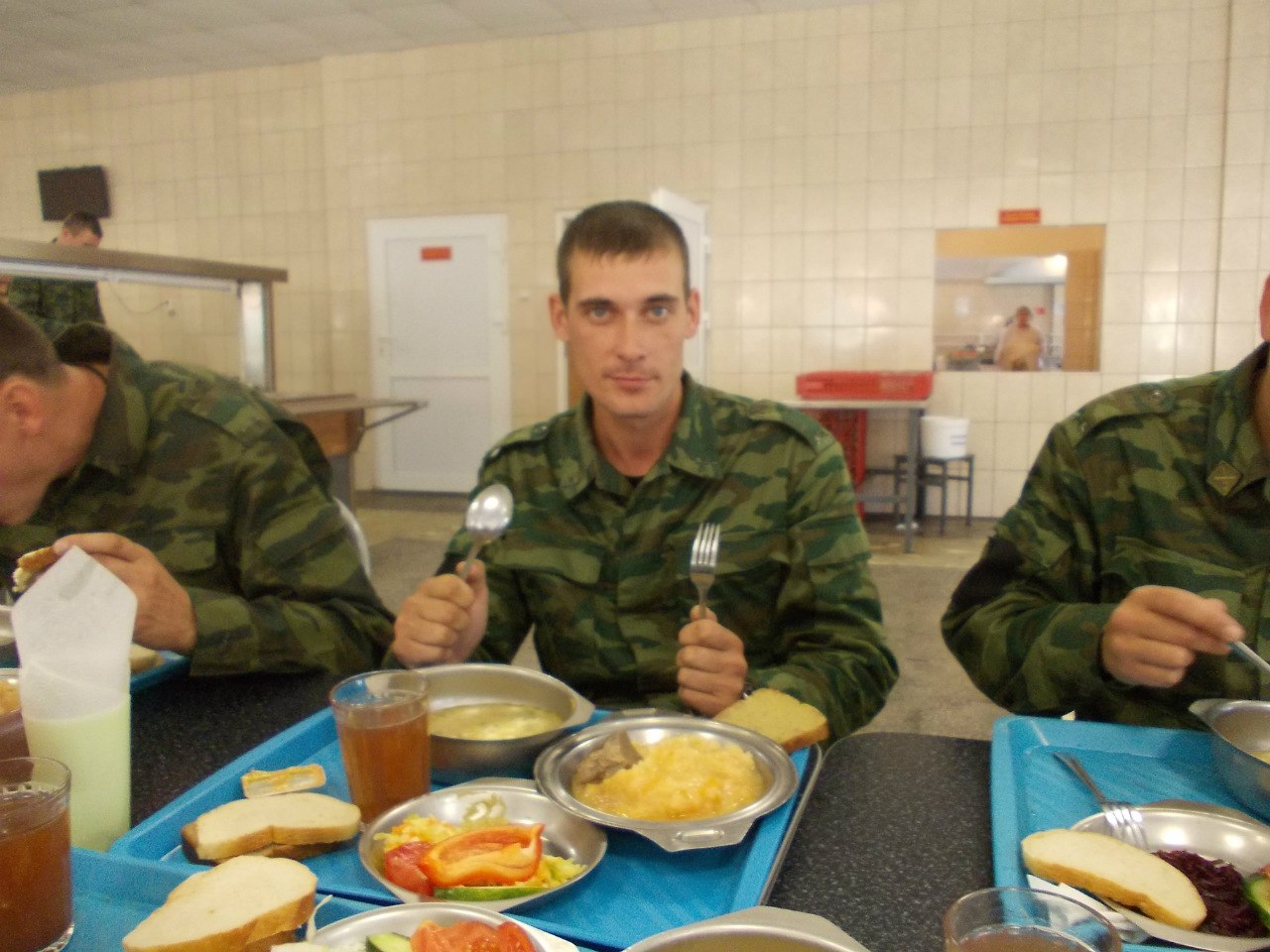 We found two videos online offering a good look of the dining hall of the MMAA training center in 2016 and 2017. From these videos, it is obvious that Grinchenko was in this dining hall. It is even easier to see that in a photo (archive photo), posted on the MMAA group page in VK. Below we compare the photos from the group with Grinchenko’s one: 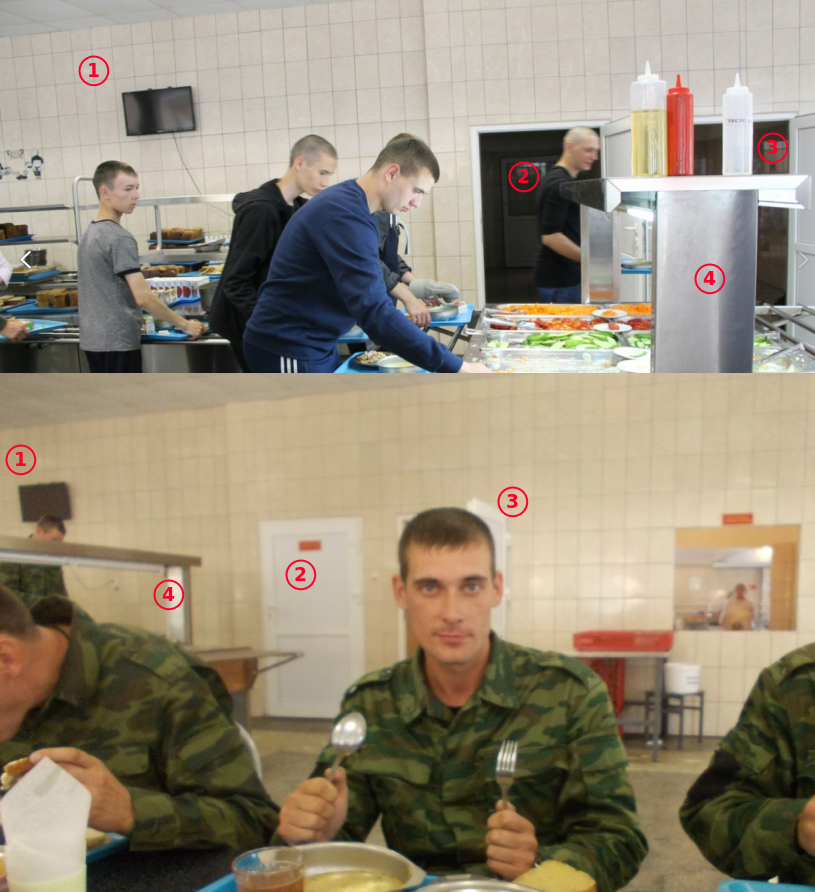 Note that the trays and plates in all photos and videos are identical: 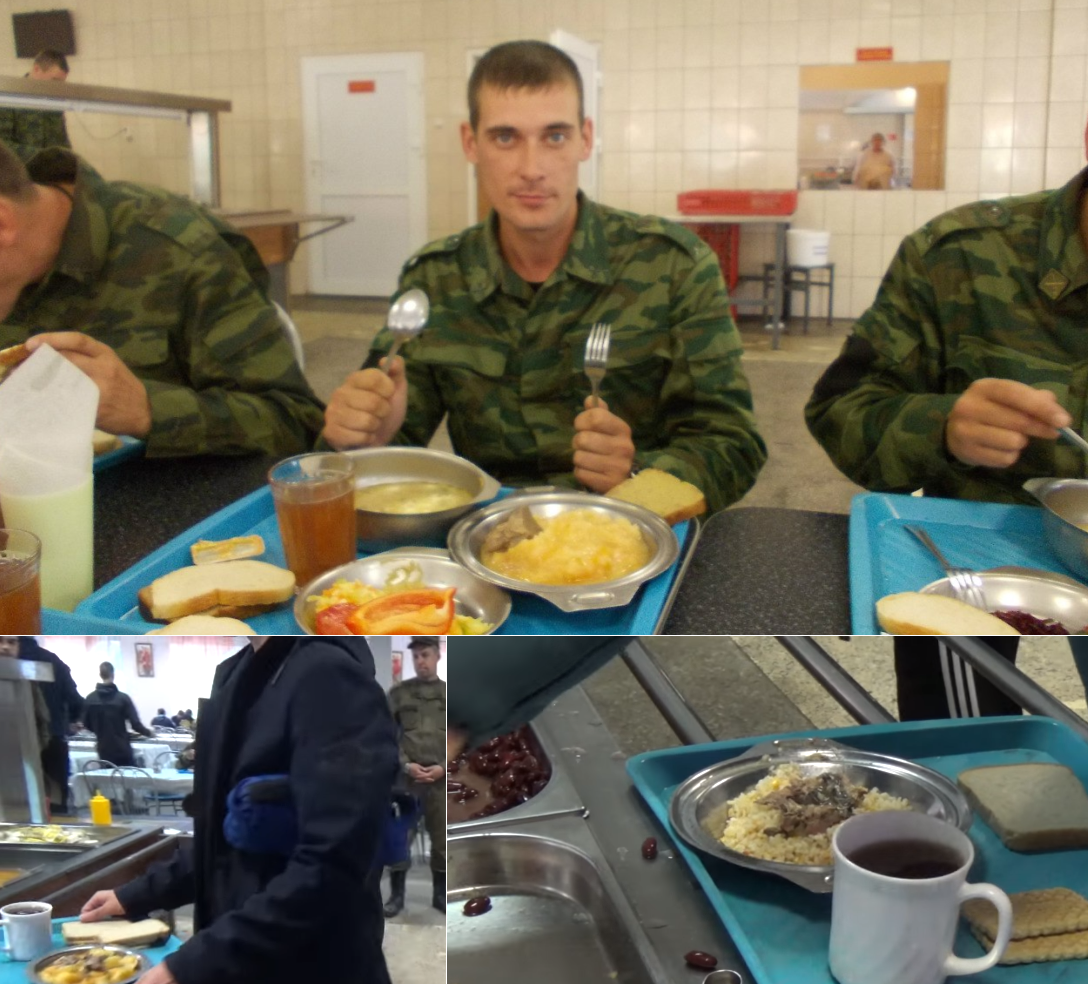 If Grinchenko was trained at MMAA as a member of the group, it means that a Russian military academy conducts special training for foreigners in a military unit located in Russian territory and subordinated to the Ministry of Defense of the Russian Federation. Is this legal at all?

Naturally, the Ministry of Defense of Ukraine and the government of Ukraine in general did not sign any such agreements with the Russian Defense Ministry. Then on what basis does Mikhailovsky Military Artillery Academy train Ukrainian citizens? Is Lieutenant-General Bakaneyev the Academy commander, directly violating the laws of the Russian Federation, bypassing Russian Defense Minister Shoigu?

Besides that Resolution of the Government of the Russian Federation, there’s something else. In Russia, there is an order of the Ministry of Defense, which regulates the training of foreigners in Russian military units. It is called “On the training and instruction of military and military-technical personnel of foreign countries in military units and military educational organizations of higher education of the Ministry of Defense of the Russian Federation”. However, there is one detail. This order was issued on December 10, 2000. It was changed in 2001 and 2009 and then expired at the end of August 2016.

Particularly noteworthy is paragraph 22, which states that cost-free preferential military training of foreign citizens is performed based on the decisions of the President of the Russian Federation, that is, personally Putin.

The old order is no longer valid, and the new one is either in effect or not, but foreigners continue to be trained. However, lately Moscow has put the cover of secrecy over literally everything, so it’s not really surprising that even the decisions of the top leadership of the Russian Federation exist in the hybrid mode of “they-are-not-there”.

It should be noted that the connection of the Mikhailovsky Academy with the occupation administration of Donbas extends much deeper than the training of militants in the Russian training center. MMAA cadets frequently visit the Donbas “for applied practice.”

So, for example, the well-known Ukrainian volunteer Roman Donik back in May 2015 reported that MMAA graduates came to the Donbas to practice shooting: 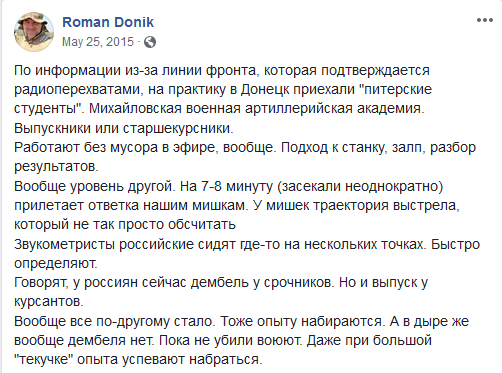 Similar statements were also made in April 2016 by the press service of the Ministry of Defense of Ukraine: “In April 27 of this year, a group of students (about 50 officers) of Mikhailovsky Military Artillery Academy (St. Petersburg) of the Russian Armed Forces arrived at the former Donetsk military lyceum (Kuprina Street, 1).”

In 2017, MMAA students continued the tradition of live target shooting. On July 26, 2017, the coordinator of the group Information Resistance Dmitry Tymchuk reported on his Facebook page: “From July 17, the monthly encampment of the artillery units of “1st DPR Army Corps” continues, with the participation of groups of students from Mikhailovsky Military Artillery Academy (St. Petersburg, Russia). At least 30 people were observed. Based on the already established practice, in addition to participation in the encampments, students of the Russian military academy take part in “practical exercises” – organizing and carrying out artillery strikes against the positions of Ukrainian troops and settlements in the territory under Ukrainian control.”

MMAA also conducts special research on the use of a new UAV-based reconnaissance and fire complex in the Donbas. We already discussed this in detail in one of our articles in 2016.

As we see, the exchange of experience continues. It’s strange that with so much direct evidence, the Kremlin and the Russian military command continue to state that regular Russian units have nothing to do with the fighting in the Donbas. However, contrary to the myths of Russian propaganda, the war between Russia and Ukraine has been going on for more than four years. All these years Russia continues to send its regular troops to the Donbas and trains mercenary detachments, hands over weapons and money for the maintenance of the occupation army. In the time span equal to two thirds of the Second World War  the entire world community still has not found a way to force Moscow to return its troops home and leave Ukraine alone.

Post Scriptum: At the time of the publication, Andrei Grinchenko managed to delete both of his accounts in the VK network, leaving only the OK account. But all this is in vain, because Internet traces, like manuscripts, do not burn.

The investigation was prepared by InformNapalm volunteers Mikhail Kuznetsov and Christina Dobrovolska. Translated by Andrii Gryganskyi, edited by Max Alginin. With full or partial use of information, a direct link to this publication is required. (Creative Commons — Attribution 4.0 International — CC BY 4.0)