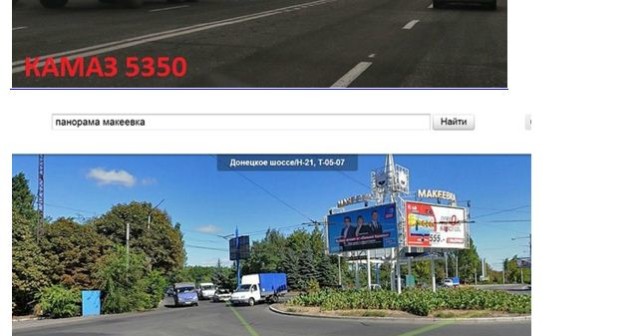 The subject of Russian armor identified in Ukraine has been discussed many times, over and over, ad nauseam. But for some reason not much has been said about military trucks, even though it is mostly Russian new generation KamAZ in different modifications that can be seen in the photos from Donbas. Most of them belong to the Mustang family, including the armored KamAZ-5350 Mustang with the extra protection package and the armored troop module. Their series production started just a few years ago, and the primary buyer is the Russian Ministry of Defense.

We present several photographs and screenshots from videos made during 2014-2015, which show the presence of Russian KamAZ trucks in Ukraine. This proves one more time the participation of Russian army in the undeclared war against Ukraine.

We thank our friend Dmitry for the provided documents. 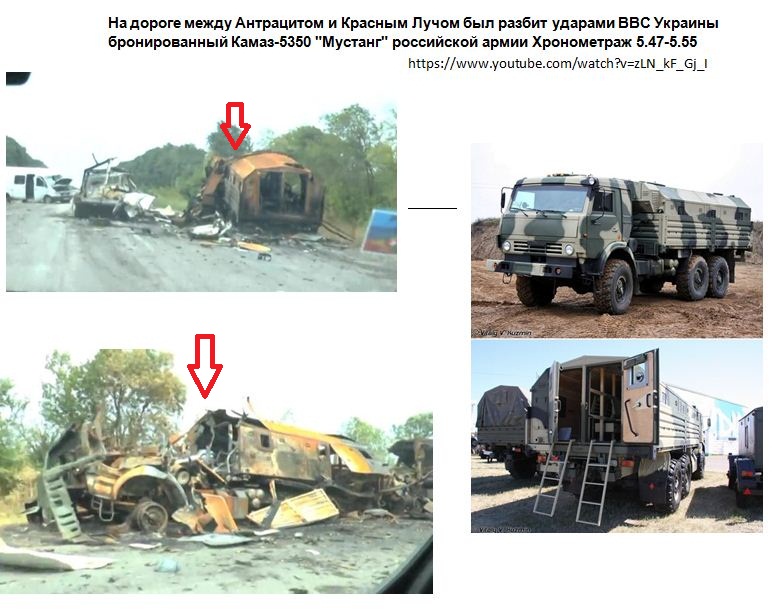 Screenshot: Shot KamAZ on the Putilovskyi bridge near Donetsk airport, 27.05.2014 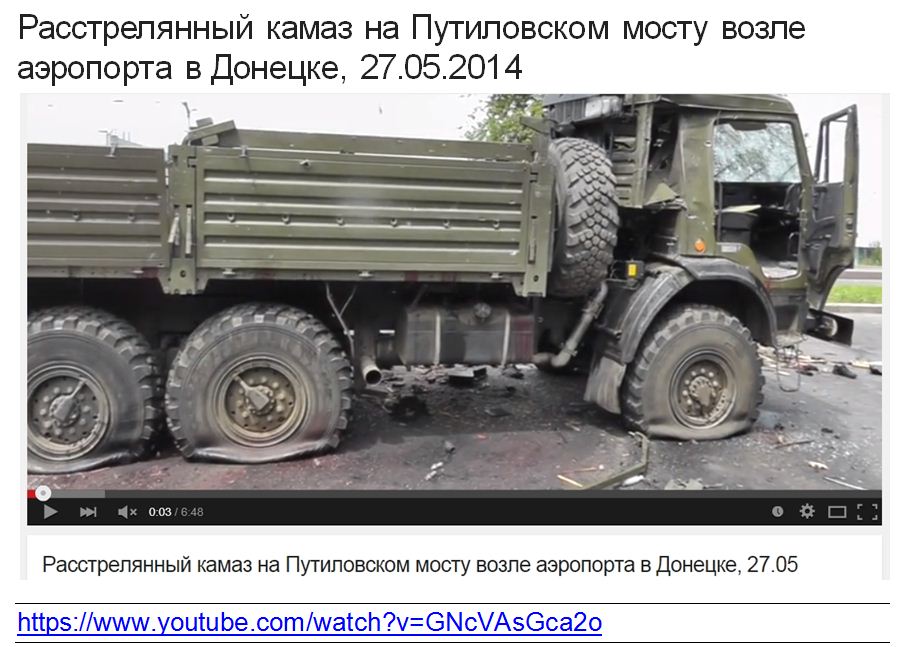 2B26 Grad MLRS is visible in the background; it is mounted on the KamAZ-5350 6*6 chassis and is in service only in Russia. 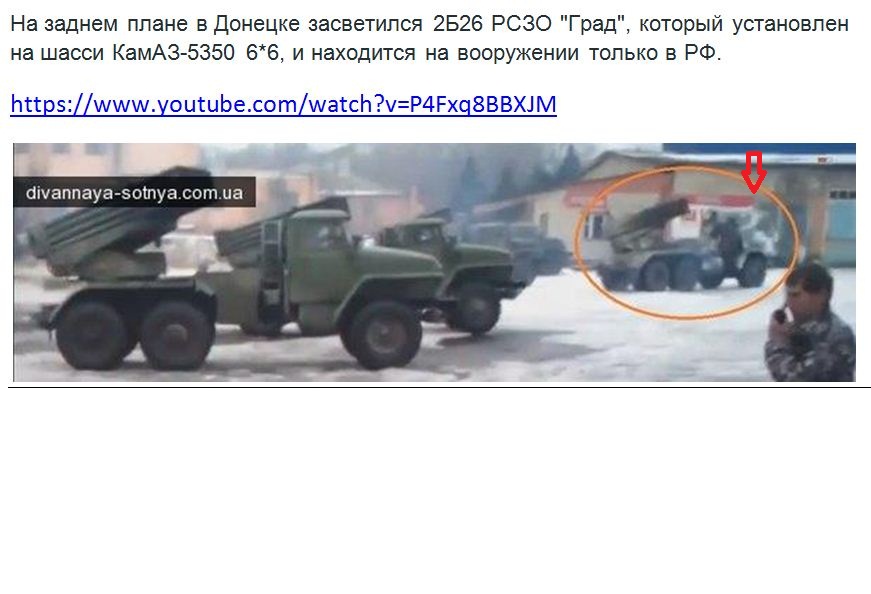 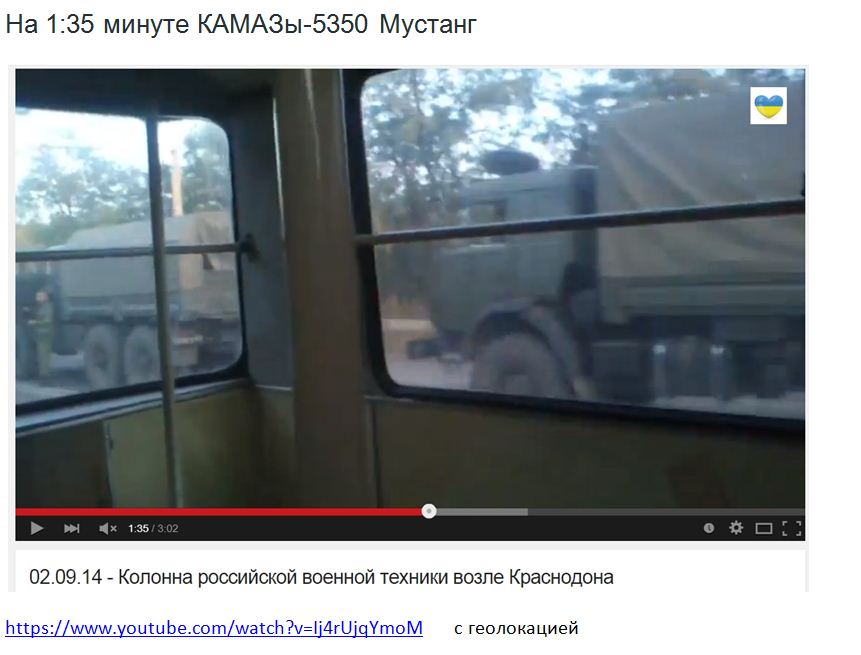 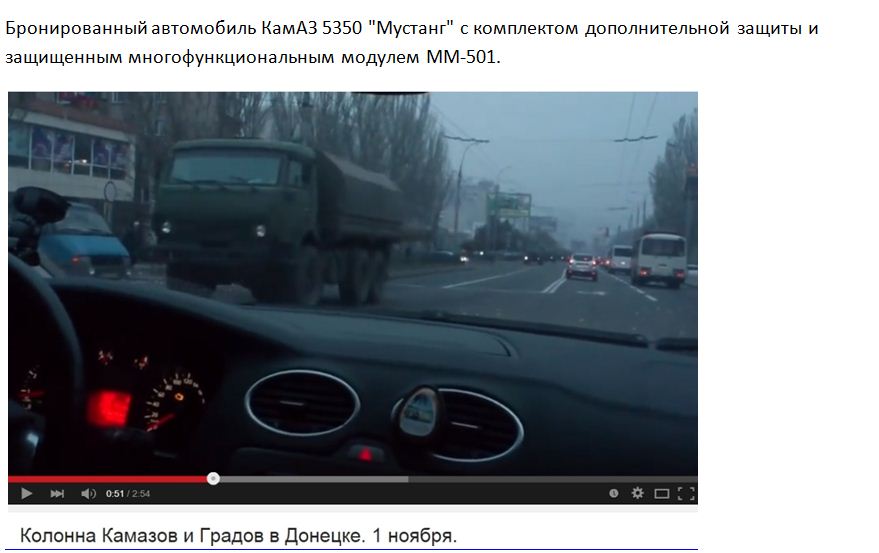 Convoy of KamAZ trucks and Grads in Donetsk, November 1. 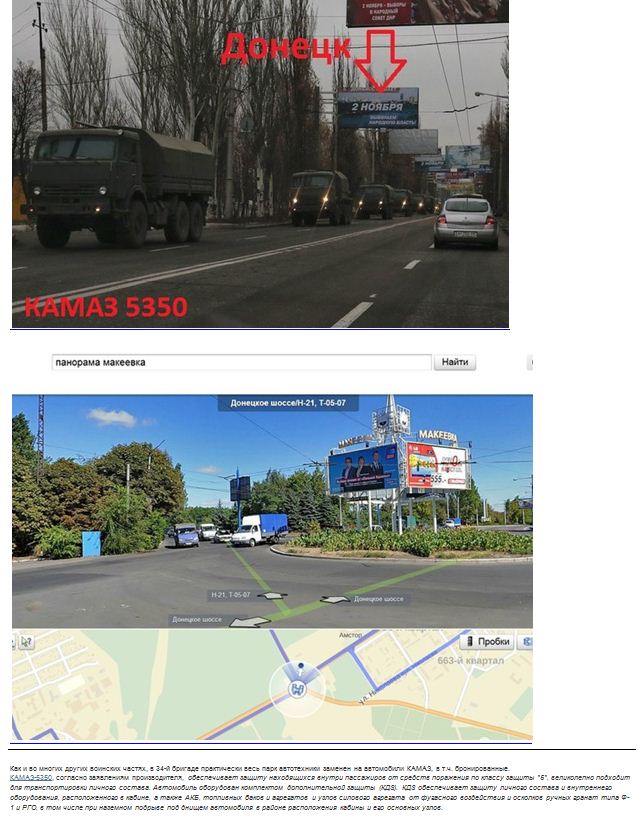 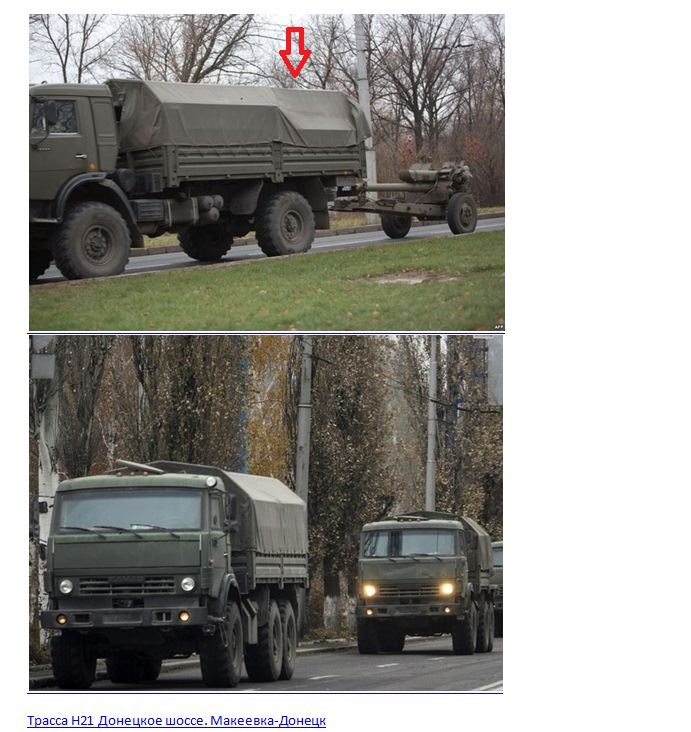 Video screenshot: 25.05.2014 The Vostok Batallion arrives in Donetsk as a convoy of five KamAZ trucks and BTRs 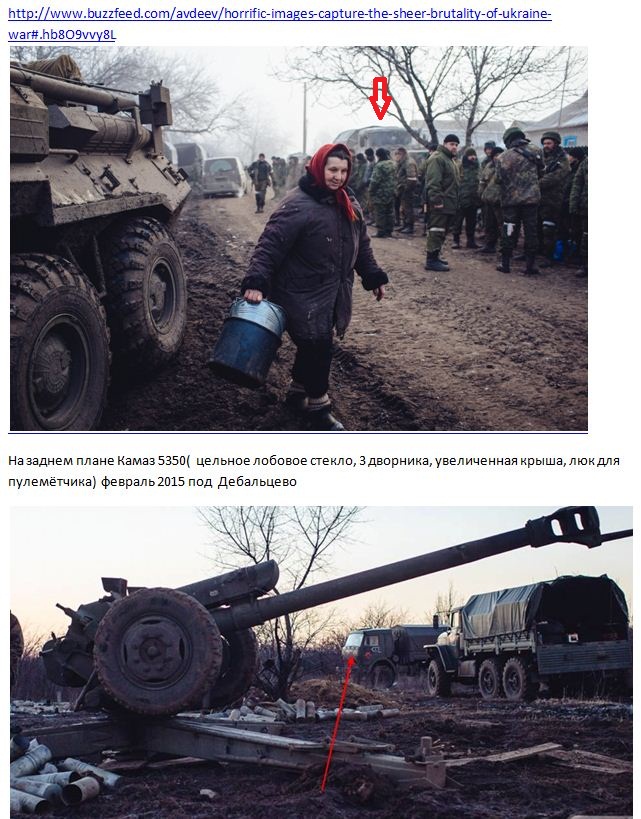 Translation of the news report:

According to the press service of Ukrainian Ministry of Defense, terrorists made an attempt to attack a military unit in the city of Artemivsk using KamAZ trucks. When trying to defend against the attack, Ukrainian servicemen found that regular 5.45 ammunition was unable to stop the KamAZ. The truck was stopped only with fire from 7.62 caliber weapons, after direct hits to the engine and the wheels. The attack was stopped, and the truck was captured.

During the inspection, a 12.7 mm machine gun “Kord” and three automatic grenade launchers AGS-17 with ammunition were found in the cargo bed. Additionally, the soldiers noticed that this seemingly normal looking KamAZ (similar to model 43118) had armored windshield and sides. The Ukrainian Army is not equipped with such vehicles. However, the neighboring Russia has them, where they are known as KamAZ-5350 Mustang.

It was hard for Ukrainian soldiers to stop this Mustang. But this is nothing compared to the new generation of Russian army trucks, which are manufactured in large numbers at KamAZ and UralAZ plants. In the future, this “arms race” will only accelerate. The Russian side rapidly corrects the methods and the equipment used by the terrorists. We will soon see, how the Ukrainian army will respond. AUTO-Consulting notes again that Ukrainian plants have some new developments on armored vehicles as well as army equipment with anti-mine protection (MRAP). When such new vehicles will be delivered to the army, remains unknown. 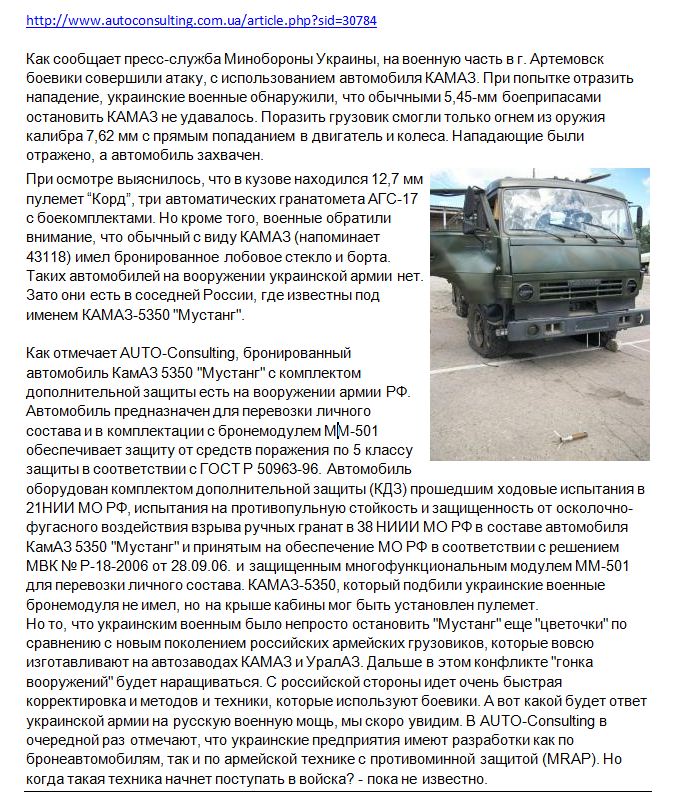 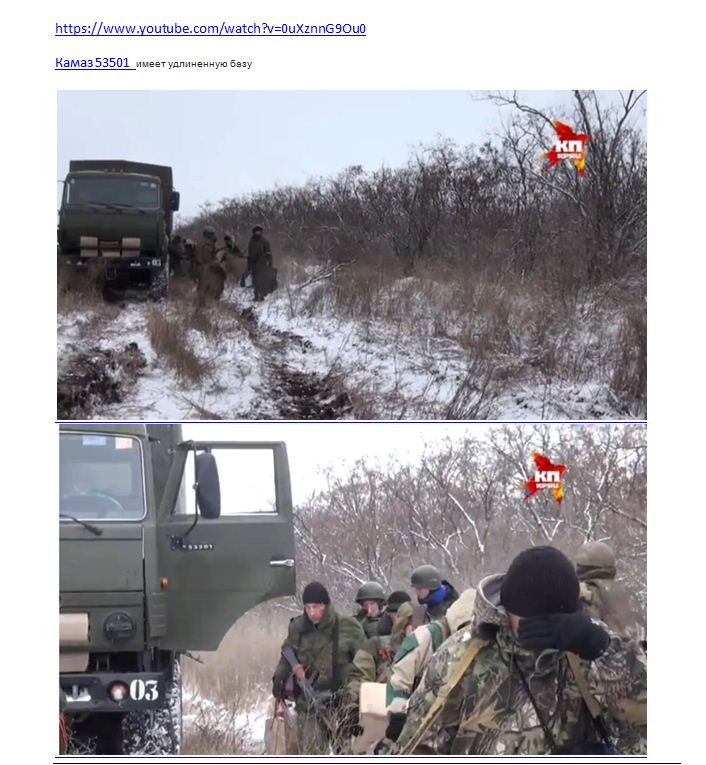 It would be nice, if the relevant Ukrainian state organizations could take the responsibility for collecting, analyzing and distributing this kind of information, showing Russian participation in the conflict in Donbas (obviously, with better clarity, credibility, and expert analysis). However, if the officials, both in uniform and civil clothes, are not competent in these issues, they should step aside and let the more capable people take their places.

More links on this subject: