On July 8, 2016, social networks shared some information on a helicopter shot down near Syria’s  Palmyra. Arab media picked up this information specifying that the helicopter was Russian. In the evening of the same day, a representative of the Russian Defense Ministry at the Hmeymim airbase denied the reports of the media: “All Russian combat helicopters in service in the Syrian Arab Republic safely returned to airfields after accomplishing their planned missions. There were no loss of Russian aircrafts“.

The next day, IS terrorist fighters posted a video on YouTube showing a combat helicopter strikes  its ground targets with unguided rocket projectiles. After the second barrage one can clearly see that the helicopter was hit in the tail rotor and began to fall while spinning. 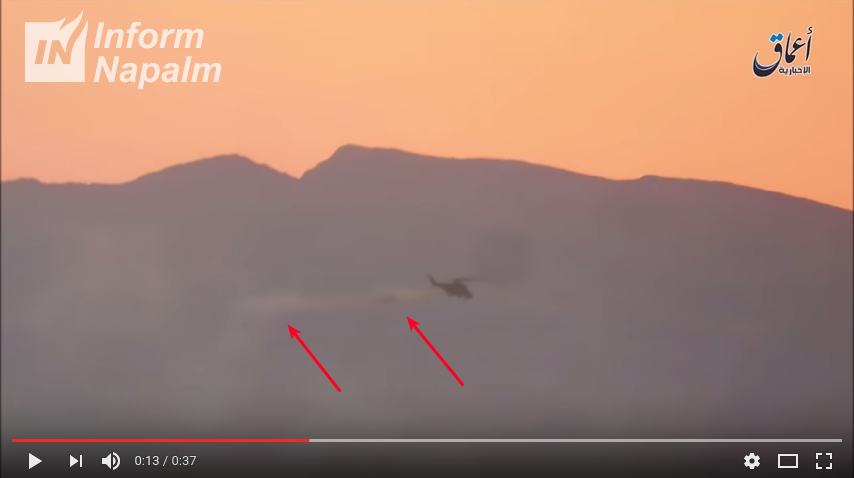 In other words, according to the Russian Defense Ministry, the crew was “testing” the Syrian Air Force helicopter in a combat zone. Having heard on the radio a call for help, the crew made an independent decision to open fire using accidentally available ammunition. This is another attempt by the Russian propaganda to portray a Russian helicopter as a Syrian one. However, in the shots of the falling helicopter one can see clearly the landing gear and short wings with two points of suspension arms, indicating a modern modification of the Mi-35M which is in service in the Russian Armed Forces only.

Let us remind you that in early 2016 Syrian media reported the arrival of Russian Mi-35M  helicopters with the registration numbers RF-13029 and RF-13021 to the Hmeymim airbase (link 1. link 2). The killed pilots Ryafagat Khabibulin and Yevgeny Dolgin served in the 55th Separate Army Aviation Regiment (Korenovsk Air Base) which received new Mi-35M in 2012.

Realizing the absurdity of the quickly cooked up lie about the downed helicopter, the Russian propaganda machine sent to Palmyra Marat Musin, the director of the so-called ANNA-NEWS agency (a Russian propaganda resource financed and supervised by the FSB). The result of Musin’s “work” is a video of the helicopter crash site titled “Palmyra. Report from the place of death of Colonel Khabibulin and Lieutenant Dolgin,” Based on the video analysis the exact place of the helicopter crash was determined, as well as the landmarks – the granary and the single-story building. 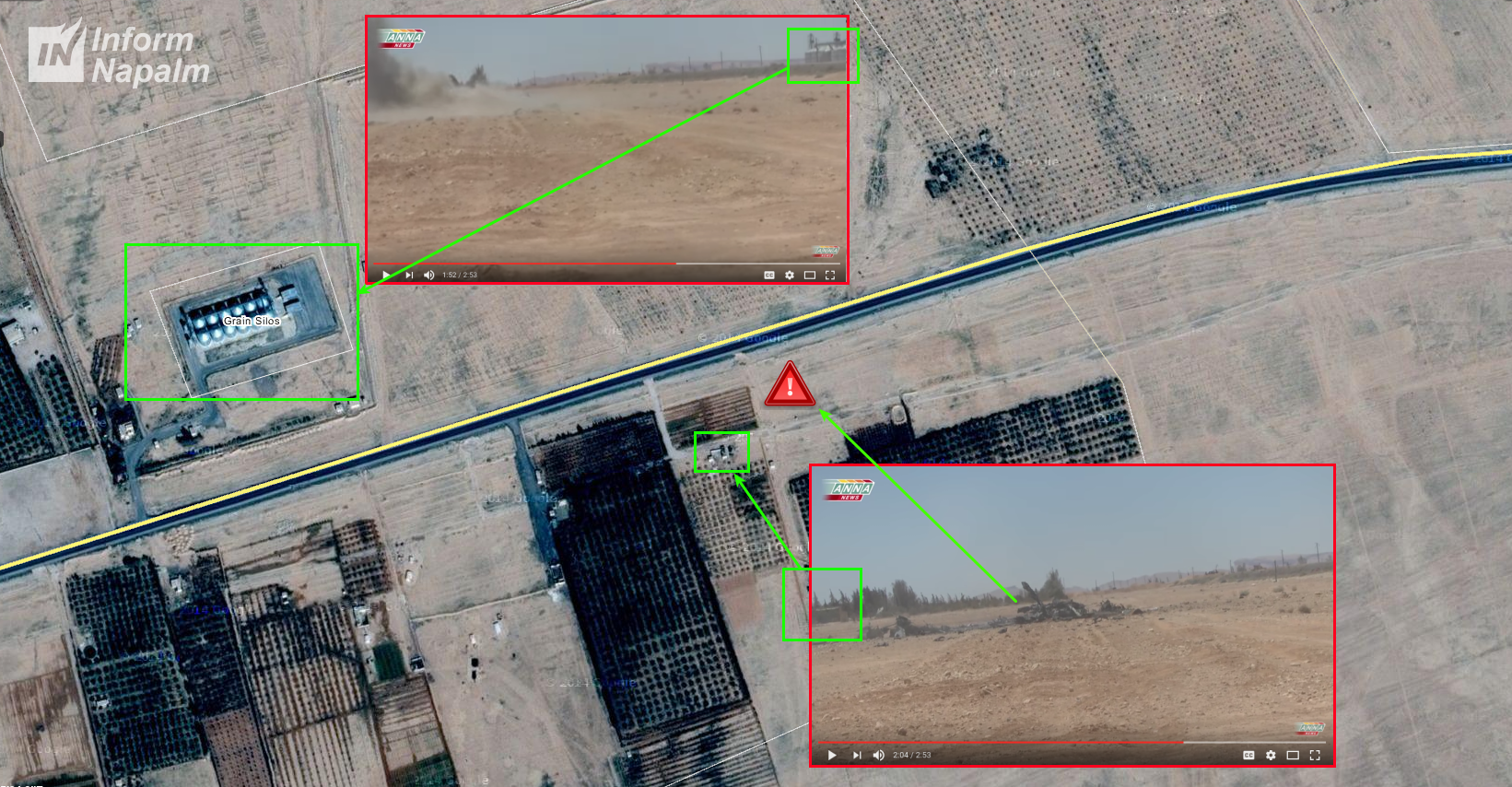 The video report shows a sudden explosion of the already burned up Mi-35M.
What does this blast mean? What for? There was no shelling to observe, the operator is calmly standing near the explosion site. Thus, it is a deliberate blasting that was arranged by the military personnel which arrived at the site together with Musin. 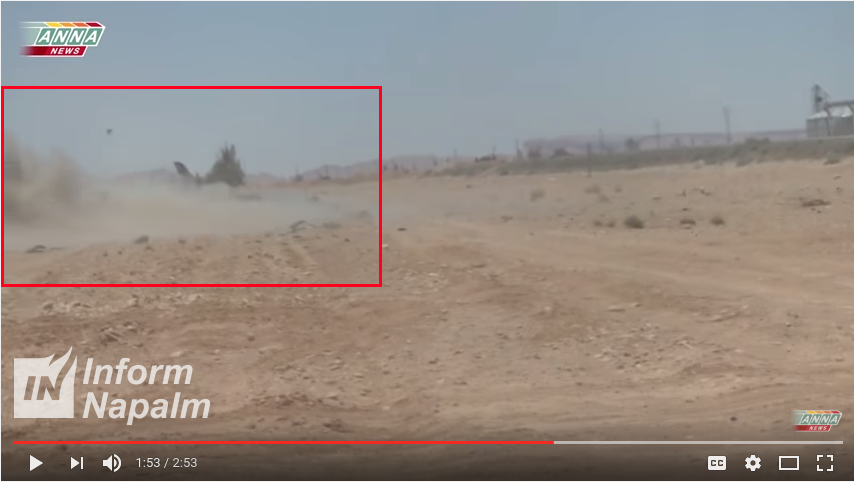 So, what was the purpose of the explosion?  After a careful review, we can see that the glorious FSB propagandists changed the chronology of the captured materials during the editing. On the video, we see the explosion first, then – Musin holding a melted piece of metal in his hand. However, the order of the events was just the opposite. This fact gave us the opportunity to understand what happened. In the screenshot below, we see the unbroken tail boom of the helicopter (timing 2:09). 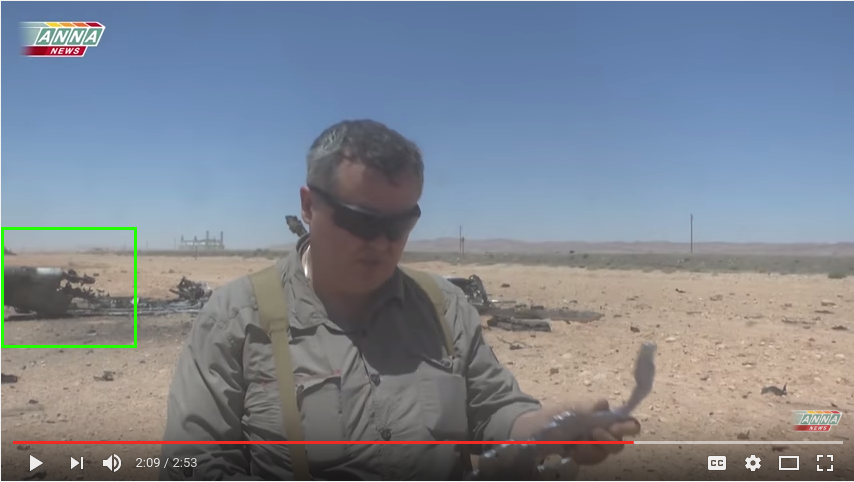 Then look at this screenshot (timing 2:03) – tail boom is almost destroyed by the explosion. 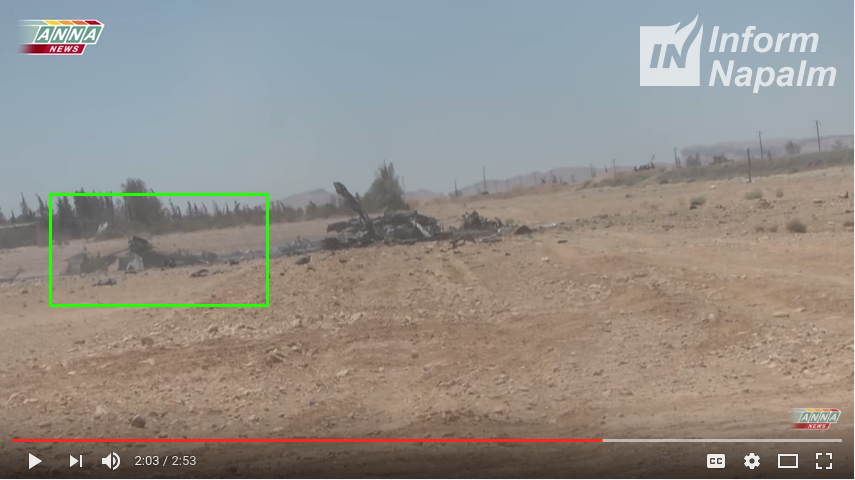 We can assume that the explosion was made to destroy the remaining labels and other identification markings that would make the identification of the specific aircraft possible. Another version is to hide what type of weapons and ammunition it was hit with. A Russian Defense Ministry official said that the helicopter was shot down by an American TOW-71 anti-tank missile, although the TOW-71 is wire controlled and it is useless against the target moving above 60 km/h (the helicopter’s speed at the time of the strike was above 150 km/h). So, why blast the tail boom if it could have been examined to determine the type of ammunition that destroyed the helicopter?

Volunteers of the international community InformNapalm thank Mussin and ANNA-NEWS agency for another faux pas that has uncovered once again a fraud of the Russian propaganda machine and discredits its FSB curators. At 0:52 of the video we see the Mi-35M flying over the Tadmor airbase in Palmyra. 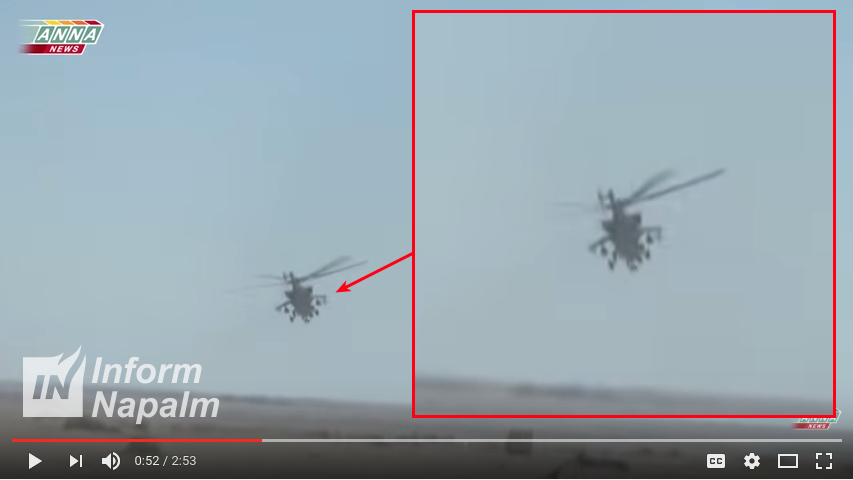 Musin made a similar mistake in September 2014. In his reportage for ANNA-NEWS he filmed a T-72BA tank of the Russian 21st Separate Motorized Rifle Brigade destroyed by Ukrainian army near Starobeshevo in Donetsk Oblast. Detailes read here.

One Response to “Downed Mi-35M in Syria: Lie of Russian Propaganda”