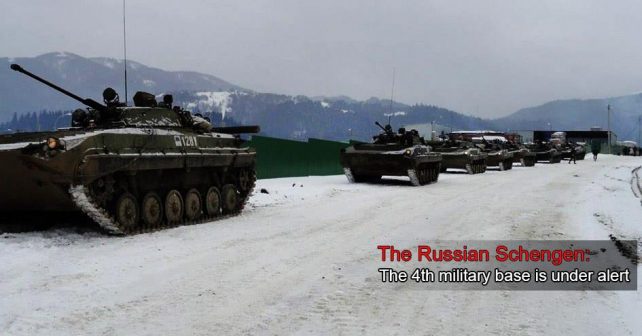 The 4th Military Base of the Russian occupation forces deployed a hundred kilometers from Tbilisi, was put on combat alert on the back of the reports about granting Georgians a visa-free entry into the Schengen area.

On February 2, 2017, at the plenary session MEPs voted infavor of granting Georgian citizens a visa-free entry for visiting the countries of the Schengen area. The decision will take effect after the approval by the European Council and resolution of some technical issues.

The Kremlin could not help, but react to the news in its usual manner i.e. more saber rattling. After the decision of the European Parliament, on February 3, the 4th Russian Military Base was put on high combat in a “snap exercise”. The base is deployed in the occupied Tskhinvali region (so-called South Ossetia) of Georgia, which is located a hundred kilometers from Tbilisi, the capital city. More than 500 servicemen and 100 pieces of military equipment were involved in the “snap exercise” – infantrymen, main battle tanks and artillery marched to Dzartsemi training range, where they trained in the field solving battle tasks from the move. Colonel-General Aleksandr Dvornikov, the commander of the Southern Military District of Russia, personally watched the whole process.

There is little doubt that the announcement of operational alert at the 4th Russian Military Base was triggered by the information on visa liberalization for Georgia. Russian media actively covered the news. The report on the official youtube channel of Vesti.ru dedicated to the combat alert exercise in Tskhinvali had a noteworthy headline: “Getting ready for war?! Snap exercise: the 4th Military Base put on alert. It is a very clear signal aimed not only at Georgia, but also at Europe. 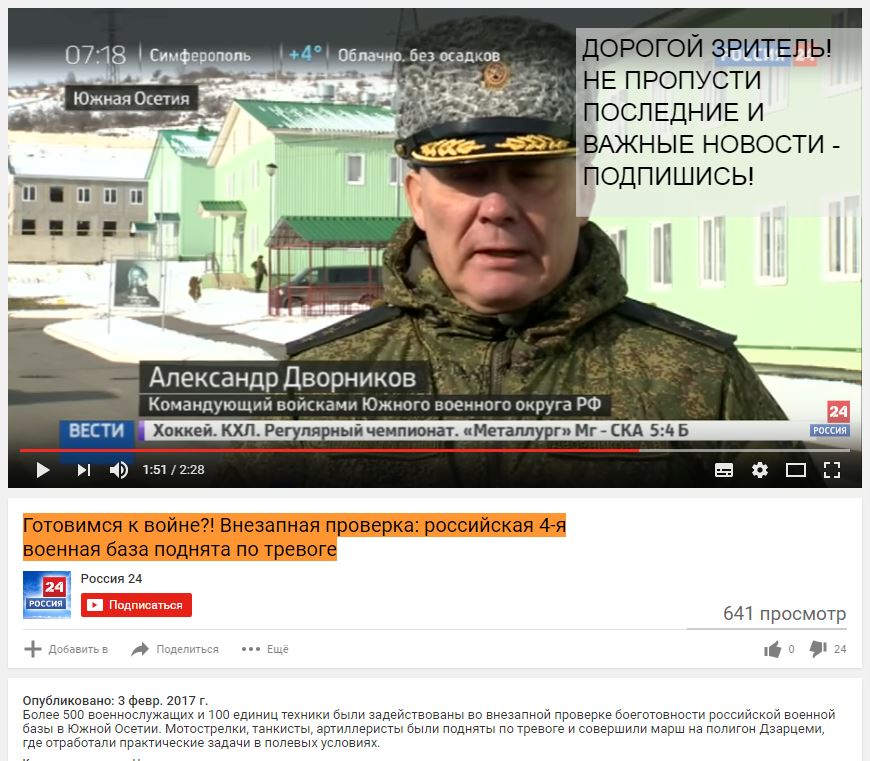 It is worth reminding that the 4th Russian Military Base is a unit, not only occupying the Tskhinvali region of Georgia, but also actively engaged by the Kremlin in an undeclared war against Ukraine. The identification of the military equipment of this unit in Donbas, in particular KAMAZ-43269 Vystrel, infantry mobility vehicles (IMV) in late 2014 and early 2015, has become one of the most notorious episodes related to the 4th Military Base, read more: Tshinvalii “shots” in Luhansk. Another episode with the 4th Military Base in the context of the war in Donbas, was described in our publication dated January 24, 2017, read more: Contract soldier from the Tskhinvali military base posted to Cheburashka illegal armed group identified.

The base has: a battalion of 9К37 Buk surface-to-air missile systems (SAM): a 9S470M1 command point, a 9S18M1 Kupol-M1 (NATO reporting name: Tube Arm) target acquisition radar station, a communications platoon and three anti-aircraft missile batteries with two 9A310M1 transporter-erector-launcher-radars and one 9A39 launcher and loader in each, as well as technical support and service subunits.

This publication was prepared by Irakli Komaxidze,  translated  by InformNapalm English

No Responses to “Russian Schengen: 4th Military Base put on alert”