Russian soldiers identified through information from a video 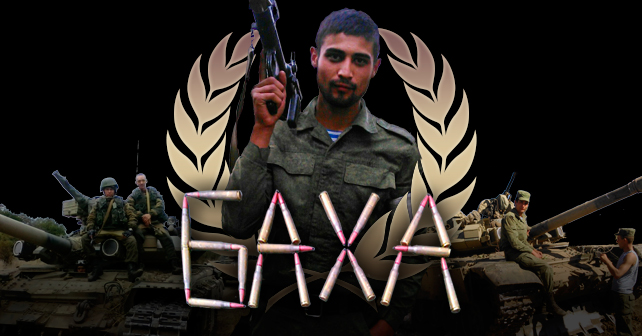 In the following investigation, InformNapalm will demonstrate how a single video yielded a lot of information about the participation of regular Russian soldiers of 104th Air Assault Regiment (AAR) of the Pskov Airborne Division (military unit 32515, village Cherekha, Pskov Oblast). The video was made by a serving Russian military man in Ukrainian Donbas.

We came across an interesting photo in the social network profile of a former serviceman of the 104th AAR named Gherman Shachenkov (born January 15, 1968, resident of Smolensk, archived profile, photos, contacts). It is a group photo with Russian military personnel wearing white armbands. In the initial phase of the war in Donbas, they served as the identification feature for regular Russian servicemen and mercenaries of the illegal armed groups (IAGs) waging the proxy war in Ukraine. In the photo, one of the servicemen also holds a Novorossia shoulder patch in his hands.

Link to the photo. 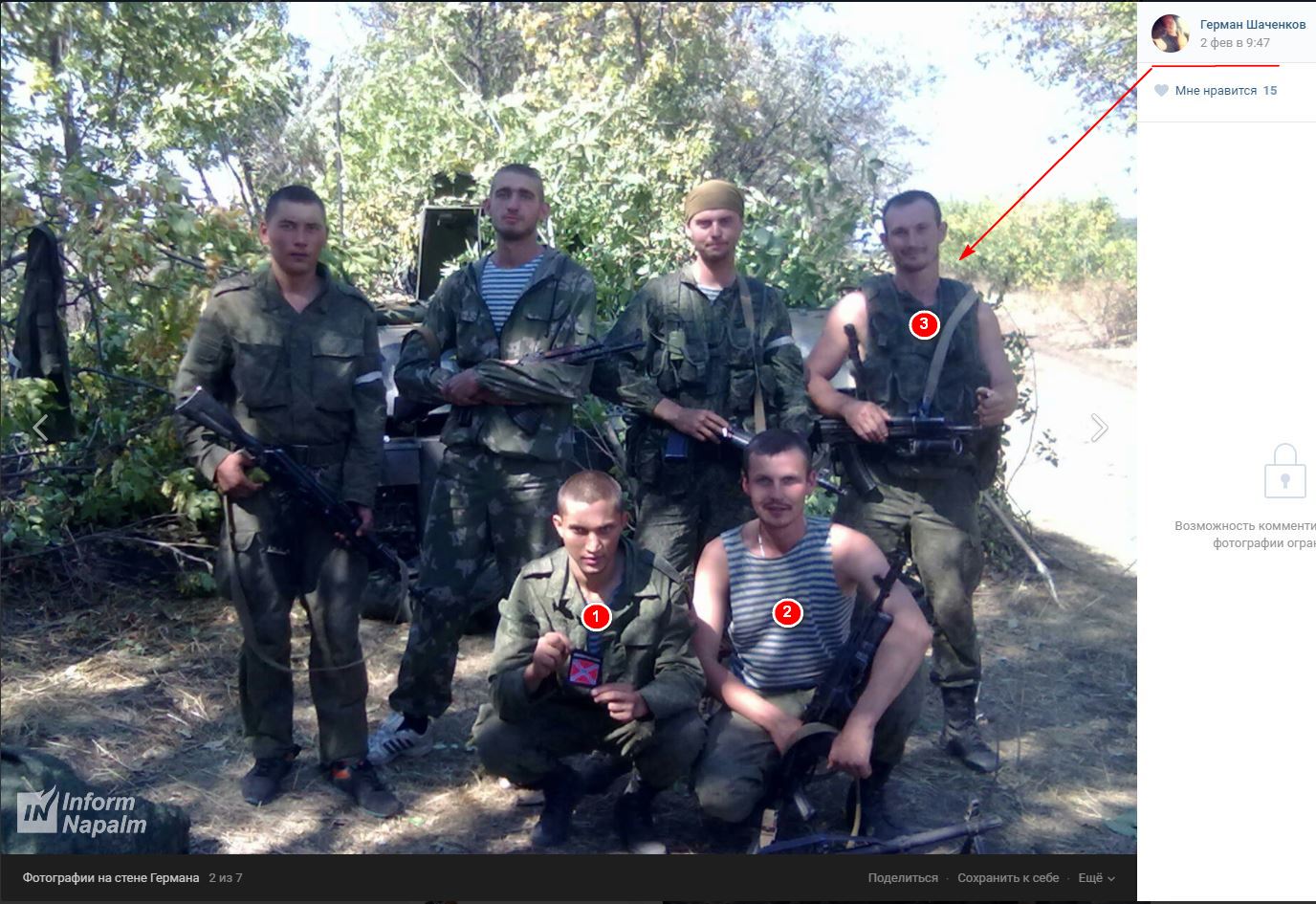 We have also found an identical photo in another profile of Shachenkov in the OK social network.

An analysis of his contacts, friend list, and a photo collage in his OK profile (photographs of the 6th company garrison memorial) corroborated our assumption about his service in the military unit 32515. 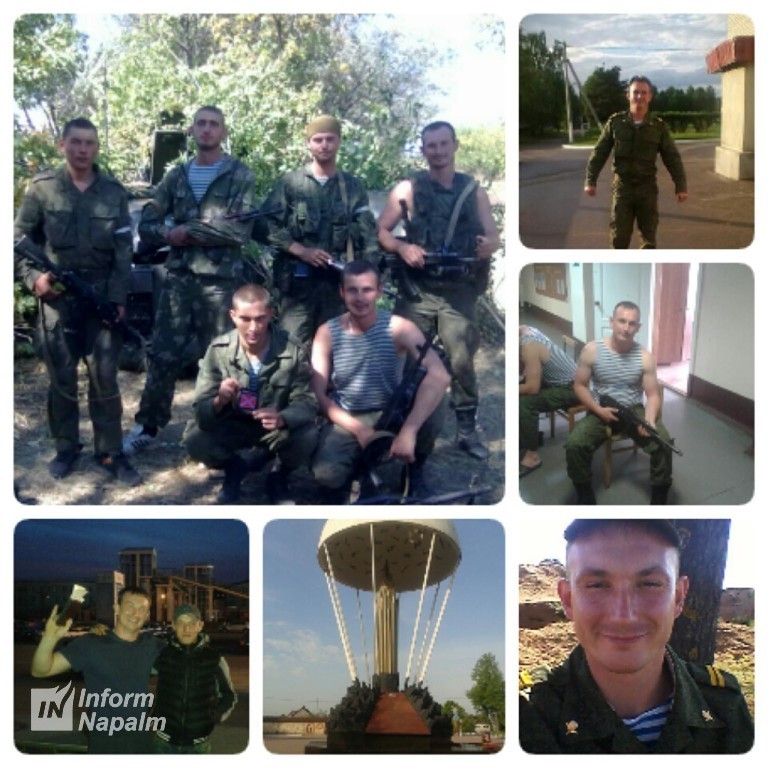 In the above photo with the white armbands, we have identified the following persons:

#1: Ruslan Nikitin, who from time to time deletes his VK profile (https://vk.com/id287304321), but information about him remains stored in the archives. Like Shachenkov, he also served in the 104th AAR. 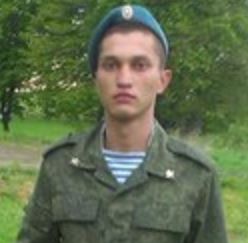 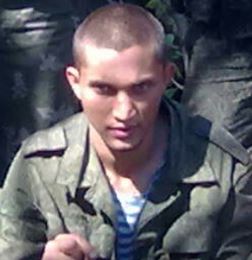 In Nikitin’s photo archives, we found the same photo with the armbands, which was uploaded in December 2015 with a geotag pointing to the area of Luhansk. The photo received some comments from his colleagues:

– Yes, the tour was f#cking great. 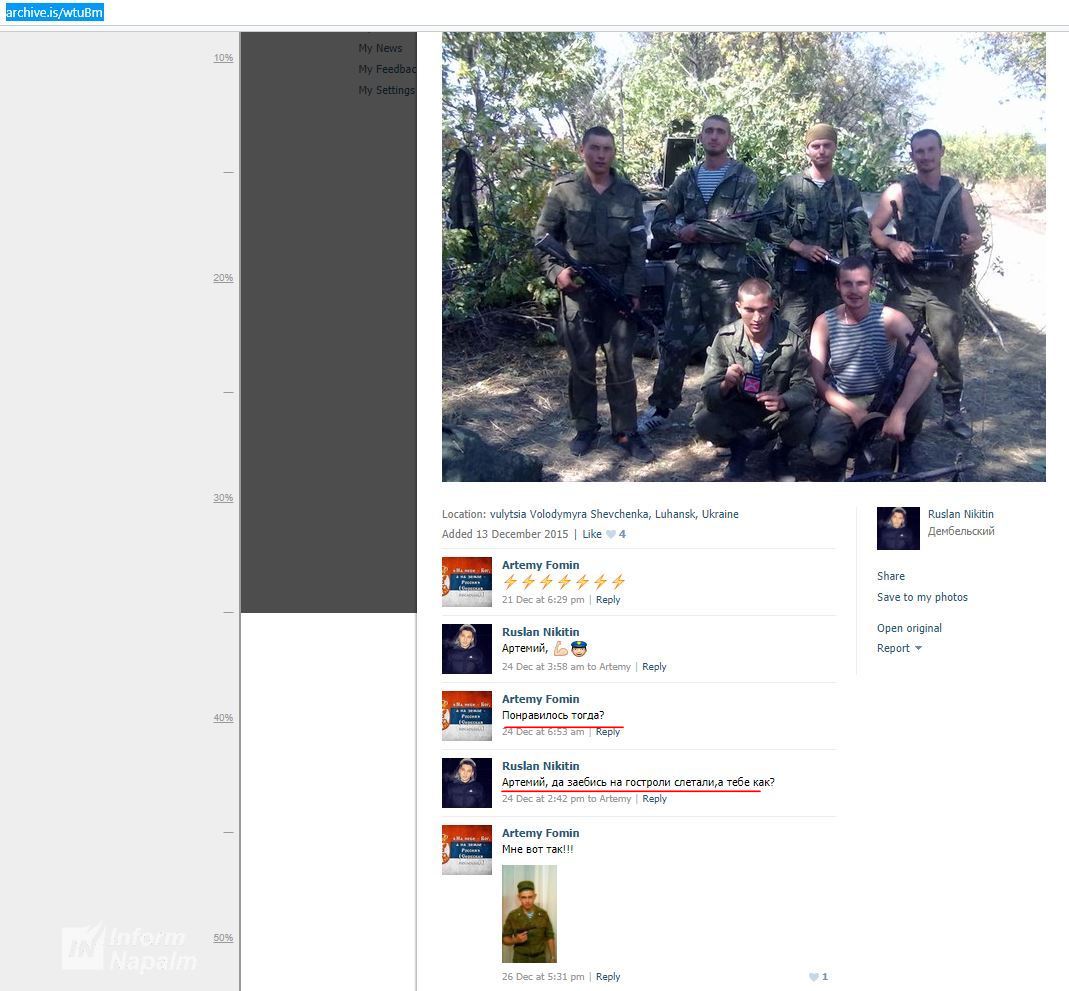 This archived photo of Nikitin allowed us to identify person #2 in this investigation. This is Alexander Avdeyev. The photo was captioned as: “Avdey, me and Vadik”, it was uploaded in July 2015. 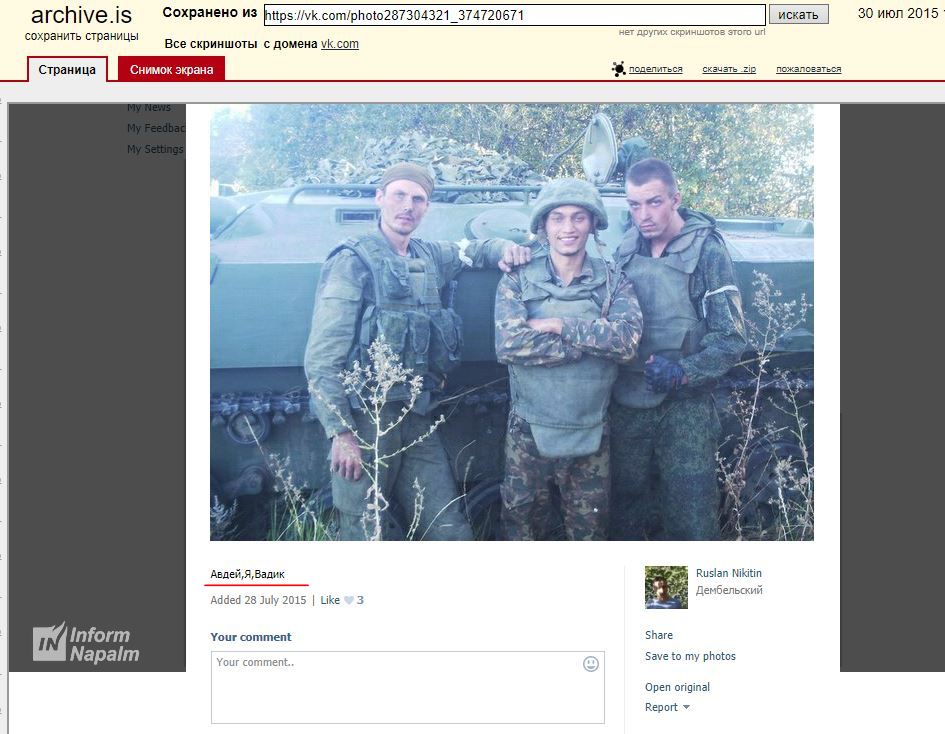 When we analyzed the list of friends in Nikitin’s profile, we found Alexander Avdeyev, alias Avdey, under the surname of “Petrov”: https://vk.com/id12302272 (archived profile, photos, contacts). His name is also visible on the uniform nametape in the photos made by his friends. 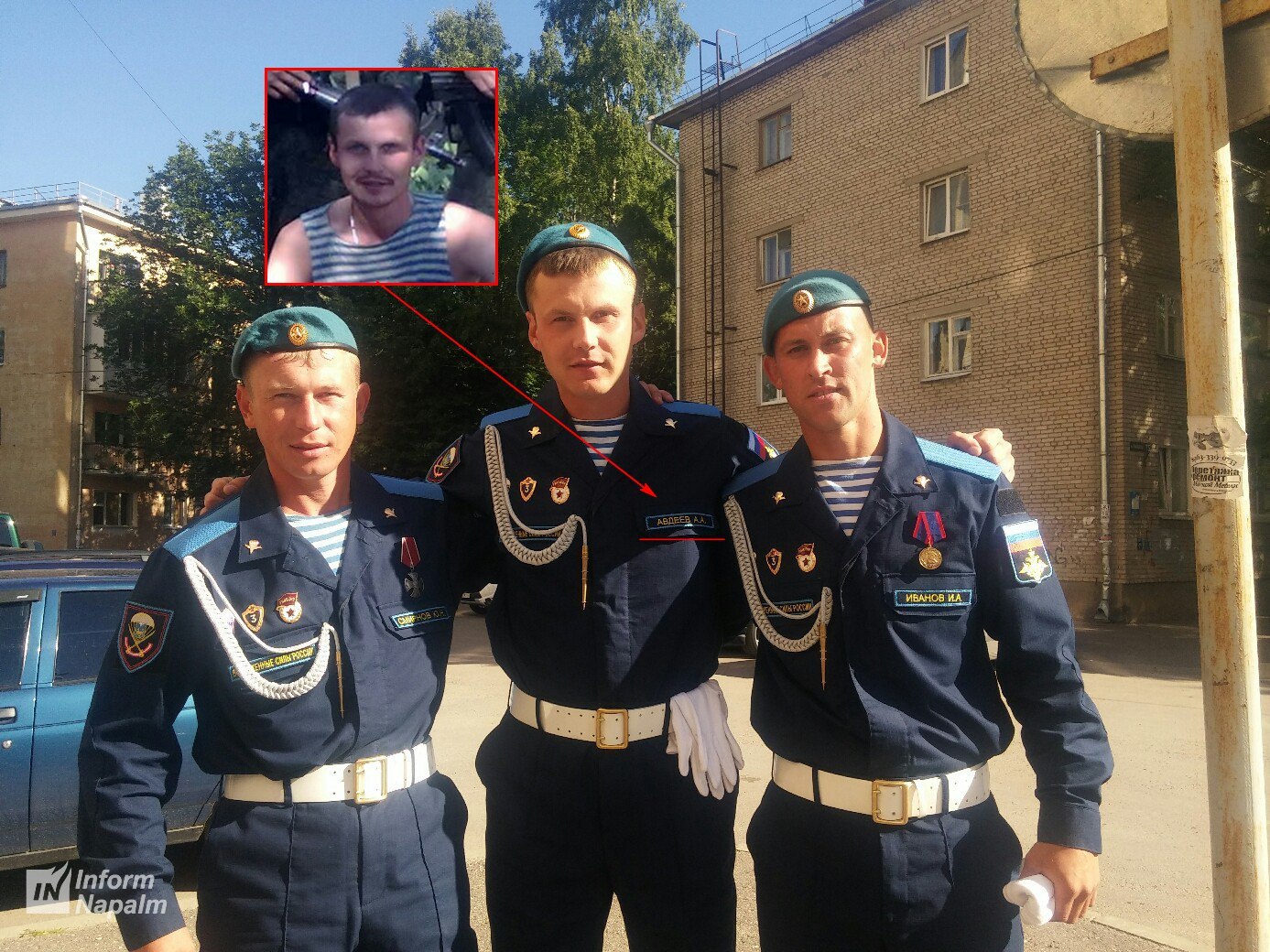 And person #3 of our investigation is the aforementioned Gherman Shachenkov. We have not yet been able to identify the other people in the group photo. 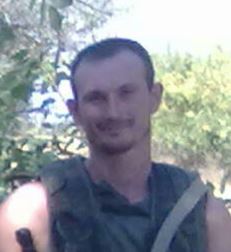 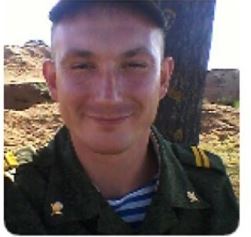 In Shachenkov’s VK profile, we found a YouTube video of a certain Vladimir V, uploaded on September 05, 2014. 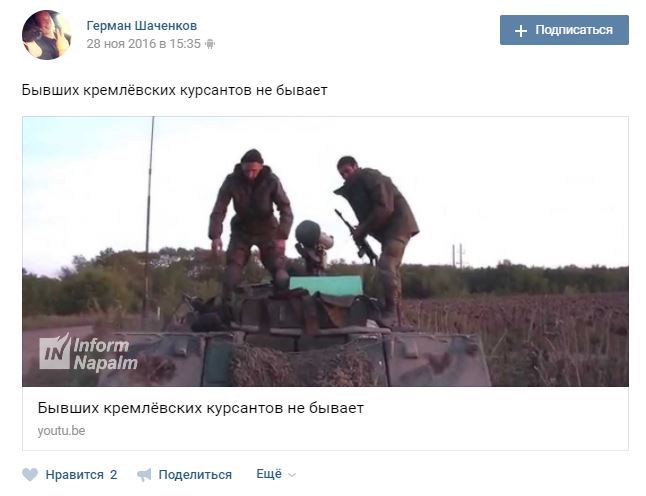 In the video, at 00:34, the above-mentioned soldiers of the 104th AAR were recognized on a BMD infantry fighting vehicle (IFV), namely Nikitin and Avdeyev. 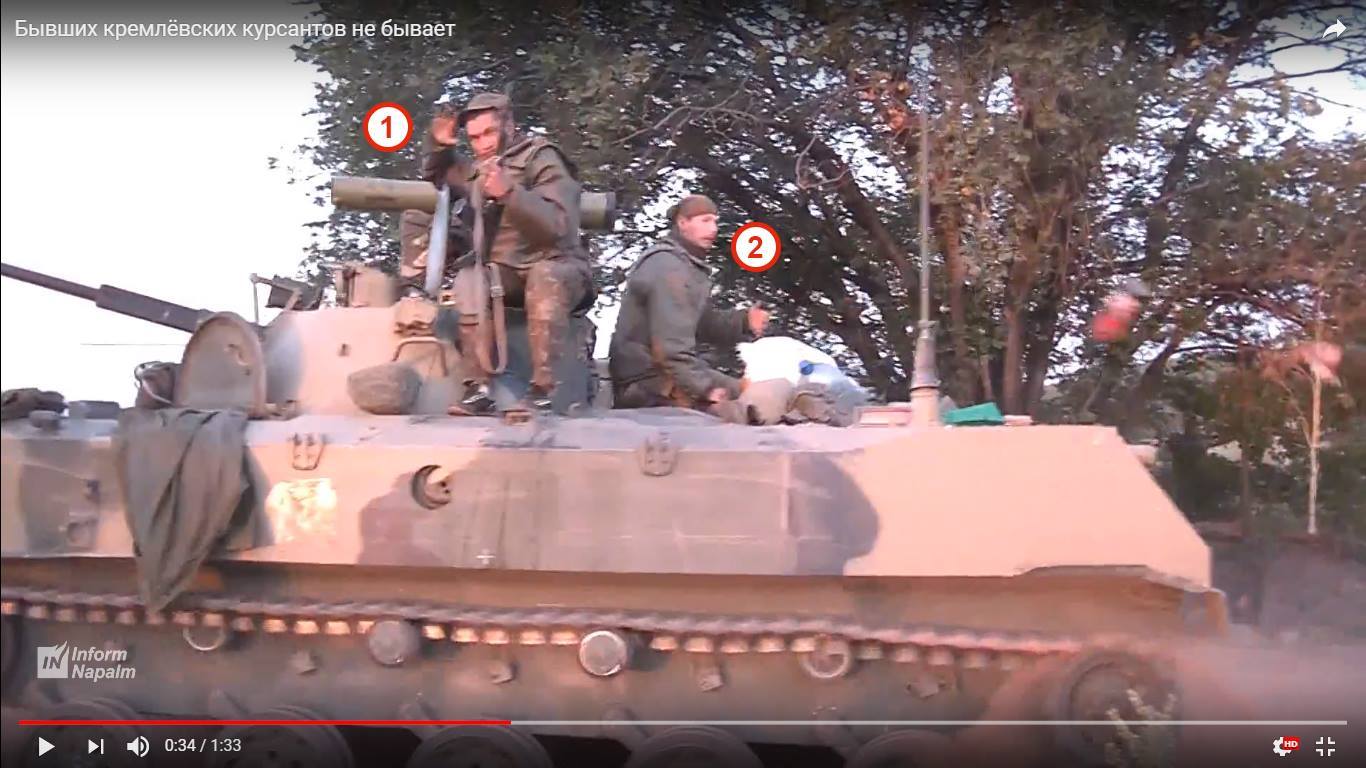 The video is captioned: “A group of volunteers from Russia, including a former Kremlin cadet Kakha, after a short rest at a checkpoint of the peoples’ militia, leaving the battle zone at the crack of dawn”.

We have found that contrary to the claim of the author, those were no “volunteers”, but Russian regular military personnel sitting on the Russian fighting vehicles with the tactical markings and side numbers painted over.

The main character of the video is the military man under the alias Kakha. Among the friends of the Russian servicemen identified above, he was also called Bakha. His real name is Bagir Isaev (archived profile, photos, contacts).

In the same frame of the video, there was identified another serviceman from Pskov – Denis Sakhautdinov, he continues his service with the Russian hybrid army in Donbas. 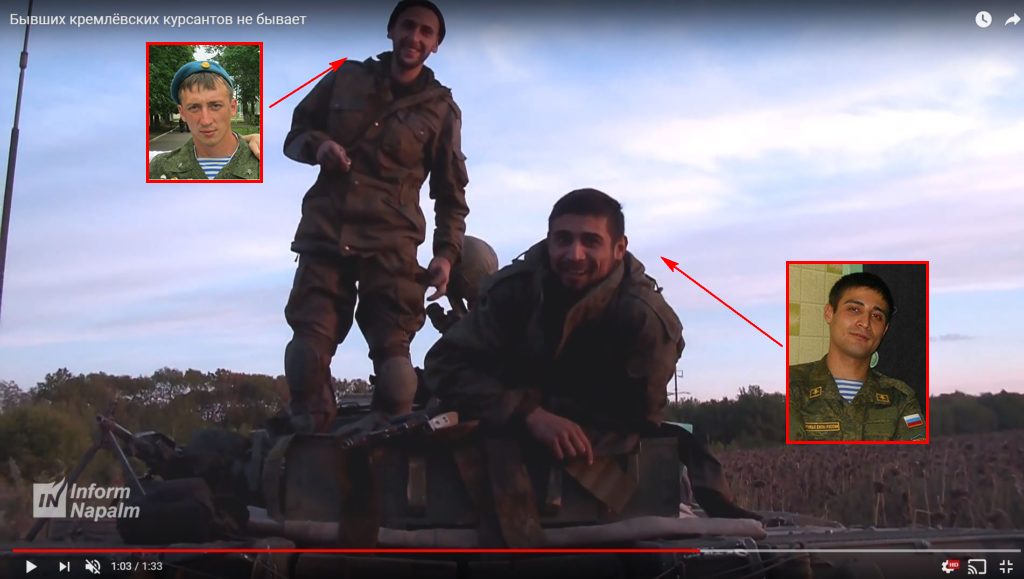 The photo album of Isaev contains a lot of photos both from the borderline areas in Rostov Oblast of Russia, as well as from Ukraine. Here are some of the photos: 1, 2, 3, 4, 5. 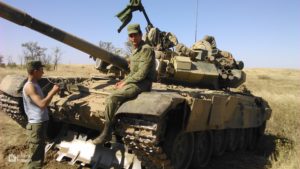 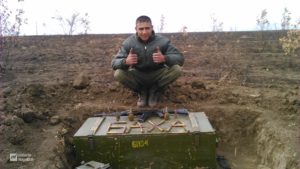 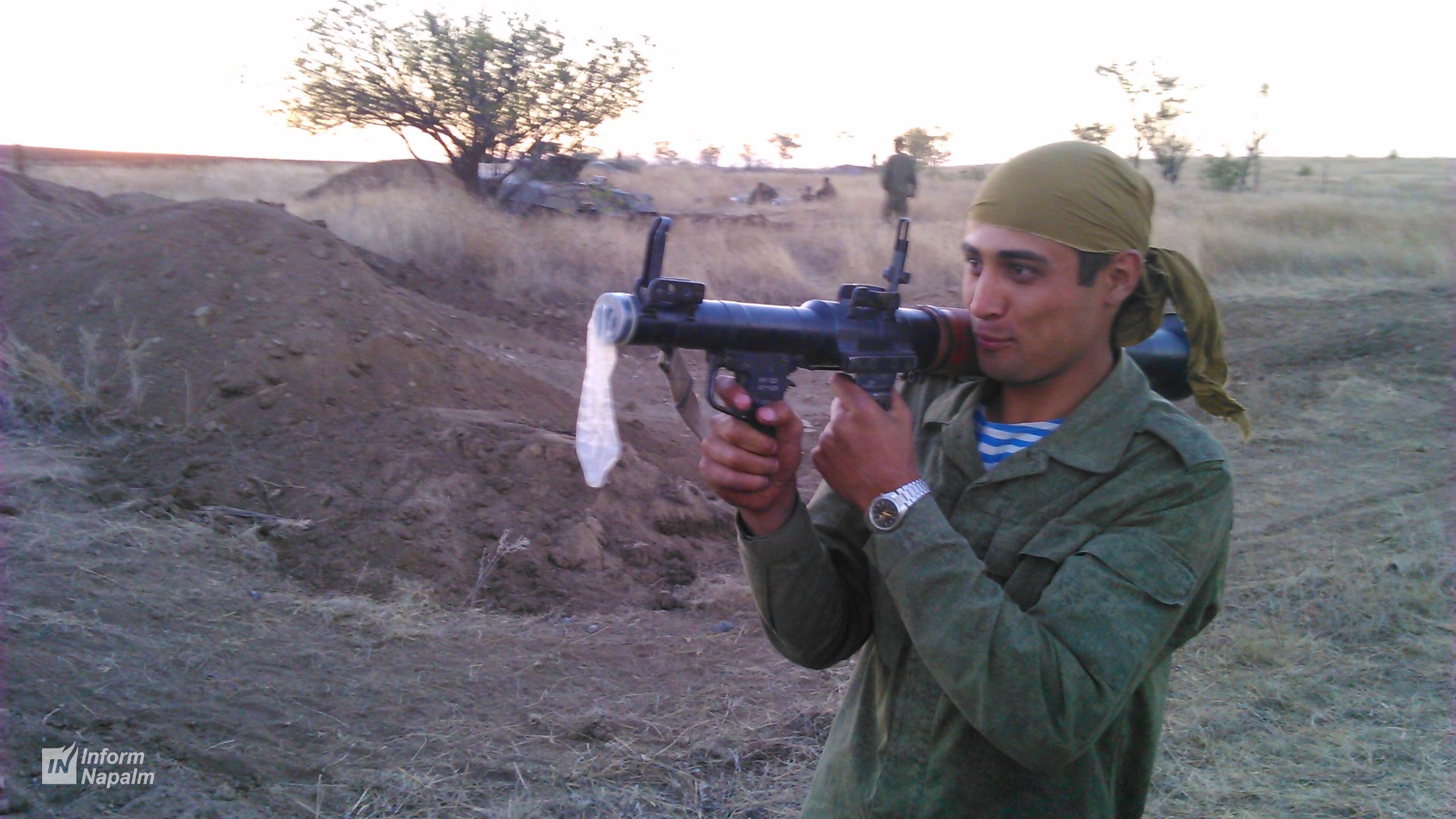 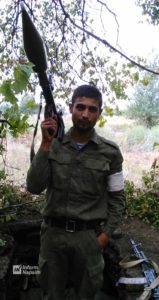 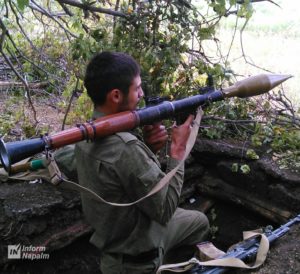 The author of the video, Vladimir V. has confirmed that it was taken next to a checkpoint not far from Samsonivka in Luhansk Oblast of Ukraine. Based on the coordinates of the footage location: 48.362582, 39.632740, we established that the convoy with Russian infantry vehicles was driving from the road bypassing Samsonivka on the road towards Molodohvardiysk. 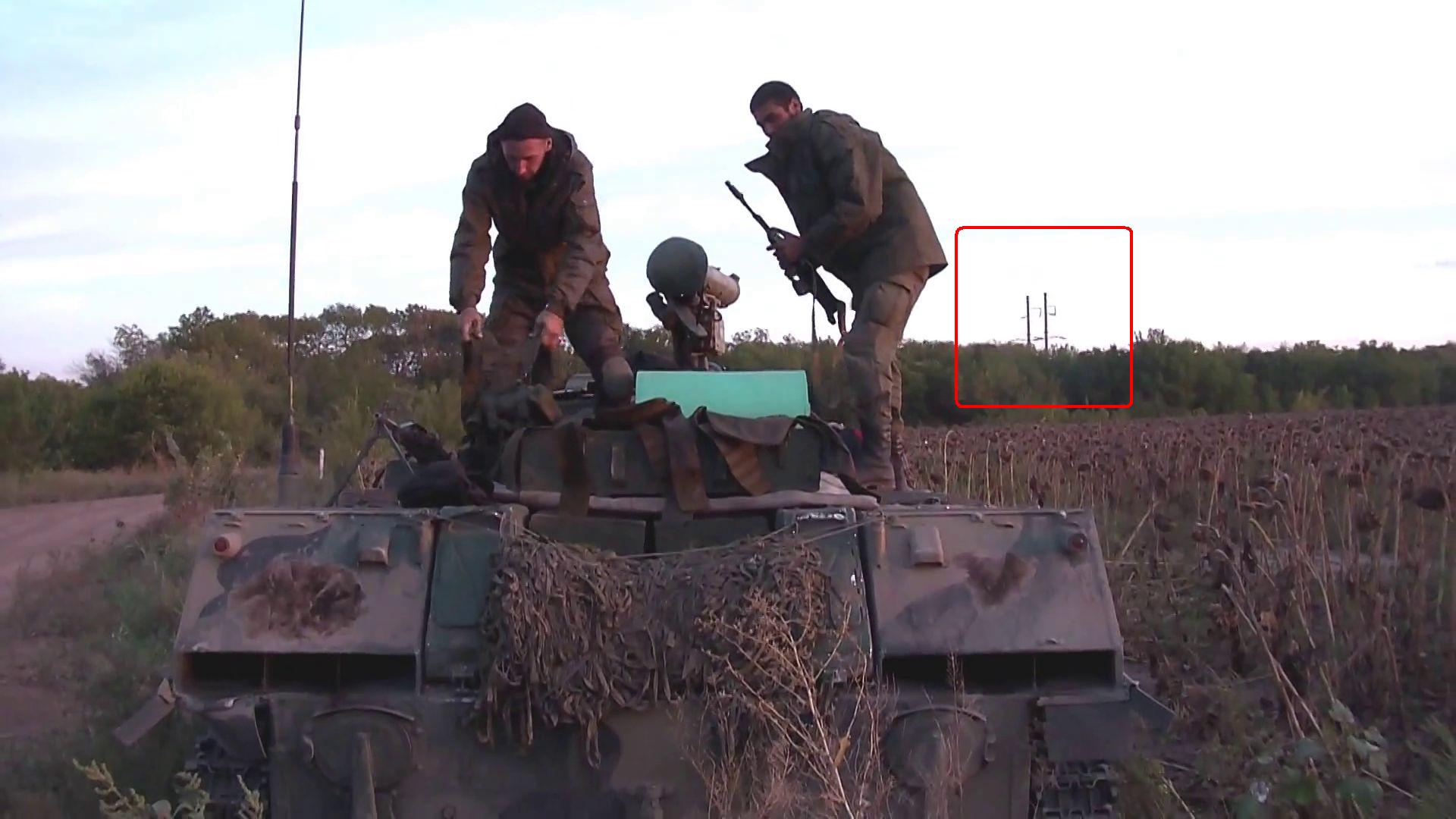 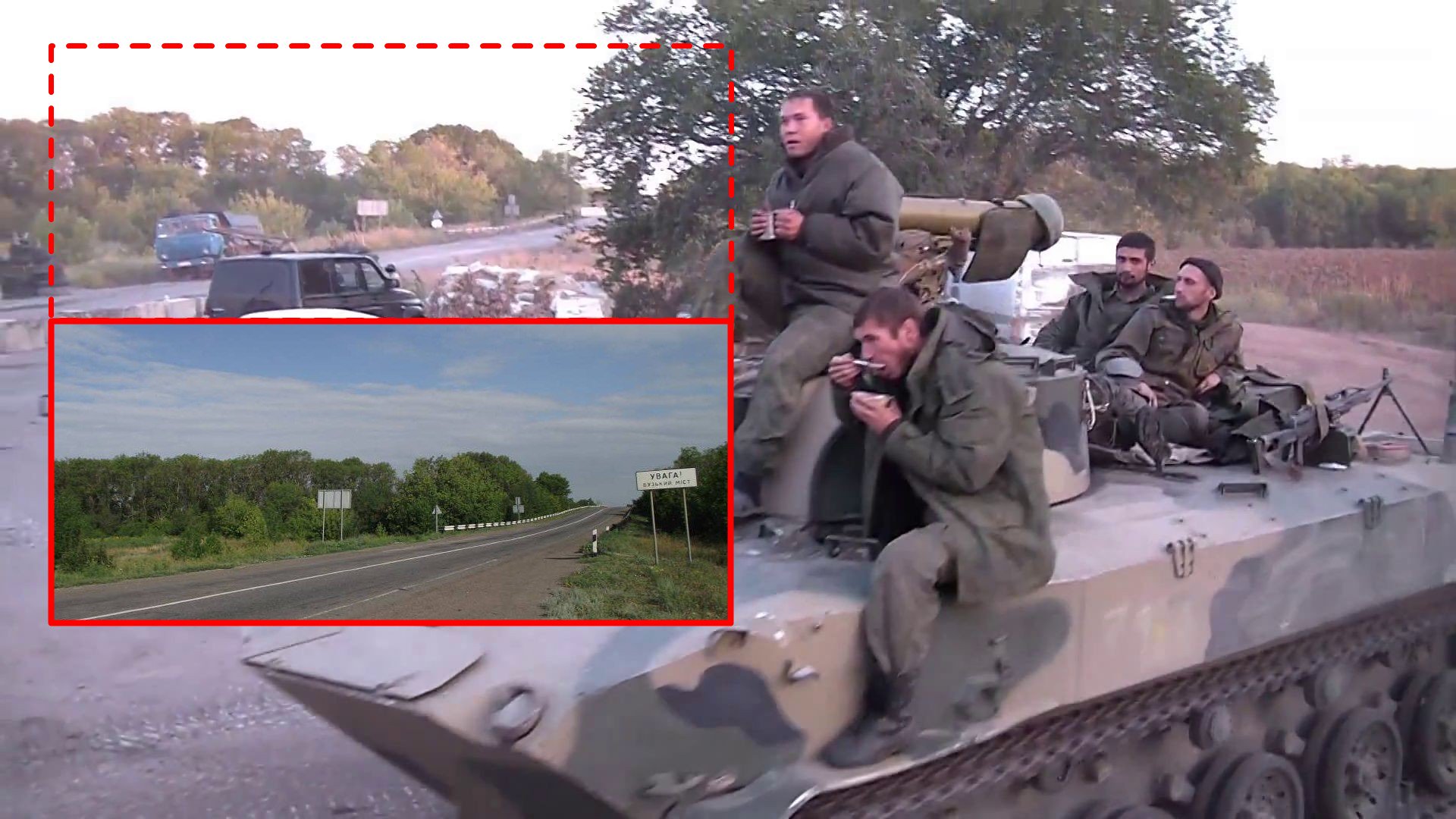 The author of this video published the same video under another title: “Novorossia, September 4, 2014”, on his YouTube channel. This gives us the date of filming. We searched VK for this video title and found the profile of Vladimir Vershinin. Apparently, he is the owner of the YouTube channel under the name Vladimir V. who had also posted this video to his social media profile.

Vershinin’s photo album corroborates our assumption that the location was the checkpoint near Samsonivka. The photo shows the characteristic roofing of a roadside kiosk. 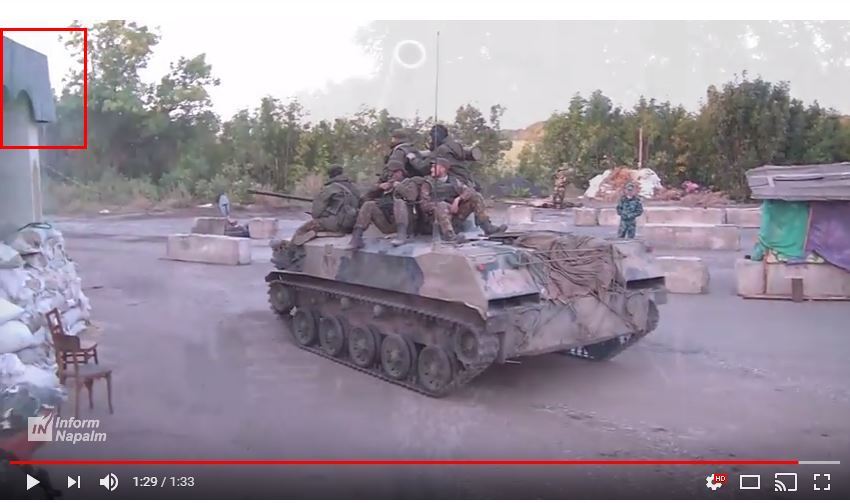 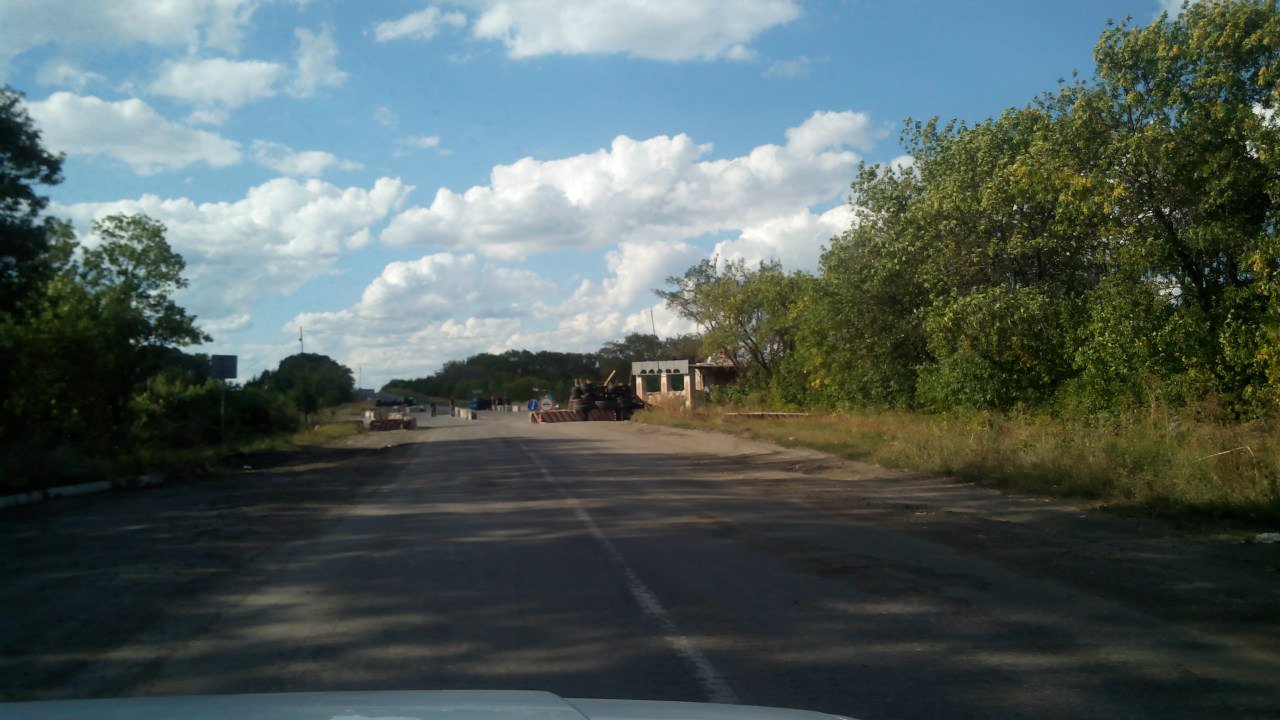 There is a frame that deserves a special note – at the end of the video a Russian T-90A main battle tank is seen next to the same checkpoint. Tanks of this modification were observed by InformNapalm earlier in the area of Luhansk. Read more: Russian T-90 Tanks of the 136th Motorized Rifle Brigade in Luhansk Oblast. 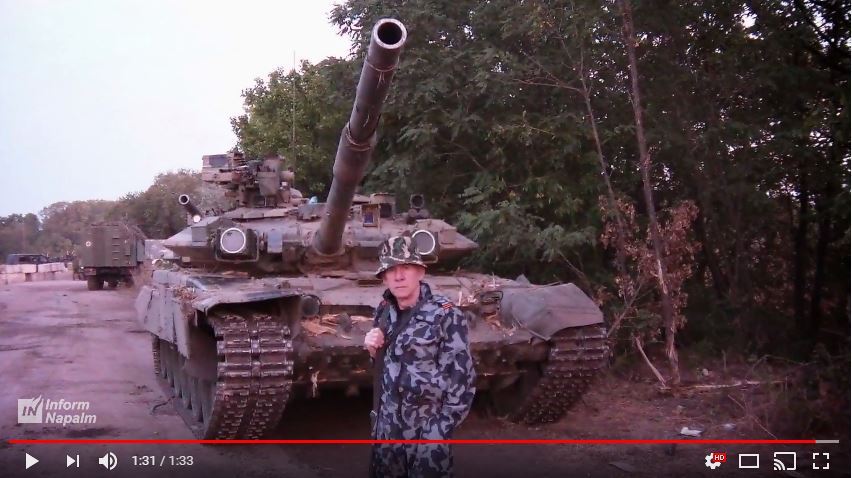 Among the photos of the tank crews of the 136th Motorized Rifle Brigade (MRB), who were sent to the Ukraine as part of the “Southern Group of Forces”, there are also joint photos with the paratroopers from Pskov. This was the way battalion tactical groups were formed from parts of different units, and the picture below gives a glimpse of one of them with tanks of a mechanized infantry unit moving together with airborne IFVs of an air assault unit. 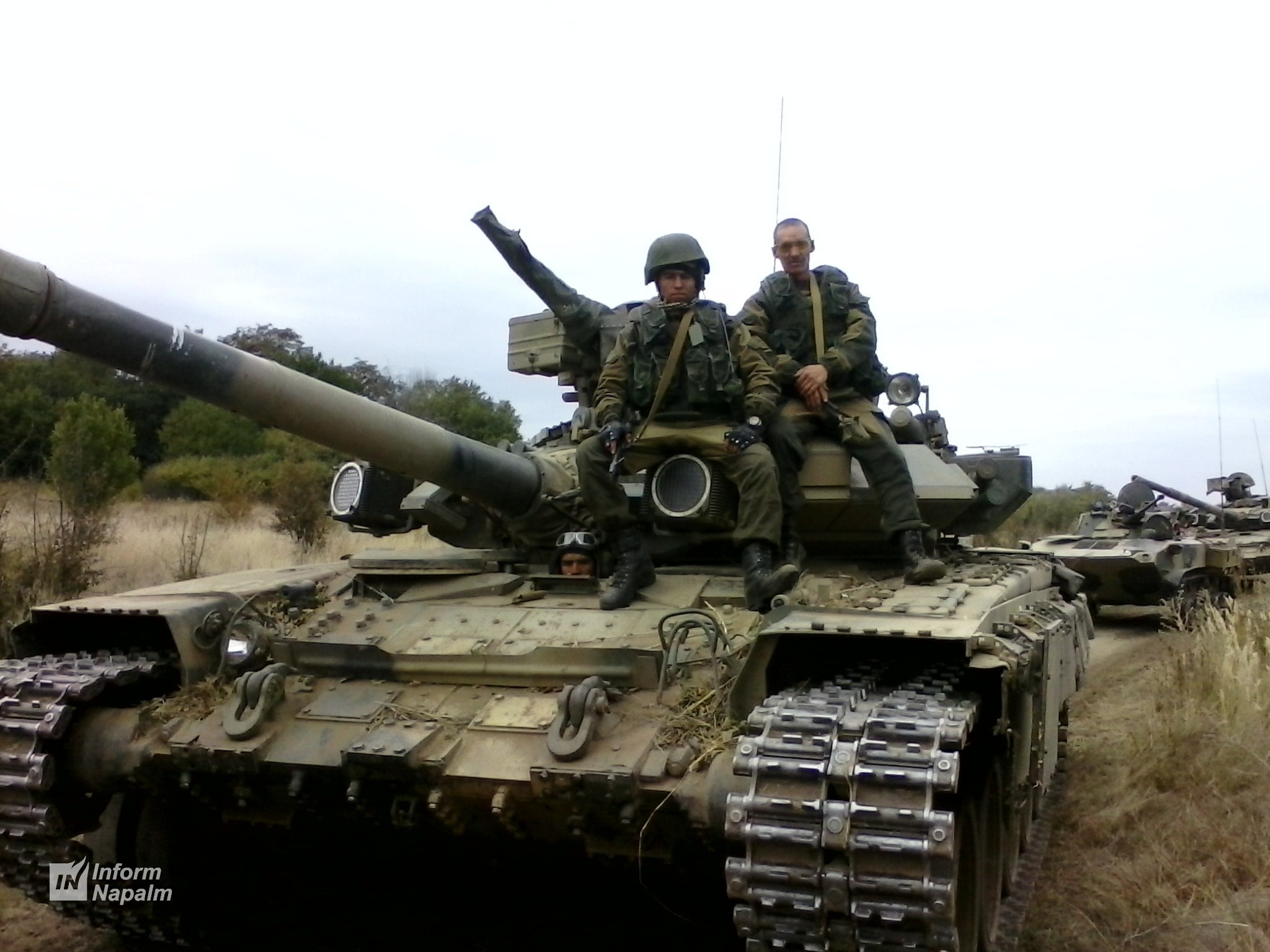 The experience of combat action in Ukraine prompted the Russian military command to reinforce all fighting air assault subunits with tank companies.

While working on this investigation, we identified many Pskov paratroopers that were put forward for decorations for their participation in the war against Ukraine. It will be the subject of our next Investigations.

This publication was prepared by Victory Krm specially for InformNapalm. We are sincerely grateful to the blogger Askai for geolocation of the images and identification of the author of the video.

No Responses to “Russian soldiers identified through information from a video”