In 1947, CIA analyst Sherman Kent, the father of intelligence analysis, claimed that in peace time, policy makers get up to 80% of the decision-making information from public sources. Later, in the 1970s, Samuel Wilson, Director of the U.S. Defense Intelligence Agency, stated that up to 90% of intelligence comes from open sources, and merely 10% is obtained through the agent network (HUMINT). In the modern connected world, with the Internet, social media and other means of communication being omnipresent, up to 99% of intelligence can be obtained from open sources. Protected data are often more eloquent, but using both types of data offers the most efficient combination.

This is the first feature in a series of publications prepared by InformNapalm volunteer intelligence community to demonstrate the consolidated data obtained through open-source intelligence (OSINT), then complimented and confirmed by the non-public and confidential data extracted from the computer systems of the chief of staff of the reconnaissance battalion of Russian Army’s 136th Motorized Rifle Brigade (MRB), military unit # 63354. The non-public part of the intelligence data used for the consolidated analysis was provided to InformNapalm volunteers on exclusive terms by hacktivists of the Ukrainian Cyber Alliance(UCA and CyberHunta).

Meet the source of the confidential data

Doroshenko Oleg Vladimirovich, born on October 27, 1984. As of mid-2014, captain Doroshenko served as the chief of staff of the reconnaissance battalion of Russia’s 136th MRB (military unit # 63354).

He got into crosshairs of the UCA hacktivists after his deployment to Donbas, where he accessed his personal e-mail from the PC of the reconnaissance commander of the 2nd Army Corps (AC) of the Luhansk People’s Republic (LPR) terrorist organization. His Donbas deployment is assumed to have lasted from autumn 2014 till winter 2015.

The disclosures include documentary evidence of the deployment of military personnel from Buynaksk (military unit # 63354) to Popovka  (Kamenskiy raion of Russia’s Rostov Oblast), which is only 18 km away from Izvaryne border point in Ukraine’s Luhansk Oblast, in August 2014.

Official orders stored on Doroshenko’s PC contain clearly separated sections dedicated to departures and arrivals of the military personnel to/from training grounds, missions, hospitals, and vacations. The deployment in Popovka was based on the combat order # 015 of August 12, 2014, issued by the chief of staff of the Russian military unit # 47084.

This military unit number matches the Command of Russia’s 58th Army in Russian Federation’s Southern Military District (the Republic of Northern Ossetia-Alania, the city of Vladikavkaz). At that time, this Army was under the command of Andrey Viktorovich Gurulev. General major Gurulev is under investigation of Ukraine’s Prosecutor General Office on charges of crimes against the national security of Ukraine.

While on the mission, military personnel from Buynaksk were under the direct command of guards colonel Mikhail Borisovich Lebiodko, commander of military unit # 63354, as confirmed by unit order # 198 of August 23, 2014, until September 6, 2014.

Background for the deployment of the Russian Army in Ukraine

August 2014 was a month of intense fighting and a sweeping offensive of the Ukrainian Army that could have resulted in a complete defeat of Russia-supported illegal armed groups (IAG) in Donbas. There were heavy battles near Luhansk Airport during that month. Ukrainian Army concentrated forces for a final thrust towards Ukraine’s state border. Restoring control over the border would have prevented Russian convoys with military equipment and ammunition from getting across, and would have effectively spelled the end of the proxy “people’s republics” in Donbas. In order to turn the situation, the Russian high command decided to deploy large forces in the form of battalion tactical groups consisting of various military units to reinforce the IAGs.

InformNapalm obtained from captain Doroshenko’s hacked e-mail the intelligence data on the group of military personnel from Buynaksk deployed to Popovka near the Ukrainian border which counted around 500 servicemen – scouts, tankmen and artillerymen. The term for “a mission” was re-worded as “assignment to the Southern Group of Forces in Rostov Oblast” in the orders issued in the military unit in summer and autumn 2014. The new wording was based on the combat order mentioned above or, in several instances, on telegrams from the chief of staff of the 58th Army. It is this term, that is shared by all documents pertaining to the military personnel from Buynaksk, whom we found and spotted in Ukraine. 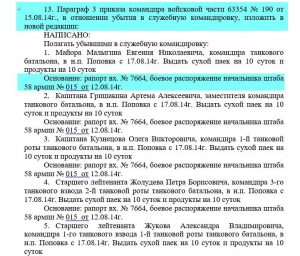 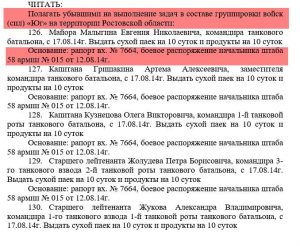 The retrieved documents mention one more combat order # 10 of August 10, 2008, of the commanding officer of the 58th Army. That order referred to “performance of the combat duty in the Republic of South Ossetia on peace enforcement in the Republic of Georgia”. Again, this confirms the combat, rather than training, nature of the orders.

According to the retrieved secondment orders, the military personnel of Russian Army’s 136th MRB began their combat missions as part of the Southern Group of Forces starting from the dates indicated below and broken down by category:

This is the first feature opening a series of publications on this topic. It will be followed by a disclosure of the full lists of the military personnel of the 136th MRB with the information about servicemen awarded or killed as a result of being involved in combat missions on the basis of the orders issued by the command of the Southern Military District of the Russian Federation. Notably, many last names from these lists have already been mentioned in OSINT investigations or media reports adding up to the evidence of Russia’s military crimes.

Below, is the list of tankmen assigned to the Southern Group of Forces in Rostov Oblast by the Order # 190 of August 15, 2014. Further details are provided in the table with the indication of social media accounts of the military personnel, their personal numbers indicated in the orders, their ranks, exact positions, and links to OSINT investigations where the relevant military serviceman was mentioned in the context of either the Russian intervention in Ukraine or due to being awarded combat honors in peace time.

Below, you can see links between VK social media accounts of tankmen from the 136th MRB (red dots) with their shared friends (black dots). In the right column, you can see first and last names, and VK IDs:
visit the social connections cluster page custom-built for InformNapalm readers. You can enter the last name of a serviceman in the search field on the left, and see who he is connected to. 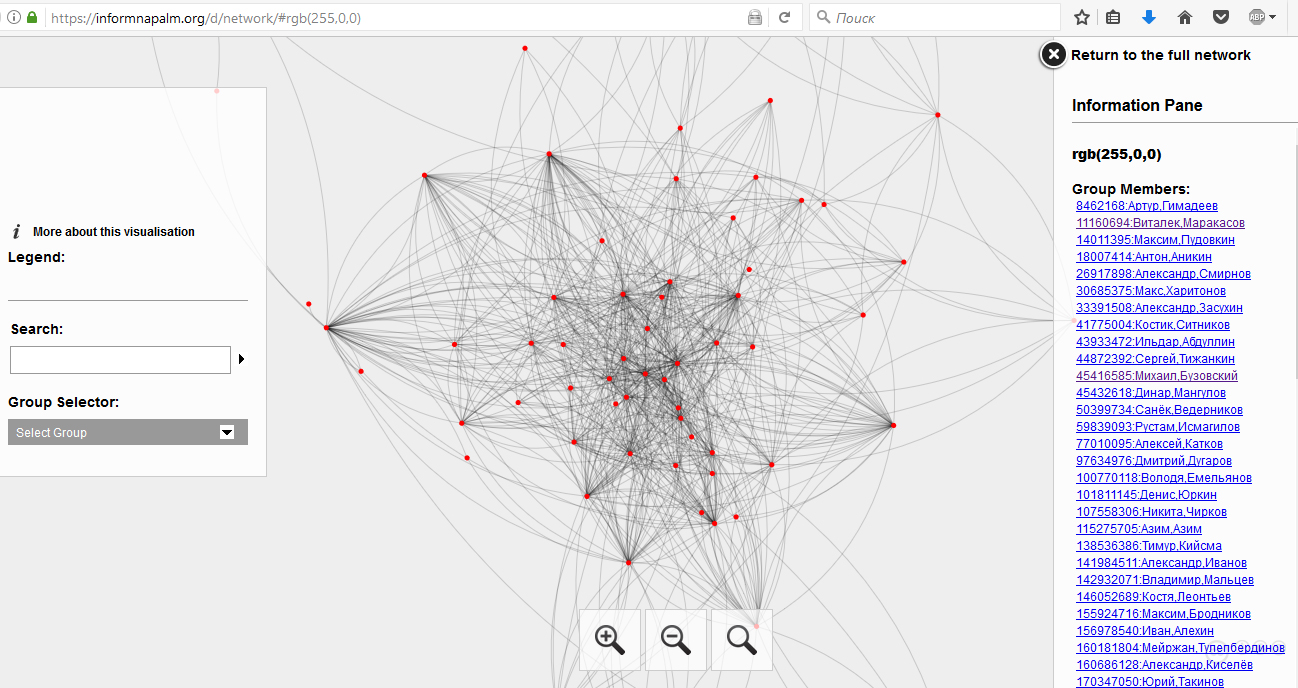 The information from secondment orders of Buynaksk tankmen to the borderline area with Ukraine in 2014, not only confirmed the available information but also helped locate other military personnel awarded for taking part in the war against Ukraine: 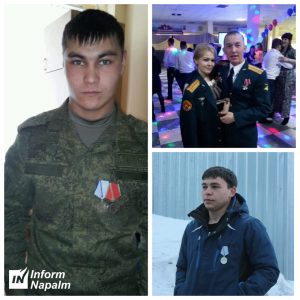 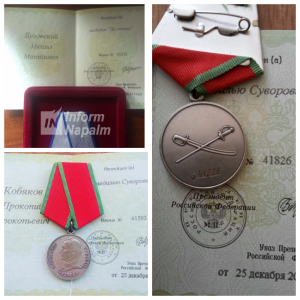 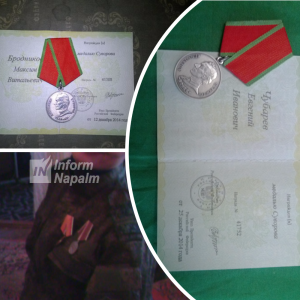 This table also contains details of Vitaliy Veniaminovich Marakasov, a Russian military serviceman who loved to make selfies in Donbas. His photos of the Russian incursion into Luhansk Oblast on T-90A tanks were featured in a number of InformNapalm’s OSINT investigations and were used in  Donbas in Flamesguidebook. We could establish the exact position of Marakasov through the information from the retrieved secondment orders. He is a grenade launcher operator of the 3rd section of the 3rd platoon of the 7th company of the 3rd mechanized infantry battalion of the 136th Motorized Rifle Brigade of the Russian Army.
It is likely that the above table features the people who posted the video of the T-90A incursion near Novosvetlovka of Luhansk Oblast (the video was found on social media by investigative blogger Askai).

Thus, we have gathered information about 73 military men of the armored battalion of military unit # 63354 from Buynaksk, including 26 “awardees”.

It can be seen from the orders stored by Doroshenko that some people have not come back alive from assignments to the Southern Group of Forces. InformNapalm mentioned in its previous publication that the only known casualty was Aleksandr Igorevich Vedernikov, commander of the command tank of the 1st armored company of the armored battalion (EX-763258, DOB June 30, 1993). He was also mentioned in Order # 190 of August 15, 2014, dispatching a group of military personnel to Popovka near the Ukrainian border on August 17, 2014.
On the basis of another order of the commander of military unit 63354 under # 235 of October 1, 2014, Aleksandr Vedernikov and another serviceman Oleg Viktorovich Kuznetsov (X-261642), effective from September 2, 2014, were delisted from the muster roll of military unit # 63354 in connection with their death.

Price of Silence for Relatives 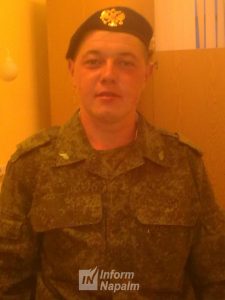 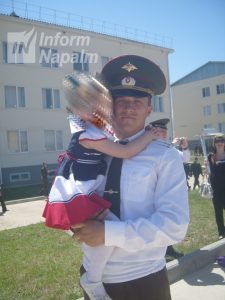 The InformNapalm team located social media accounts of Oleg Kuznetsov’s wife Nina, his mother-in-law, Tatyana Simakina, and his mother, Inessa Kuznetsova. Oleg’s parents live in the Girey township of Krasnodar Oblast in 241 Lenina str. Contact phone number of his father Viktor is 89604843026. His wife Nina lives in the city of Kropotkin. Oleg Kuznetsov’s relatives, as well as the mother of Vedernikov, the second killed serviceman, have not mentioned his death in their social media accounts at all. Only some posts by his mother indirectly confirm that she had lost a family member. According to Order No. 235, the price of silence includes: 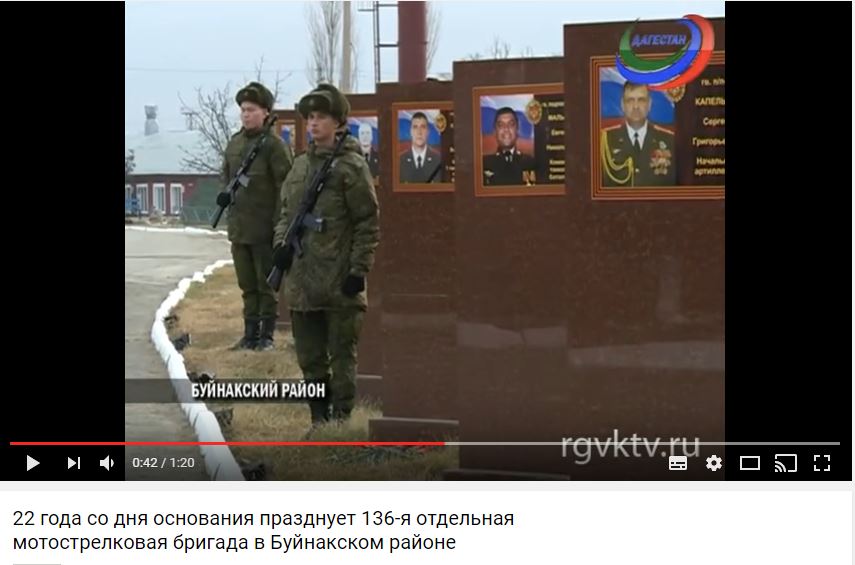 According to the order, the same payments were made to Vedernikov’s mother, Laysan Vedernikova. Aleksandr Vedernikov, a conscript soldier, was appointed as a tank commander on August 28, 2014. The amount of pay in his military specialization grade amounted to mere RUB 17,000 (about $ 300). That is the price Russian soldiers are doled out to carry out criminal orders, and ultimately to die for.

Some paragraphs from Doroshenko’s documents describe the status of the infosecurity and the protection of classified documents in his military unit: “The status of the secrecy procedures in the course of the management of the information classified as state secrets and the protection of the computer information against unauthorized access can be deemed satisfactory, subject to corrective action on the detected violations and deficiencies”.
Well, we beg to differ.

Thus, the open-source evidence of the involvement of Russia’s 136th MRB from Buynaksk in the combat action in Ukraine has been corroborated by documents. These materials will be used as evidence by the future international and, we believe, domestic Russian courts when even stones on graves of meaninglessly deceased Russian military servicemen would testify.

We are providing a link to the file archive of captain Doroshenko’s mailbox below. It contains a lot of information on the 136th MRB, including the muster roll of the reconnaissance battalion. We have excluded the orders, which are still analyzed by InformNapalm’s volunteers and will be used in our future publications (this is a link to the archive file without the orders).

This publication was prepared by Victory Krm and Mikhail Kuznetsov specially for InformNapalm web site. Translated by Oleksandr Ivanov, edited by Artem Velichko. An active link to the authors and our project is obligatory for any reprint or further use of the material.