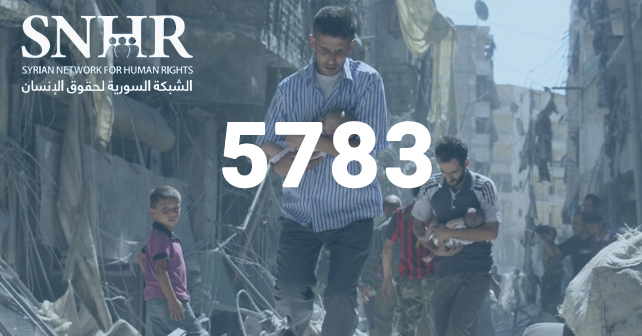 On January 27, the Syrian human rights organization Syrian Network for Human Rights (SNHR) issued a statement describing the scale of the deliberate attacks by Russian forces on the civilian population in Syria. Human rights activists revealed horrifying statistics about the Syrian operation by the Russian Federation for the period from September 30, 2015 to December 31, 2017.

According to SNHR, Russian forces killed at least 5783 civilians, among them 1596 children and 992 women. The Russians committed at least 294 massacres (killing 5 people or more at a time). The Russian military killed at least 53 health care workers, conducted 817 attacks on vital civilian facilities, including 141 attacks against medical facilities. In addition, Russian troops used cluster munitions in 217 attacks, and incendiary munitions in 113 attacks. 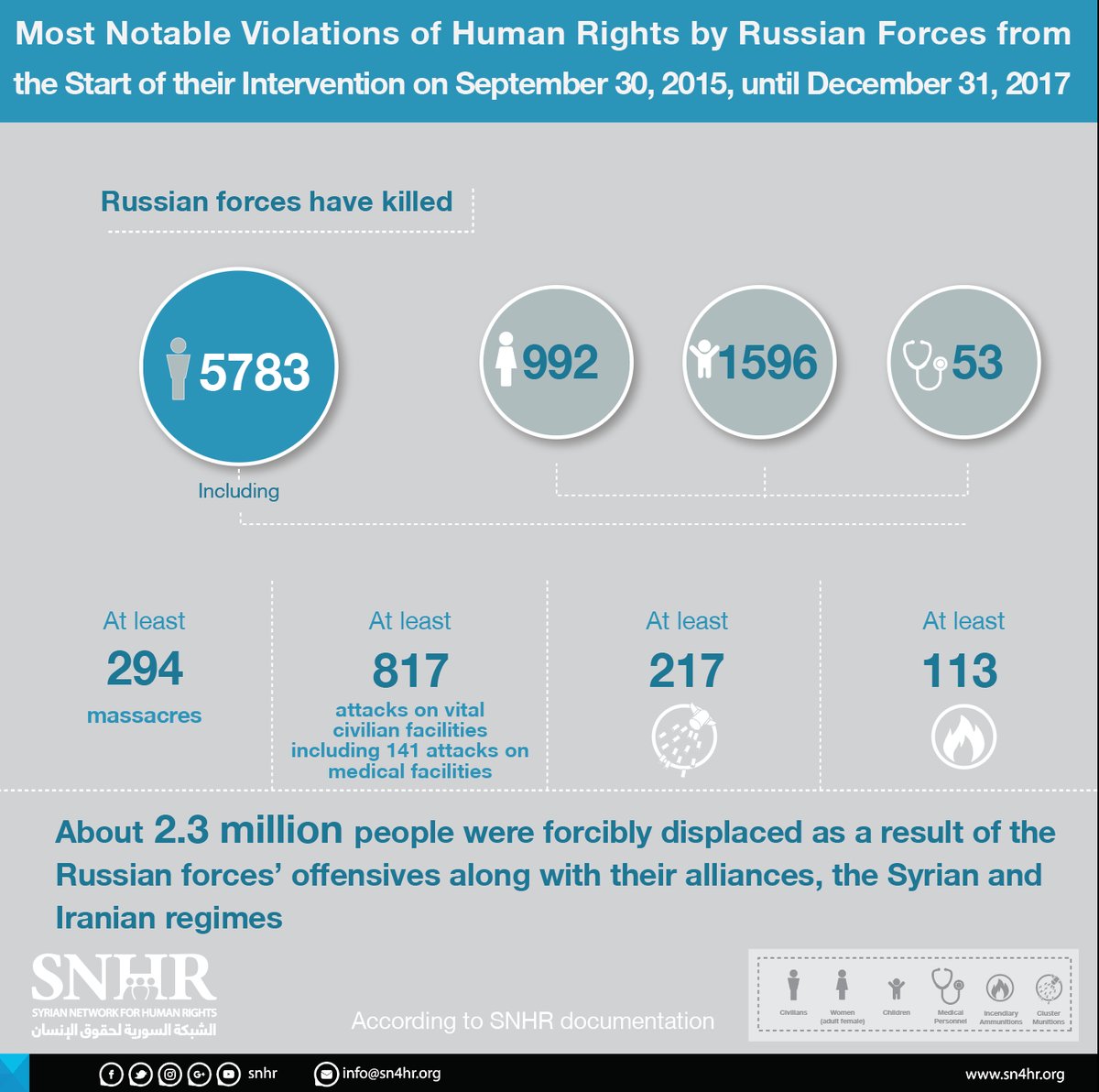 In the statement, human rights defenders emphasize that Russian troops attacked not only Syrian rebels and their bases, but deliberately and repeatedly bombed civilians, including with prohibited munitions. Because of these actions, the regime of Bashar Al-Assad gained advantage in many provinces in Syria – Aleppo, Hama, Damascus, Deir ez-Zor, and Raqqa. According to SNHR, 2.3 million Syrians were forced to flee their homes and become refugees, fearing reprisals from the combined Russian, Iranian, and Assad’s regime forces.

Russia claims that it is trying to find a political solution to the situation in Syria, while continuing  deliberate killings of the civilian population, destroying medical facilities and schools, as well as other vital objects of civilian infrastructure. In addition, Russia has violated the agreements reached in the direct talks with the representatives of the Syrian opposition and signed by the Russian side.

The Russian Federation took no action to prevent another chemical attack in East Ghouta by a Russian ally – the forces of Bashar al-Assad. This attack had civilian victims too. On January 23, US Secretary of State Rex Tillerson said that Russia had violated the obligations of the framework agreement, according to which it was supposed to guarantee that Assad’s regime would abandon its use of chemical weapons in 2013. Under the same agreement, the chemical weapons were supposed to be submitted to destruction under the supervision of international observers.

Syrian and international human rights organizations continue to appeal to legal norms, as well as the conscience of the Russian side, hoping that Russian forces will stop its cynical attacks against Syrian civilians. However, their appeals are not stopping the aggressor. Bombardments, chemical attacks, and massacres continue.

From the collective to the individual responsibility of Russian pilots

On the issue of war crimes in Russia in Syria, it is important to understand that there are specific perpetrators of each of them. The killings of civilians in Syria are a responsibility of both the top leadership of Russia and the people who follow its criminal orders.

InformNapalm international volunteer community has repeatedly raised the topic of personal responsibility in their publications. Previously, the community volunteers published the database of the 116 Russian pilots and crew members in Syria, which displays the information in several infographics grouped by types of aircraft and tail numbers.

The release of the article with pilot data sparked indignation in Russian media, who called the leak of these ‘secret data’ extremely dangerous.

This publication was prepared specially for InformNapalm. Translated by Andrii Gryganskyi, edited by Max Alginin
(Creative Commons — Attribution 4.0 International — CC BY 4.0)
Repost and share with friends.
For notifications about InformNapalm investigations follow us on Facebook and Twitter.