Russians Take It Out on the Ukrainian Refugees 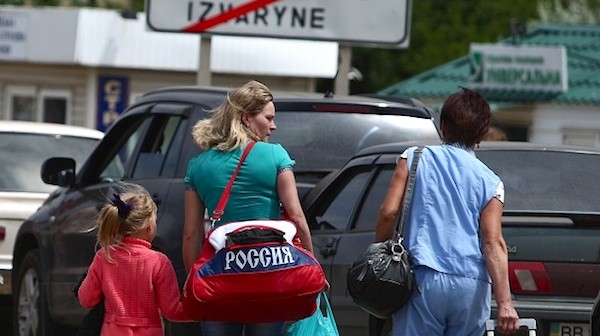 The ethnic conflict targeted to the Ukrainian refugees is growing in Russia. The Russians, pissed-off by the crisis and sanctions, blame the ethnic Ukrainians and take it out on those who has recently escaped the war in search of peaceful life.
A Russian regional information agency ‘Kam 24‘ reports that a household brawl on the ethnic basis took place in Petropavlovsk-Kamchatsky, Russia. According to refugees arrived from Luhansk a local female resident beat their daughter miscalling her ‘khokhlushka’ [degrading name of the Ukrainians].
As for Olesya Mustafa, who came from Ukraine, her children were coined here. 14 years old Irina and 11 years old Polina arrived to the peninsula to live with their grandmother, away from the war in Donbas. They settled down in a house in Industrialnaya street. Last weekend a couple of incidents happened which made the family to call the police. 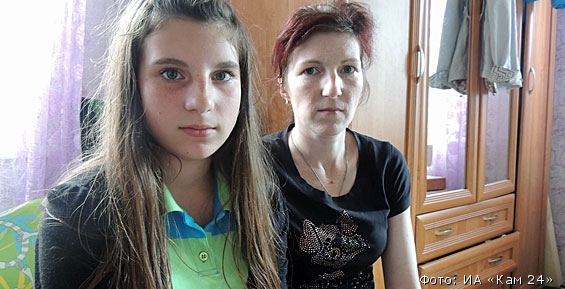 Irina said that she with Polina and other their friends played in the yard on Saturday. They built 2 huts near a tree – one for younger children and one for coevals. When they returned to ride on a swing after a while one of the huts was destroyed, and the adults in the yard were unkind.

“We saw that one of the huts was broken. We asked the adults why did they do that. But they started to swear at us, chuck us out and abuse our mother. Then they started to call us ‘khokhlushkas’ and said that we should have been given firearms [and stayed there]” – Irina says to the ‘Kam 24’ reporter.

She added that the flash-point of the conflict happened the next day, on Sunday. The girls were riding on the swing not far from the house. Soon 5 year old Rodion came there, the son of one of the women who conflicted with the refugees the day before.

“The boy started asking us with dirty language why had we arrived here. Then one of the boys who played with us threw a stick at him and Rodion ran away. After a while his mother came. She grabbed me by my hair, banded me over and punched. Then the neighbor promised to crash my face and even kill me if I say at least a word to her son. Leaving she called me ‘khokhlushka’ and said I did not belong here”, Irina added.

The same day girls’ relatives called the police and reported the crime.

“On Monday we visited the hospital, where a doctor examined my daughter. They also took the X-Ray picture of her chest. The doctor said that the child had a bruise and sent us to check the heart condition. Also they promised to send all the information to the police”, said the 36 years old Olesya Mustafa, the mother of the affected girl.

The police confirms – the children hospital No. 2 indeed sent the information about a mother with the daughter which was beaten by a woman on a playground in Industrialnaya street. At this time the police carries out the background check.

According to the affected side, these incidents had purely inter-ethnic basis. 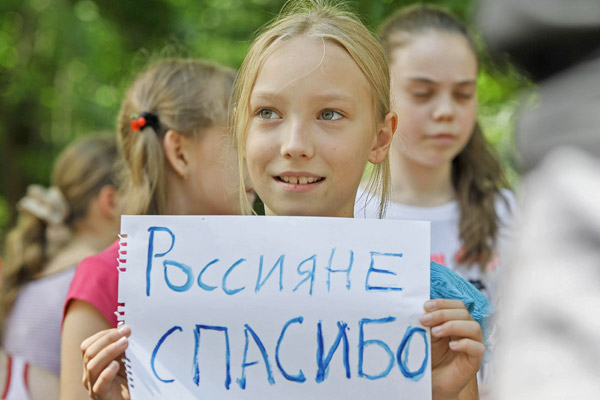 Let us remind you that on August 17, the Russian business newspaper ‘Vzglyad’ [Sight] also published (in Russian) an article about the integration problems the Ukrainian refugees experience in the Russian society. The newspaper highlights the following: “The Donbas residents do not differ much from most of Russians in terms of culture, traditions and language. But anyway the problems with assimilation became a surprise for a lot of refugees from the South-East of Ukraine. These problems are pretty significant, we see constant conflicts between the refugees and the locals and even the marginalization of the refugees.”

Despite the fact that Russia’s Federal Migration Service overestimates (in Russian) the number of refugees, there are a lot of people who believe the propaganda and flee Ukraine to Russia, hoping for ‘brotherly love’. But it appears that nobody waits for them there, and even worse – they are treated as the root of all problems. Apparantly, in this situation we should expect not only household brawls but also the ‘Ukrainian’ massacres.

No Responses to “Russians Take It Out on the Ukrainian Refugees”