Secrets of public procurement of Russian Ministry of Defense: TOP-200 most expensive contracts. 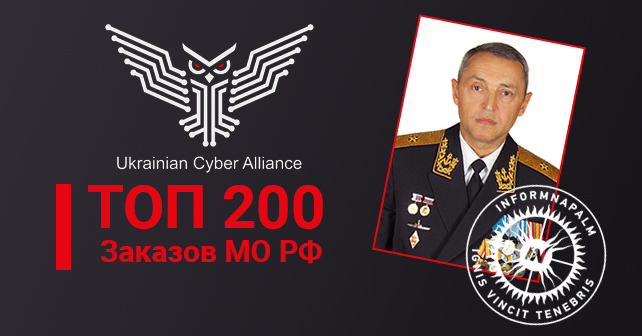 Despite the burden of sanctions, the fall in oil prices and other difficulties of the Russian economy, government orders for the of the Russian military look very impressive. While the Russian government has raised the retirement age and advised citizens to tighten their belts – trillions of budget funds continued to flow offshore through various front companies.

However, on January 5, 2019, the Ukrainian Cyber Alliance (UCA) hacktivists gained access to the computers of the public procurement department of Russian Ministry of Defense (MoD) led by Rear Admiral Andrei Vernigora. The UCA got access to a large array of documents, which among other things contained data of the Russian Ministry of Defense with the mark “Computer-aided tender system of the state defense order” [Rus.: АСТ ГОЗ]. Some of the retrieved data has been handed over to InformNapalm volunteer intelligence community.

InformNapalm volunteers made a preliminary analysis of the lists with thousands of internal numbers and contract titles of Russian Ministry of Defense for 2018. They selected and structured the top 200 most expensive contracts of the Russian MoD, which may help the Russian anti-corruption activists to find traces of embezzlement and laundering of budget funds.

SpetsStroy-1 LLC holds the top position in the table. Year after year, only SpetsStroy-1 has been receiving more than 1 trillion rubles [$ 14.4 billion] from the Russian Ministry of Defense, subcontracting more than 50% of the total volume of unclassified construction works. However, not only the houses of ordinary Russians, but also the barracks repaired by SpetsStroy, continued to crumble. At the same time, labor forums are full of negative feedback about this company. .

SpetsStroy-1 has repeatedly appeared in the graft scandals around the Russian MoD, for example, in the high-profile case of businessmen Alexey Eckert and Dmitry Bushmanov, the co-founders of RusAlliance Stroy LTD, who were arrested for refusing to give the representatives of SpetsStroy 700 million rubles in kick-backs. The details of the case and audio recordings with the evidence of extortion were published by the spouse of Eckert in her video message:

Not trusted to repair a kindergarten, but given millions from the Russian MoD

Let us also note another case of the Federal State Unitary Enterprise Main Military Construction Directorate for Special-purpose Facilities (FGUP GVSU), which holds the 10-11th place in the rating of the largest budget allocations.

When we reviewed subcontracting tenders of the FGUP GVSU for special-purpose facilities, it turned out that its largest contract for 2018 in the amount of 800 million rubles went to a strange subcontractor called DV-INVEST LLC. In 2018, this contractor participated in a handful of low-budget tenders and even failed to win the contract for improvement and repair of the kindergarten No. 2 Zhuravushka in the Sakhalin Region. Nevertheless, it went on to easily win a huge contract from the defense enterprise.

These are just a few few quick findings from the table. Russian anti-corruption activists are sure to find interesting clues in our TOP-200 companies with the largest budget allocations from the Russian MoD. We are confident that each of these companies will have a spectacular history of kick-backs, embezzlement and corruption schemes.

Let us conclude this signal review with the catch words of Russian Prime Minister Dmitry Medvedev, who once told pensioners in Crimea: “There is no money. But you hold out thee. Have a good day, and good health.”

Hacktivists Broke Into a Server of the Russian Ministry of Defense Department.

A link to the authors and our project is obligatory for any reprint or further public use of the material.
(Creative Commons – Attribution 4.0 International -CC BY 4.0)
Repost and share with friends.

No Responses to “Secrets of public procurement of Russian Ministry of Defense: TOP-200 most expensive contracts.”