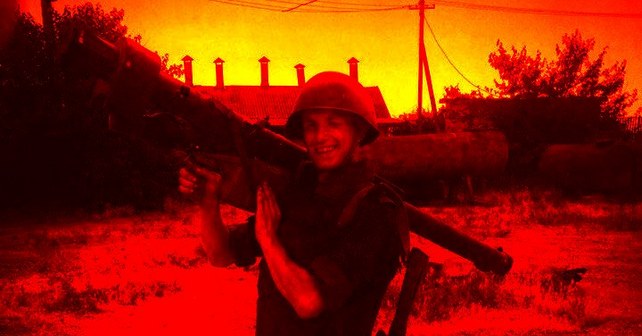 In April 2016, the General Intelligence Directorate of the Ukrainian Defense Ministry reported the arrival of a detachment of the 45th Separate Spetsnaz Brigade of the Russian Armed Forces to Novoazovsk.

“The transfer of a unit from the 45th Special Purpose (Spetsnaz) Brigade of Russian Airborne Troops (from Kubinka, Moscow Oblast) to the town of Novoazovsk has been confirmed. Therefore, sabotage and reconnaissance activities by Russian occupation troops are expected to intensify in the direction of Mariupol,” the statement said.

In June 2016, the General Intelligence Directorate released several names of Russian servicemen from the 45th Spetsnaz Brigade with their photos and personal information. However, the intelligence office did not provide any photographic or video evidence of their deployment to the occupied parts of eastern Ukraine. We hope that this evidence will be declassified in the future and be presented to the general public and international court.

Here the InformNapalm team presents its own information on the presence of servicemen from the Russian 45th Spetsnaz Brigade in Ukraine.

Mikhail Rusinov posted some information about himself on the dating website and signed his photo simply “It’s me.” 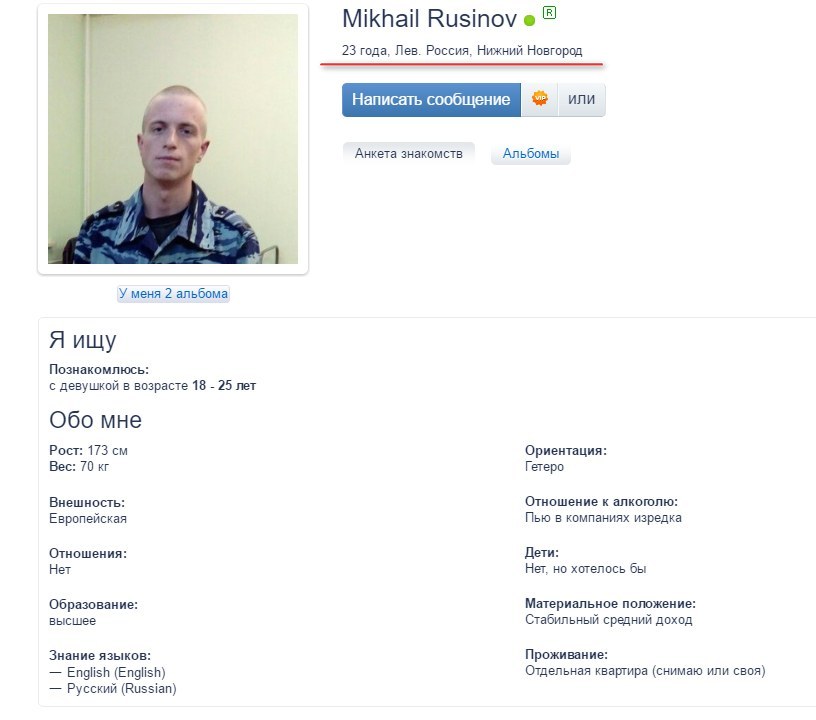 On the same dating site Mikhail Rusinov posted a photo where he and his comrades were standing in front of a fence around the base of the 45th Spetsnaz Brigade, military unit #28337, in Kubinka, Moscow Oblast. There is big board with pictures and an emblem of the 45th Brigade (it is marked by an arrow) behind the soldiers in the photo. 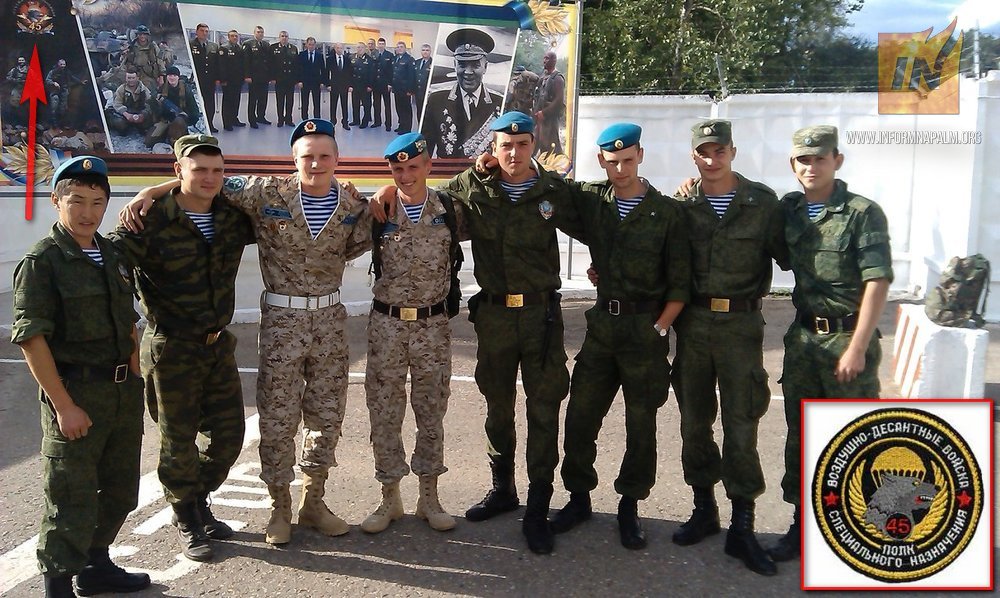 Here is another photo from the dating site. 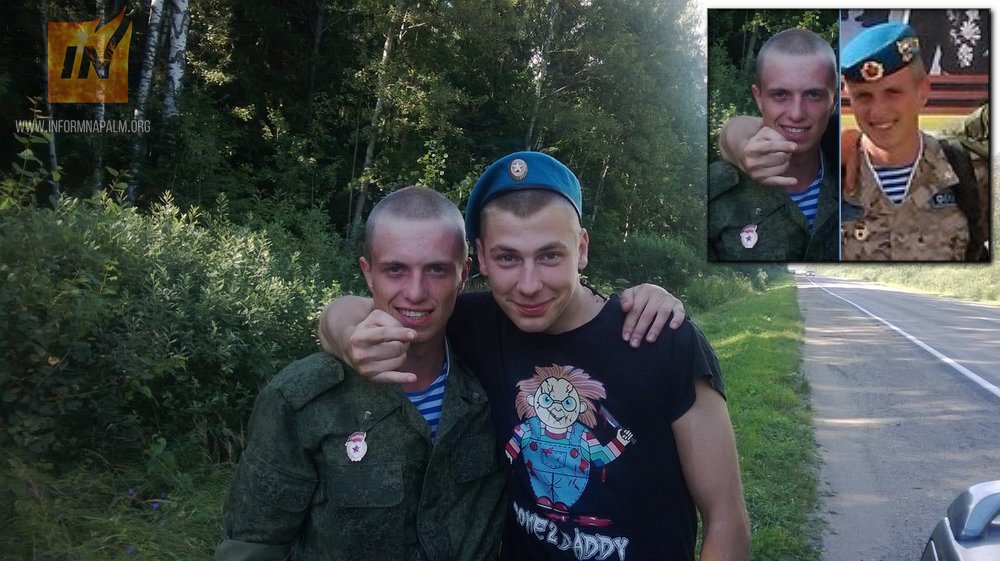 In May 2016, Mikhail Rusinov started posting his photos from the Novoazovsk area on social media. At the end of summer, he suddenly deleted everything that directly pointed to his illegal presence in the territory of a foreign country. In addition, he changed his last name from Rusinov to Neizvestnykh and the year of his birth from 1993 to 1950 on his profile. Was the Russian soldier frightened by something or was told to do so?

There are still a few photos from “the Ukrainian tour” remaining on Rusinov’s page in open access: a photo of the flag of the so-called DPR and a selfie on the coast of the Azov sea taken near the village of Bezimenne. 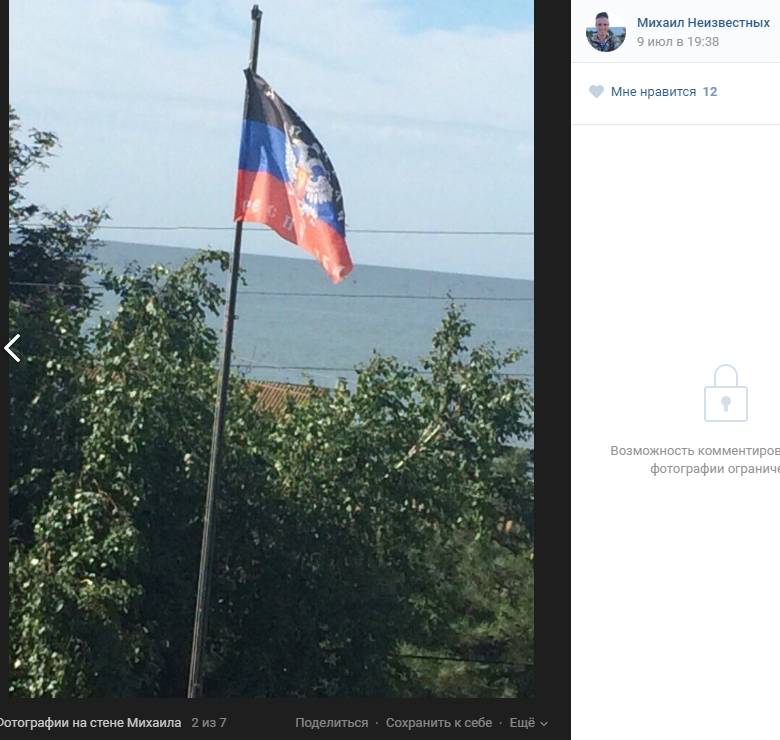 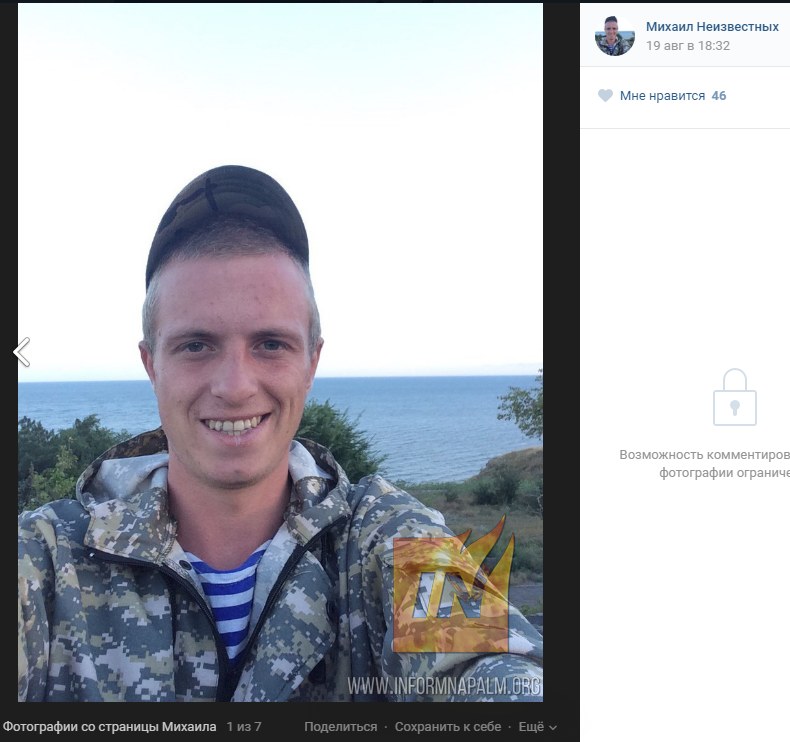 Note: Under each photo, there is a date when it was posted on a social media website and recorded by the system. 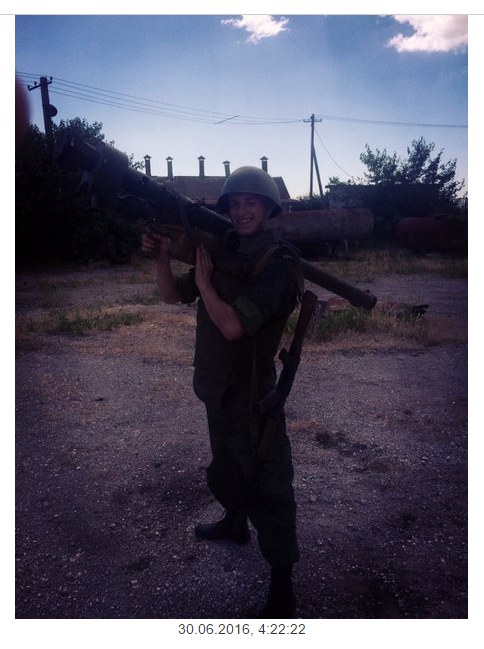 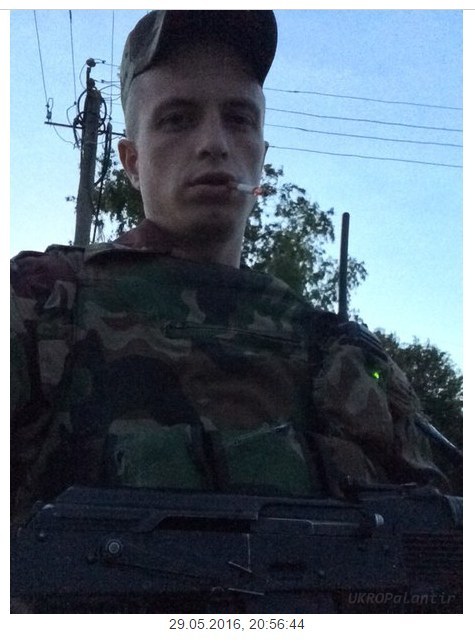 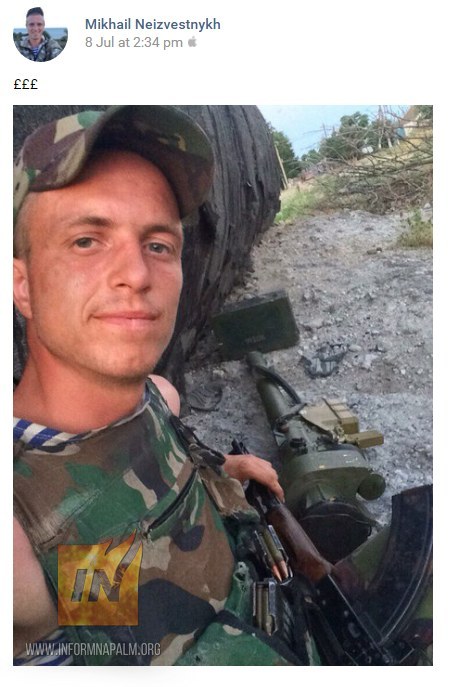 This hotel, as well as the nearby resorts of Parus and Donchanka, have not been used for recreation by civilians for a long time, but were converted into barracks and positions of Russian “vacationers” who constantly go on “Ukrainian business trips”. 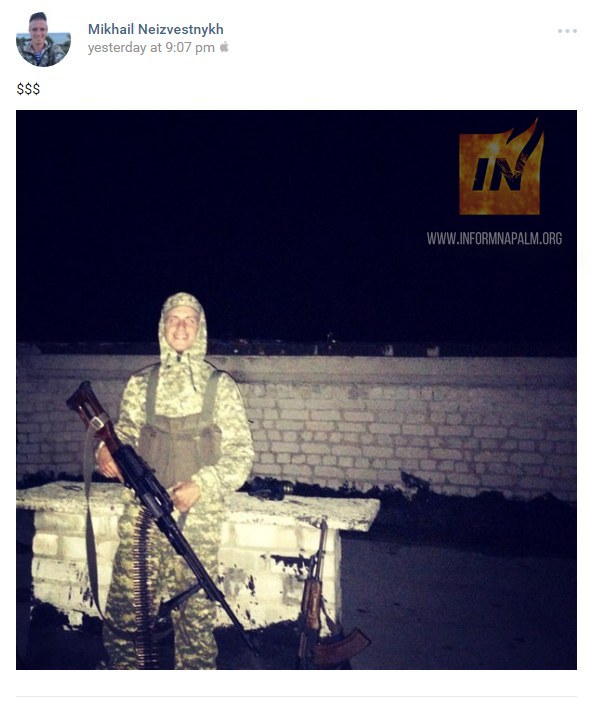 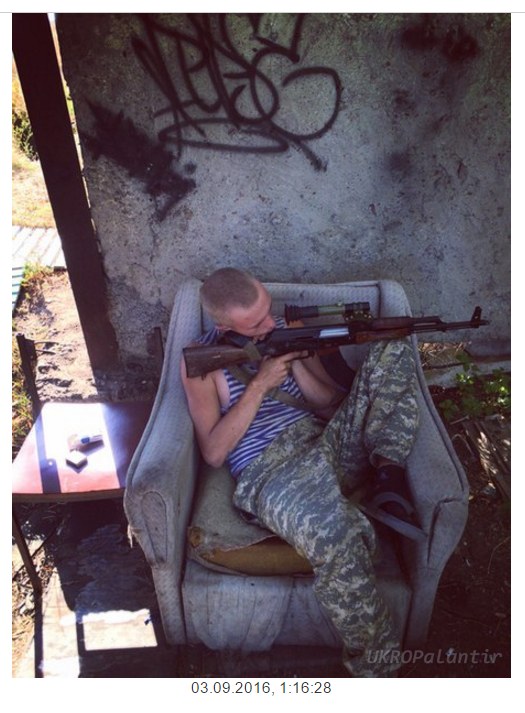 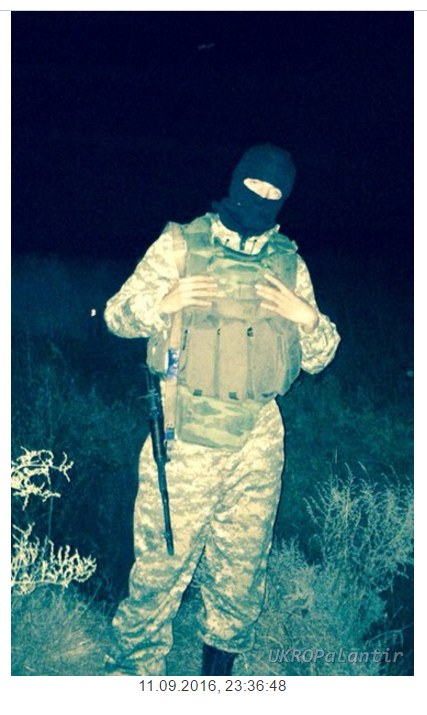 In the photo below, Mikhail Rusinov measures the depth of the Azov Sea near Alexandria Hotel that belongs to the Ilyich Iron and Steel Works and is located in the village of Bezimenne (47.101058, 37.934254). 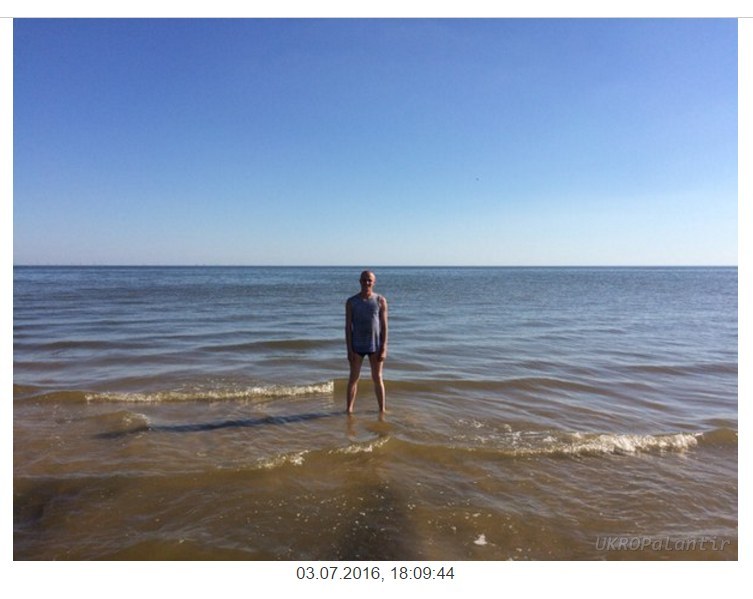 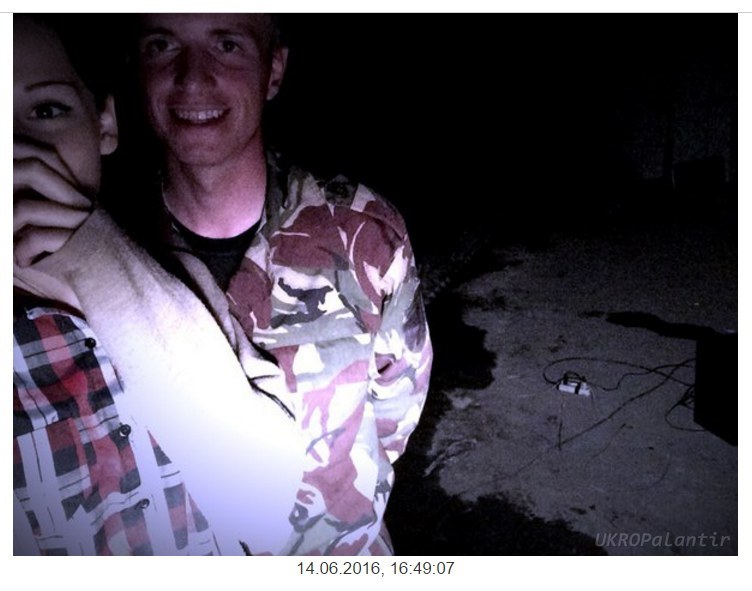 As we can see, servicemen from the 45th Special Purpose Brigade are present in Donbas. Don’t forget that the same unit directly participated in the annexation of Crimea in 2014. Now it conducts special reconnaissance operations in occupied parts of the Donbas.