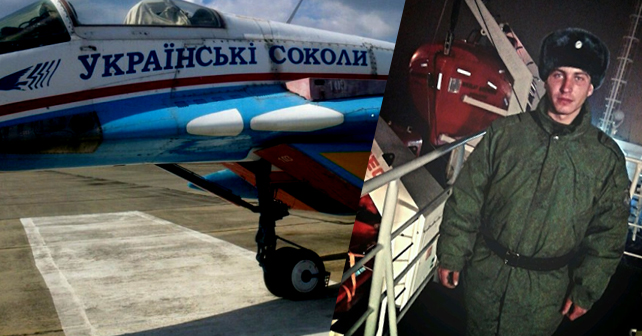 The military and political leaders of the Russian Federation since the start of the Russian-Ukrainian war, and subsequently the Syrian military campaign, have repeatedly tried, both unofficially and officially, to prohibit servicemen to post any military information on social networks. However, attempts by the Russian military to hide evidence of their crimes have largely failed and only emphasized the importance of information obtained through the open source intelligence (OSINT) method.

The 34th Motorized Rifle Brigade (MRB) of the Russian Armed Forces (military unit 01485, located in the stanitsa Storozhevaya-2, Karachay-Cherkessia, Russia) is no exception. Its servicemen, as well as servicemen of other Russian military units, love to post photos from those places where “they are not there” according to the Kremlin legend.

Kozlov Anton Valerievich Born April 29, 1993 in Apsheronsk, Krasnodar Territory of the Russian Federation, served in the 34th MRB of the Russian Armed Forces in 2013-2014. On March 10, 2014 Anton Kozlov writes a posting: “On a business trip!” To the question of his friends, where exactly he was on a “business trip”, and whether it was Crimea, he answers “this is a military secret”:

Anton Kozlov: On a business trip!

Sergey Uskov: Where is it?

Anton Kozlov: This is a military secret

Sergey Uskov: Not in Crimea by chance?

Sergey Uskov: Well, thank God. And is it for long? 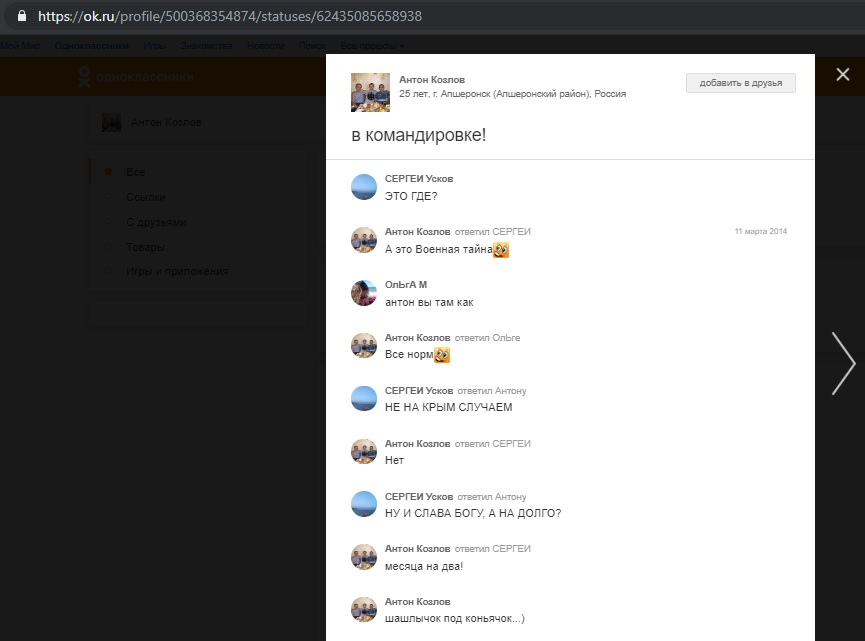 But on March 11, 2014, in the album of Anton Kozlov, we see a photo near the already familiar ferry in the port Kavkaz. 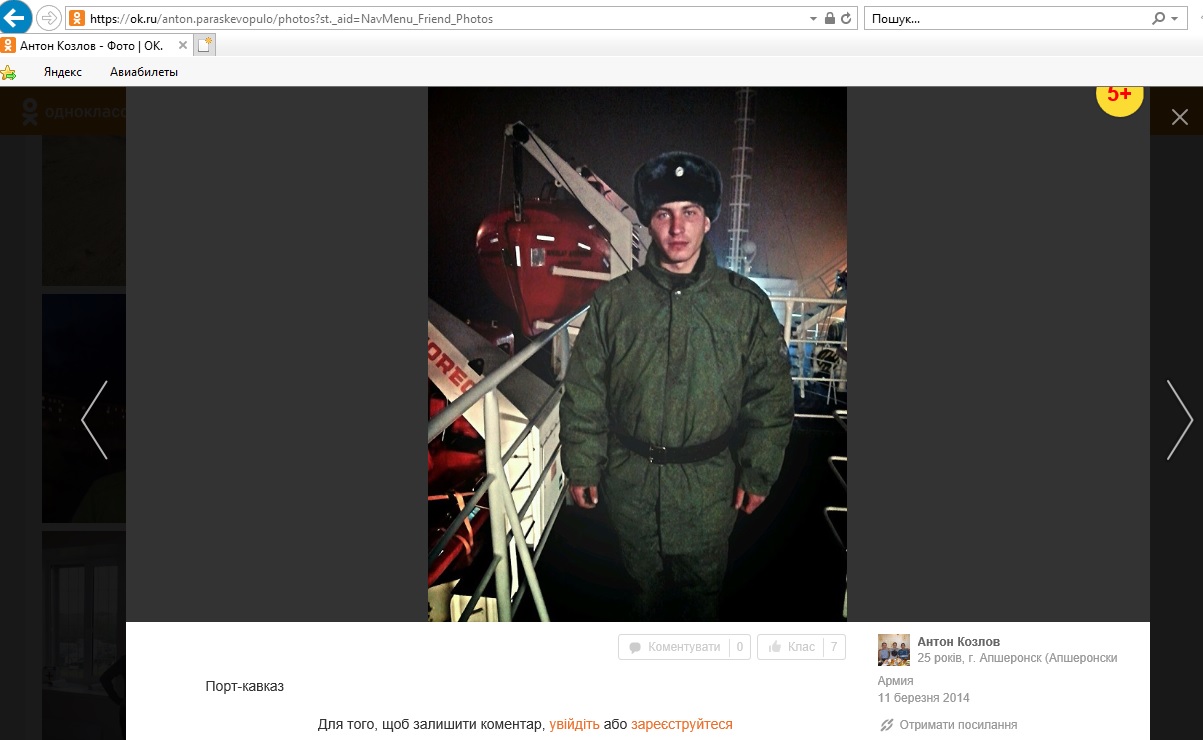 Then Kozlov began to post his photos taken in Crimea. Here is a Russian soldier in military uniform without insignia near the ruins of the fortress in Perekop; Kozlov posted the photo on social media on March 22, 2014. 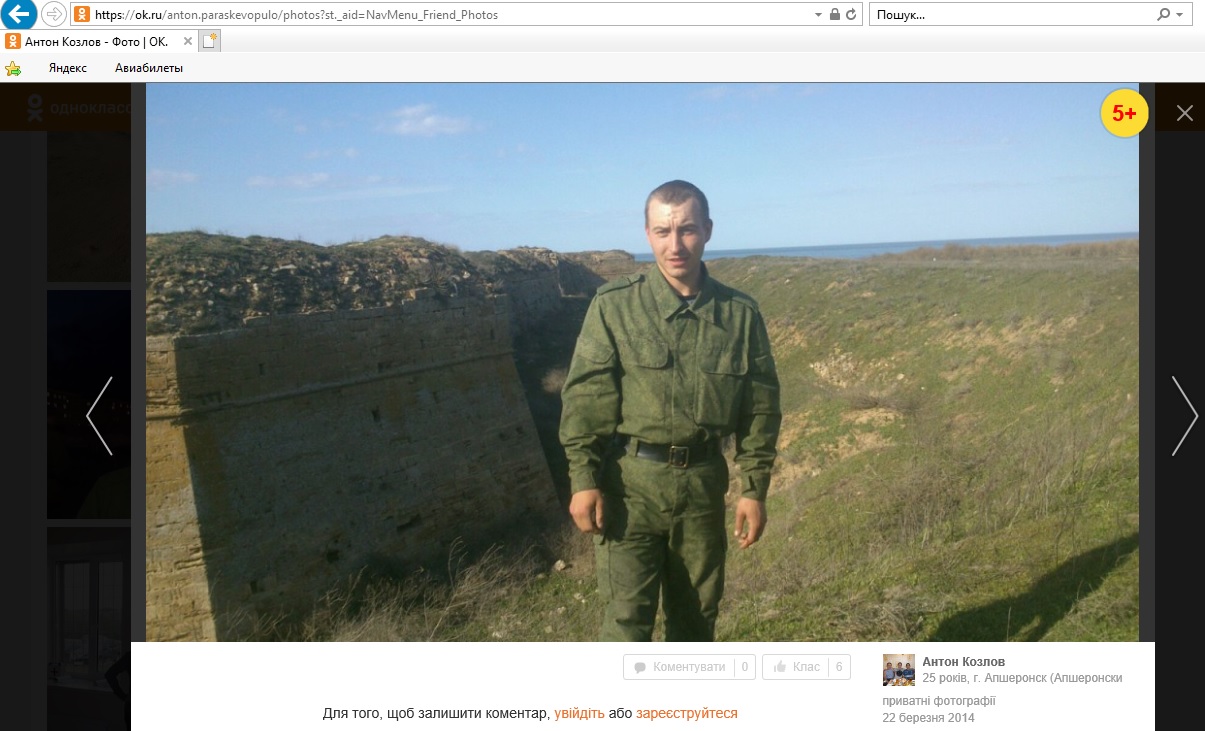 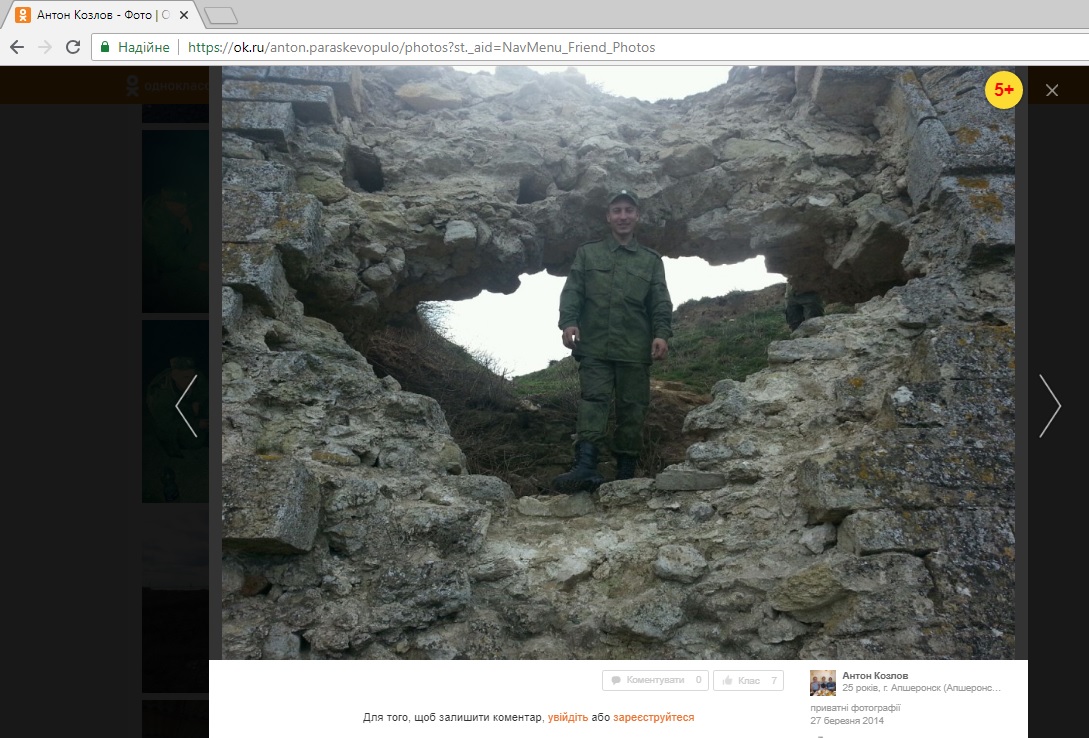 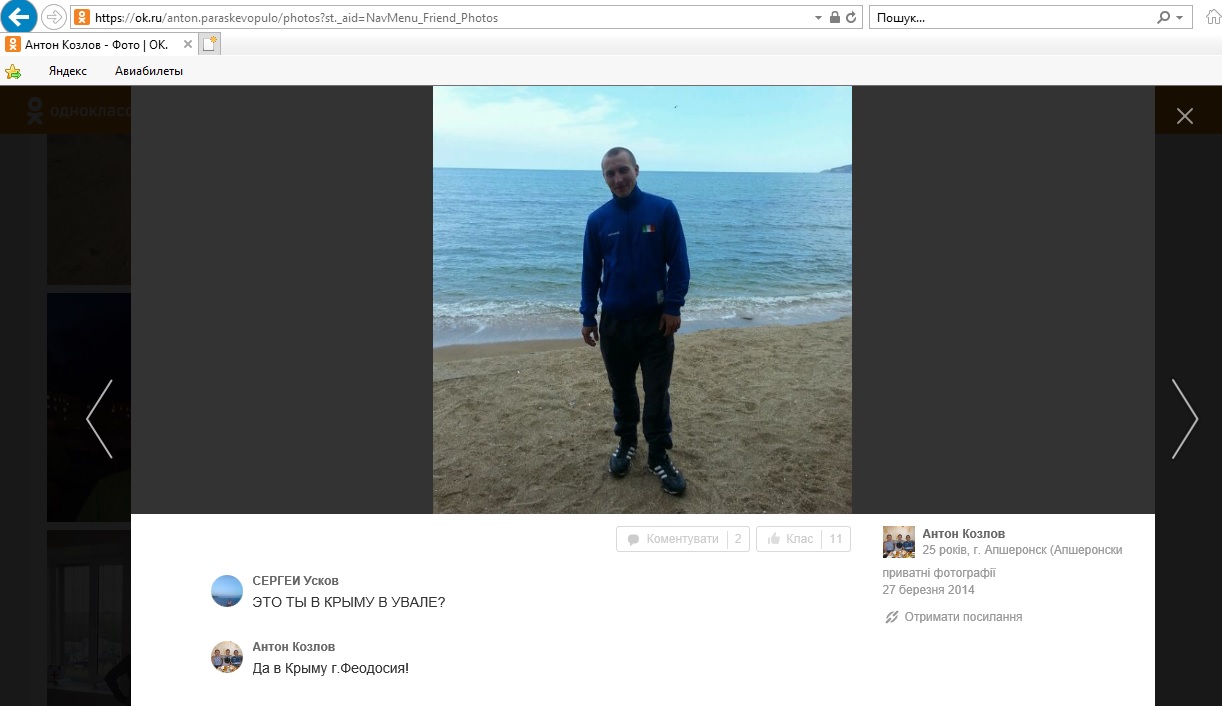 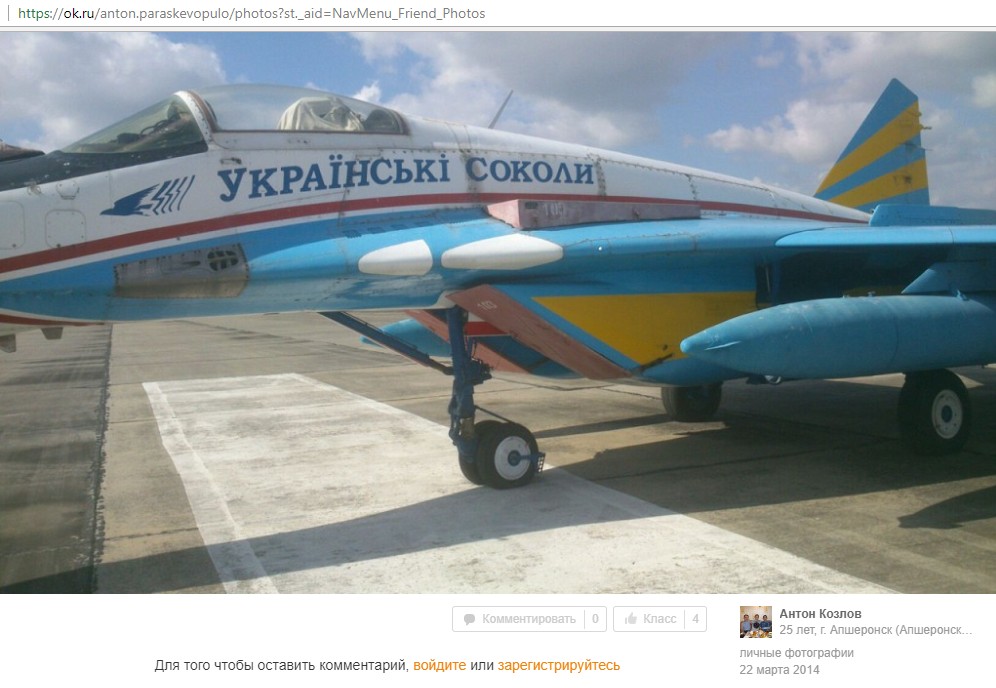 In Kozlov’s album we also found a photo of a Ukrainian MiG-29 aircraft with tail number 103.

It is known that in the spring of 2014, after the Russian troops captured the Kirovske airfield, MiG-29 planes were placed on the runway to block the airfield.

And in May 2014, all fighters from Kirovske, including seven planes of the Ukrainian Falcons aerobatics group (101-106, 108), were taken by truck to the Kulbakine airfield near Mykolayiv in mainland Ukraine.

In the group photograph A. Kozlov is in the center, with a medal for the occupation of Crimea. Kozlov removed the photo with the medal from his profile, but nothing disappears from the Internet without a trace. 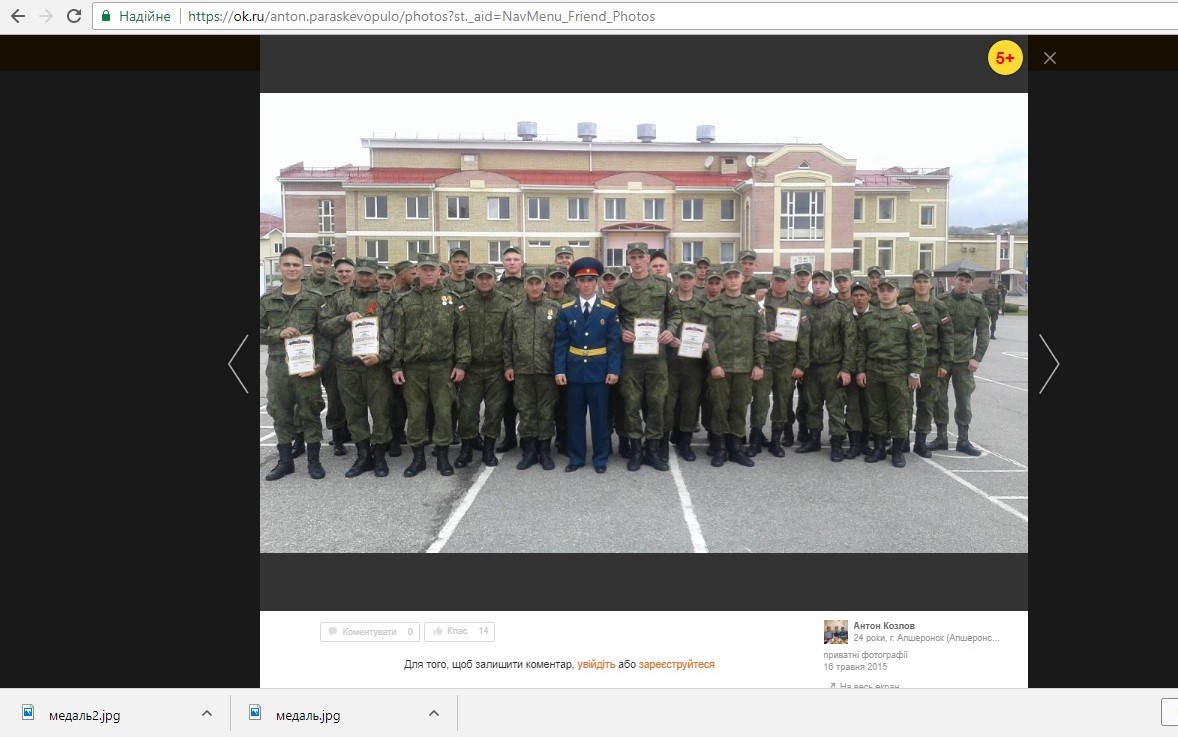 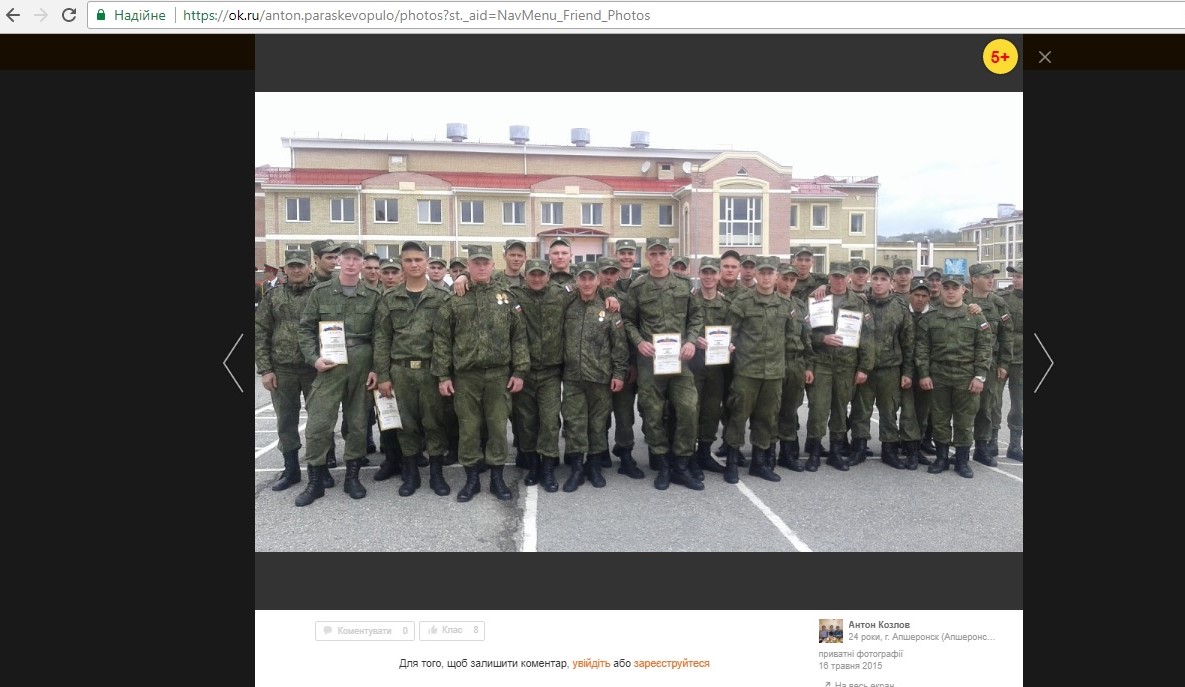 Near Kozlov, there is another medalist. This is Ilya Inin, he will be discussed further. 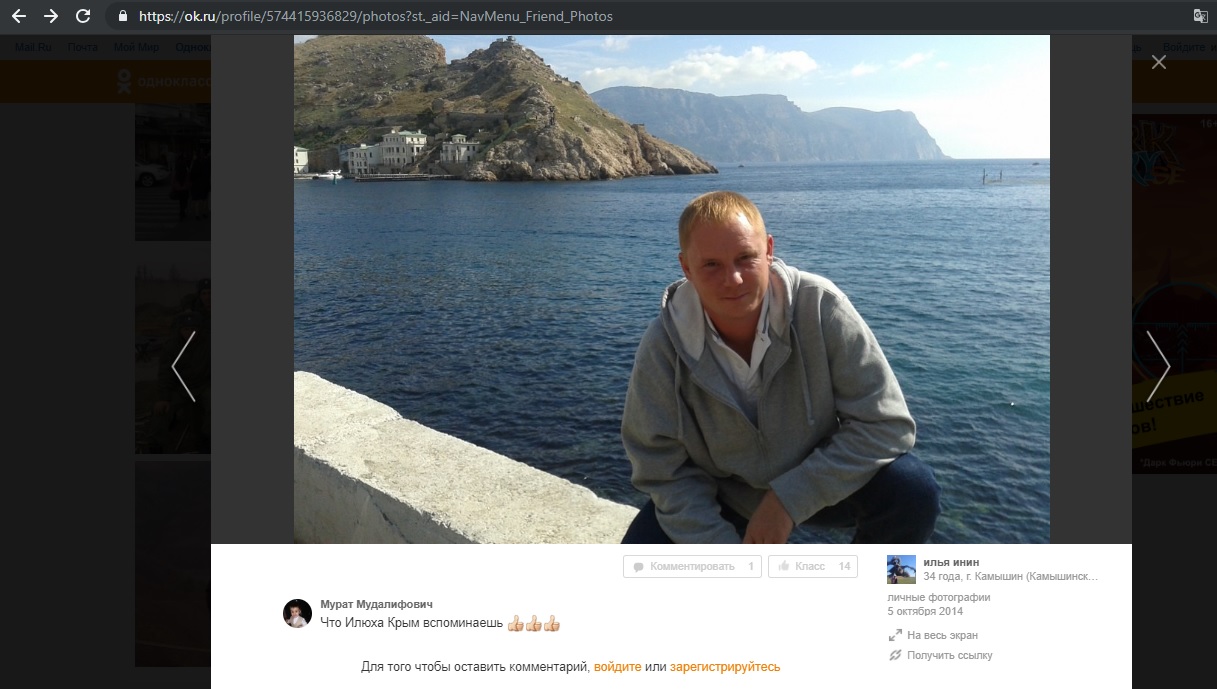 In March and April 2014, he wrote the following postings on OK social network: 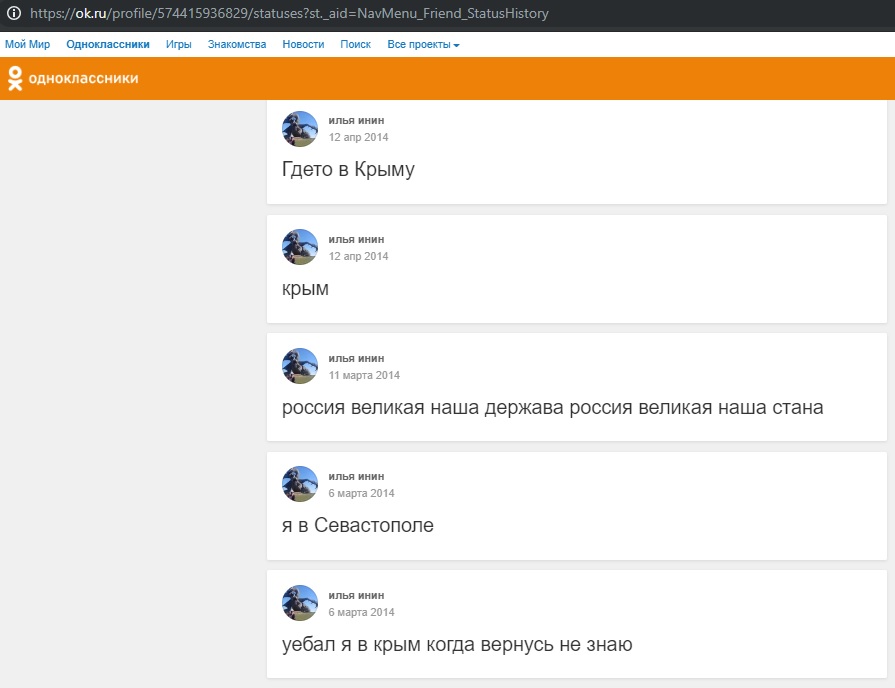 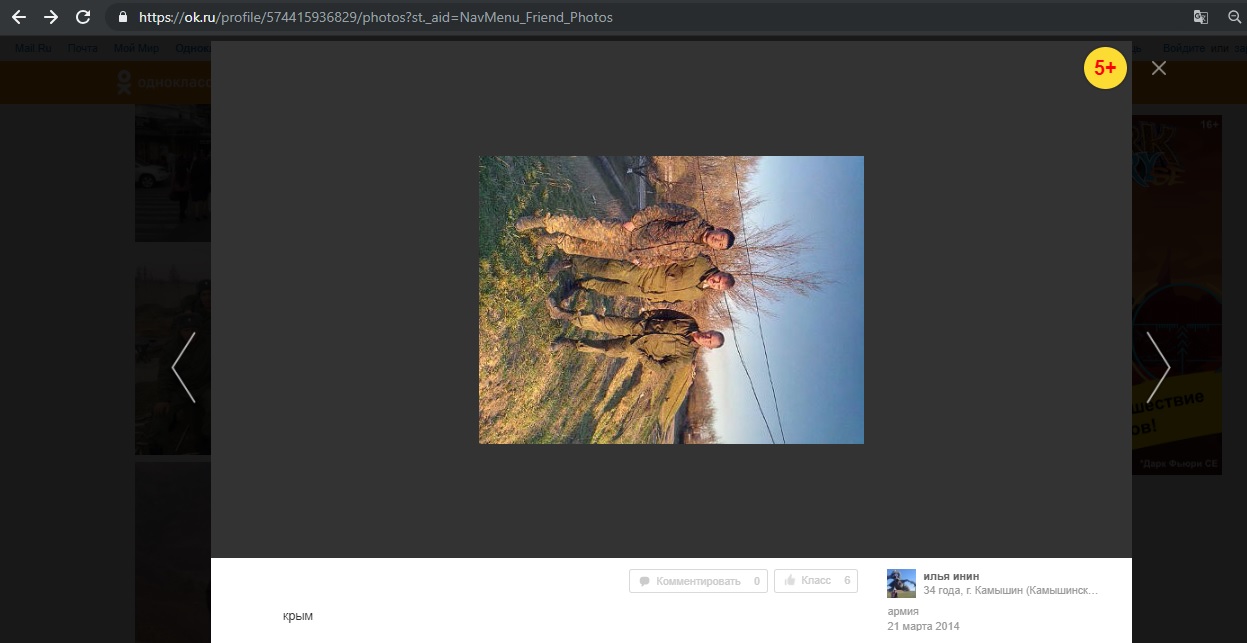 Inin was identified in group photographs with a medal for the occupation of Crimea in Kozlov’s album. The same photos were also posted in his album. 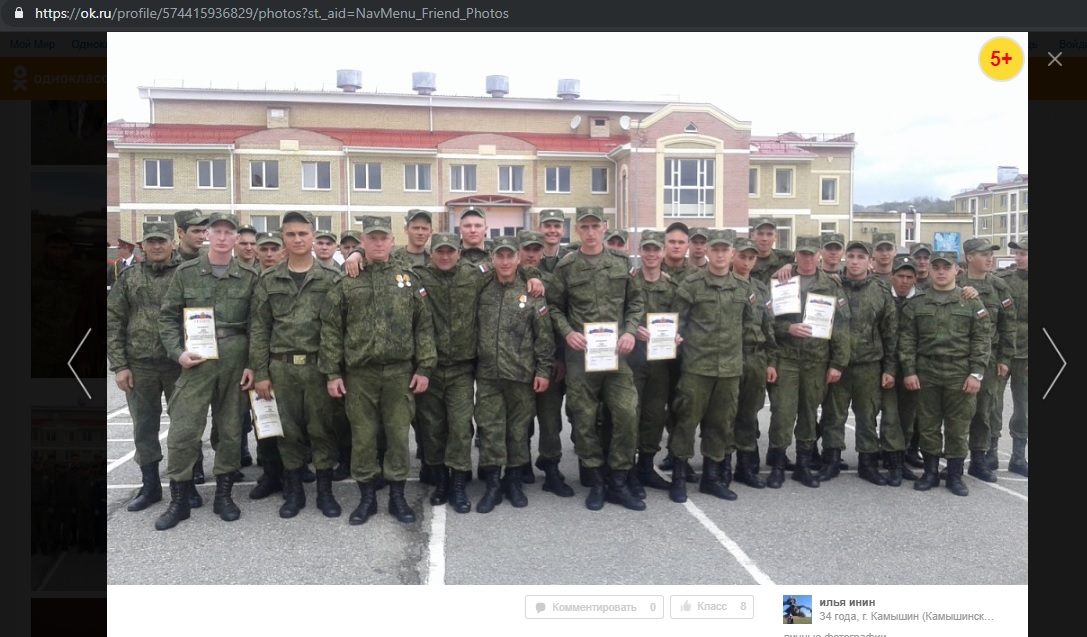 It is known that Russian servicemen took part in the annexation of Crimea in uniform without insignia as “green little men”, as well as in civilian clothes posing as “Crimean self-defense”. Probably the debut inspired Inin to try movie acting: 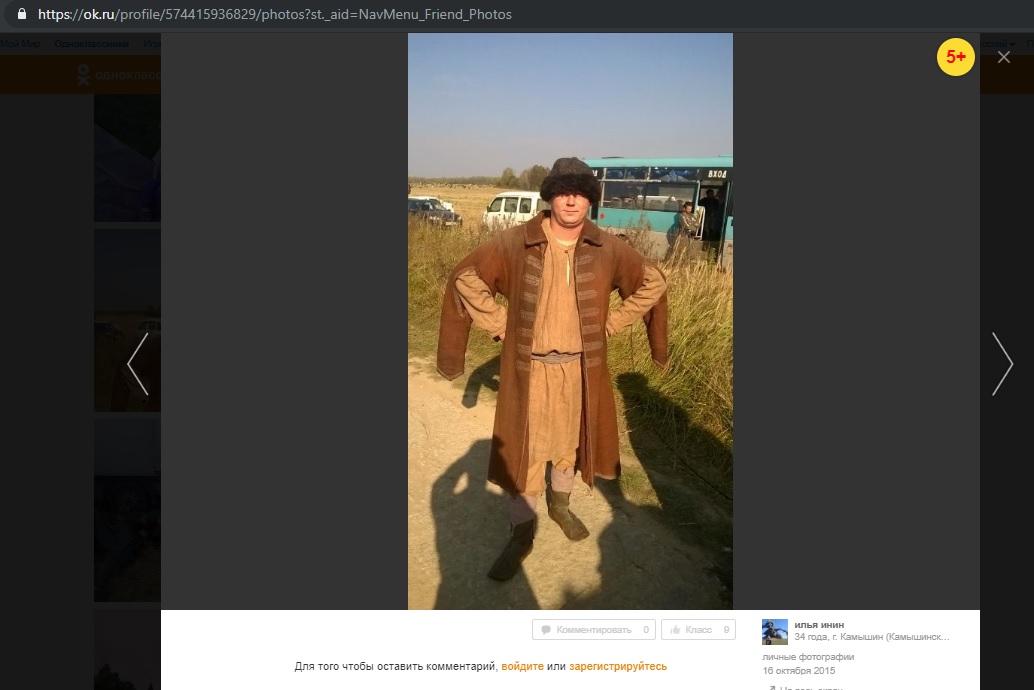 Normally a state secret is information relating to the state security, however for Russia this term largely means concealing information about the terrorist activities of the Russian Federation abroad. Recently, in the Russian Federation, the topic of restrictive measures for online presence of the military personnel has been raised almost every year. But to no avail. The desire of a Russian to boast of a war crime is irresistible.

Look up 34th MRB in the Russian Aggression interactive database.