Russian PSYOPS against Ukrainian soldiers of the 36th Marine Brigade 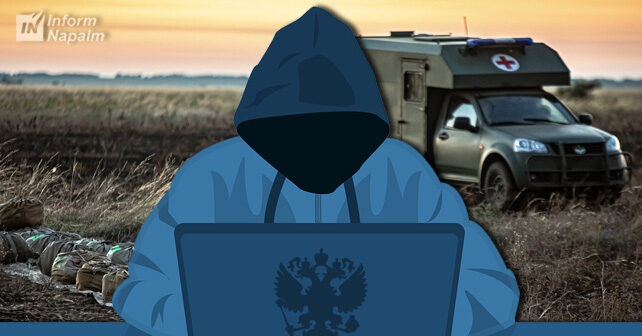 On September 10, Russia will begin the active phase of the large-scale military exercise Zapad-2021. At the same time, practical examples of the spread of Russian information attacks and psychological operations performed by Russian specialists are observed.

In this publication, InformNapalm volunteer intelligence community reveals the initial stage of one of these psychological operations (PSYOPS), with a special focus on Crimea.

Exercises in the south and Russian influence operations

In order to respond asymmetrically to Russia’s “demonstrations of force” on the Ukrainian southern border and to deter the potential attacker from entering the Kherson Oblast, Ukraine is also conducting military exercises and puts troops on heightened alert.

The plan is to regroup Ukrainian units into the Jahorlyk military training area near Skadovsk from September 9th to 30th. On September 6th, Kherson regional state administration published a report announcing that target exercises would be held there. On the same day, news of the planned maneuvers in Yahorlyk spread to Ukrainian media. And already the followingt day, InformNapalm’s volunteers, while monitoring Russian social media and telegram channels, observed the start of a Russian psychological operation.

At the same time, similar postings appeared on Russian blogs with minor changes, which also added that the outbreak was allegedly related to COVID-19, despite the fact that all Ukrainian soldiers had been vaccinated. In addition to rumors that the Ukrainian exercises would be interrupted, the propagandists also spread the suggestion that the vaccinations of the Ukrainian armed forces were ineffective. Emphasis was also placed on trying to convince the readership that Ukrainian command did not comment on the situation as it tried to hush up these facts. Spreading of conspiracy theories and anti-vaccination stories is a common and typical method of Russian propaganda.

The launch of the PSYOP

The approximate start of the PSYOP took place on September 7, 2021 at 4:30 p.m. – 5:30 p.m. The news story was spread according to a rather trivial Russian propaganda scheme, which usually goes like this: first, lesser-known Russian blogs spread false information. And gradually the story is picked up by specialized military Telegram channels connected to the Russian intelligence services.

At 5 p.m. the article was also published on the Russian propaganda website Russian Spring (archive).

Our long-term observations have shown that after an initial dissemination phase such disinformation is picked up by Russian secondary media to spread it further. And at the height of the operation, the story is covered by the leading Russian news media and discussed by experts on the Russian prime-time talk shows.

Identification and request for clarification

While monitoring Russian social networks and Telegram channels on September 7th at 5:17 pm, InformNapalm’s volunteers discovered this suspicious story. According to the team’s analysts, the information showed signs of a manipulation. The team then requested confirmation as to whether this information was correct or not.

The first request for clarification was sent to the 36th Marine Brigade, with screenshots attached showing the posts with the suspicious Russian news story. The brigade was asked to comment on its accuracy and provide reliable information on actual cases of illness. Pending a response from the 36th Brigade, a request was also sent to Hanna Maliar, Head of Strategic Communications and Information Policy at the Ukrainian Ministry of Defense.

Pending official answers, we notified other volunteer channels about the signs of the Russian operations. Analysts from the Return Alive organization also sent a request for clarification to those in charge of the 36th Marine Brigade. The reason was that if the information was false black propaganda, it could be neutralized by an official refutation in the first dissemination phase. And if the information was due to a leak, this could have been taken into account while locating foreign infiltrators. In addition to these channels, information on the signs of Russian PSYOP was also transmitted to the Center for Strategic Communication and Information Security at the Ministry of Culture and Information.

All of this communication and correspondence with departments and officials took no more than 30 minutes. Some reacted quickly, such as analysts from the Return Alive group, while others reacted more slowly. But in general, through a determined effort, answers were given fairly quickly.

The first official response from the 36th Marine Brigade

“All soldiers and officers are fine, healthy, and operationally ready, so it is strange to read about severe forms of pneumonia and critical illness. The information on these websites bears no relation to reality; likely it is manipulation of the enemy”.

At 19:03 there was also an answer from Hanna Maliar:

“These are enemy PSYOPS. We’ll strike back tomorrow; I will send you the link. Nothing is disrupted (military exercise ∙ editor’s note). Everything goes on as planned”.

With a sense of civic duty, InformNapalm’s volunteers thus postponed further monitoring until the next day with the hope that the authorities would localize the influence of the enemy.

The following post was published on September 7th at 7:44 pm on the popular Russian news platform Fishki.net (ranks 65th by visits in Russia). To add value to the text content, a photo has been added, which is also highlighted in the title. But there is no indication if that the picture showing Ukrainian soldiers with face masks, military ambulance vehicles and President Volodymyr Zelensky is illustrative. 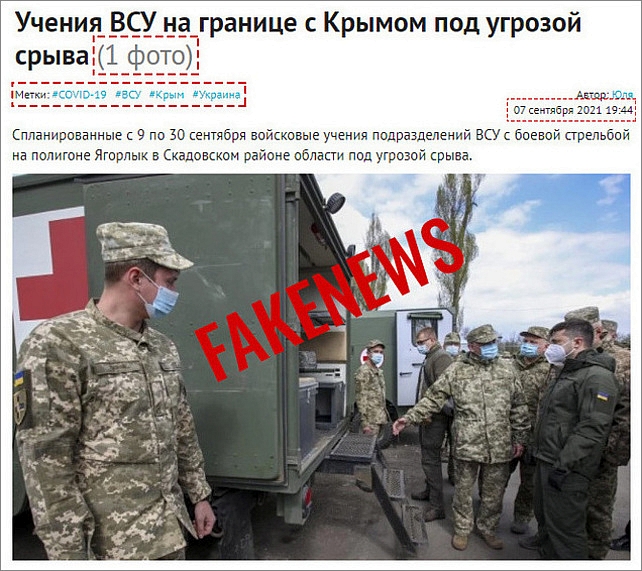 Obviously, this photo was meant to add drama to the prevalence of “the sickness” among the Ukrainian Marines. In fact, the photo has nothing to do with this message at all. The picture comes from a news publication from April 2020 showing President Zelensky visiting to the Alpine 128th Mechanized Infantry Brigade in Lower Carpathians. 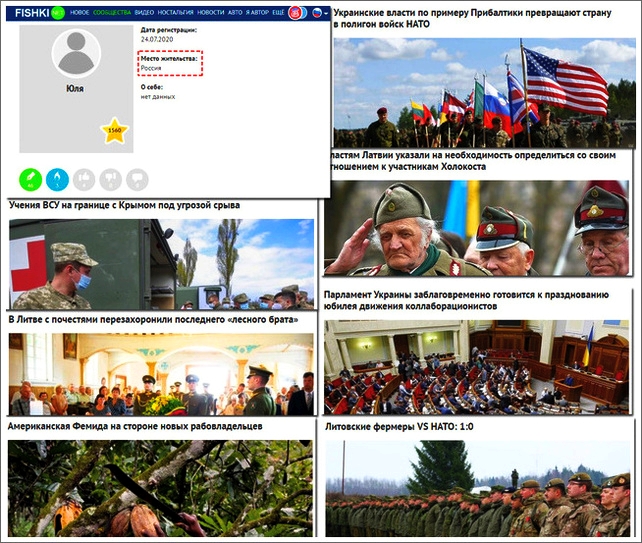 A post that contains the components of a PSYOP

Photo: A post that contains the elements of a PSYOP against Ukraine, Lithuania, Latvia and the USA.

It is interesting that the author of the article nicknamed as “Julia” on Fishki.net has a typical account with minimal information that was registered a year ago. The profile contains 47 publications showing elements of PSYOPS against Ukraine, Lithuania, Latvia and the USA.

The following headlines received attention, among other things:

This fact fully confirms the assumption that the fake news observed is part of a broader influence operation that is constantly evolving. Even successful Ukrainian military exercises without adequate information support can be discredited by the hostile propaganda machine, which does not shy from spreading false information to raise doubts, sow hopelessness and uncertainty among selected target groups.

Continuation of the Russian PSYOP

InformNapalm’s volunteers do not have any software to estimate the exact reach and number of messages currently being distributed per hour. However, some keywords on search engines indicate that this Russian operation is actively gaining momentum.

The importance of communication between volunteers and officials

The above example shows the importance of improving communication between volunteers and officials for a quick response to Russian influence operations in the first phase. Press services and authorities responsible for combating influence operations are not prepared to fend off such attacks.

Their work is obviously hampered by hierarchical decision-making mechanisms, whereas a lack of trust and knowledge does not allow for full use of the potential of volunteers. As a result, valuable time is lost and the existing civil society potential is wasted. The speed of reaction is important for a successful localization and neutralization of PSYOPS.

It is more difficult to counteract disinformation after a mass spread. Therefore, it is more effective to preempt disinformation in the early stages. A successful example is Lithuania and the communication and action of the State Border Guard Service, which prevented or stopped several PSYOPS along the border between Lithuania and Belarus in August 2021.

InformNapalm has extensive experience in detecting and combating Russian PSYOPS

InformNapalm has extensive experience in detecting and combating Russian influence operations and is ready to assist government organizations by providing information on how these can be identified.

In conclusion, we believe that our colleagues in the public sector are ready to do the same. In order to create effective collaboration, it is necessary to create a functioning communication channel around the clock. In addition, it is important to establish mutual communication and to exchange experiences, to prevent possible crisis situations and to react to them. Equally important is the development of algorithms that make it possible to react quickly to typically Russian psychological operations.

Translated by A55.  Distribution and reprint with reference to the source is welcome! (Creative Commons — Attribution 4.0 International — CC BY 4.0) InformNapalm social media pages: