The Molotov-Ribbentrop Pact. The Stalinist Soviet Union is as guilty of starting World War II as Nazi Germany 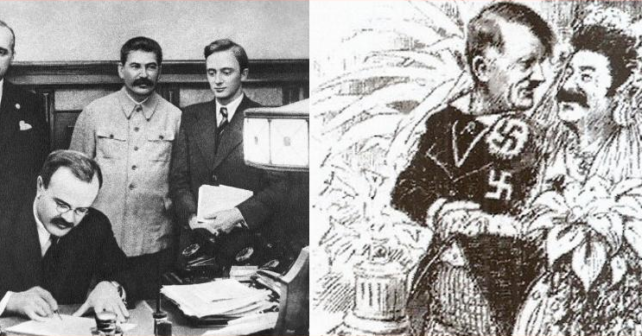 Article prepared by Info Ops Polska Foundation. Info OPS Polska Foundation was established for the implementation of projects aimed at ensuring the safety of the information environment. The project includes support for the development of the capacity to identify information and psychological operations, including conducting analyses of manipulation processes of the Polish-speaking information environment: disinformation, propaganda, social engineering and cyber activities.

The Versailles system united the countries defeated in the World War I against each other. It was due to a striking difference of views between particular great powers. The most aggressive policy was pursued in the 1930s by the Third Reich and the USSR. In 1936, Germany remilitarized the Rhineland. In 1938, it carried out the so-called Anschluss (inclusion) of Austria and annexed the country without a voice of opposition from other capitals. In the same year, Germany made claims to the Sudetenland in Czechoslovakia populated by Germans. The action was followed by the so-called Czechoslovak crisis – Germany threatened Czechoslovakia with war in case the latter did not accept the former’s claims. A conference was held in Munich for this purpose, with the participation of the leaders of Germany, Italy, France and the United Kingdom.The last two powers, fearing the start of a new war, agreed to German demands. The conference was held without the participation of the most interested party – Czechoslovakia. In 1938, Germany occupied a part of Czechoslovakia, then in March 1939, it liquidated the country, creating the Protectorate of Bohemia and Moravia and the Germany-dependent Slovak state. Such policy would not have been possible without the concessions of France and Great Britain who were too afraid of a new armed conflict that would spread across the whole of Europe.

The non-aggression agreements concluded by Poland at the beginning of the 1930s – with Germany (1934) and the USSR (1932) – seemed to provide the country with certain guarantees of the minimum of stability. The one signed with Germany was particularly significant. At present, this step is still sometimes placed in a false light. Between 1934 and 1939, Poland consistently rejected the repeated offers of Polish-German cooperation against the USSR made by the Third Reich leaders. Accusations of concluding an alleged secret agreement with the Third Reich, thrown by Stalin at the Polish authorities, never had anything to do with reality. Nor do they find any justification in historical knowledge. As long as there was an independent Polish state, it was impossible for Germany to attack Russia. As a consequence of rejecting the German proposal by Poland, Hitler had to enter in an agreement with Stalin.

On May 3, 1939, Stalin dismissed Maksim Litvinov from the post of the Commissioner for Foreign Affairs, and replaced him with Vyacheslav Molotov, his trusted comrade who had long been a supporter of an agreement with Germany, whereas Litvinov had opted for a possible alliance with Great Britain and France. Stalin and Molotov did not intend to enter into agreements with Western democracies and, as a consequence, take on the main role in the fight against the Third Reich. On August 21, Stalin gave his approval to the arrival of Ribbentrop to Moscow, yet he made it clear that the non-aggression treaty would be concluded only on condition of signing an additional agreement defining the interests of both parties in foreign policy matters. On August 22, 1939, it was announced that the government of the Third Reich and the Soviet authorities had reached an agreement on signing a non-aggression pact. The German minister arrived in the capital of the USSR at noon the following day. The pact was signed on August 23, 1939, in Moscow by Joachim von Ribbentrop and Vyacheslav Molotov who on behalf of their leaders – Adolf Hitler and Joseph Stalin respectively – divided the territories of Central and Eastern Europe. The publicly available agreement contained seven articles. It was a non-aggression pact whose secret protocol laid down the terms of the division of Central and Eastern Europe between Germany and the Soviet Union. In this way Hitler secured the upcoming attack on Poland and the eastern front, while Stalin enlarged the sphere of influence of communism.

The first point of the pact stipulates that: „In case of territorial and political transformations in the Baltic States (Finland, Estonia, Latvia and Lithuania), the northern border of Lithuania will be at the same time the border between the interest zones of Germany and the USSR. Therefore, both parties recognise Lithuania’s interest in the Vilnius region.”

The second point, directly related to Poland, read as follows: „In case of territorial and political transformations in the areas belonging to the Polish State, the border between the interest zones of Germany and the USSR will run approximately along the rivers Narew, Vistula and San. The question of whether it is in mutual interest to maintain an independent Polish State as well as what the borders of that State will be can only be finally clarified in the course of further political events. In any case, both governments will resolve this issue with a friendly agreement.”

Further point related to the area of South-Eastern Europe. The Soviets highlighted their interest in Romania’s Bessarabia, while the Germans expressed no interest whatsoever in this area.

The last point of the document stated: „This Protocol shall be treated as strictly confidential by both Parties.”

The conclusion of the Molotov-Ribbentrop Pact at the end of August 1939 between the Third Reich and the Soviet Union marked the end of peace and the beginning of war. By dividing their spheres of influence in Europe, both countries jointly started the war. With the German claims to Poland and the incorporation of Gdansk into the Third Reich, the policy of appeasement ceased to exist. Peace which had been prolonged since mid 1930s transformed  on September 1, 1939, into the Polish-German war which then became World War II. On September 17, 1939, Soviet Russia carried out a military attack on Poland, violating the previously signed non-aggression pact and joining the German attack.

The symbol of this alliance has since been the joint German-Russian parade of the Wehrmacht and the Red Army on September 22, 1939, in the city of Brest-Litovsk captured by the Germans. Between 1939 and 1941, the NKVD together with the Gestapo fought against the Polish resistance movement – the principles of this cooperation were established during a series of conferences that were held in the same period the following locations: Brest-Litovsk, Przemyśl, Zakopane and Cracow. The cooperation included the exchange of information between the USSR and the Third Reich on the Polish conspiracy. Actions were also taken to eliminate the Polish leadership elite and intellectuals. Germany and the USSR also took actions to denationalise Poles in order to deprive them of their national identity and incorporate the population of Polish nationality into the nations of both countries within the framework of Germanisation or Russification.

In addition, 1939-1941 was a period of a close economic cooperation between Germany and the USSR. Until June 1941, the USSR provided Germany with considerable military and economic assistance. Stalin concluded two trade agreements with Hitler – in 1939 and 1940. The goods and commodities delivered by the USSR to Germany included 1.6 million tons of grain, 900 thousand tons of oil, 500 thousand tons of iron ore, as well as manganese, chromium, cotton, phosphate, soya, rubber and platinum. These supplies allowed Germany to continue the war and take over Europe.

The German-Soviet system determined the outbreak of the war, which meant no less than next partition of Polish territories. The most important part of the agreement between the two totalitarian states was the secret protocol defining the division of Central and Eastern Europe into German and Soviet spheres of influence. That collusion constituted the prelude to a genocidal policy pursued in the name of two criminal ideas – nazism and communism. The Stalinist Soviet Union is as guilty for starting World War II as Nazi Germany.

No Responses to “The Molotov-Ribbentrop Pact. The Stalinist Soviet Union is as guilty of starting World War II as Nazi Germany”