Russian military UAV shot down in the war zone (Updated) 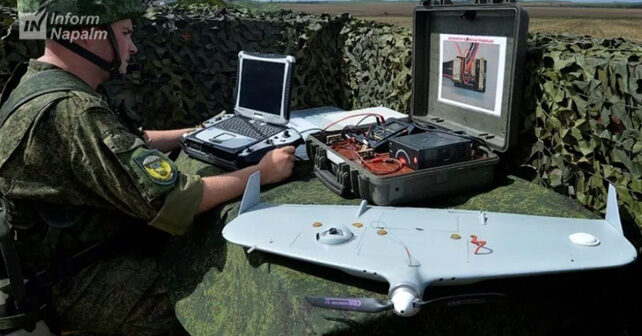 A Russian military unmanned aerial vehicle (UAV) Granat-1, which is part of the new Russian artillery reconnaissance system Navodchik-2, was shot down on November 29, 2020 over the zone of the Joint Forces Operation (JFO) in Donbas. This was reported on the JFO’s official Facebook page with a photo of the downed UAV. 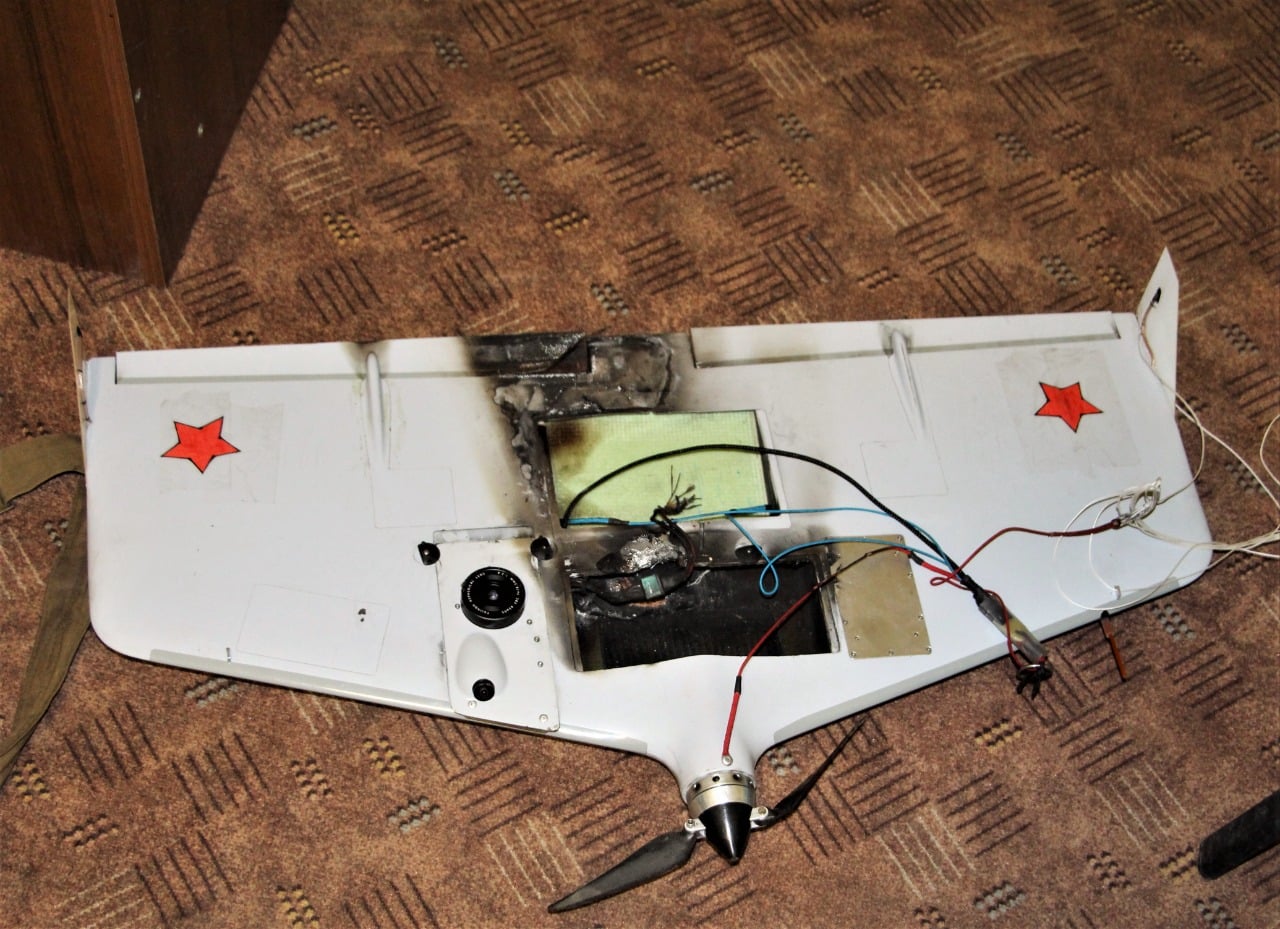 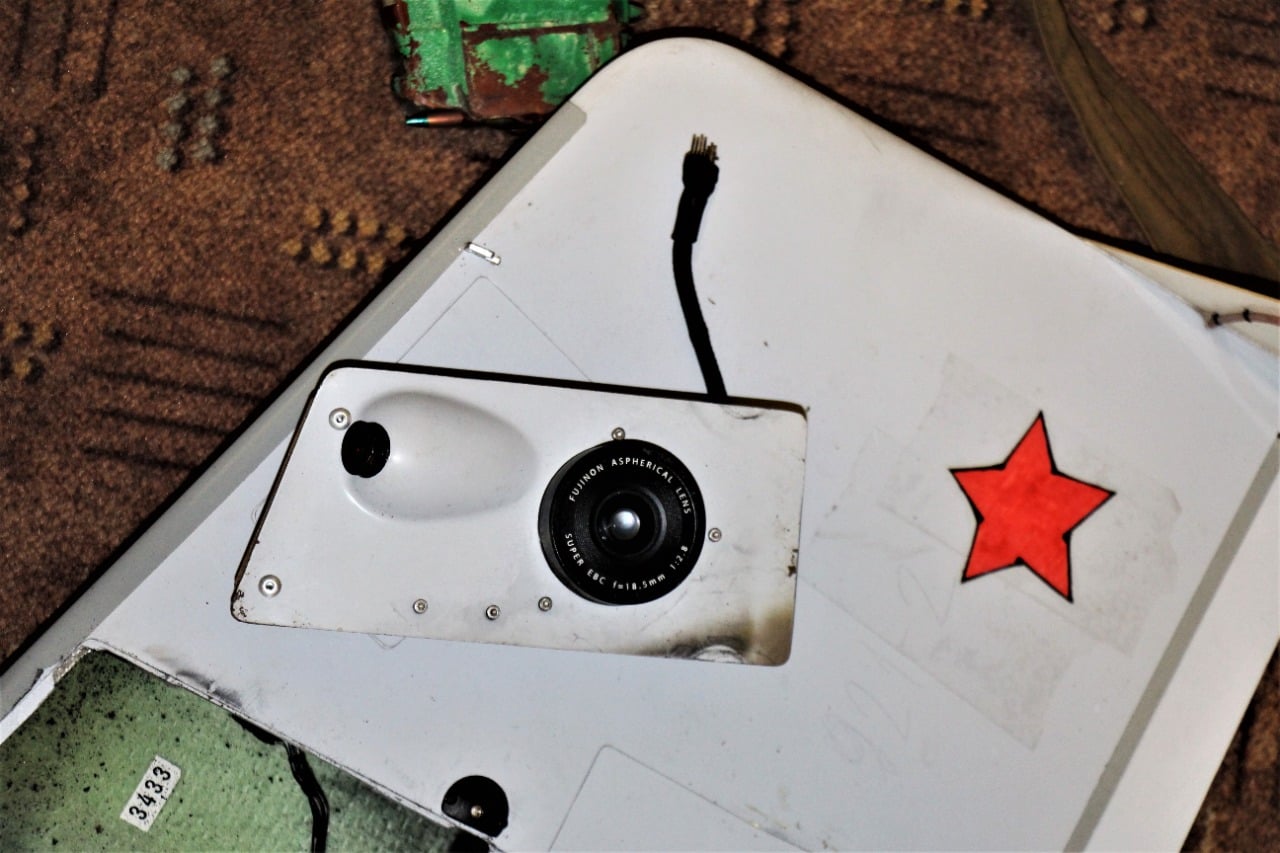 Video footage from the downed UAV

On November 19, 2020, InformNapalm volunteer intelligence community published exclusive images and additional facts about the ground control station of the newest Russian Navodchik-2 system, which featured for the first time in the official reports of the OSCE Special Monitoring Mission (SMM) on November 14, 2020. The system was spotted in the Luhansk Oblast, 12 km from the line of contact, approximate coordinates: 48°31’40.2″N 39°24’01.6″E. 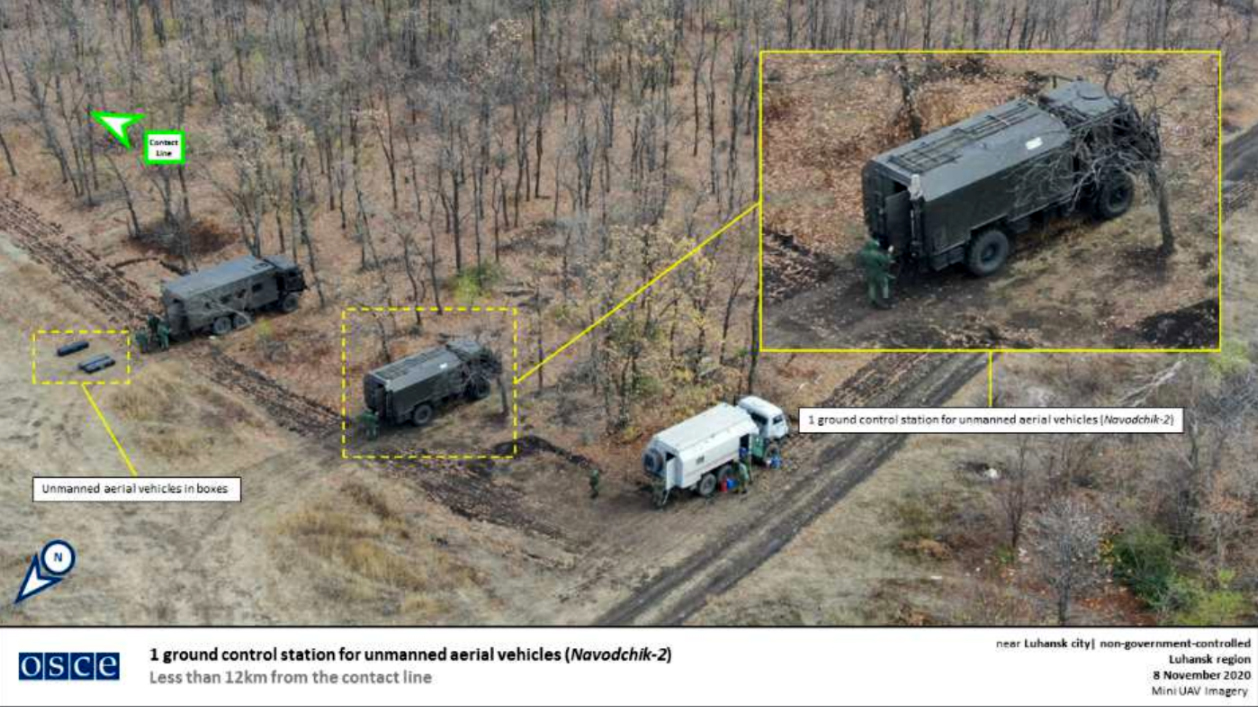 Back in 2015, InformNapalm established the use of the Granat-1 and Granat-2 UAVs by the units of the Russian occupation forces in the Donbas. The use of these types of Russian military UAVs was detected in a propaganda video story of the Novorossia.TV channel. It is known that the Russian Army used these UAVs during the hostilities near Debaltseve in February 2015. 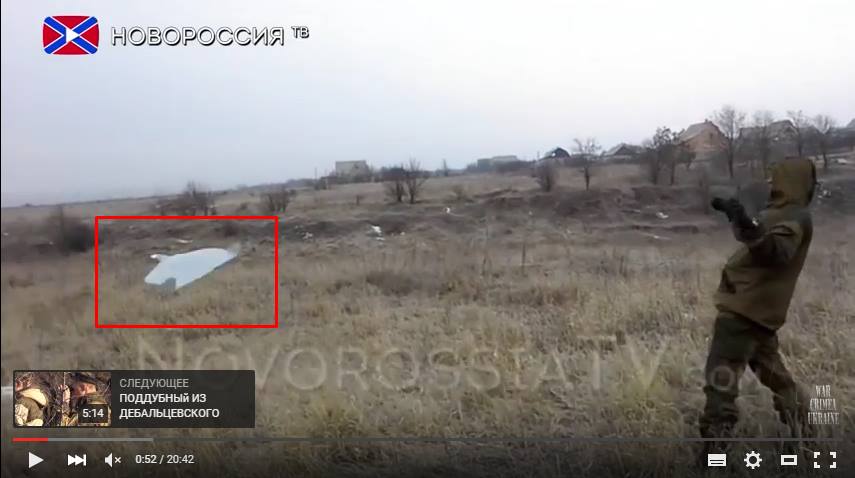 According to official data, on April 2, 2017, a Russian Granat-1 UAV was shot down and retrieved in the area of the Svitlodarsk bulge. Parts of the device bore markings of the FSB of the Russian Federation.

Granat-1 is a Russian short-range flying-wing UAV, with a range of up to 10 km. It is designed to conduct aerial reconnaissance and provide targeting coordinates for firepower assets. The payload includes a digital camera and a rotary video module with a color video camera. Launch method: hand launching. Capable of making photo, video and thermal footage. Data is transmitted via a digital radio link. The UAV is part of the modern Russian system Navodchik-2.

It is worth mentioning that various modern Russian UAV and EW systems often fall into the focus of OSINT investigations by the InformNapalm volunteer intelligence community and feature on the OSCE SMM reports from Donbas. They constitute direct and irrefutable evidence of the Russian military aggression against Ukraine. As of 2020, there are established facts of the deployment in the Donbas of a number of different types of Russian military UAVs, in particular Granat-1, Granat-2, Granat-4, Forpost, Orlan-10, Eleron -3SV, Takhion and Zastava.

Three militants of the hybrid Russian occupation forces who were captured by the UAV’s video camera before its launch could be identified with a high degree of probability. 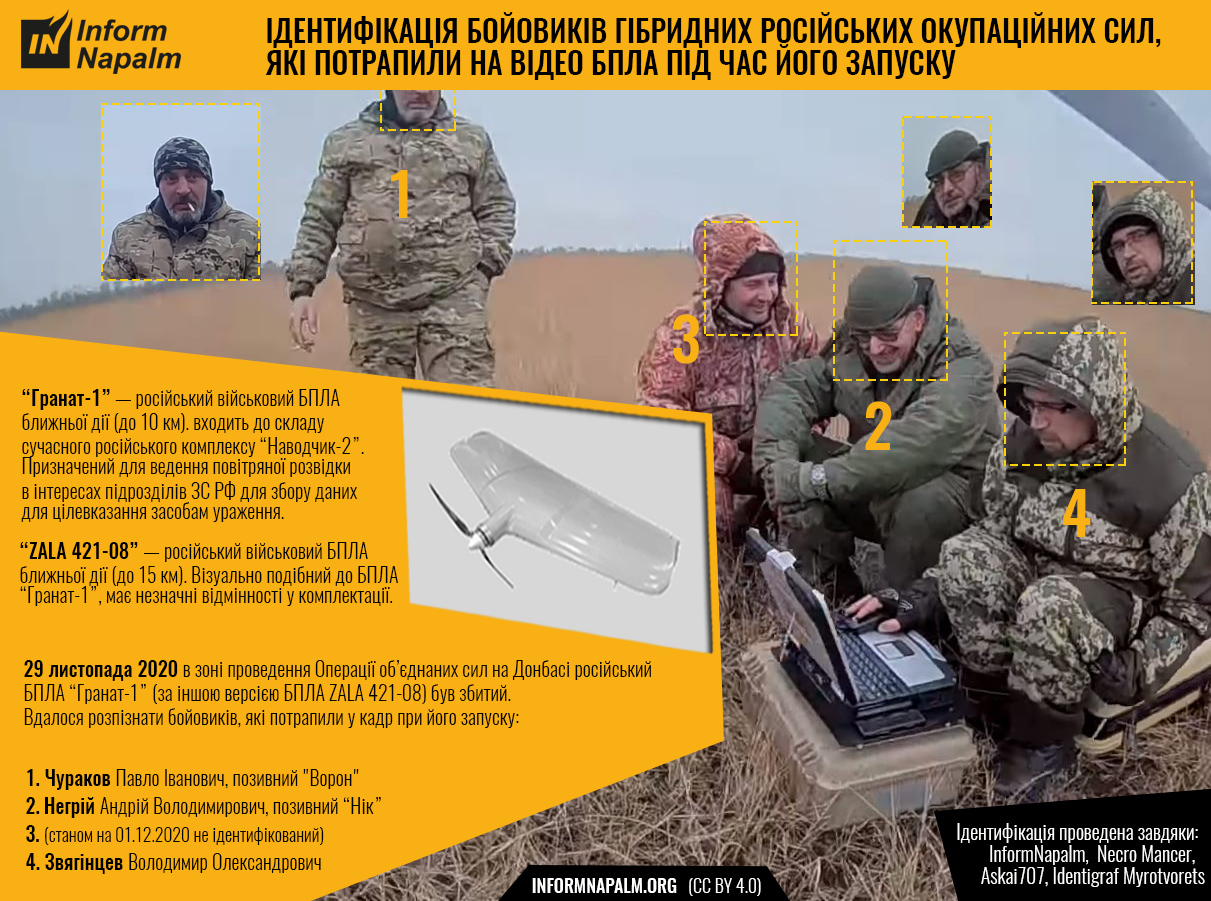 They are listed in the database of the Myrotvorets Center as local collaborators of the Russian occupation forces in the Donbas, members of illegal armed formations engaged in aerial reconnaissance.

The composition of the group consisting of the local mercenaries explains why the UAV which was shot down on November 29, 2020 in the JFO zone had red stars on it. Militants usually have a lower level of military discipline than the personnel of the Russian Army and sometimes modify their equipment applying Soviet symbols to it.

Militants were identified with the help of OSINT investigator @Necro Mancer and the use of the Identigraf automated face recognition software of the Myrotvorets Center.

OSINT investigator @askai707 also drew our attention to certain technical features in the design of the downed UAV suggesting that this is a modification of the modern Russian military UAV ZALA 421-08, which differs from the Granat-1 modification, but is similar to it in terms performance and specification.

Also, the second removable camera from the ZALA 421-08 kit was captured in the video.

Let us recall that another Russian ZALA 421-08 was shot down by the Ukrainian military on June 29, 2014 near the village of Biryukove, Luhansk Oblast, 4 km away from the border with the Russian Federation.