The Karabakh Knot: Which one is stronger – Turkey or Russia? 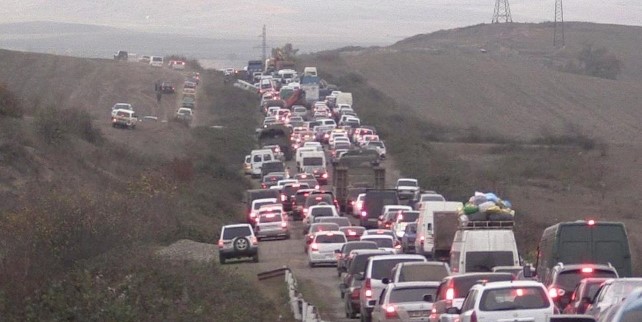 The author, Andrius Kubilius, is a Member of the European Parliament and the Standing Rapporteur on Russia by the decision of the EP.

The Gordian Knot is a famous concept worldwide, as Alexander the Great cut it with his sword.

Meanwhile, the Karabakh Knot, causing wars since the 18th century of our era, can be found in the South Caucasus. Also, the issues are attempted to be solve with the help of sword only for quite a while. Armenians did it back in 1992 and Azeris are trying to repeat the same thing now.

We heard some news which had been already known: Aliyev, the President of Azerbaijan, announced that Armenia surrendered in the 2nd Karabakh war. Baku is happy. However, Yerevan is angry and sad as well as about to destroy the Government of Pashinyan since he lost the war. Also, Russia has just entered with its so-called peace makers whereas Turkey congratulated Azerbaijan.

I know that this question is particularly sensitive when it comes to both Armenians and Azeris. I cannot judge which side has been right since 1992. Back in 1994, Armenians used their guns to expel Azeris not only from Nagorno-Karabakh but also from 7 districts around. With the help from Russia, the status quo has been the only option for all this time until now, meaning that no sustainable and long-term peace solution has existed. On the other hand, Azeris have felt humiliated and been seeking revenge for nearly 3 decades. It has been recently achieved with the support from Turkey.  There were no international peace initiatives; the attempts of the OSCE and the Minsk Group have not delivered any fruitful results either during 26 years. The EU has been a passive spectator of this smouldering conflict all the time. What is more, as the smouldering fire turned into a tragic volcano recently, Brussels remained ignorant.

Although Azeris are currently celebrating while Armenians keep mourning, there is much food for thought regarding both sides. What is the future of this South Caucasian region? There is a decent chance to become the new Middle East, where ethnic conflicts and wars will become a permanent thing. As a result, the whole region will fall behind. Moreover, even the conflict nowadays has shown that it is not only the deal amongst Armenia and Azerbaijan, but also the arena for Russia and Turkey to demonstrate their power and conquer. Both sides of the Karabakh Knot are slowly becoming only tools and victims of this game, conducted by the larger ones.

Russia is enforced to recognize the power of Turkey

Some may claim that Russia is the main winner of this conflict as this side gained the right to bring in the so-called peacekeepers and guards in the territories of both Azerbaijan and Armenia. Additionally, some thoughts about Putin taking vengeance on Pashinyan, the leader of the velvet revolution, are being heard. However, the contrasting conclusion is arising while digging deeper in this situation. This war of Nagorno-Karabakh is one more conflict of modern days, where Russia should agree with the superiority of Turkey. In other words, Armenia, which relied on security guarantees and military technology from Russia, had to admit the advantage of Azerbaijan, which collaborated with Turkey and Israel.

It was the 3rd case this year when Turkey has demonstrated its superiority in military and technology. The first case took place in the context of the war in Syria, as Turks warned Russia to refrain from attacking Idlib. Since Russians did not obey, Turkey harshly attacked them with drones. Later on, the same lesson followed up in Libya, where the drones of Turkey determined the advantage of the UN-recognized Libyan government. The side, supported by Turkey, survived although the other side was backed by Emmanuel Macron and the mercenaries of Wagner.

No wonder that Volodymyr Zelensky, the President of Ukraine, signed the treaty of military collaboration with Erdogan in Turkey a month ago. Kiev is well-aware of the partners which should be selected in order to endure the aggression of Russia.

Smart political leadership instead of swords

Any attempt to solve the Karabakh Knot has not been successful so far. If one side had scored a temporary victory with the help of its great neighbour, another side would be looking for other great neighbours with larger swords. The revenge would come up in a few decades then.

Differently from the situation experienced by Alexander the Great, the Karabakh Knot requires common sense, wisdom and strong political leadership. The ability of leaders to make smart geopolitical decisions is important too.

Russia proved that it could not be a reliable partner. Turkey, even demonstrating that the Kremlin can be stopped, does not behave wisely because of triggering the conflict in its own neighbourhood.

The EU should take up the stronger approach towards leadership while offering the help to both Armenia and Azerbaijan. It should entail a long-term peace deal and a fast-track development plan. However, Brussels has provided only the offer of ‘strategic autonomy’ so far; also, they still harshly criticize the US regarding successful peace deals between Israel and the Arabs or Serbia and Kosovo.

Why is the EU afraid of taking up stronger leadership and more responsibility in the South Caucasus other Eastern Partnership regions? I have one answer only: the fear towards the Kremlin and Vladimir Putin is too big. Allegedly, any provocation should be avoided at all costs. Turkey deserved a credit for teaching the Kremlin a lesson three times in a row. It is about time for appropriate conclusions when it comes to the decisions of the EU. Unfortunately, one more war in Nagorno-Karabakh was needed for that.

No Responses to “The Karabakh Knot: Which one is stronger – Turkey or Russia?”