The Information Defense Legion on Tackling the Kremlin Propaganda 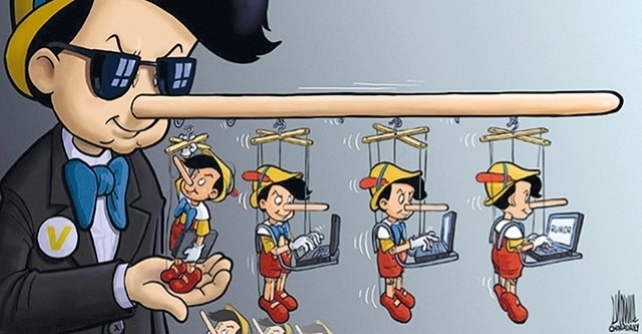 Even the staunchest critic would have to acknowledge that a democratic, united and economically strong Georgia is a serious headache within the framework of the grand strategy of the Kremlin leaders, i.e. the leaders of the modern Russian Federation. Georgia remains a serious black hole for the Kremlin in the relations of the West with the East, and a serious obstacle in terms of the political geography in the relations of the North with the South (here, the “North” is Moscow itself, which has no direct terrestrial connection with Armenia, and then the Middle East). In short, geopolitics has not disappeared. The Kremlin often uses a brutal force to pursue its foreign and domestic policy goals like in Chechnya, Georgia, Ukraine and Syria. It also grossly violates the rules established in the international relations, but manages to remain a player in these relations. It does not give other states sufficient grounds to outcast Russia. The use of brutal force on this path is neither not always possible, but the Kremlin simply changes tools and these tools are no less harmful. These are political subversive games, where a special role is given to information-psychological operations. That is, the kidnapping and killing of Georgian citizens, borderization, airspace violations, information attacks on the Lugar laboratory, confrontations between different groups of society, and reaching a zero consensus on all essential issues, stirring hatred and animosity towards the majority in ethnic minorities – this is part of the information-psychological campaign, which in its turn is a war against Georgia by destroying its statehood.

What is the nature of Russia’s information warfare in Georgia?

We are witnessing a purely communicative process where people try to manage the environment through information, change and by twisting the existing reality. Even a superficial analysis of the information policy of the Russia-Ukraine 2014 and Russia-Georgia 2008 wars and the post-war period reveals that the main targets of the Russian Federation’s military and political elite were to influence the leadership’s decision-making process, to decrease combat readiness of the armed forces, and to make disappear the desire and resistance in society. These goals are still valid, and Russia’s actions have not stopped. In this context, there are a couple of fundamental questions that need to be answered.

First and foremost: In the long run, what could be the main goals of the Russian hybrid war in Georgia?

• Disruption of education and communication systems

How effectively does the Georgian state respond?

I do not support the view that the effectiveness of the government against the threats posed by the Kremlin can only be measured by repelling attacks on the Lugar’s Lab. First, the attack on the laboratory is a strategic-level task, not a strategic-level goal. By such attacks, the Kremlin seeks to increase pressure on the government so that the decision-makers make mistakes. For example, engaging in a completely futile political haggling for the Georgian side, obtain concessions and intimidate the population through creating the image of the Kremlin’s invincibility and the feebleness of the Georgian government on the opposite side. In general, sowing fear and insecurity has a special role in the Russian information and psychological operations. By using different techniques and tactics, the Kremlin also seeks to convince Georgian society that confronting it will be costly both to the state and society. An information attack on Lugar Laboratory is also a way to achieve this goal. If the Kremlin manages to infiltrate the laboratory on favorable terms, it will reaffirm the Georgian government’s weakness and strengthen the belief of that part of the Georgian public that thinks that the key to all conflicts is in the Kremlin, that opposing it makes no sense and that it cannot be irritated. In fact, there is no need to irritate the Kremlin. As long as there is an independent state of Georgia, it will be constantly irritated.

Those interested in Russian-Georgian relations know that if we look at the statements made by the Kremlin’s military and political elite about Georgia, we will see two characteristics of the Kremlin’s communication with Tbilisi; namely, cynicism and threats. Under cynicism falls, for example, the statement of the President of the Russian Federation, where he says that his attitude towards the Georgian people has not changed even in the most difficult moments, including during the August War, and he has remained as benevolent as ever. In this case, it is important to understand the reasons for his self-confidence and optimism so that we will accept, believe and embrace his words. In other words, the President of the Russian Federation believes that he will influence a part of the Georgian society, including representatives of the business, political and public elite.

Threat is a second element that defines Moscow’s attitude towards Tbilisi. The leaders of the Russian Federation often remind us that we can be severely punished for any significant steps taken on the path to Euro-Atlantic integration. Thus, the Kremlin seeks to make its target audience make political decisions in Georgia on the basis of these constructions marked by its narratives. In the end, the narratives of cynicism and threat must produce the most desirable result for the Kremlin on the ground. In Georgia, the ability of society to fight and a large degree of the public resilience must be lost. Groups of confused and undecided people should not be able to unite around such big and important ideas as independence, freedom, or de-occupation.

What is the Information Defense Legion and why was it created?

Meir Elran from the Institute for National Security Studies at Tel Aviv University says that the recent analyzes of the security environment (on the example of Israel) have demonstrated that national security is more than just physical protection. According to him, the mental, social, cultural and political protection of citizens is a priority. Meir Erlan emphasizes the importance of the public engagement, their education and awareness, in citizens’ preparedness and resilience: “An active society is a resilient society, while a passive society is easily vulnerable.”

The fact that the resilience of an individual and various social groups is the basis of the political national resilience as a dimension of defense and security discourse is also evident from the doctrine of Lim Siong Guan, one of the founders of Singapore’s Total Defense System: “It is possible that social inequality may be the cause of the division of society and call into question the unity of Singapore. That is why Singapore’s total defense strategy considers psychological defense to be one of the most important components… If a Singaporean does not have the feeling that he has to fight for his country because this country is the place that offers him the best opportunity for a better future – the rest will fall apart by itself.”

The Information Defense Legion (the project was created with USAID financial support and the active support of the East-West Management Institute, and we want to thank each and every member of the institute for their help) has put the information field of as much of the Georgian population as possible under the security umbrella, through an effective, regular and proactive communication strategy.

We do not wait for the adversary to spread another lie to mislead our people, and let it fill the gaps left in the information field with its own messages: We try to inform our audience in advance of the true goals and motives of the opponent. We strive to contribute to protecting citizens from mental, social, cultural and political influences. In this way, we seek to contribute to building a united, strong and democratic state.