Tension on the dividing line between Georgia and s.c. South Ossetia. Russian occupiers in the village of Khurvaleti 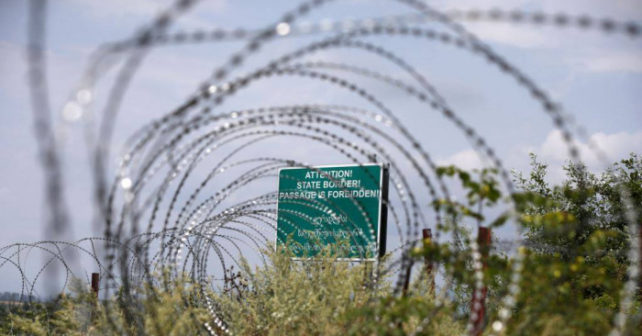 After the August war between Russia and Georgia in 2008, and Russia’s recognition of the self-proclaimed republics of Abkhazia and South Ossetia, the Georgian population of the occupied territories and near the demarcation line was subjected to unremitting terror by the occupation regimes of these two formations. Almost every day there are reports of kidnapping of Georgian citizens for ransom, murder, and attempts to seize new Georgian territories by Russian puppet regimes in both republics. In December 2018, InformNapalm published material on the ongoing tensions on the demarcation line and on the initiative of Georgian activists who voluntarily patrol and monitor the moves of Russian occupiers.

Over the past week, the tension has escalated again in the Georgian village of Khurvaleti where “South Ossetia” has been stepping up since late last year.

On March 15, village residents reported to the Power in Unity anti-occupation movement that armed Russian border guards in masks have entered the territory controlled by Tbilisi and are in the gardens of local residents. In Facebook, the movement leader Davit Katsarava called on the citizens and the Georgian government for a timely response. 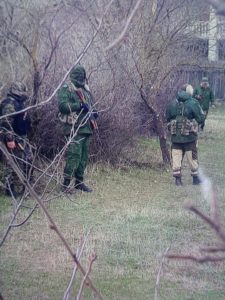 The members of the movement and other various Georgian civil organizations fighting the Russian occupation headed for the conflict location but were apprehended at a checkpoint by the Georgian police and were not allowed into the village. Georgian authorities have reported that there were no foreign troops in the territory of Khurvaleti. It came to the verbal exchanges between the law enforcement and the arrived citizens: “If the occupiers are not in the village, and this is a day like any other, why are you holding us here and we cannot enter? We’ve come as peaceful citizens with no weapons.” 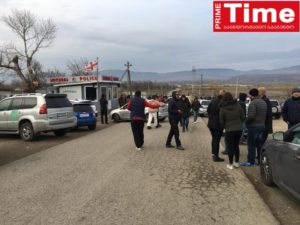 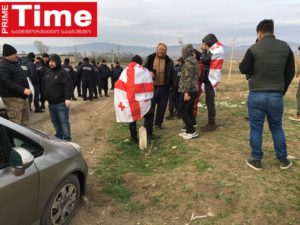 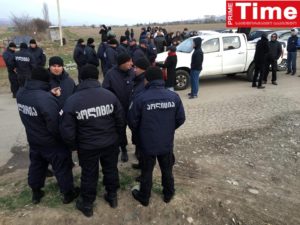 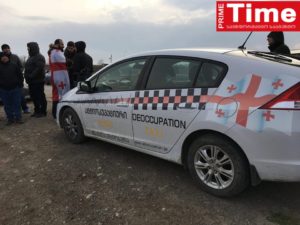 Activists spent the night at the checkpoint.

Various statements from the Georgian authorities followed. Konstantin Tabasarashvili, the Mayor of Gori Municipality, which includes Khurvaleti, had confirmed that masked persons have infiltrated the Georgia-controlled territory, but Georgian law enforcement controlled the situation.

Kitevan Tsichalesvili, Georgia’s Minister of Reconciliation and Civil Justice, said that according to the obtained insights, Russian soldiers had already left the places where they were deployed and called for the use of information responsibly given the vulnerability of the occupied region.

It was only the following day that a limited number of journalists and activists were allowed to visit the village. They were taken there in police cars and accompanied by Georgian police. Davit Katsarava from the Power in Unity movement was not included in the group.

According to the admitted monitoring group, the tracks left in the gardens led to the conclusion that the occupiers made preparations to install a fence, but gave up after the interference of the citizens and the Georgian law enforcement forces.

Currently there are no representatives of the occupation authorities in the village, the police remain at the scene.

Civilian activists have withdrawn but urged the authorities to appoint police patrols for guarding the site around the clock.

Power in Unity is a civil anti-occupation movement that is not related to any political power. Georgian activists announced its creation in July 2017, when “South Ossetia” once again moved the border signs near ​​the village of Bershueti 500 meters into the Georgian territory and grabbed another 10 hectares of land. Volunteers have patrolled for more than a year on the so-called border with “South Ossetia” to prevent new occupation of Georgian land by Russian occupiers. 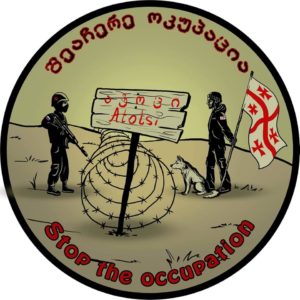 Irakliy Sukhumskiy, a member of the Power in Unity Voluntary Patrol commented on the situation in Khurvaleti for InformNapalm:
“In summary, I can comment on several facts: On March 15, Russian occupiers have entered the territory controlled by Georgia. No matter how many countries try to hide this fact, there is already a clear picture of everything. For some reason, the occupiers came back to the terrain they stood before March 15. It is possible that after the escalation of tension, talks have been held and some agreement has been reached. An action against the movement activists fighting the creeping occupation has started, trying to discredit us accusing us of unnecessary panic and tension. For the authorities in Georgia, the occupation forces’ methods to gradually grab new and new territories may be unimportant. For us, however, there are no doubts that they seize villages, towns or small plots of land every day. We will continue to patrol, respond to every signal, and try to prevent the occupying forces from moving for another meter into the territory of our country. We will all stay, this is our duty to our ancestors and the future generation, for which we are bound to keep this country with ancient history and traditions, for which millions of Georgians have paid with their lives. And I’m sure we will certainly defeat this evil.”

The Power in Unity anti-occupation movement continues to patrol in the area of ​​the village of Atotsi. There, the pushing of the demarcation line into the Georgian territory was stopped by the activists, but last week there was another activation of Russian patrols there.

Near ​​the village of Khurvaleti, the occupiers reappeared in mid-November 2018 and began to put new barbed wire fences around the village.

In early February, they began building the watchtowers near the village. 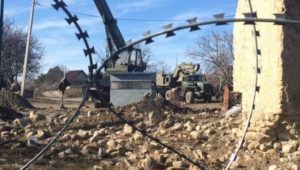 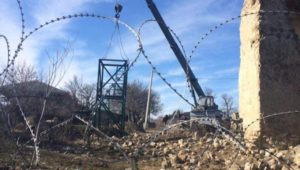 “There is nothing but a fear here,” the local residents commented on the observation and turned to the Georgian government and international missions for protection. “They watch me directly, and I will have problems with that. From the government nobody will neither come, nor want to know”, says local resident.

The village of Khurvaleti is in a difficult mountainous area, with weak Internet signal, which makes it difficult for the activists to react quickly, hurrying to help stop the continued seizure of Georgian land by their presence. 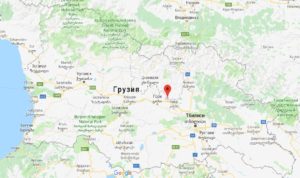 At the end of 2018 after another kidnapping of a young woman from her own garden in the village, Georgia’s ombudsman Nino Lomjaria said in an interview with the media: “The village of Khurvaleti is one of the most affected villages on the demarcation line. After installing barbed wire, 36 hectares of farmland, grassland, graveyard and several houses landed in the occupied area, irrigation water was halted since 2008, kidnappings and detentions have become everyday’ reality.” The Ombudsman also drew attention to the fact that access to the conflict regions for international human rights and observatory organizations is limited. The inhabitants of Khurvaleti explain the kidnappings by the award of 10,000 rubles for each detainee to the “border guards” by Tskhinvali. The Ombudsman’s office confirms that they also have similar information.

Several days before the exacerbation of the situation in Khurvaleti on the so-called “border” between Georgia and Abkhazia, the 29-year-old Irakli Kvaratskhelia, a resident of Georgia, devoted church-goer and a young father, was kidnapped. The young man was detained on March 10 by the Abkhaz authorities when he crosses the border where his relatives live. He was taken to the Russian military base in Nabakevi, and hours later the Abkhaz authorities reported that he had committed suicide by hanging. Kvaratskhelia’s close relatives claimed that there were signs of beating, torture, and electric shock on his body. An investigation has been conducted in Georgia, the results of which have not yet been published.

This is the latest in a series of unpunished killings of Georgian citizens kidnapped by soldiers of occupation regimes in self-proclaimed republics.

“Wounds, sorrow, anger, death, barbed wire, wars, and armed men with masks: these are the Georgian-Russian relations today. Not “tourism”, “Khinkali”, “Saakashvili”, “songs and dances”. Nobody is going to tell you this on TV, but you have to know it because of the uniforms, the weapon, the barbed wire, the bullets, and the whole pain that Russia brings to Georgia, and you still pay for this today”, bitterly summarized in his blog Egor Kuroptev, journalist and author of the Borderline broadcast which closely follows what is happening in Georgia.

On Sunday, March 17th, the Georgian diaspora held rallies under the slogan “No Occupation” at the Russian Embassies in various countries around the world. In New York , Rome , Berlin , London, Thessaloniki , Athens , Ankara , Barcelona protestors  with posters “Russia is an Occupier”, “Russia Kills”, “Stop Russia” expressed condolences to the family of Irakli Kvaratskhelia. They protested against the penetration of Russian occupiers into the territory controlled by Georgia and condemned the Russian occupation.

Translated by Andrii Grygankyi, edited by Svitlana Kemblowski
A link to the authors and our project is obligatory for any reprint or further public use of the material. (Creative Commons — Attribution 4.0 International — CC BY 4.0)
Repost and share with friends. Follow us on Facebook / Twitter

No Responses to “Tension on the dividing line between Georgia and s.c. South Ossetia. Russian occupiers in the village of Khurvaleti”