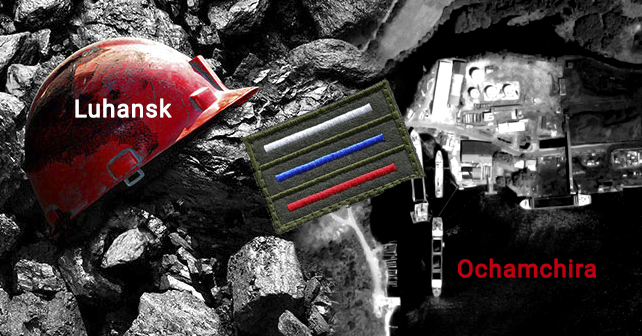 Russia plans to supply coal from the occupied Donbas to Turkey through the Black Sea port of Ochamchire in self-proclaimed Abkhazia, which is controlled by border guards of the Russian FSB. Sergey Ladaria, a representative of self-proclaimed Abkhazia in occupied Luhansk and member of the “Chamber of Commerce and Industry of Abkhazia”, told about such plans during an interview.

He said that an agreement about the cooperation in the supply of coal has been reached, and only the price remains to be agreed upon.

In the scheme described by the Abkhaz representative, the Ukrainian coal will be smuggled from the Donbas to Turkey through Russian territory. Logistically, the most probable path is a railway route through the stations Dolzhanskaya, Taganrog, Rostov, Krasnodar, Tuapse, Sukhumi, Ochamchire, and further to Turkey by sea.

Why Ochamchire route was chosen

Probably, this contraband scheme was chosen by the Kremlin curators for several reasons.

Firstly, it allows Russian ports to avoid international sanctions, which can be initiated by Ukraine or Ukrainian companies.

Secondly, it will be difficult to track the export of coal through the port of Ochamchire. According to international rules, it is a port of Georgian jurisdiction, it is closed for foreign ships calling.

At the same time, since 2009 Ochamchire has been a base for coastal guard ships of the Russian FSB, and in the future – for larger ships of the Black Sea Fleet (including cruisers of the 1164 project). In fact, it is a Russian naval base, the rights of its use are formally enshrined by the Agreement between Russia and Abkhazia dated January 26, 2009, and the Resolution of the Russian Government No. 91, dated February 26, 2010.

In addition to the berths for FSB patrol ships, there is a North cargo berth in the harbor, next to which there is a coal terminal. 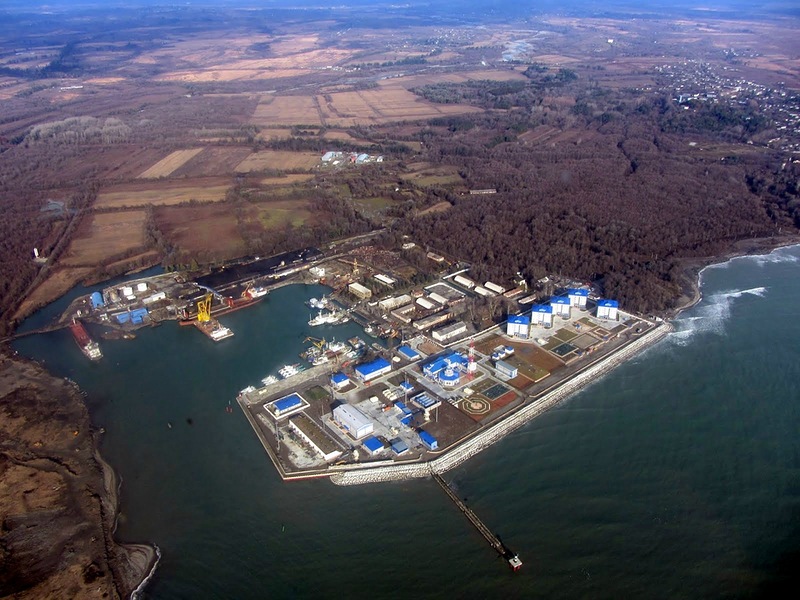 Since 2013, a Russian military compound has been set up near the port. Google satellite imagery shows high activity in the port: 2-3 coal supply ships can be seen at the quay wall, and the terminal is littered with coal. It can be assumed that before entering the port, civil dry-cargo ships disconnect their transponders in order to avoid being penalized.

Thirdly, coal loaded in Ochamchire can be presented in foreign markets as being mined in Abkhazia. It is well known that the coal deposits in Tkvarcheli with proven reserves of about 4 million tons have been mined since the Soviet times. However, even the Russian – Abkhazian propaganda media admits that coal is not mined in this coalfield any more, and as of 2018, the coal mines in Tkvarcheli do not function: “Also on the fifth site, a Turkish firm was extracting coal by open pit method. Now the supply has decreased there – the coal seam goes deeper into the ground. It means the cost for removal of overburden is high. Thus, the coal mining has been suspended there for now. It has to be switched to deep mining there. And this company does not mine that way,“ Alexander Chengelia, the president of the Black Sea Natural Resources company, told the Sputnik-Abkhazia news website.

Fourthly, historical and political ties between Abkhazia and Turkey play a role. As it is known, the Abkhaz diaspora in Turkey has existed since the Ottoman Empire times and amounts, according to various sources, to from 300 to 500 thousand people, exceeding the population of Abkhazia itself.

One of the Turkish repatriates to Abkhazia is Typhoon Naimovich Ardzinba, a member of the Abkhaz “parliament”, an influential businessman who most likely kept his Turkish passport (that is he has dual citizenship). He is the head of Tkuarchal Coal LLC, formerly known as the Turkish-Abkhazian company TAMSASH. A resumption of coal mining in Tkvarcheli region in the early 2000s, with about $20 million contributed by Turkish investors, was associated particularly with Mr. Ardzinba and his Turkish relatives and companions.

Most likely, the Abkhazian firm which will supply Luhansk coal to Turkey is Tkuarchal Coal LLC.

It is interesting that in 2015 in Sukhumi, Typhoon Ardzinba, together with the “Prime Minister of Abkhazia”, took part in a meeting with Turkish businessmen and officials from Kocaeli province: Hussein Yuzyulmez, Yunal Keken, Ismail Baran, Ali Gaidar Bulut, Mehmet Ellybesh, Hasan Ayaz, and others (35 people in total). This event caused a sharp demarche by Georgian diplomats. At the same time, Ankara’s economic and political influence on Tbilisi is so significant, that Georgia was forced to turn a blind eye to  calls by Turkish ships to the ports of Abkhazia.

Information about plans to sell coal from occupied Luhansk Oblast to Turkey through Ochamchire, announced by Sergei Ladaria, might be part of the Russian strategy to reduce the costs of financing occupied territories from the Russian budget through smuggling the natural resource. Ukrainian coal, probably, was exported to Russia and Abkhazia as early as 2015. For example, it is worth taking into account photos taken at Sukhumi railway station on June 11, 2015 and published by a local blogger. 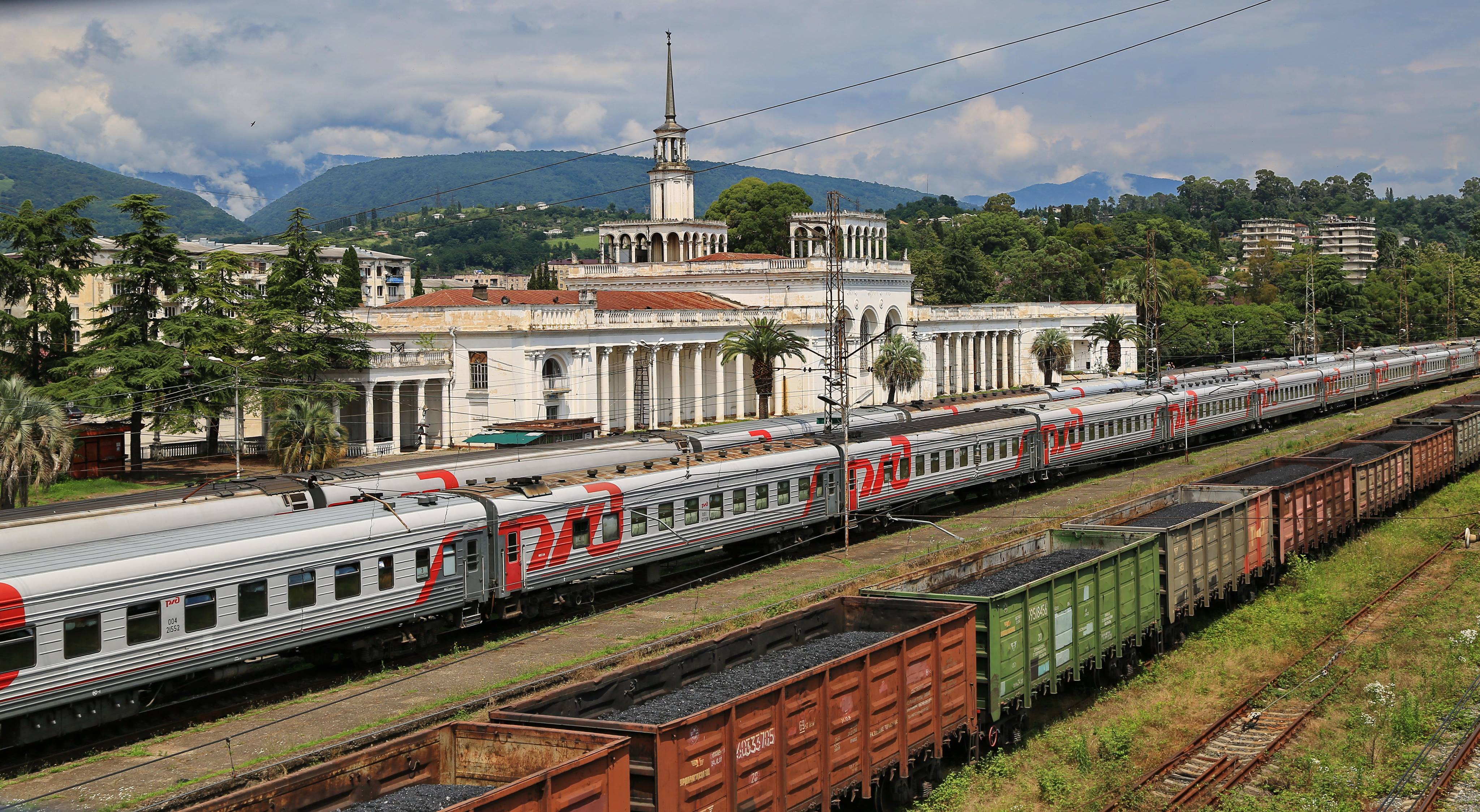 Then the blogger pointed at a Russian cargo train loaded with coal. He noted that this coal was transported through Abkhazia and was exported through the illegal port.

Ochamchire is a contraband hub of Russia

On January 27, 2018, Anatoly Baronin. representative of the analytical group Da Vinci AG, on the UNIAN website also described one of the likely schemes of supply of contraband cigarettes from Syria through the port of Ochamchire. Smuggling in the port of Ochamchire is conducted under the cover of Russian military and border guards.

Given these facts, it is necessary to monitor any visits of Turkish and other sea vessels to Ochamchire. This is just one of the possible schemes that Russian aggressors can successfully take advantage of in their own interests.

Other Russian schemes of coal supply from the occupied Donbas

Polish journalists have revealed another coal supply scheme from the occupied Donbas to the European Union countries which was organized by the former “Deputy Minister of Fuel and Energy” of the Luhansk People’s Republic (LPR) Alexander Melnichuk. They found out that coal from the makeshift coal mines in the occupied Ukrainian territories was mined at a cost of $22 per ton, and then, with forged documents, was delivered to Russia. The owner of the cargo and importer to Poland was the company DonCoalTrade, registered by the “ex-official of the LPR”. Then the coal was transported by sea and through other countries and delivered to Poland – already at a price of $140 per ton. The fact there was a supply of 11,000 tons of coal was admitted by the Ministry of Energy of Poland. As a result, the front company of terrorists came under US sanctions.

Thus, unveiling business schemes used by militants from the Luhansk / Donetsk People’s Republics (L/DPR) and their Russian curators can lead to the next package of sanctions against companies that contribute to the aggressor, as well as against specific key persons.