Transnistria, an unlikely refuge for Givi 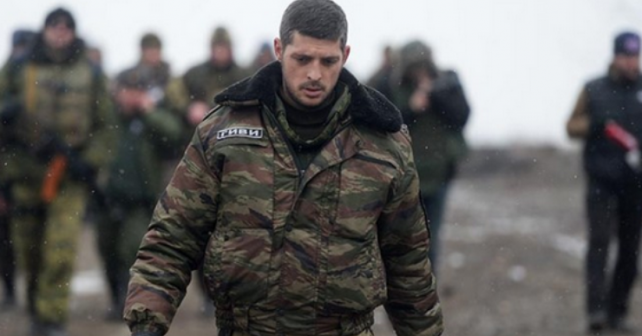 After the elimination of Arsen Pavlov (also known as Motorola), Russian militant and a rock-star commander of the Sparta gang, information about the in-fighting between his friend Mikhail Tolstoy (also known as Givi) and the head of Donetsk People’s Republic (DPR) Alexander Zakharchenko has received a new confirmation. Ex-Head of the presidential security of Pridnestrovian Moldavian Republic (PMR or Transnistria) urged so-called Ministry of State Security (MSS) of the DPR to take measures to detain the deserter.

It is worth mentioning that on Saturday, 22 October, Ukrainian Cyber Alliance hacktivists (comprising RUH8, FalconsFlame, Trinity and CyberHunta groups) provided InformNapalm international intelligence community with the data from hacked gadgets of Arsen Pavlov and his wife Elena Pavlova (Kolenkina). In our investigation we presented the first materials that directly and indirectly pointed to the Russian trace in the neutralization of Motorola.

It is noteworthy, that Dmytro Tymchuk, the coordinator of the Information Resistance group, had reported previously: “Givi started playing a local chieftain and confronted Zakharchenko”.

Information available back then on the web looked like rumors. But on October 24, Eduard Basurin, the spokesman of the self-proclaimed DPR posted a message from his colleague, colonel Valeriy Gratov, who had an active part in the Russian intervention in Transnistria and also served as the head of the presidential security of the self-proclaimed PMR:

“My fellows from the PMR reported strange news to me – the commander of Somali, Misha Tolstoy (Givi) has brought his girlfriend over to Transnistria. Also he is in a rush to sell his 4 apartments and garages in Donetsk and Makiivka.

I didn’t believe in any “confrontation” with Alexander Zakharchenko before that and considered it all a fake. I am still sure that there are no conflicts. But why Misha is trying to leave the territory of the Donetsk People’s Republic with such a great haste then?! Does it mean that a combat leader is afraid of some Ukrainian operatives and abandons his soldiers in a difficult time, when the enemy has such a big grudge against Novorossia?!

I did not expect such a turn. I appeal to the MSS to take measures to detain the deserter. He sets a bad and unworthy example to the rest of the soldiers. First of all, these actions insult the memory of his friend – the hero of Novorossia Arsen Pavlov (Motorola).” 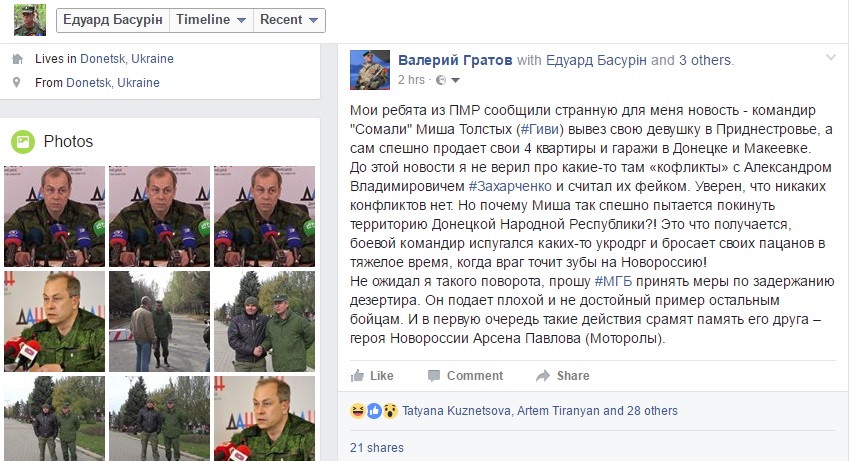 Social networks erupted in sarcasm to this: “Does Givi really hope to get out of reach of the FSB in Transnistria?”. 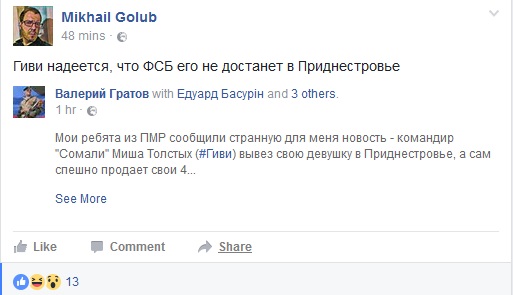 It is unknown at the moment, whether Givi managed to leave the territory of the DPR. It was reported earlier, that he had already “escaped to Transnistria”. However, according to this post of the Russian colonel Gratov, Givi had only evacuated his sweetheart and then returned to deal with financial issues.

(Creative Commons — Attribution 4.0 International — CC BY 4.0) information specially prepared for InformNapalm.org, an active link to the authors and our project is obligatory for any reprint or further use of the material.

One Response to “Transnistria, an unlikely refuge for Givi”