Anna Dorn, the observer of the Russian and foreign press  has posted on Facebook her point of view on the situation with two recent terrorist acts. She explains why she sees the traces of the Russian special forces after the Kogalymavia’s Airbus A321 crash in Sinai on October 31 and the terrorist strikes in Paris on November 13. It is worth mentioning that Anna, being a citizen of Russia, stands her ground in the question of Russia’s criminal actions. It is difficult to accuse her of bias, because Anna operates with facts and the analytical parallels she makes speak for themselves.

I do not believe that the terrorist strikes against our plane and in Paris were conducted by ISIS.

As for Kogalymavia’s Airbus A321:

As for the terrorist strikes in Paris on November 13:

Right after the terrorist attacks in France, Sergei Markov (a former Russian Federation deputy, member of the Public Chamber and president’s representative) pronounced his bizarre thoughts on the settlement of the situation:

“1. There is an urgent need to improve security in Moscow. 2. Russia, the United States and France must crush ISIS in Syria, Iraq and Libya. 3. It is urgent to stop the conflict between Russia and the West over Ukraine. Junta should be replaced with a dummy government, the Constitution must be changed, the neo-Nazis are to be removed, new free elections have to be conducted. Kiev junta is one of the main obstacles to the joint fight of the US, European Union and Russia against terrorists” – said Markov in Facebook. 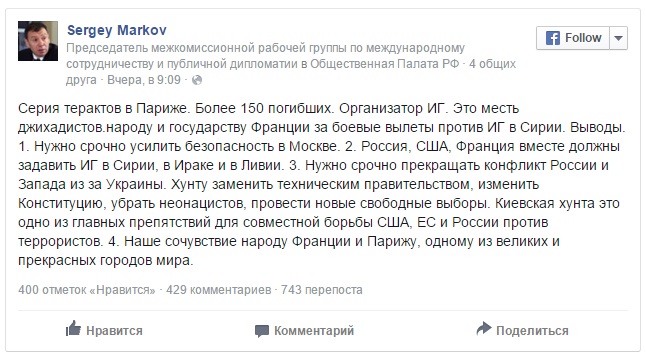 Thus, Russia not only gives diplomatic hints, but almost directly tries to enforce its unity with EU and US in order to lift sanctions and resolve the ‘Ukrainian question’ about Crimea and Donbas (with following taking control over Ukraine). And the Kremlin is ready for both spending millions of dollars on bombing opposition in Syria (pretending the fight against IS) and making terrible terrorist acts all over the world.