Aggressive Russian “soft power” in Ukraine on eve of the war 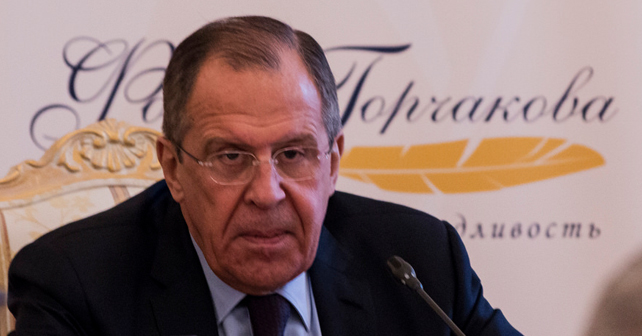 On February 2, 2015, an adviser to the head of the Security Service of Ukraine (SBU) Markiyan Lubkivsky made a statement that the SBU closed the office of the Gorchakov Public Diplomacy Fund in Kyiv for anti-state propaganda among students. The next day, the chairman of the Russian Federation Council Committee on International Affairs Konstantin Kosachev described the SBU actions as a “witch-hunt” and lamented that the news of the fund’s closure in Ukraine did not attract the attention of human rights activists. Sean Townsend, a speaker of the Ukrainian Cyber Alliance describes in his analysis how access to the mail of one of the experts from this fund disclosed the forms of Russia’s foreign policy strategy (“soft power”).

The Fund was established by the Decree # 60-rp of Russian President Dmitry Medvedev on February 2, 2010. Its founder was the Russian Ministry of Foreign Affairs. The Fund is financed from the Russian state budget. The purpose of the Fund is “to provide support to the public diplomacy, offering assistance to participation of the Russian non-governmental organizations in international cooperation and ensuring active and efficient involvement of institutions of the civil society in the foreign policy process”. It sounds good in theory, but we have learned that in practice the Russian “soft power” is the Buryats on the tanks who follow the propagandists.

We have seen similar Russian technology many times. In previous investigations of the FrolovLeaks series, we clearly demonstrated how the Russian Orthodox Church and certain Russian politicians (Sergey Glazyev) or oligarchs (Konstantin Malofeev) were involved in financing terrorist activities. Different “feudal” clans compete among themselves for influence and cash flows, under the cover of culture, charity, religion, and free (from the conscience) press, that is, what could really be called a “soft” power, if not for one exception. All these round tables, conferences, rallies and “independent” publications are not intended to promote the Russian brand and the belief that “the Russian world” has civilizational advantages. They are only a cover for recruitment and subversive activities aimed at scrapping the world order. Softness in the Russian “soft power” is no more than in the cobbles of the Red Square. In this investigation, we will describe how Russia directly finances terrorists and propagandists through the fund that is run and financed by the government.

In November 2013, the Kharkov separatist Sergey Moiseev, a leader of the organization “Rus Triedinaia” (Triune Russia), sent an application for receiving a grant from the Gorchakov Fund for the project “Implementation of publishing activities, organization of production and sale of information products aimed at spiritual unity of the peoples of the Russian World” for the second half of 2014, for a total of 3.5 million ruble. The partner for “spiritual unification” was, among other things, the Consulate General of the Russian Federation in Kharkiv (EML letter, all letters contain digital signature DKIM, archive of documents). 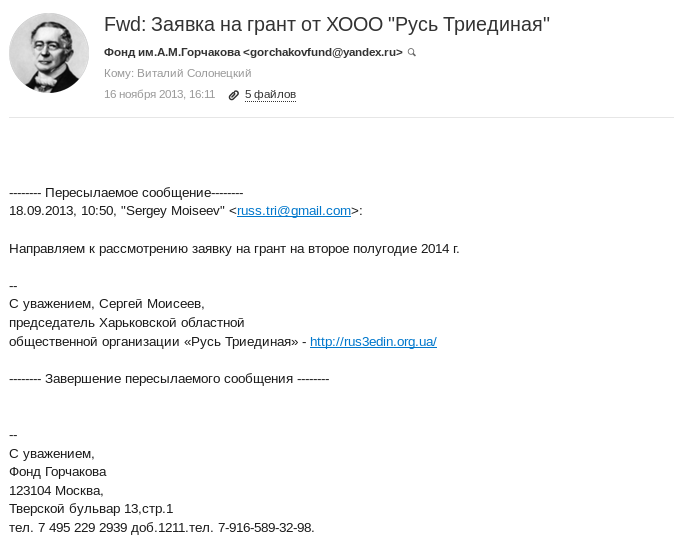 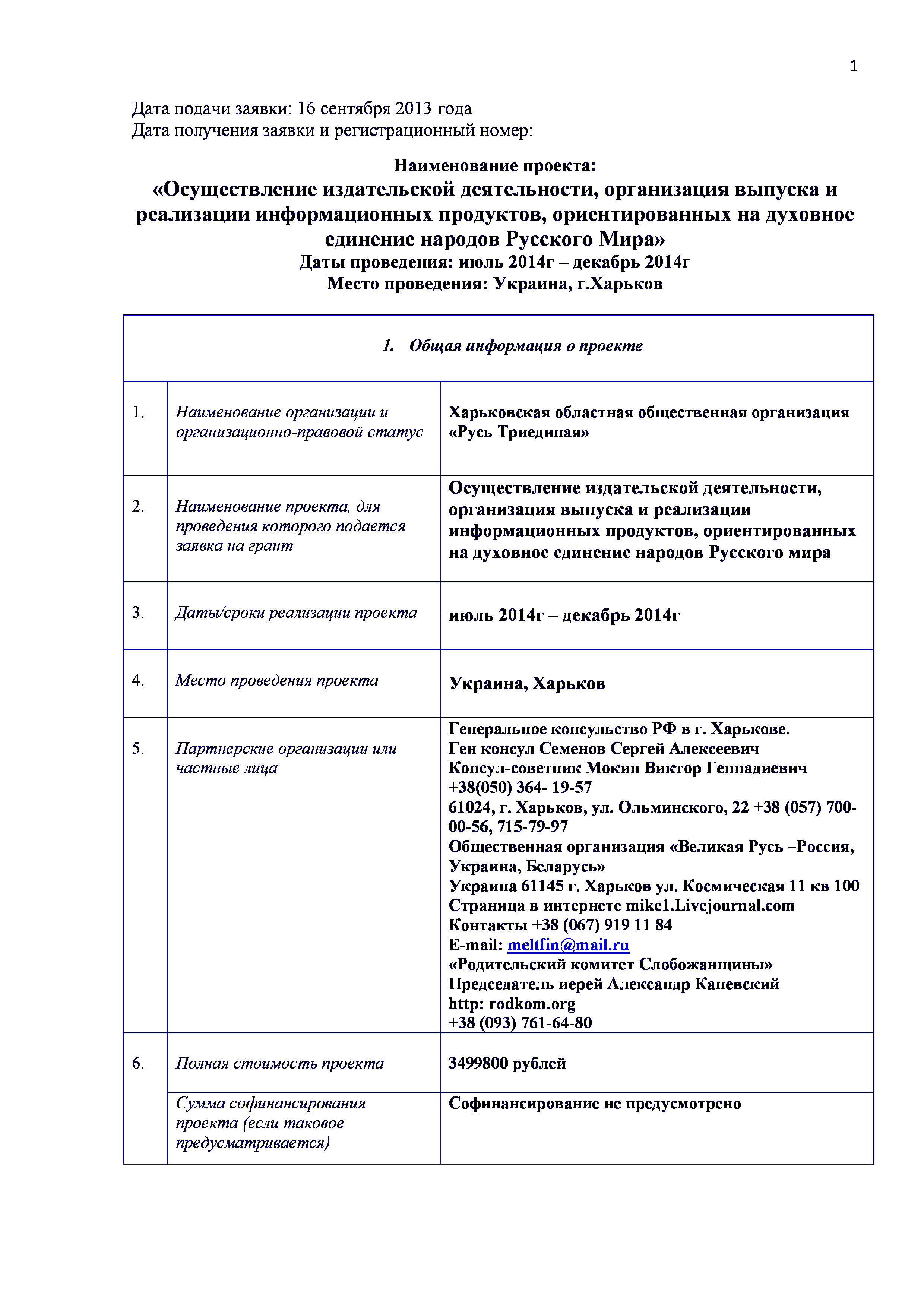 A similar application was submitted to the Fund by another prominent “compatriot” – Yuri Apukhtin – on behalf of the public organization “Great Russia – Russia Ukraine Belarus”, this time for the television project “Creation of a studio for the production and distribution of television, video and electronic information products aimed on promotion of ideas of the Russian world” in the amount of 2.263 million rubles (its partners were “Rus Triedinia” and the political club “Alternative”. In May 2017, the Kyiv District Court in Kharkiv sentenced Yuri Apukhtin to six years in prison for “mass riots” and “violent change of the constitutional order (by a group of persons)”.

It would be interesting to see the reaction of Mr. Kosachev if someone tried to hold a “referendum” on the establishment of the Moscow People’s Republic. Would he give the organizers of such a “foreign policy process” protection in their constitutional right to freedom of speech? There is a question for the Security Service of Ukraine: Is it too late to charge Yuri Apukhtin with the financing of terrorism? (EML letter, архив документов). 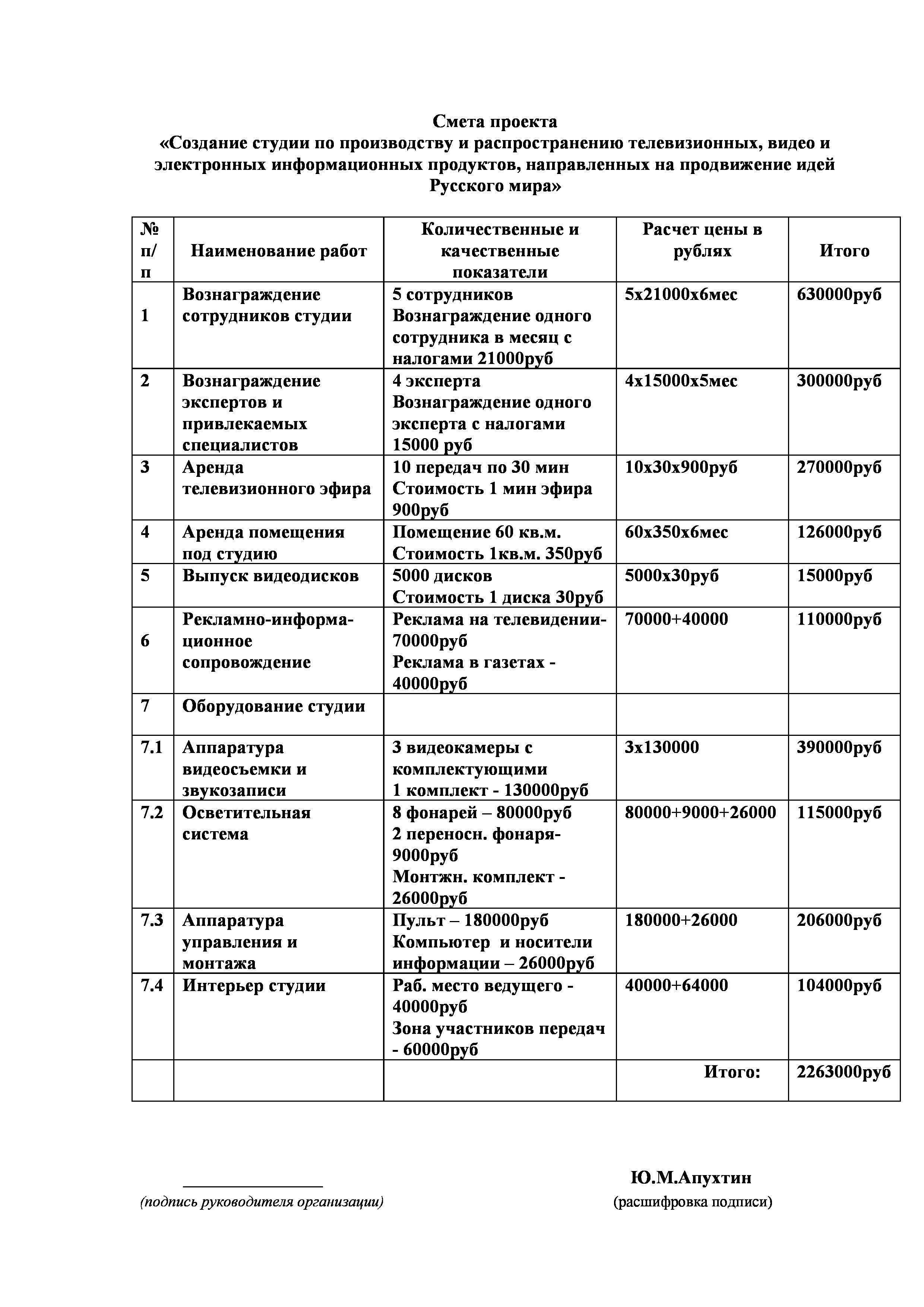 The Gorchakov Fund granted 965,897.50 rubles to the All-Ukrainian Public Organization “Human Rights Public Movement Russian-speaking Ukraine” for the project Youth Modeling “CES, TS and CIS: Build Your Future”. Do not be confused by the words “human rights” and “all-Ukrainian” – read the description of the project:

“Paying attention to the fact that the strategy of the state youth policy in the Russian Federation defines the youth policy as a system of forming priorities and measures aimed at creating conditions and opportunities for successful socialization and effective self-realization of the youth, developing its potential in the interests of Russia and, therefore, at economic and cultural development of the country, ensuring its competitiveness and strengthening national security. In addition, according to the laws of the Russian Federation, the main means of developing the potential of young people is to involve them in the socio-economic, socio-political and socio-cultural life of Russian society.”

The question of what country’s national security is protected by the “all-Ukrainian social movement” is rhetorical. The application was submitted by the head of the “youth team” Valeria Manziuk (letter EML, archive of documents). 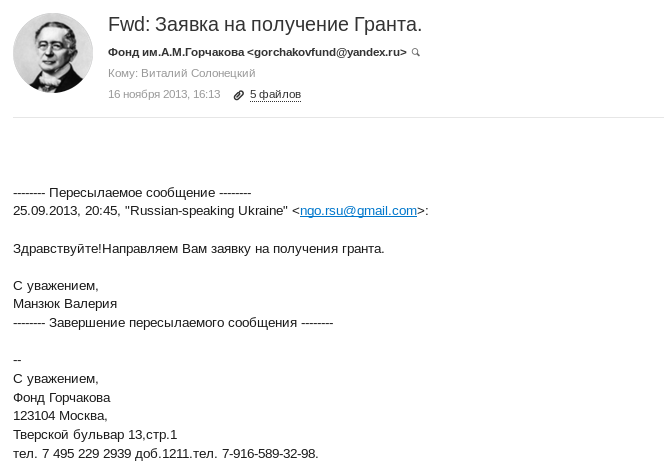 The Fund of Russian Compatriots in Bulgaria requested financing of 50% of 6 thousand euros per month, that is, 1.6 million rubles a year, for the publication of the Russian-language magazine Business Contacts, the second half was provided by Joker Media LLC (Sofia, 1164, Street Krum Popov Street, 1). The Fund of Compatriots itself has been engaged in the “balanced” coverage of Russian events since 2003, and directly declares itself as a soft power. We have already seen how Russia implements its “soft power” in Crimea, Donbas and Kharkiv. One can play by the rules only with those who play fair. Neutrality, fair balance and other journalistic standards are used by the aggressor for false propaganda. (EML letter, archive of documents). 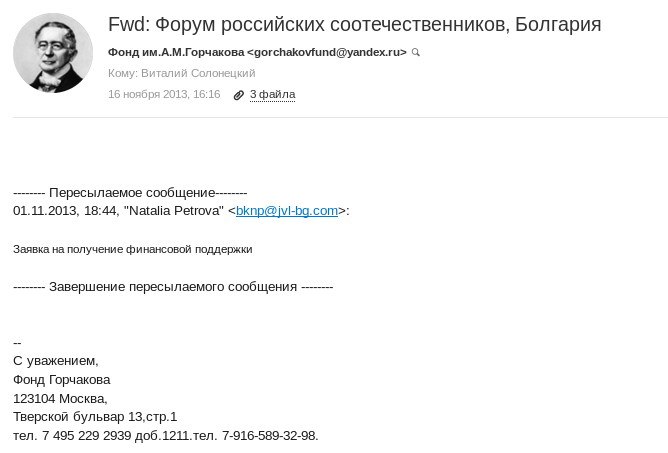 Another petitioner from Kharkiv, Konstantin Ervantovich Kevorkyan, requested 393 thousand rubles for the TV project “School of Technology” on behalf of the Public Foundation “First Capital” and a video channel with the same name that talks about “genocide of the people of Donbas” and “Ukrainian junta” (EML letter, archive of documents).

An accomplice of terrorists, Valentin Chernov requested from the Gorchakov Fund 1.14 million rubles for Odesa School of Russian Social Entrepreneurship and another 1.42 million for Odesa Festival of Russian Culture and Language dedicated to the 200th anniversary of Mikhail Lermontov. Valentin Chernov, along with Igor Markov, are co-founders of the Rodina Party and the separatist movement “Edinaya Odesa”. Apparently, unlike Petro Poroshenko, he has not read the poem “Goodbye, unwashed Russia” by Lermontov. Instead of the Lermontov festival, Chernov organized the movement “Kulikovo Field” in Odesa, and you remember well how that ended. If they tell you that the “Russian world” is Lermontov, Dostoevsky and Pushkin, do not believe it! The Russian world brings war. (EML letter, archive of documents).

The war was prepared not only by terrorists, but also by philosophers. Russian propagandist Alexander Gelevich Dugin asked for 6,800,720 rubles for “Eurasian Union: the image of the future”, another 1.2 million rubles was given by the Moscow Tempbank for office rent. We have already drawn attention to the fact that there are no institutions in Russia that do not participate in the destructive policies of the Russian state. At the transition from authoritarianism to the usual totalitarian way, everything is used – education, medicine, culture, business, and the church. In addition to the bank and the fund, Dugin received 1 million rubles from the Institute of Socio-Economic and Political Researches (ISEPR Foundation) (EML letter, archive of documents).

A half-year plan for propaganda just in Ukraine alone reached a quarter of a million dollars. All applications presented in this article were filed in September-November 2013. Two weeks after the last applications had been received, the Berkut brutally dispersed protesters from the Maidan in Kyiv and the Revolution of Dignity began.

We will tell in the next story what the inconspicuous Gorchakov Fund did after that: subversive activities in the Baltic States, Belarus, Central Europe, and how the agents of influence are turning into the fifth column. The fact that almost every Russian grantee has its file at Myrotvorets speaks for itself.

Evidence data was exclusively provided to InformNapalm by the hacktivists of the Ukrainian Cyber Alliance. InformNapalm Community bears no responsibility for the sources and origin of the data