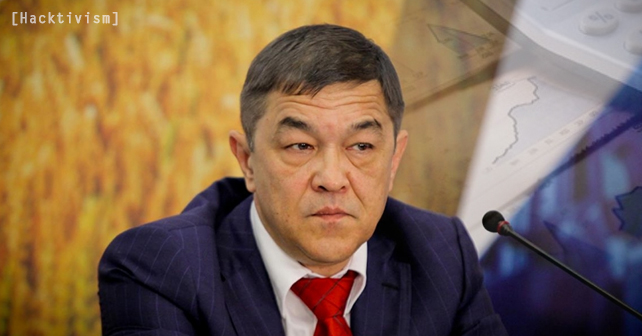 Long before the Russian military invasion into Ukraine, Russian media started a concerted process of brainwashing Ukrainian citizens and disseminating media viruses. After the annexation of Crimea and the armed intervention in Donbas, most Russian media projects still continue to operate. Some of them changed names, while the most ardent propagandists moved to Russia and now prophesy from there. The ban on the Russian channels broadcast in Ukraine also played a role in reformatting pro-Russian projects. With the start of the war, Russian projects had to rethink their policies and use soft power methods, faking objective journalism, instead of pushing straightforward and crude propaganda of the Kuchma-Yushchenko-Yanukovych era.

These projects use the services of some genuinely pro-Ukrainian journalists, who do their part to high professional standards. But in general, such projects operate based on the 80/20 Pareto principle, providing 80% of neutral information and the remaining 20% of Russian propaganda.

Hacktivists of MadUkrop$_Crew uncovered some of the secrets of pro-Russian projects in Ukrainian media space. Based on the data they provided, we will analyze the mailbox of a Russian journalist Iskander Khisamov (the full dump of his mailbox is available for download here).

Background information: Iskander Khisamov started his journalistic career in Uzbekistan, but in the 90s moved to Russia, where he worked for a number of Moscow media. After the Orange Revolution, he arrived in Kyiv to launch the Ukrainian version of the Russian magazine Expert, which he managed until 2009. Gradually, he became a familiar face in the Ukrainian media space and even worked for Serhiy Tyhypko’s presidential campaign. Later, he took part in launching the Ukrainian version of the Russian magazine Reporter and worked as a presenter for UBR channel. He pretended to understand Ukrainian politics and simulated а storm of activity.

Wikipedia provides a rather detailed biography of Iskander Khisamov, which was added by his subordinates, with his consent and revisions, back in 2015. 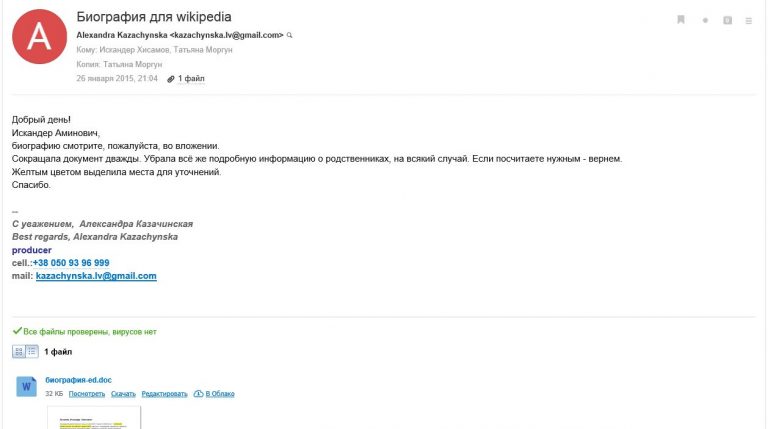 After Maidan, Khisamov worked a bit more in Ukraine before finally moving to Moscow, where he is now chief editor of Ukraina.RU website, a Russian project run by the state-owned Russia Today news agency (formerly RIA Novosti). The project conveys Russia’s official stance on issues of Ukraine.

The project’s brandbook is rather curious:

“Ukraina.ru is to become a full-fledged information and analysis resource dedicated to Ukraine and catering primarily for the Ukrainian audience.

In fact, it will take the niche of the opposition media, currently vacant owing to the efforts of the Ukrainian authorities. Due to its location in Russia, Ukraina.ru will be able to freely convey an alternative view on Ukrainian realities and represent the position of the millions of Russia-friendly Ukrainian citizens.
The readership of the resource should perceive it as part of the Ukrainian information space (project description as of 4/4/2016). 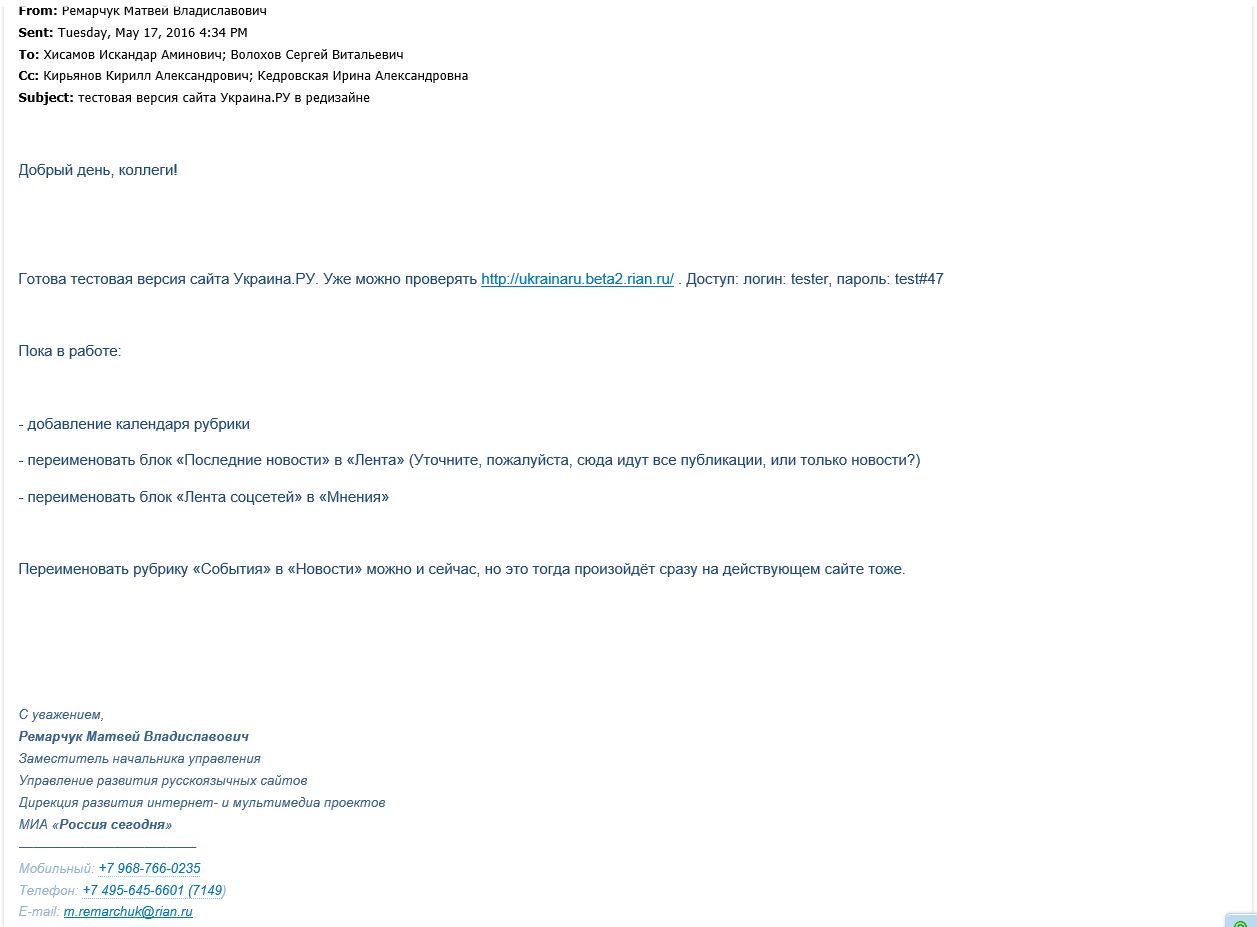 Ukrainian journalist Ihor Huzhva actively helped Khisamov launch new projects in Ukraine. In the 90s, Huzhva had worked for regional Donetsk media before moving to Moscow in 2001, where he worked for the Russian spin doctor Gleb Pavlovsky, and then for Expert magazine, in the same editorial office with Khisamov. Later, he returned to Ukraine and is now chief editor of Segodnya newspaper (owned by Rinat Akhmetov and his SCM).

The correspondence between Khisamov and Huzhva starts in 2009 and includes almost 400 emails. 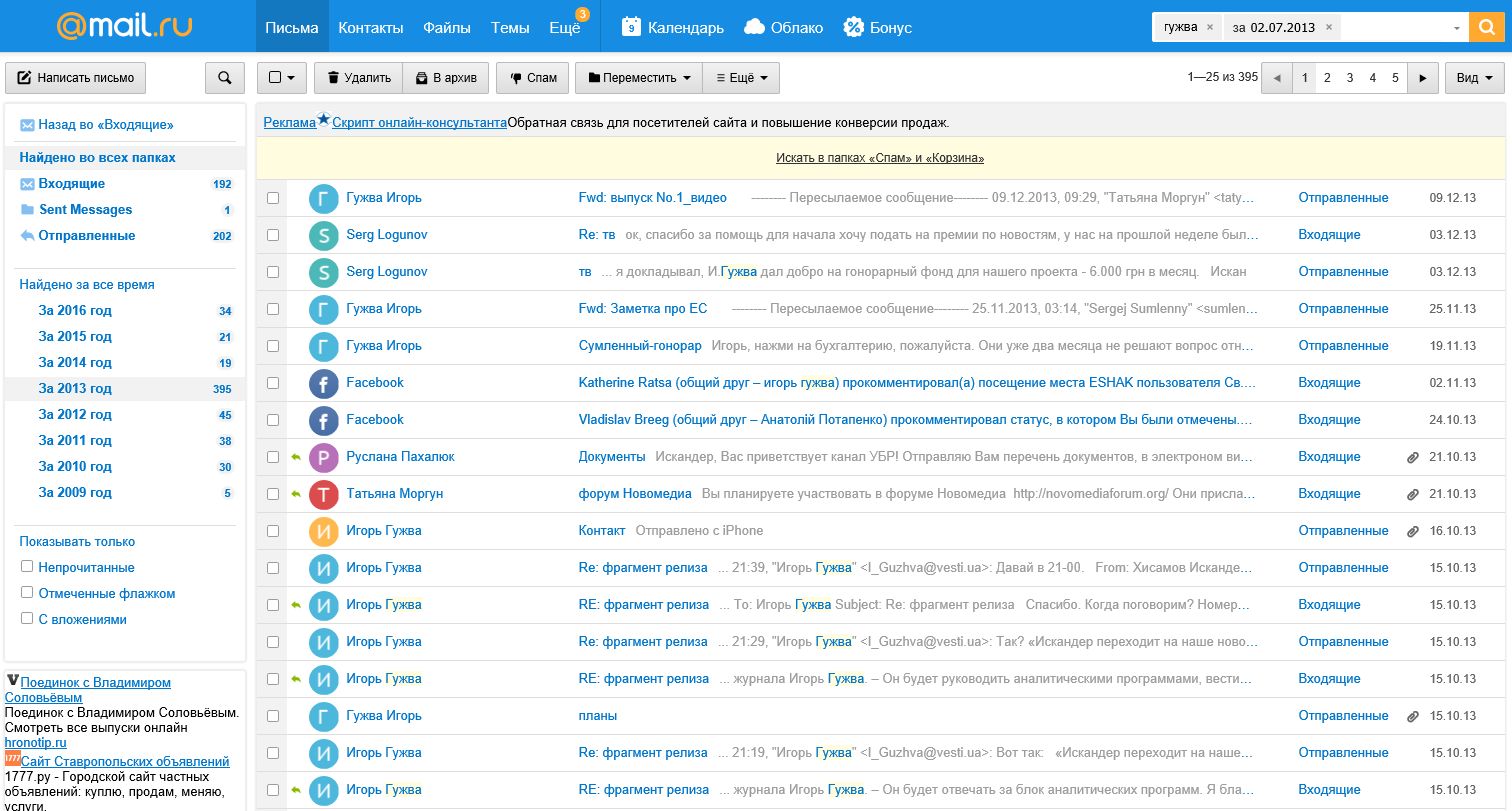 The most active period was in 2013, the year when Huzhva again left Ukraine and tried to start a career in Moscow. Even though there was no journalistic job for Huzhva in Moscow, a new field of operations awaited him in Ukraine. He became the owner of Media-Invest Group holding company, which soon launched the free Vesti newspaper, Vesti FM radio station, Vesti. Reporter weekly, and UBR TV channel. From an ordinary journalist, Huzhva suddenly became one of Ukraine’s media tycoons in a breathtakingly “quick takeoff” rasing questions about the sources of its funding.

After buying the satellite UBR channel in June 2013, Huzhva became its CEO. He immediately invited his old friend Khisamov to join the team and work as a presenter of Itogi Nedeli (Recap of the Week) program. 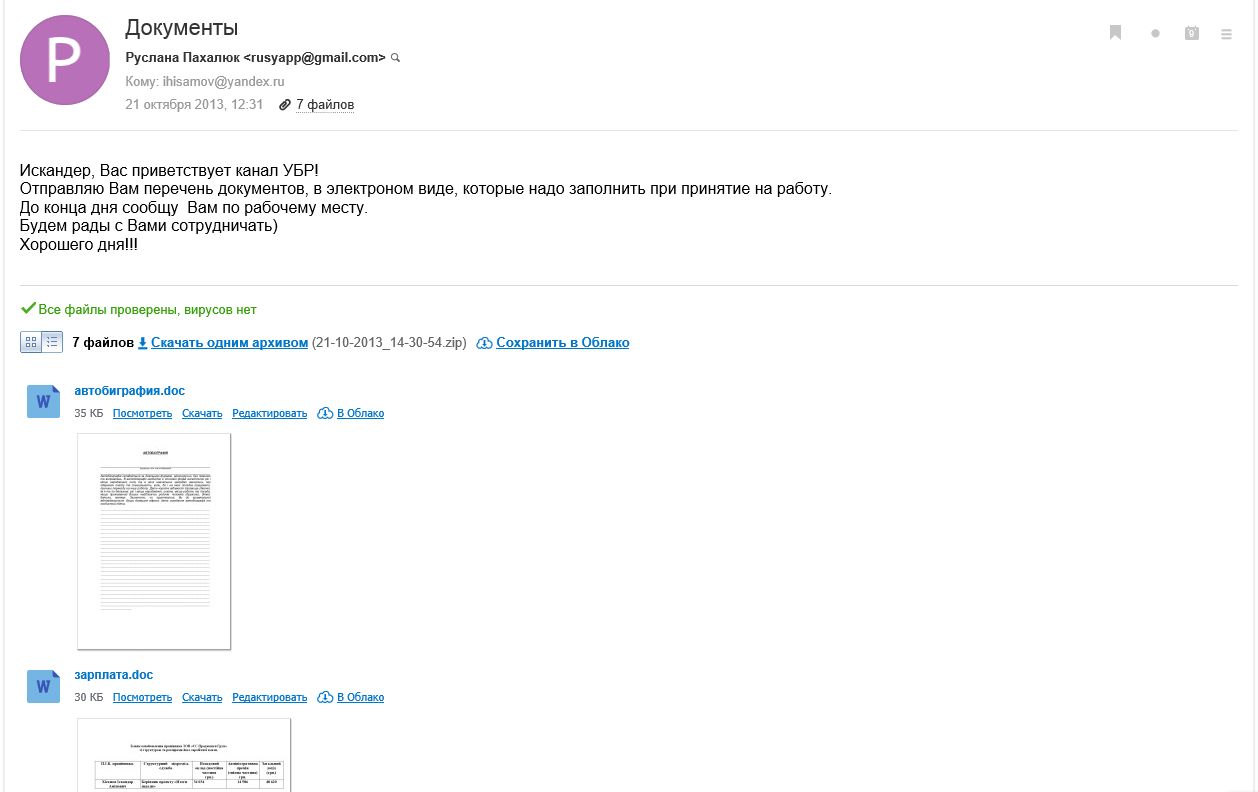 Let us look at some interesting figures related to the financing of Russian projects. For example, Khisamov was paid about UAH50,000 [Ed.: about USD6,000] per month in 2013 by an unknown channel with a negligible audience. It is clear that the money for such lavish salaries could not have come from the company’s advertising revenue?

Six months later, UBR producer Serhiy Lohunov bragged of the channel’s first success: still not much, but at least something to report to the Russian sponsors. 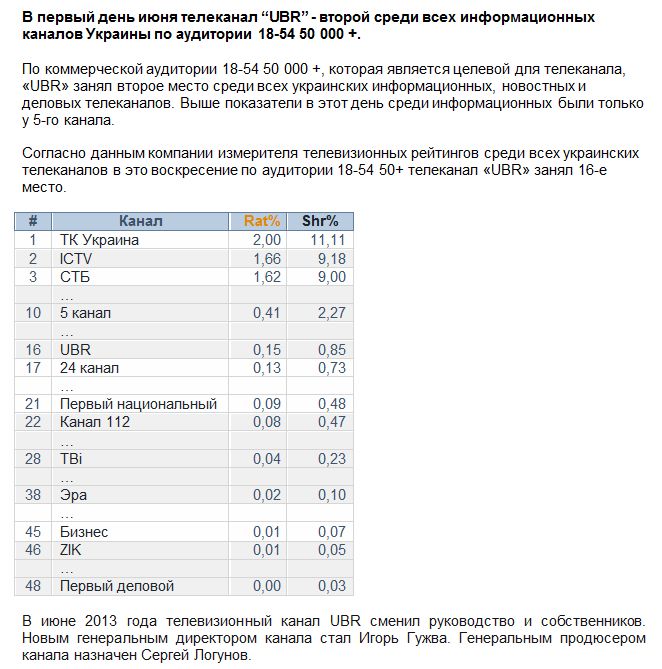 However, the news channel did not click. In summer the channel got a warning for live syncs with Russian terrorists. However hard they tried to mimic Ukrainian mass media, the war dotted all the i’s.

In 2015, Khisamov worked as chief editor at Radio Vesti.

Below is the payroll of Vesti. Reporter project for 2013.

It should be noted that Khisamov’s projects also tried to earn from advertising, mostly in cash. 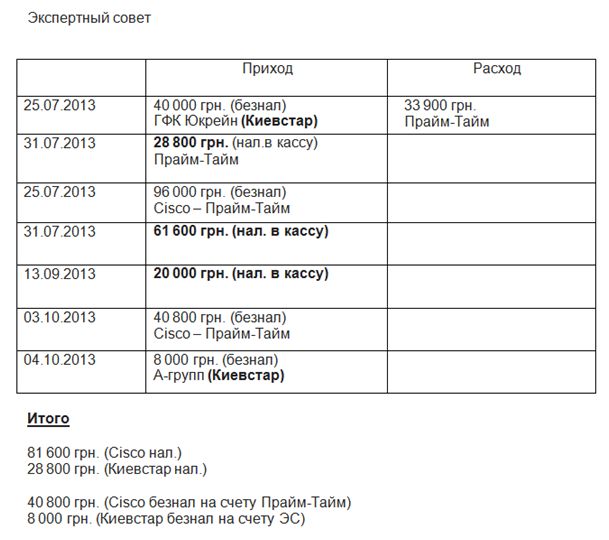 (This apparently refers to his Expert Advice analytical center).

Projects changed, and Khisamov changed with them:

In 2015, he decided to get involved in another project, this time taking into account all the propaganda errors made by UBR or Vesti. Strana.UA, another news portal managed by Iskander Khisamov, came to life in February 2016.

No matter how hard they tried to keep to the “80% of objectivity to 20% of propaganda” principle, but Kremlin’s fingerprints could still be seen all over it.

However, on March 5, 2016, Khasimov very curtly asked Huzhva to dismiss him. Apparently, such turn of events startled Huzhva, he kept asking for the reasons of such abrupt and unexpected departure. 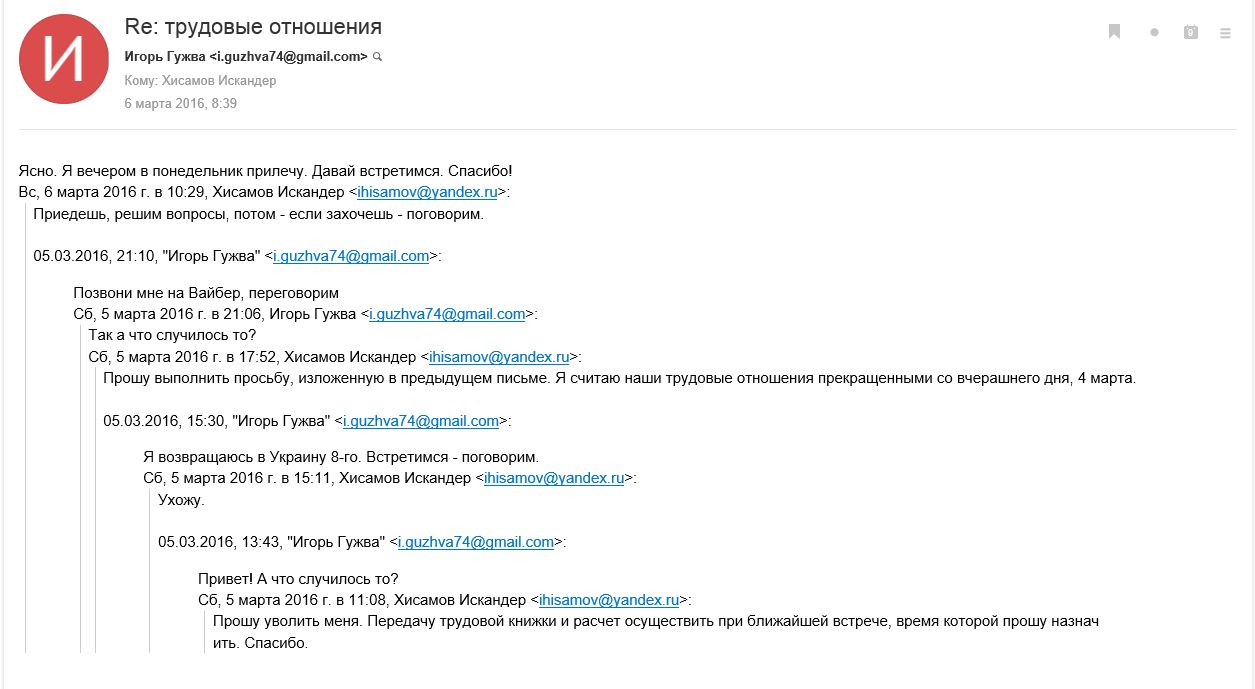 Soon, however, Khisamov takes controls at Ukraina.RU website, the Russian government-sponsored project dedicated to Ukraine. The tasks and the content are the same, only now it’s an officially Russian resource.

Immediately after his resignation from Vesti, Khisamov began recruiting journalists from Ukraine. 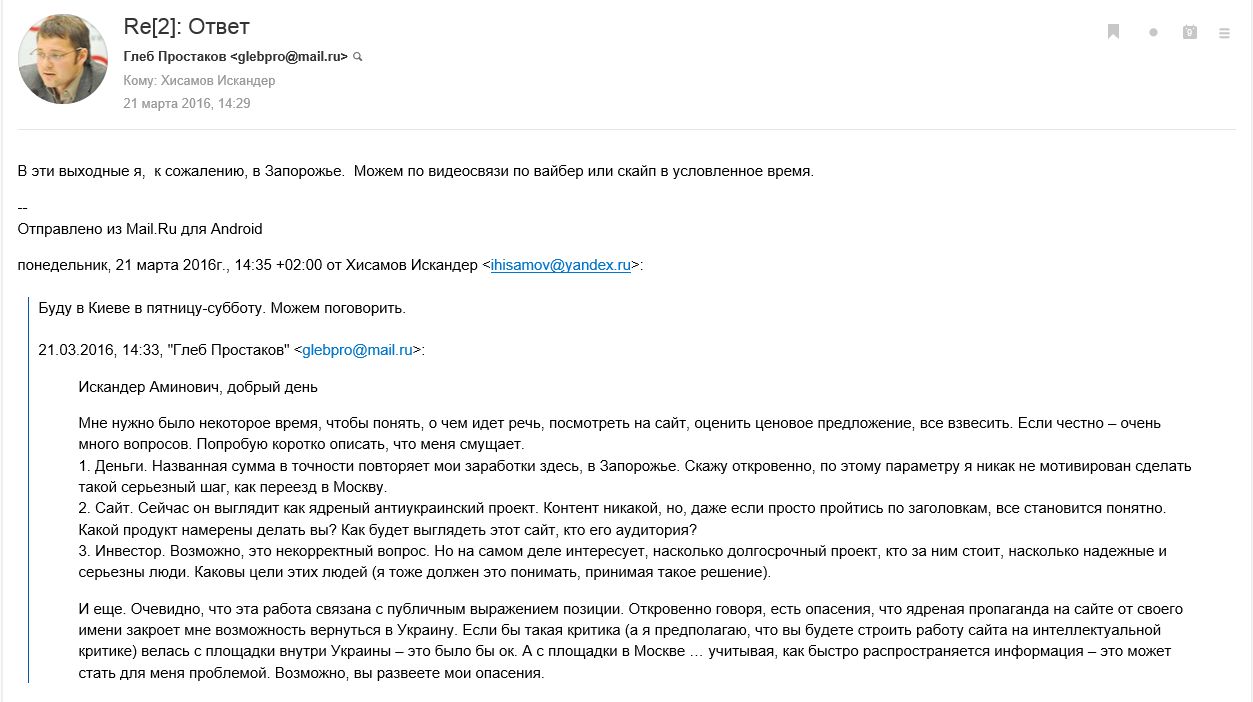 Everyone understands in what terms the new project is to describe Ukraine:

“And one more thing. Obviously, this job is related to public expression of my position. Frankly, I’m afraid that straightforward propaganda on the website in my own name will make it impossible for me to return to Ukraine. If such criticism (and I suppose that you will base the website’s work on smart criticism) was carried out from inside Ukraine, it would be ok. But from Moscow… considering how quickly the information spreads, it can become a problem for me. Maybe you could dispel my reservations.”

Journalists are very realistic or rather cynical people and are well aware of what they write and for whom they do it.

Projects pop up in the Ukrainian media space one after another that employ openly pro-Russian journalists. Some projects are more straightforward, while others try to mimic objectivity. Such projects always have good financing and are very well off. Why such projects are still operating in Ukraine remains an open question.

Disclaimer:Evidence data was exclusively provided to InformNapalm by the hacktivists of the Ukrainian MadUkrop$_Crew community for analysis and processing.  InformNapalm Community bears no responsibility for the sources and origin of the data.

No Responses to “Russian media lobby in Ukraine: Vesti, UBR, Strana.UA and Ukraina.RU”