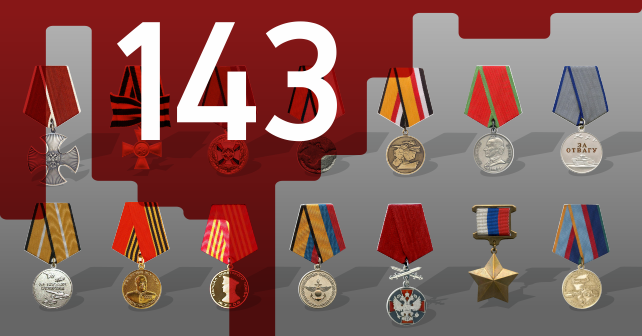 InformNapalm volunteer intelligence community presents updated data on the awards of Russian military, received for participating in the occupation of the regions of Ukraine and Georgia, as well as for the execution of criminal orders by Russia’s top military leadership in the Donbas and Syria.

We have systemized previous OSINT investigations published by InformNapalm and containing information about the combat decorations of Russian military men for operations outside the Russian Federation. We updated the database and prepared new infographics.

We would like to remind you that on October 3, 2016, InformNapalm presented the awards database of war criminals from the Russian Army, with a video overview and infographics, which featured 79 servicemen.

These InformNapalm investigations are based on the data about the state and departmental military decorations of the Russian Federation, received by Russian servicemen and civilian personnel. Such awards have mostly been granted for participating in the undeclared wars which Russia conducts against Georgia, Ukraine and Syrian nation. The renewed database was complimented with 64 awards, and now it contains 143 orders and medals, awarded for military merits. Including: 95 awards for war crimes in Donbas, 16 for the occupation of the Crimea, 5 for the occupation of the regions of Georgia and 27 for the murders in Syria. 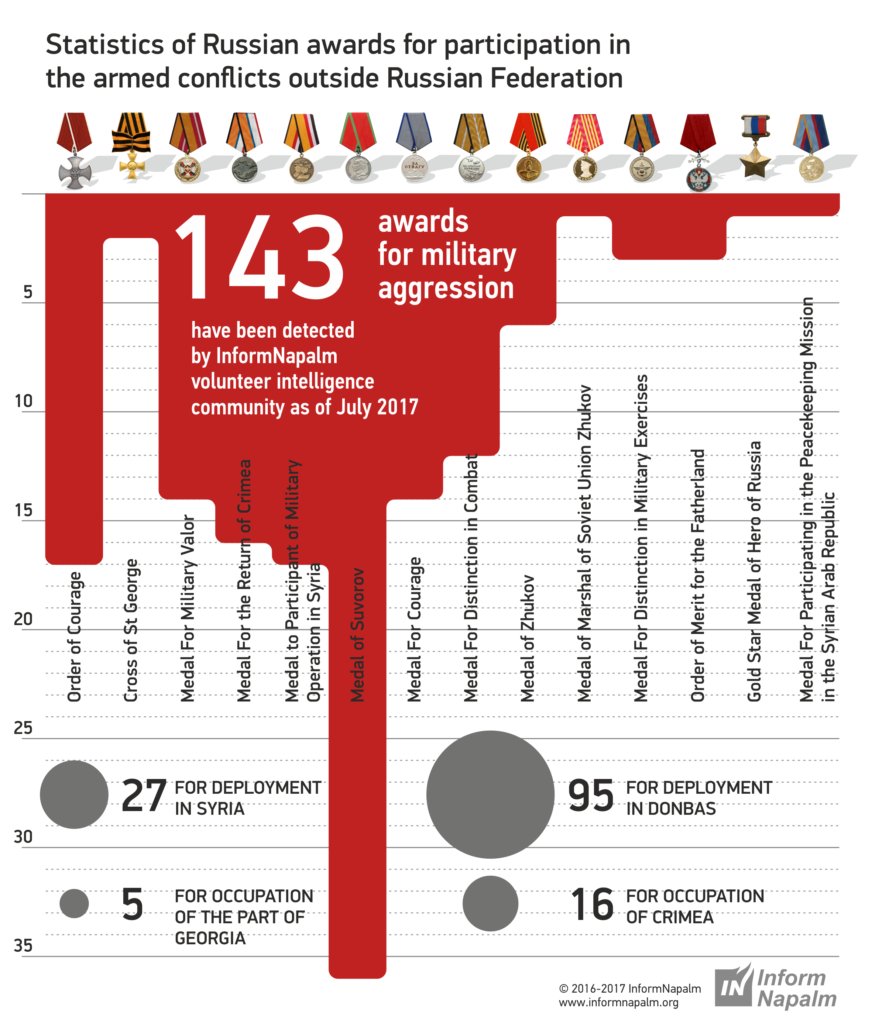 These war criminals usually receive such awards as the Medal of Suvorov, the Medal For Military Valor, Medal For Distinction in Combat and Order of Courage. In most cases we know not only the names of recipients, but also award numbers, dates, numbers and other details of relevant decrees and orders. In a number of cases, there are additional data indicating specific merit, for which the servicemen were rewarded with various awards.

The main source of information for us are the social media pages of Russian servicemen and their families’ members, where they show photos of awards and certificates to them bearing many relevant details (numbers in the register, numbers and dates of decrees (orders) of the Commander-in-Chief or the Minister of Defense of the Russian Federation). Often, under such photographs there were comments and congratulations connected to the awards which gave us additional clues.

It is noteworthy that before Russia unleashed the war against Ukraine, the information about the awards and the materials of the registers had been publicly available, but since 2014 everything has changed. Probably, the Russian military and political leadership realizes that any evidence of war crimes, including such indirect indications as combat decorations awarded in peacetime, could also supplement the materials of future tribunals.

The presented systematized information is important not only for the general public. It will also be useful to journalists, analysts and international organizations as an evidence base for the subsequent investigation of war crimes of the aggressor state.