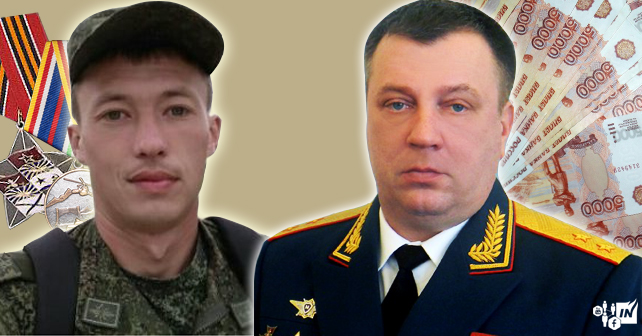 The photos of award certificates in the social accounts of Russian servicemen help reveal their participation in war crimes outside of Russia. They also expose the corruption leading up to the top officers of the Russian army.

The experience of OSINT investigations by the international intelligence community InformNapalm shows that state and departmental awards function as some of the most important clues in the search for Russian war criminals. These are awards given ‘for combat services’, as well as unofficial so-called anniversary medals indicating the participation in military adventures of the Kremlin.

From March 2014 to August 2017, InformNapalm volunteers collected more than 170 cases of official awards issued to Russian servicemen. Among them, there are over 116 medals and orders awarded for war crimes in the Donbas, 19 – for the occupation of the Crimea, 6 – for the invasion of Georgia and 30 – for the murders in Syria. Information on all awarded war criminals has been consolidated in a single database, and is also available as infographics and videographics.

While the Kremlin has classified all the data of the Russian registry on awards since the beginning of the undeclared war against Ukraine, our lists serve as an evidence of Russian military participation in hybrid conflicts. They are already in demand of some international investigation organizations and competent services of other countries.

In this publication, we show the recipient of a departmental medal of one of the units in the Southern Military District of the Russian Federation. With his bragging about the award he exposed the deputy commander of the military district. 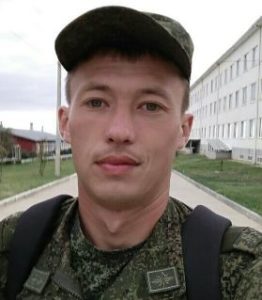 We already spotted Badambayev in the past. In particular, his name under the number 25 was featured in OSINT-investigation from December 17, 2015. There we provided the personal data of 29 servicemen of the 291st Artillery Brigade of the Southern Military District who were spotted in Syria. Soon after that publication, most of the listed persons deleted or edited their public accounts. However, in May 2016 Badambayev was back, boasting on his page about the awards that had been absent in his album previously:

Note: it follows from the new circumstances that Badambayev, whom we identified among the artillerymen of the 291st Artillery Brigade in Syria, was a serviceman of the Signal Battalion of the 136th Motorized Rifle Brigade attached to these artillerymen. 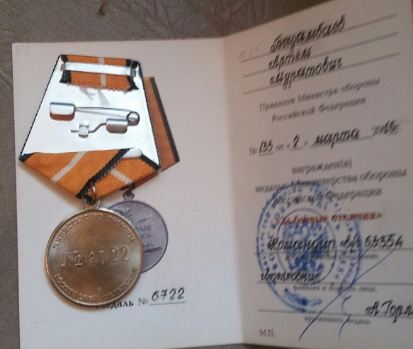 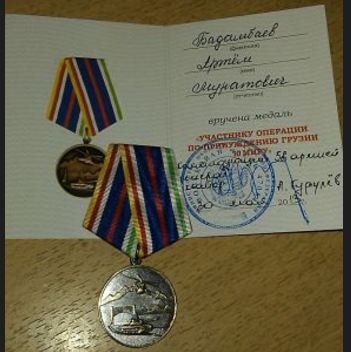 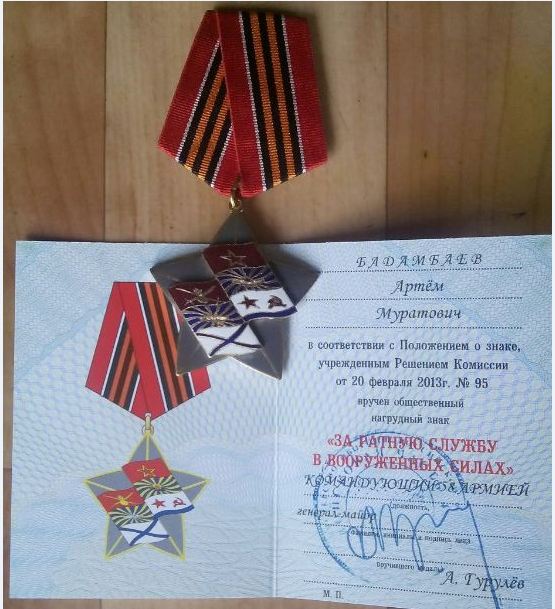 “The Call”, a provincial Russian newspaper of Lyambrinskiy Rayon in Mordovia at the end of July 2017 described ‘Badambayev’s heroic record’, namely his participation in the wars in Georgia and Syria. The article mentions another of Badambayev’s ‘awards’: “For the service in the Caucasus” chest badge, again available for sale for 1700 rubles. Interestingly that even Russian phalerists, experts and collectors have not reached agreement on the origin of this award. 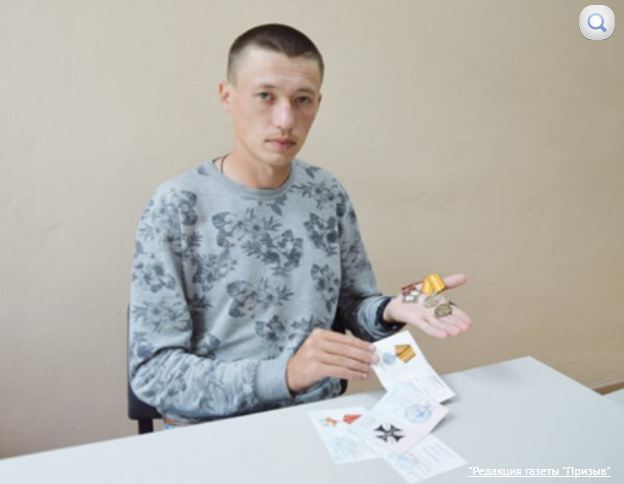 Badambayev’s name is listed in the orders from the package of documents handed over to us by the Ukrainian Cyber Alliance. The order of the commander of military unit 63354 94-order-from-30.04.14g., paragraph 6: “To consider arrived from an assignment and having started to fulfill their duties: No. 33. Senior Sergeant Badambayev Artyom Muratovich, commander of the radio station R-149BMR of the control platoon of the advance control post of the signal battalion, in Ulyanovsk since 30.04.14”

The signature and the seal of the army commander on the certificates of unofficial awards is nothing else but a personal initiative. The provisions for these fake awards state that commanders of military units, armies, or districts have the right of award. But why do this five years later? Moreover, in 2008 Gurulev had nothing to do with the Southern Military District. It looks like a clear mutual interest of the awarder and the awardee – some exchange of goods or currency, one of the corruption schemes that are widespread among Russian top commanders. According to our data, this practice is not new to the Russian Army. The officers squeeze soldiers and contractors in all possible ways, including the issuance of positive evaluations, various certificates and excerpts from orders, award and discharge recommendations, etc.

In this view, let’s see who is this General Gurulev, who signed the certificates of Badambayev’s unofficial awards. 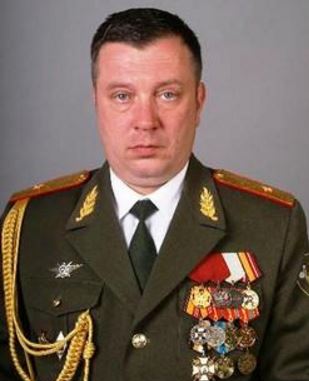 In 2010, after graduating from the Academy of the General Staff, Major-General Andrey Viktorovich Gurulev was appointed Chief of Staff of the 58th Army of the Southern Military District. In 2012, he became the commander of this army. On June 10, 2013, criminal proceedings were initiated against him (see references 1, 2, 3, 4). However, soon Russia unleashed the war against Ukraine, and the unlucky general was offered a chance to get a pardon. Criminal proceedings against Gurulev were soon dropped, and in December 2014 he was promoted to the rank of Lieutenant-General.

In this context, it is appropriate to recall a recent publication of InformNapalm, 150th Division of the XXI century of Russian Army. Myths and Reality. According to our sources, the situation in the 150th Division is not as rosy as Kremlin propaganda shows. Against the backdrop of PR campaigns that advertise the growing power of the Russian army and the creation of a new attack monster in the form of the 150th Division, hundreds of contract soldiers feel deceived there. Military hazing happens often in this division, and its commanders of all ranks don’t hesitate to earn extra cash from their personnel as well as from the tangible property.

Of course, the district commanders, especially the patron of the 150th Division General Gurulev have to be aware of the situation in the showpiece division, especially with the almost non-stop inspections happening there. Apparently, the new division serves as a milk cow satisfying the corrupt ambitions of Gurulev and other top military officers of the Russian Army.

The case of Badambayev is not unique. The signature of General Gurulev was also found on the award certificate to the “For military service in the Armed Forces” badge that was given to the contractor of the 136th Brigade Vladislav Zemlyanukhin. Our community wrote about him in our investigation in April. And we saw Russian soldiers bragging about fake awards even before that. For example, the contractor of the 18th Motorized Rifle Brigade Rever, seen in Donetsk, boasted about “Marshal of the Soviet Union Zhukov” anniversary medal, with the certificate signed by the unit commander. The contractor of the 17th Motorized Rifle Brigade Pashinin, seen in Novoazovsk, was awarded the so-called medal “For military valor”.

Together with Badambayev, we identified another awardee, his colleague from the Signal Battalion of the 136th Motorized Rifle Brigade. 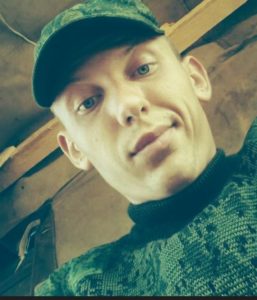 Lakman’s photo albums contain a picture of the Russian Defense Ministry’s “For combat distinction” medal. The number of the award is 6737, and it was issued by the order of the Minister of Defense of March 2, 2016. The award certificate was signed by the commander of the 136th Brigade, Colonel Gorlov.

We also found Lakman’s name in the documents obtained from the Ukrainian Cyber Alliance. The order of the commander of military unit 63354 224-order-from-19.09.14g, paragraph 6: “To assume departed to the battalion tactical training in the Botlikh military garrison since 19.09.14: No. 65. Private Lakman Andrey Viktorovich, squad mechanic (wearable communication devices) of the signal platoon (mobile communication devices) of the signal company (control post) of the signal battalion. Provide with a field ration for 6 days”. 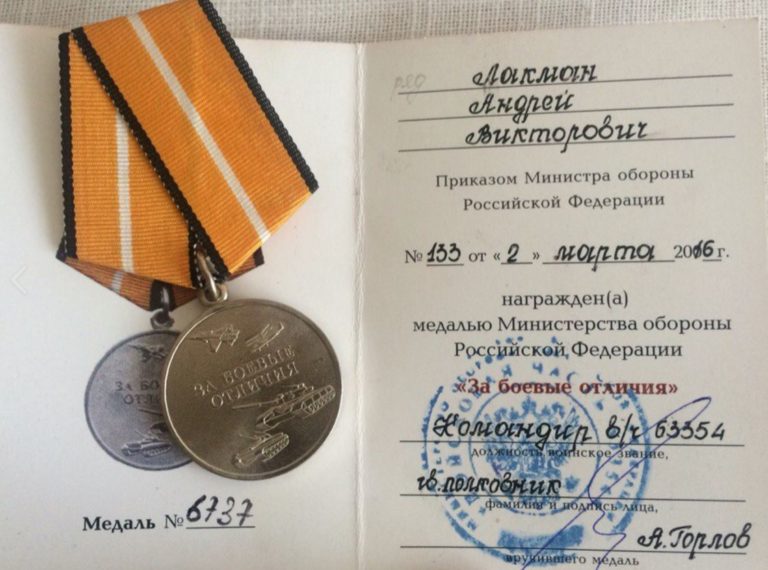 It turns out that there are two identical awards for Syria with the registration numbers 6722 and 6737, which were handed over to the servicemen of the Signal Battalion of the 136th Brigade. Given that award documents must comply with a strictly defined format and sequence, we can be certain that at least 15 signalmen of the 136th Brigade were awarded the medal “For combat distinctions” just by the order of March 2, 2016.

We remind you that the Signal Battalion of the 136th Brigade was already involved in a scandal. In particular, an investigation based on the material obtained by InformNapalm from the Ukrainian Cyber Alliance identified the signalers of this unit in the occupied part of the Donbas: Signal troops of Russian Army’s 136th Brigade in Donbas: lists, documents, orders (photos).

It wasn’t only the update of the database on ‘awardees’, based on the results of this investigation. The 136th Brigade will be included in the list of the Russian army and navy units, identified by InformNapalm in Syria, which already contains 19 of them:

This publication was prepared by Irakly Komakhidze specially for InformNapalm.

and get quick information about new materials.