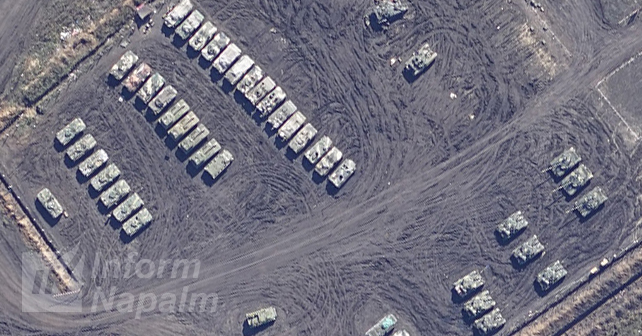 Volunteer aerial reconnaissance team handed over to InformNapalm community new images of a large build-up of weapons and equipment amassed by the Russian occupation forces in Donbas. InformNapalm OSINT investigators analyzed the images and identified all pieces of the weaponry and equipment. UAVs captured on photo a reinforced battalion tactical group of the Russian occupation forces. Several models of the spotted military equipment clearly point to their Russian origin. 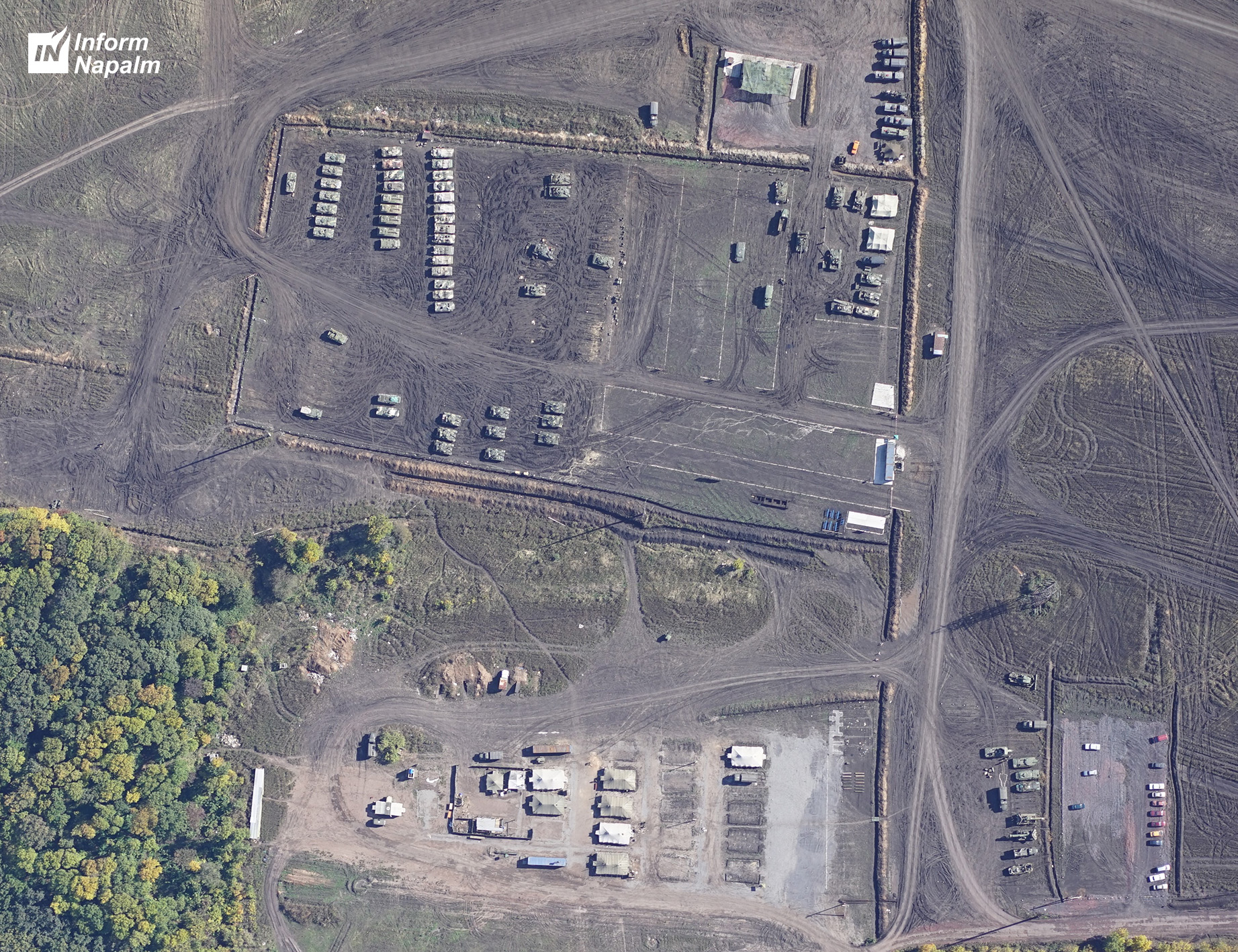 Another image also shows Russian truck mounted wound dressing room (AP-2) that earlier appeared in OSINT investigation of InformNapalm when it was spotted 3 km from the industrial zone of Avdiivka in August 2016. However, the biggest surprise came when we saw two UR-77 Meteorite mine clearing vehicles that remain exclusively in service of the Russian Army. Besides mine clearing, UR-77 is also used to defeat manpower in the fortified building ruins. This additional use of the equipment was documented in the Second Chechen campaign and during the assault of Donetsk Airport by Russian forces in Donbas. UR-77 were also used during the assaults of fortified positions in Jobar District of Damascus (Syria). 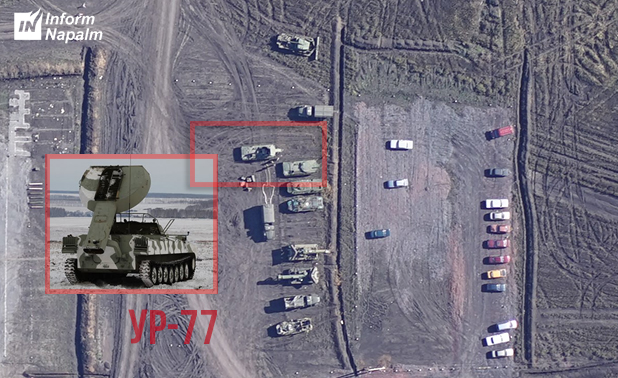 In addition to identification of the equipment and detailed analysis of the original aerial images,
InformNapalm also found supporting photo and video evidence on the social network pages of Russian militants who were stationed at the sector close to the military firing range near Chistiakove.
The photo shows a convoy of 20 tanks spotted in the specified area. 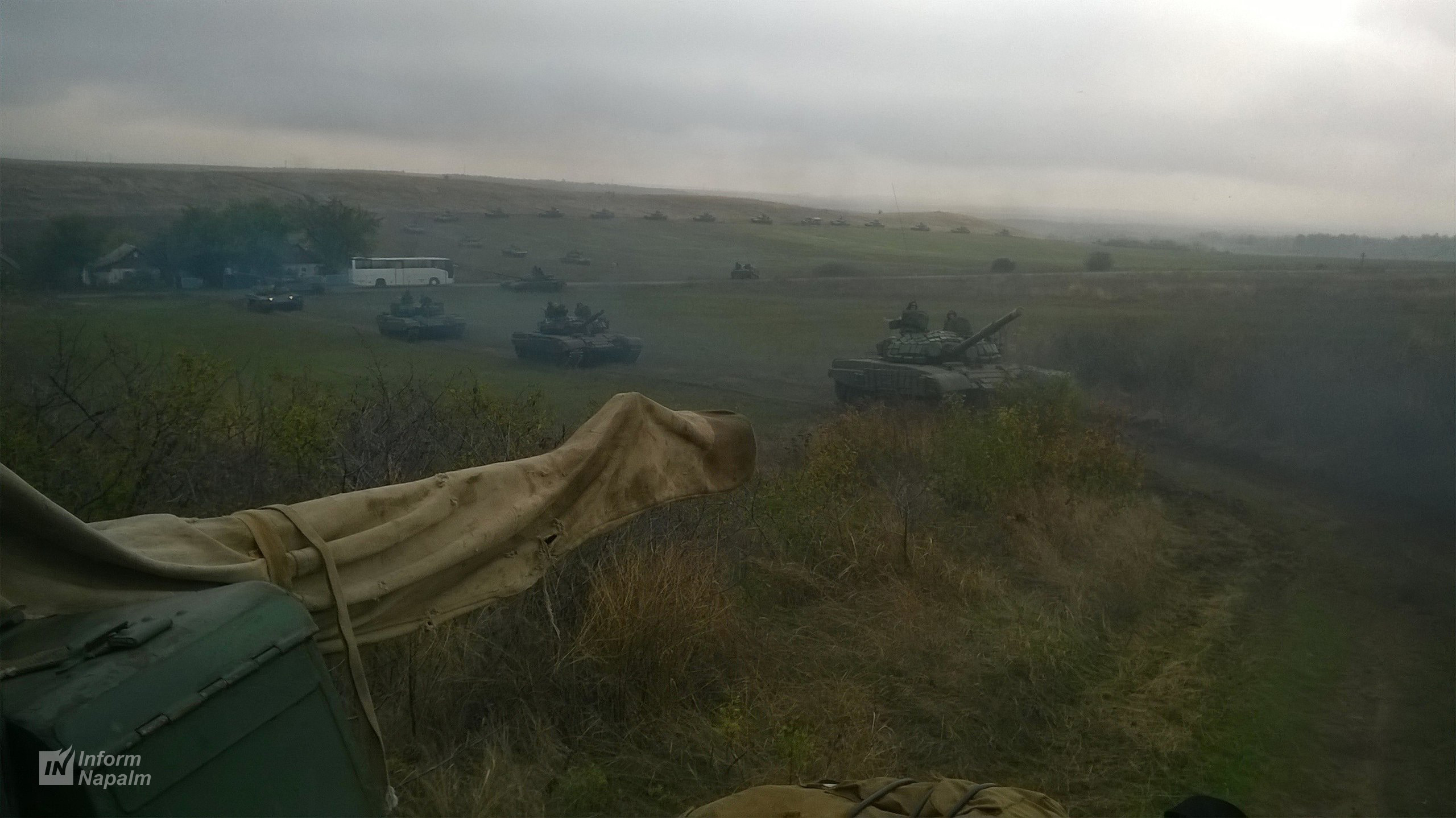 These aerial images prove that neither both Minsk agreements, nor any other sort of international treaty can appease the aggressor. Russia continues to build up weapons and equipment on the occupied territories of Luhansk and Donetsk Oblasts of Ukraine; and only firm consolidated stand of the entire international community, economic pressure on Russia and Russia’s deprivation of the veto right
in the UN Security Council can make a difference.

Earlier this month InformNapalm volunteer intel community had released a report “Weaponry of the Russian Federation in the War against Ukraine” that was later presented by Ukrainian parliamentary delegation at PACE autumn session (October 10-14, 2016). This report summarizes overwhelming evidence proving ongoing supplies of modern military equipment coming from Russia to the Russian-terrorist forces in Donbas. To function properly most of the types of equipment mentioned in the report need specially trained human operators, i.e. professional military servicemen, which suggests that Russia sends them to Ukraine as well.

On these grounds, there seems to be no compelling reason to argue that Ukraine needs not only economic, but also military assistance from the international community to counter Russian aggression.
Provision of both lethal and non-lethal modern weapons to the Armed Forces and the National Guard of Ukraine can become a significant deterrent to the Kremlin’s ambitions for the creeping occupation of Ukraine and further destabilization of the eastern boundaries of the EU and NATO.