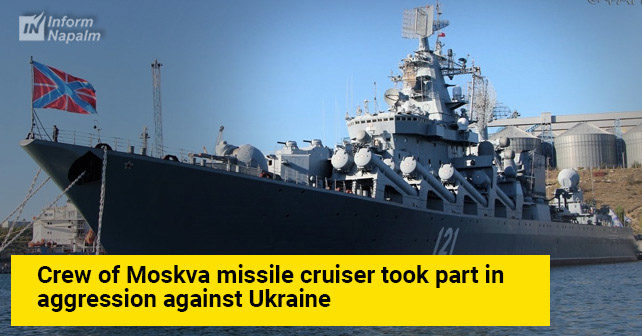 Way back in March 2014, the Ministry of Defense of Ukraine reported that Moskva missile cruiser (MC) was used in the operation to seize Crimea. However, for some reason, the flagship of the Russian Black Sea Fleet did not make it to the list of Russian ships involved in the aggression against Ukraine prepared by the military prosecutor’s office of Ukraine. Was it the lack of conclusive evidence? In the following piece, InformNapalm volunteer intelligence community would endeavor to lay out additional evidence found by analyzing the social media pages of the Russian servicemen. We should like to remind our readers that in mid-November 2019, we also published an evidence base of 32 Russian military units which took part in the invasion of Crimea.

MC Moskva in the Crimea invasion

At the time of the special operation to seize Crimea MC Moskva was part of the 11th Brigade of Anti-submarine Ships (11th BASS). In December 2014, the 30th Division of Surface Ships of the Black Sea Fleet of the Russian Federation was reestablished on the basis of the 11th BASS (1, 2).

On March 5, 2014, the spokesman of the Ukrainian Ministry of Defense Vladislav Seleznev, reported that MC Moskva, accompanied by four support vessels, was positioned at the mouth of Donuzlav bay, thus blocking the exit of the Ukrainian Navy ships. “From land, our ships are ‘covered’ by 20 ‘little green men’,” Seleznev added.

InformNapalm volunteers monitored social media pages of the Black Sea Fleet sailors and found relevant photographs proving the participation of the Fleet’s personnel in the operation to seize Crimea.

He was drafted for military service in the spring of 2011 and served on MC Moskva.

After completing his conscript service, he continued to serve in the Black Sea Fleet under a contract.

There is Singapore on this map, and in Vasyukov’s photo album there are photos taken in that city.

The album also contains a photo of Sri Lankan currency (this country is also indicated on Vasyukov’s “combat service” map).

However, the map is missing a true combat mission in which Vasyukov took part – Russian invasion of Crimea. However, he gave himself away by posting a photo with a medal which is direct evidence of participation in this war crime.

On the right, Vasyukov with the medal For the Return of Crimea. Source – his page on VK social network

The commander of the MC Moskva

During the operation to seize Crimea, Captain of the 1st rank Sergey Tronev was in command of MC Moskva.

In January 2015, Tronev was appointed chief of staff of a Division of Surface Ships.

We should like to draw the attention of the Ukrainian law enforcement authorities to the fact that Tronev is not on the list (1, 2, 3) of military commanding officers of the Russian Armed Forces and representatives of the authorities of the Russian Federation indicted by the Main Military Prosecutor’s Office of Ukraine.

MC Moskva is the only ship of the 1st class in the Russian Black Sea Fleet. It was commissioned in 1983. The ship is in need of repair and modernization, and therefore there was a problem with appointing the flagship for the time of the repairs of MC Moskva. Rear Admiral V. Bogdashin even expressed the opinion that for the time of repairs of MC Moskva the fleet needs a ship of the same rank, because “if there are no first-class ships in the combat lineup, the fleet will actually become a flotilla“.

There were intentions for the time of repairs of MC Moskva to make large anti-submarine ship Kerch the flagship, but it did not work out: the ship had to be decommissioned after a fire on board. Therefore, the 36-year-old MC Moskva remained the only first-class ship in the Black Sea Fleet.

Before the war, the Russians planned to make the fifth Mistral class ship into a flagship. They were planning to buy the ship which was laid down in 2013 in France, but because of the aggression against Ukraine, Russia never received the vessel. In 2016, the Mistral which was intended for the Russian Federation, was handed over to Egypt and named Anwar Sadat in honor of the third president of the country.

The flagship of the Russian Black Sea Fleet has not been included on the list of Russian ships involved in the aggression against Ukraine prepared by the military prosecutor’s office of Ukraine. InformNapalm provided additional evidence proving the participation of the cruiser in aggression against Ukraine. This is corroborated not only by individual evidence of eyewitnesses of the events, but also by the photos demonstrating the receipt of medals for the operation to seize Crimea by the Russian sailors who served on MC Moskva.