Terrorism with a Slight Flavor of Provence: a Groom from Cannes Has a Date with Destiny in Donetsk 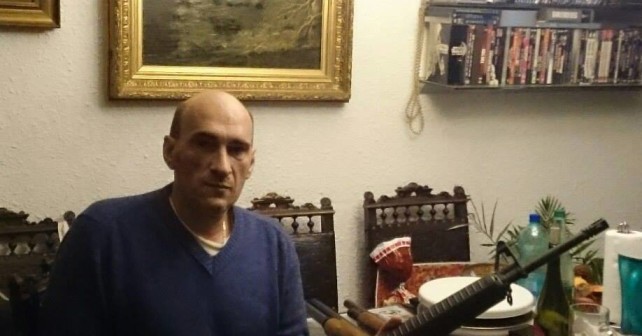 The InformNapalm international volunteer community continues its investigations aimed to identify the foreign mercenaries fighting against Ukraine in the Eastern regions. Majority of these soldiers of fortune are from Russia. At the same time one can meet the EU citizens here and it is really difficult to grasp and understand the logic of their actions.

Meet the 48 years old French Ghislain Lagrega from le Plan de Grasse who instead of enjoying life on the French Riviera has become a terrorist in Donetsk. 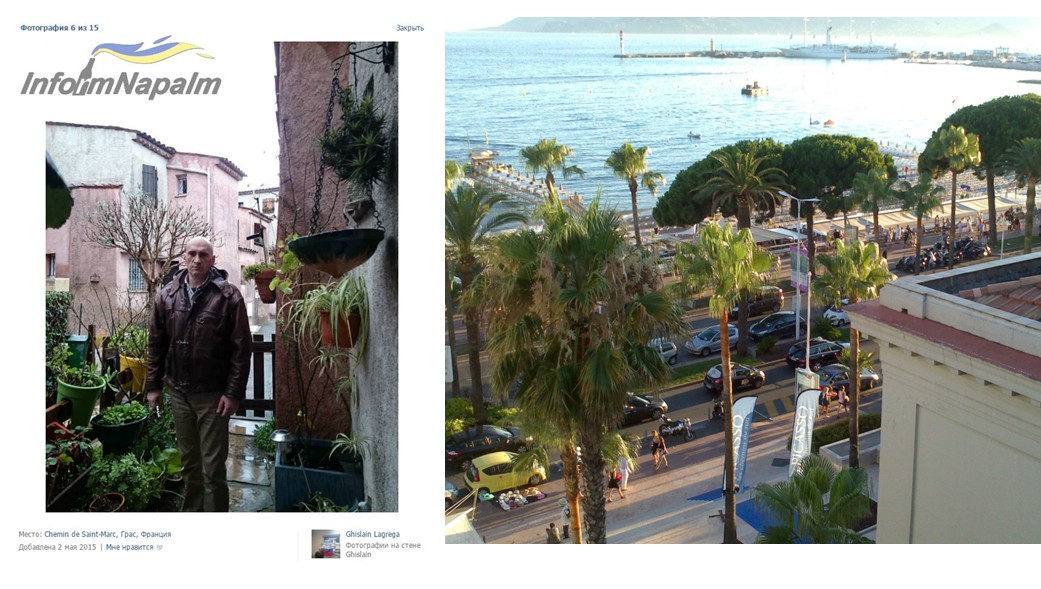 Information about this individual is pretty limited, but we were able to collect a few facts. Based on the updates in the VKontakte social network (profile archive, albums 1, 2, 3, contacts) his date of birth is February 20, 1967, place of birth is La Rochelle, and he lives in Cannes. The contact information:

From May till August of 2010 he worked as a baker in the Cannes restaurant la Guérite îles St Margueritte. There is a number of dating web sites where Ghislain keeps his profile. He probably uses the marriage agencies giving preferences to women from Ukraine, Russia and Belarus. 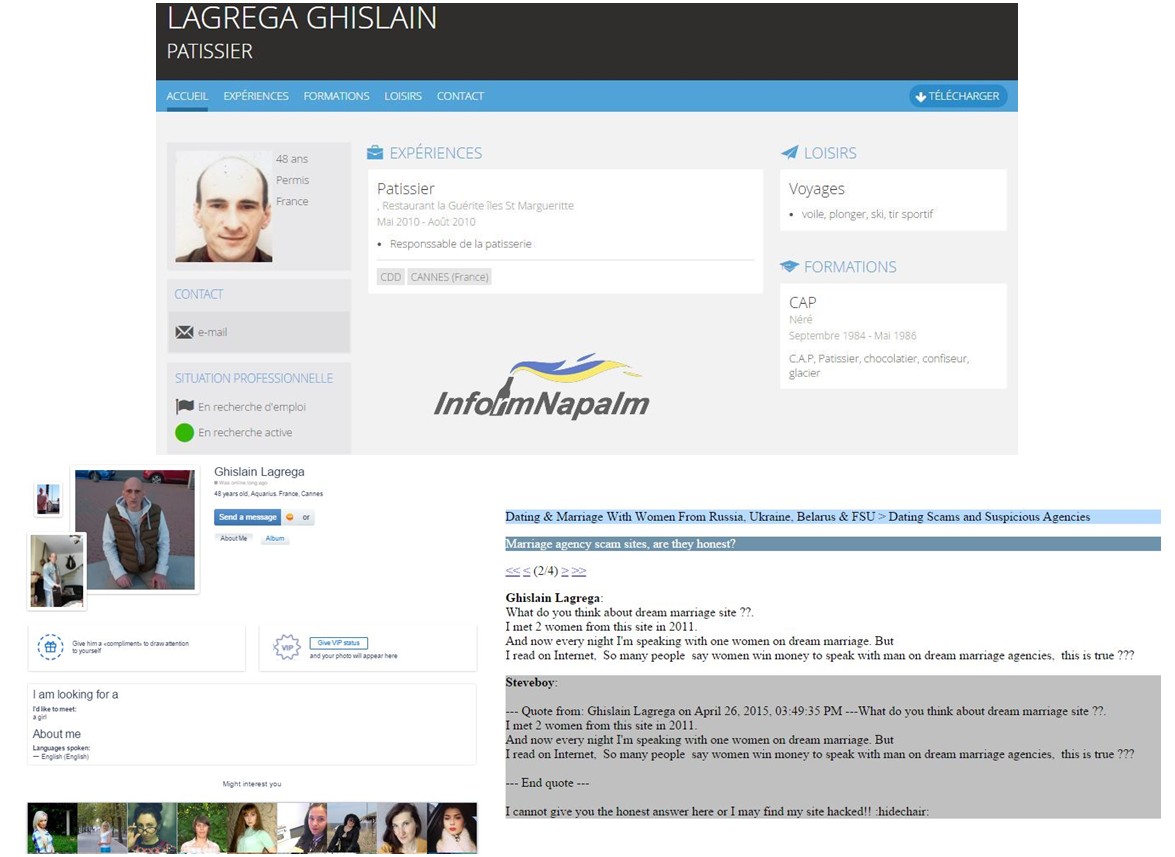 There is a record on the French forum dated October 14, 2015, where he was asking about the visa requirements to travel to Luhansk/Donetsk and the easiest way to reach the destination (i.e. through Russia). Answers stated that the territory is currently occupied and controlled by terrorists and Russian army.  There were also jokes about a possibility to travel to Moscow, go to the conscription military agency and get the armored personnel carrier (APC), AK-74, etc. as well as suggestions to ch0ose Syria rather than Ukraine because of the higher payroll. Ghislain also wrote about his 4 trips to Ukraine and plans to ‘visit friends’ again in November, 2015. 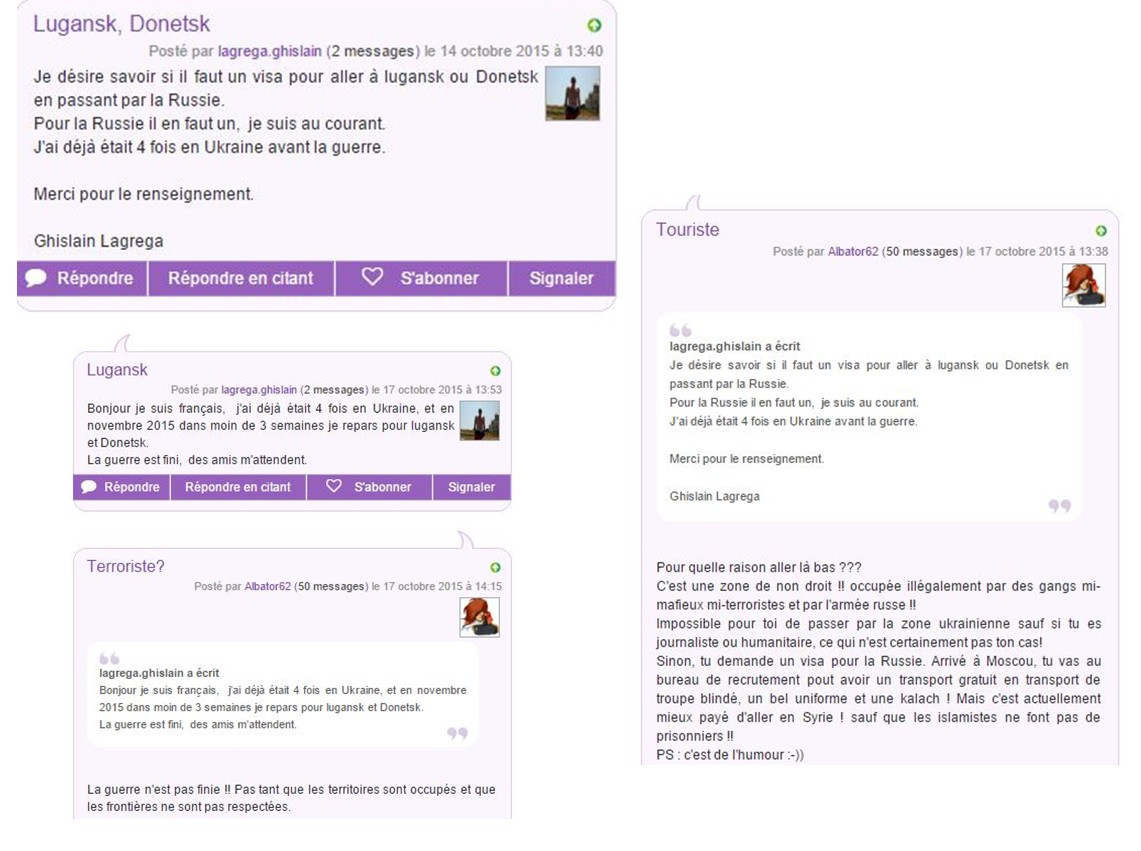 These ‘friends’ can be seen on the Ghislain’s pictures in the VKontakte account where he posed with weapons and the ‘Novorossiya’ symbols in the background. There are also photos of the Donetsk barracks (geolocation helps to identify the place): windows are scotch-taped and sandbagged. According to the very recent photos, the Frenchman is currently in Staromykhailivka village nearby Donetsk (archives of his photos: France – 1, 2 and Donbas – 1, 2, 3, 4, 5). 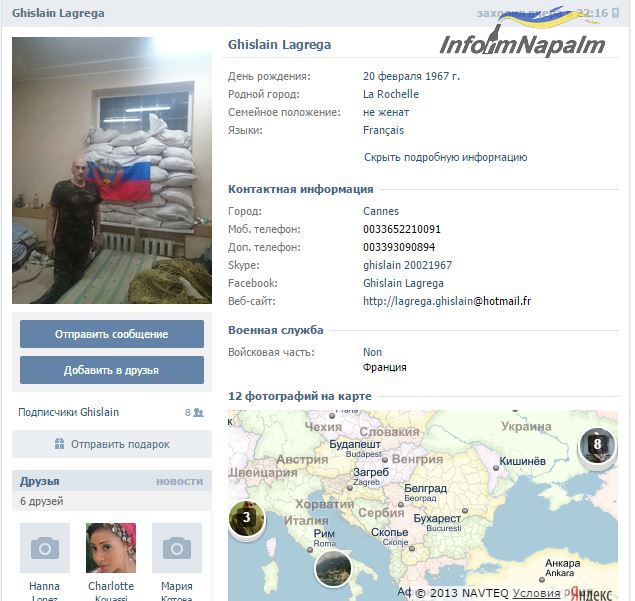 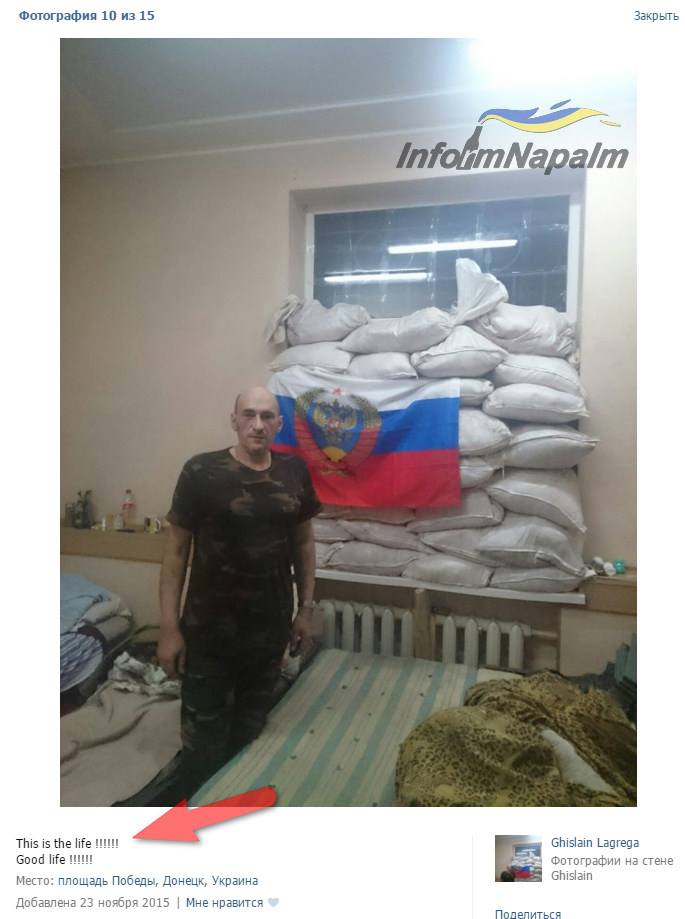 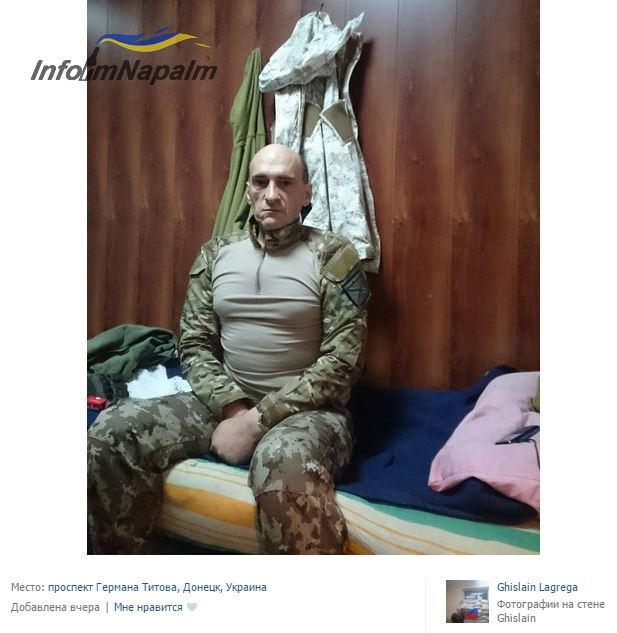 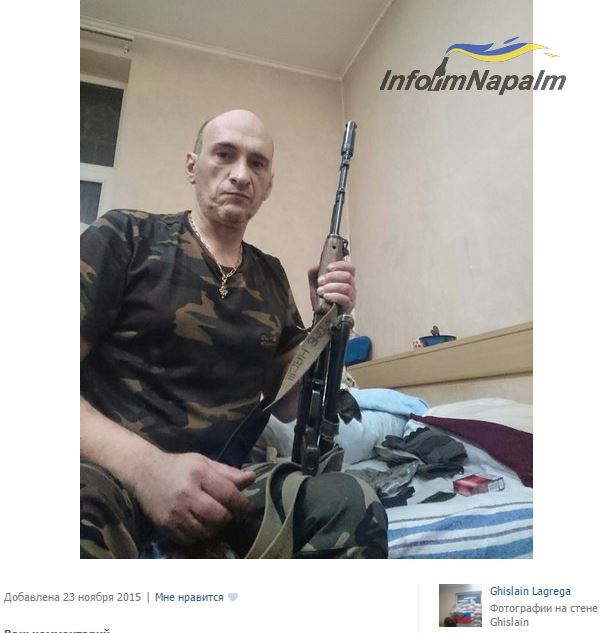 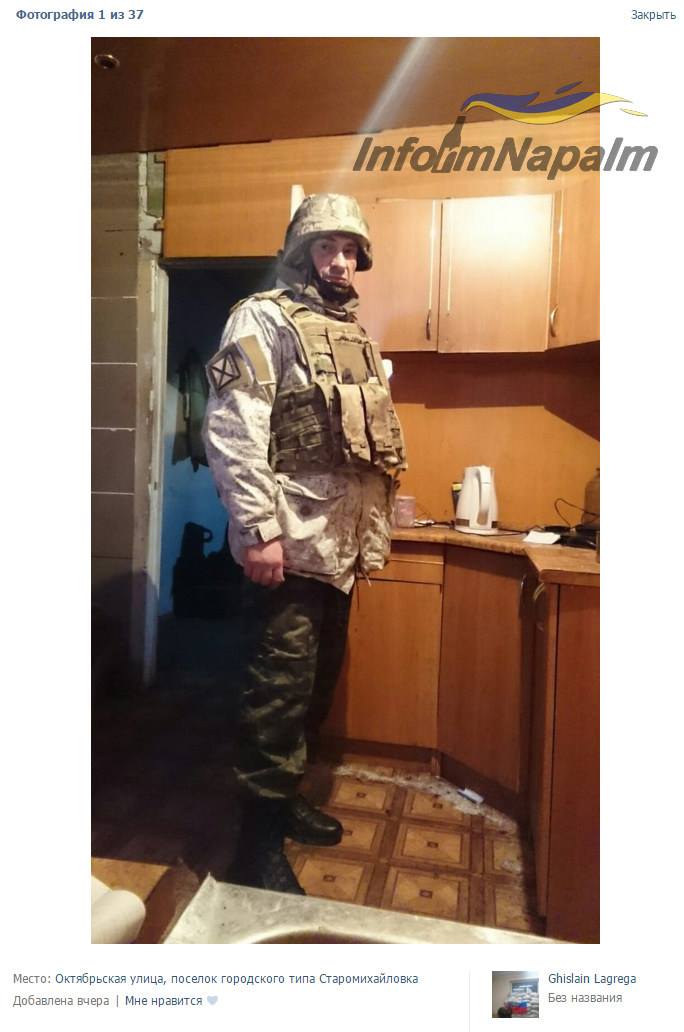 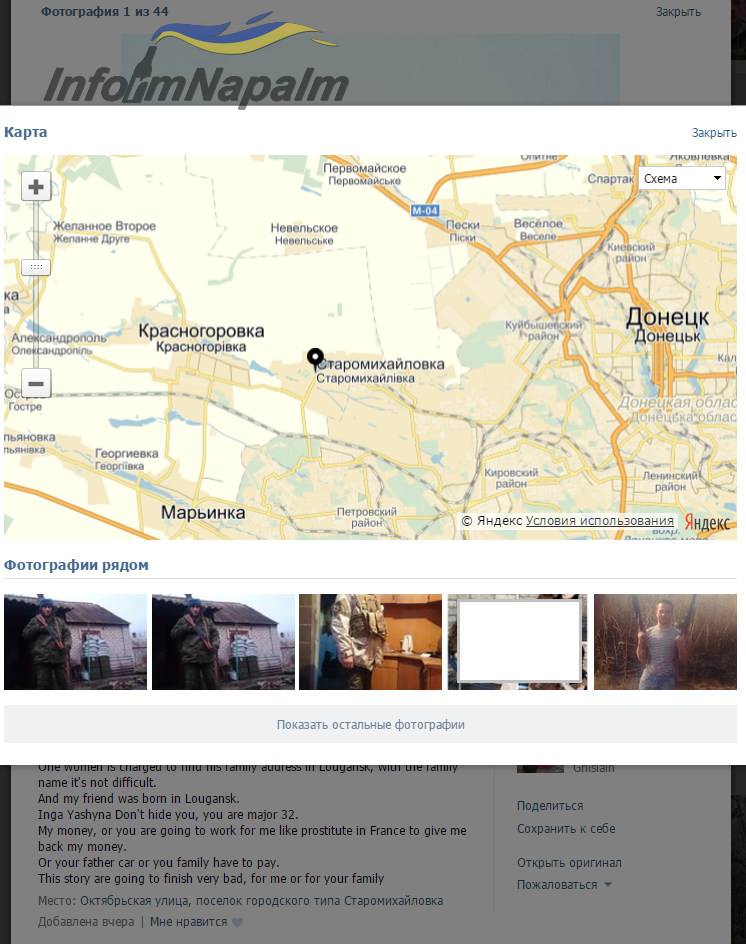 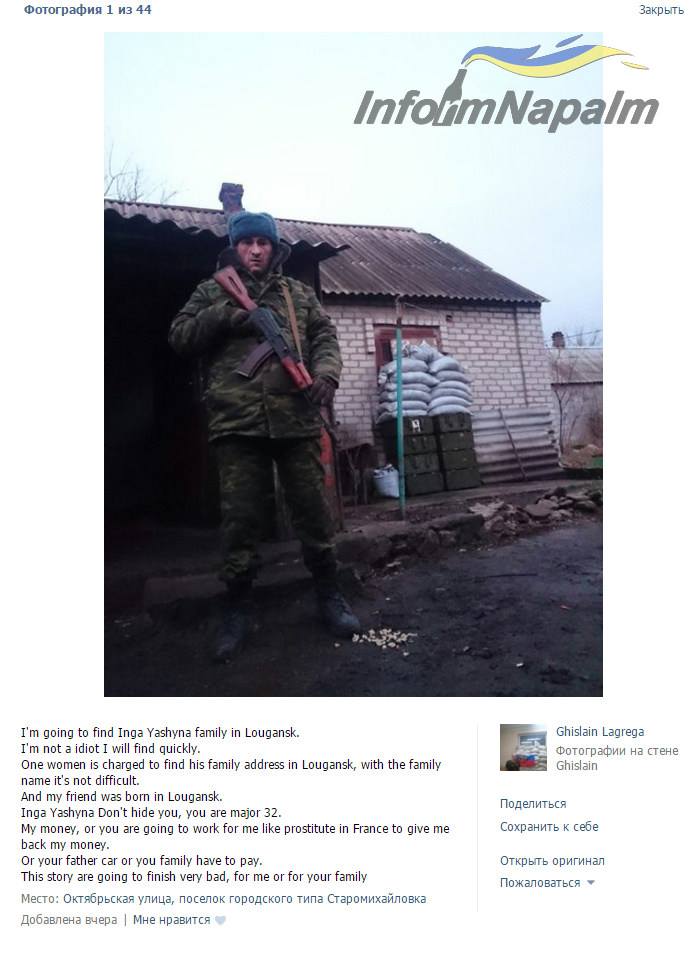 His reasons to come to Donetsk were not clear until he posted a threat to a woman – Inga Yashina, who might scammed him in the past. He used pretty harsh words and requested to return money or ‘work’ in France as a hooker.

A definite profanity here is a fact that Lagrega being a real terrorist fighting in ‘Novorossiya’ keeps a national French flag in memory of the latest terrorist attack and its victims as a Facebook avatar. 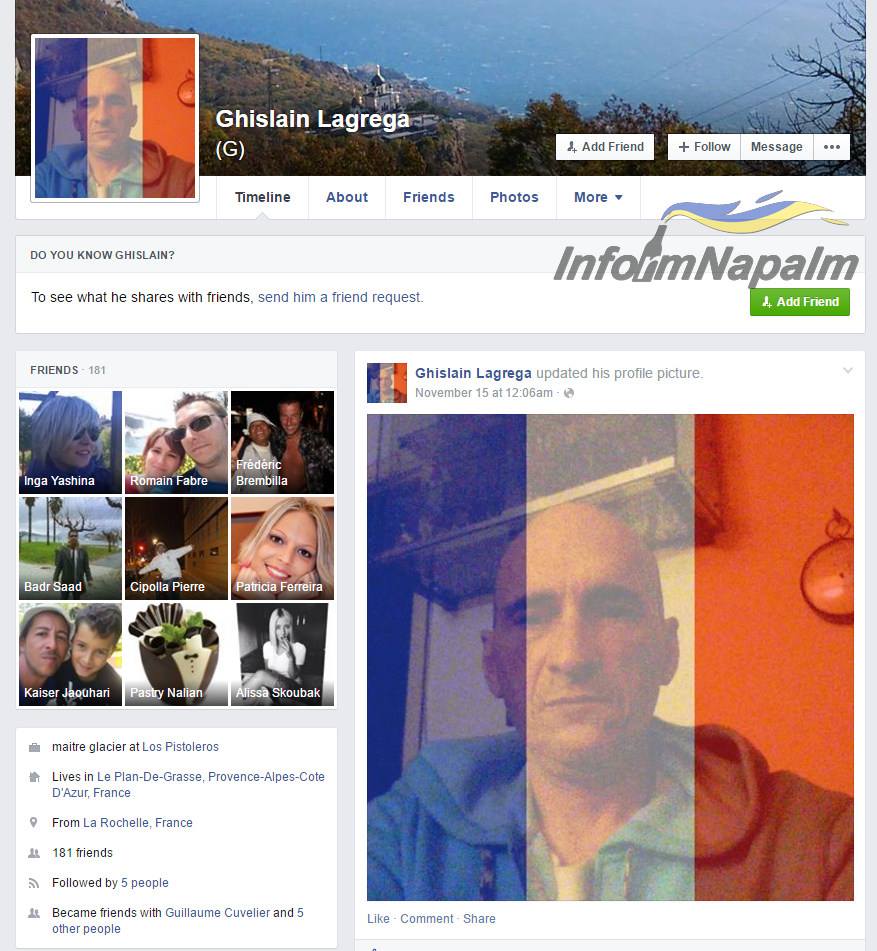 Maybe Lagrega will continue to look for his soul mate using AK, but we hope that sooner rather than later the French authorities and appropriate investigative bodies would notice his illegal presence in Ukraine. There are chances to terminate his solitude after he finds a real ‘family’ in a jail.

This is not the first time when foreigners have joined the Russian side in the war in Donbas. Our team has already published several stories:

No Responses to “Terrorism with a Slight Flavor of Provence: a Groom from Cannes Has a Date with Destiny in Donetsk”