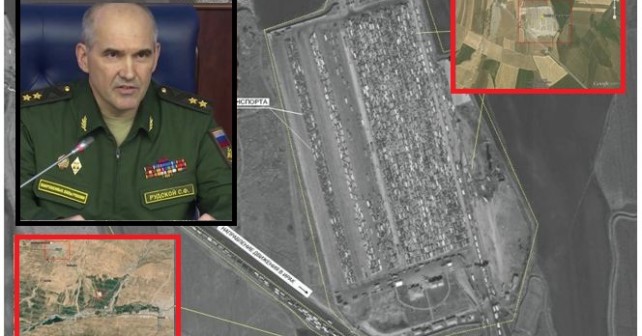 InformNapalm international volunteer community again caught the Russian Ministry of Defense in lie. On December 2, 2015, General Staff of Russia provided ‘evidence that Turkey buys the oil from ISIS’, supporting all this with the visual ‘proofs’. During the briefing of the Ministry of Defense, Sergei Rudskoy, the fresh-baked head of Main Operations Directorate of the General Staff, informed about Turkey buying the oil from ISIS (DAESH) and presented photo- and video evidence.

The representatives of the Russian General Staff largely appealed to the satellite photograph (dated on November 14, 2015) of the parking space filled with the road tankers with smuggled petroleum products. According to the Russians, there are over 3000 petrol tank vehicles and trucks designated to transfer oil to Turkey. 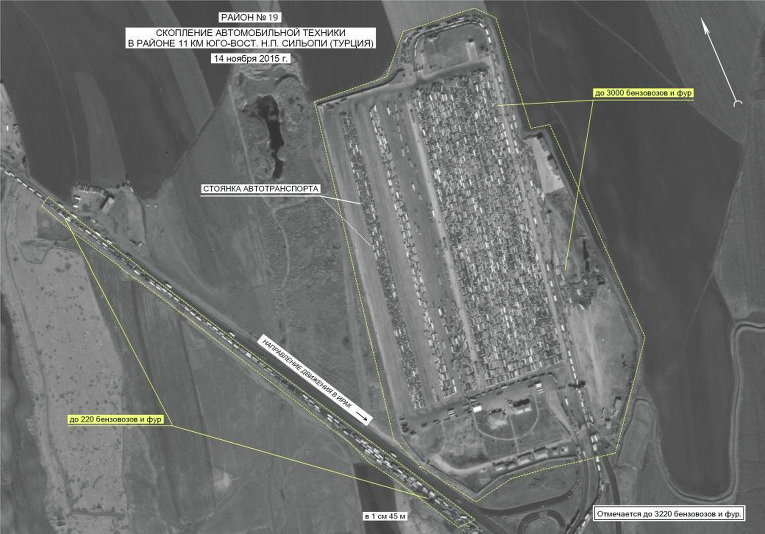 The analysts of InformNapalm team have found this place using GoogleEarth service and made a screenshot of the landscape from the archive of Google Earth pictures from December 12, 2004 (Note: “Show Historical Imagery” tool shows this place pretty blurry, but magnification and placing the mouse cursor / clicking on the button “Save Image” makes GoogleEarth show the date 15.12.2004). The coordinates of this place are 37.1753294, 42.556057. The Turkish name of this place is TİCARİ ARAÇ PARK YERİ (Sıra Bekleme). Judging by the satellite pictures and ‘logics’ of the General Staff of the Russian army, we can conclude that the President of Turkey trades oil with ISIS since 2004, while ISIS (previously ‘Islamic State of Iraq and the Levant’) exists merely since 2013. Eleven years ago this place was also a motor depot, and the number of the vehicles there was not less than on the picture of the General Staff. Also you can see the changes of the structure of this place after 11 years. 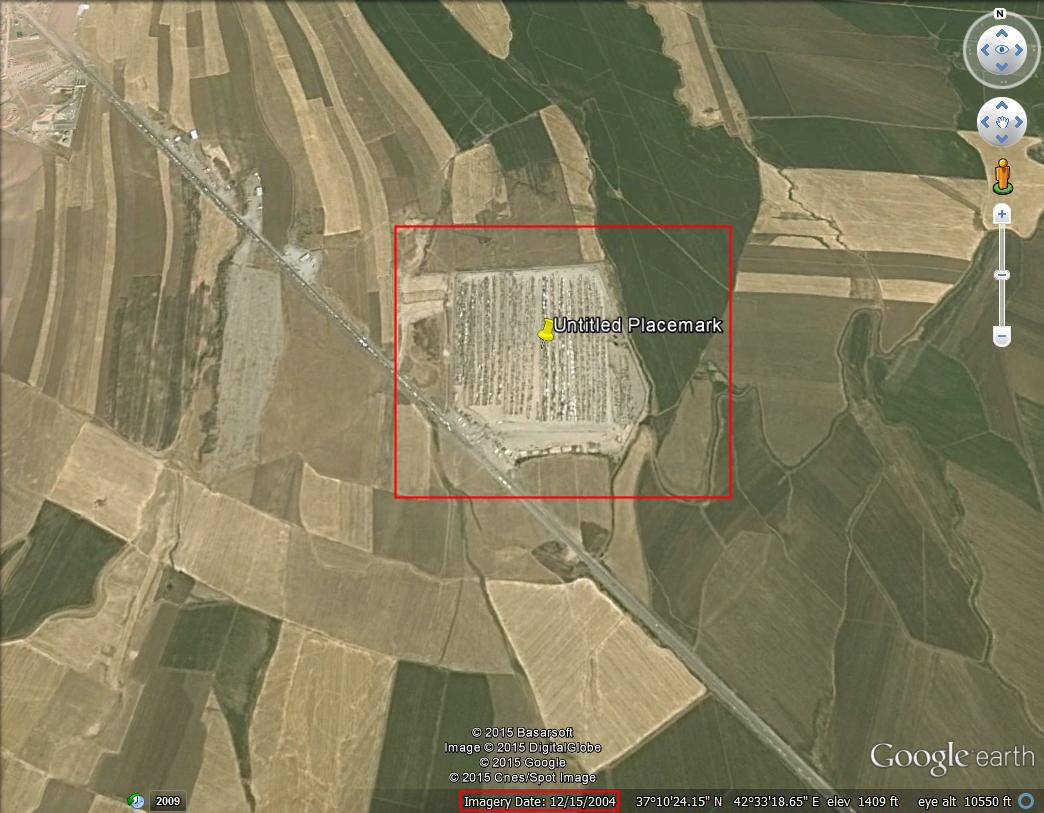 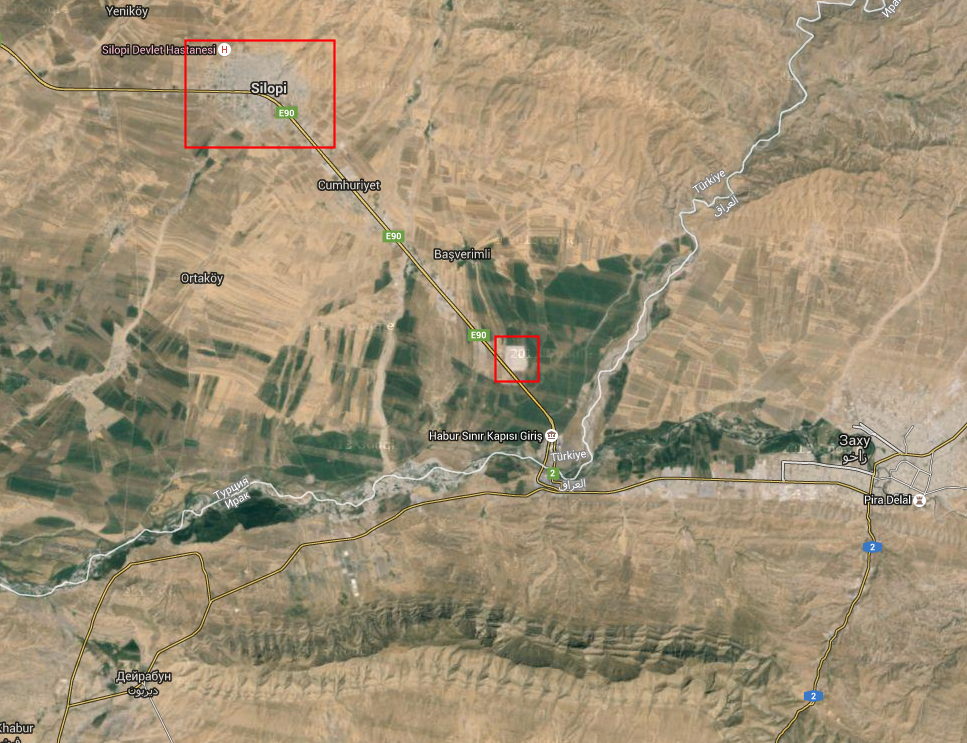 It is a pity that there are no earlier pictures in GoogleMaps, otherwise we could learn a bit earlier history of the ‘Islamic State’.

Also we’d like to cite Vyacheslav Gusarov, our colleague from Information Resistance, an expert of Center for Military-Political Studies in questions of information security, with fair comments: “Since when the Russian Ministry of Defense has the responsibility to search the evidence of ‘illegal supply of oil to Turkey’? Is this its function? Or to determine, what kind of information should be published? The situation distantly recalls the times of military dictatorship”. 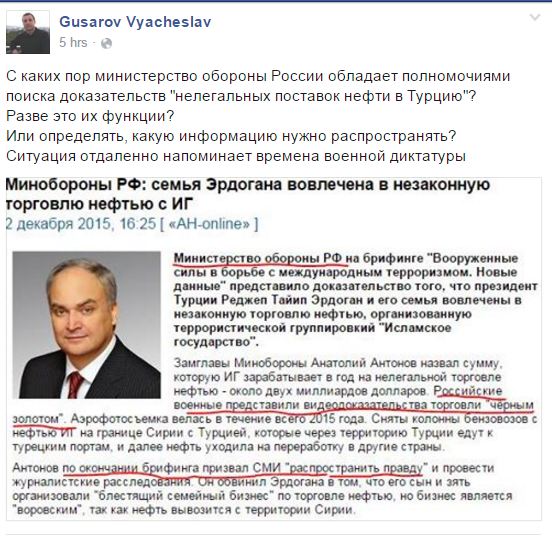 Summing all aforementioned, we can say that the joint special operation of international volunteer community InformNapalm, Information Resistance, Google and US Department of State is successfully fulfilled. The Russian General Staff is caught in lies again. In this context we would like to remind the statement of the Russian General Staff from December 2014, where the Chief of General Staff Gerasimov, hinting the revelatory journalism of InformNapalm and other OSINT teams, noticed that the proofs of the presence of the Russian army in Ukraine are ‘primitive forgeries’. Now, who is the liar, comrade Gerasimov?