Preparation of Jumping-off Ground for Russian Air Forces in Belarus 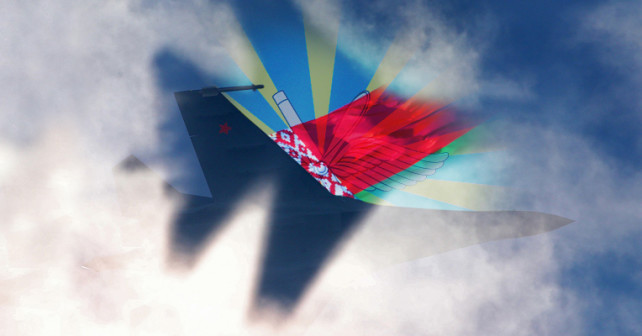 Due to flare-up between Russia and NATO after the downing of the Russian Su-24 bomber which invaded the airspace of Turkey, as well as the recent proposal of the Orthodox Montenegro to join the Alliance and become its 29th member, the confrontation of Moscow and NATO reaches a new level. The Russian politicians state that it is time to give symmetric response to the build-up of NATO’s influence, and the Foreign Ministry of the Russian Federation calls expansion of the Alliance “an openly confrontational step, forcing to the appropriate response”. In this regard, creation of new Russian airbase and advance of the Russian strike aviation units to Belarus gets on a new level and emerges full blown. This must also be considered in the light of the scenario of hypothetical full scale military aggression of Russia against Ukraine.

To begin, let’s take a closer look at the the chronology of this problem to understand the seriousness of Russia’s intention to use the Belarusian lodgment for their military goals: 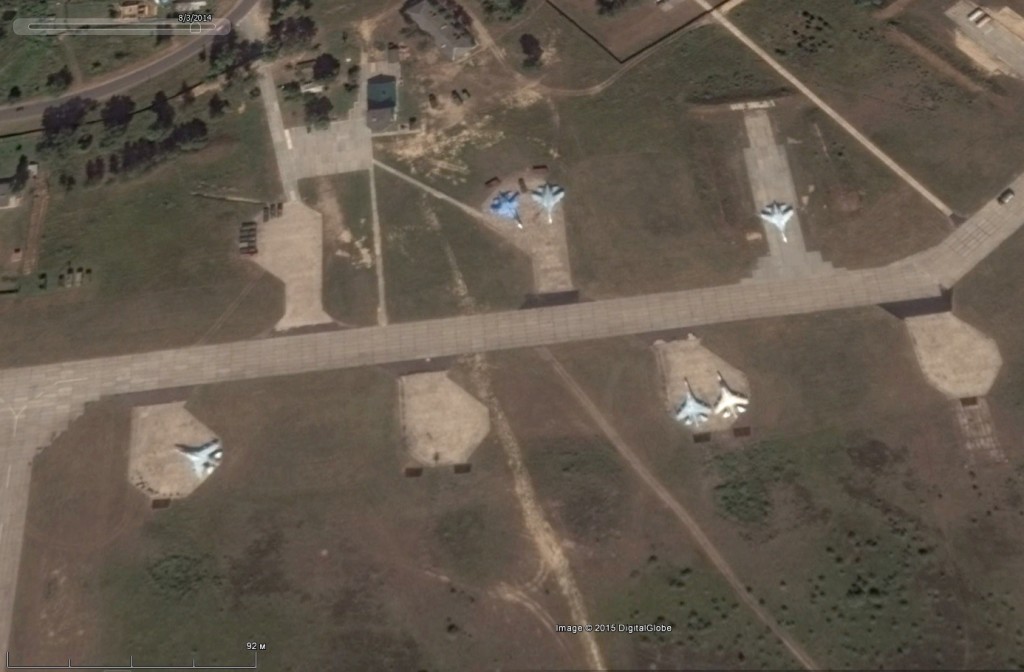 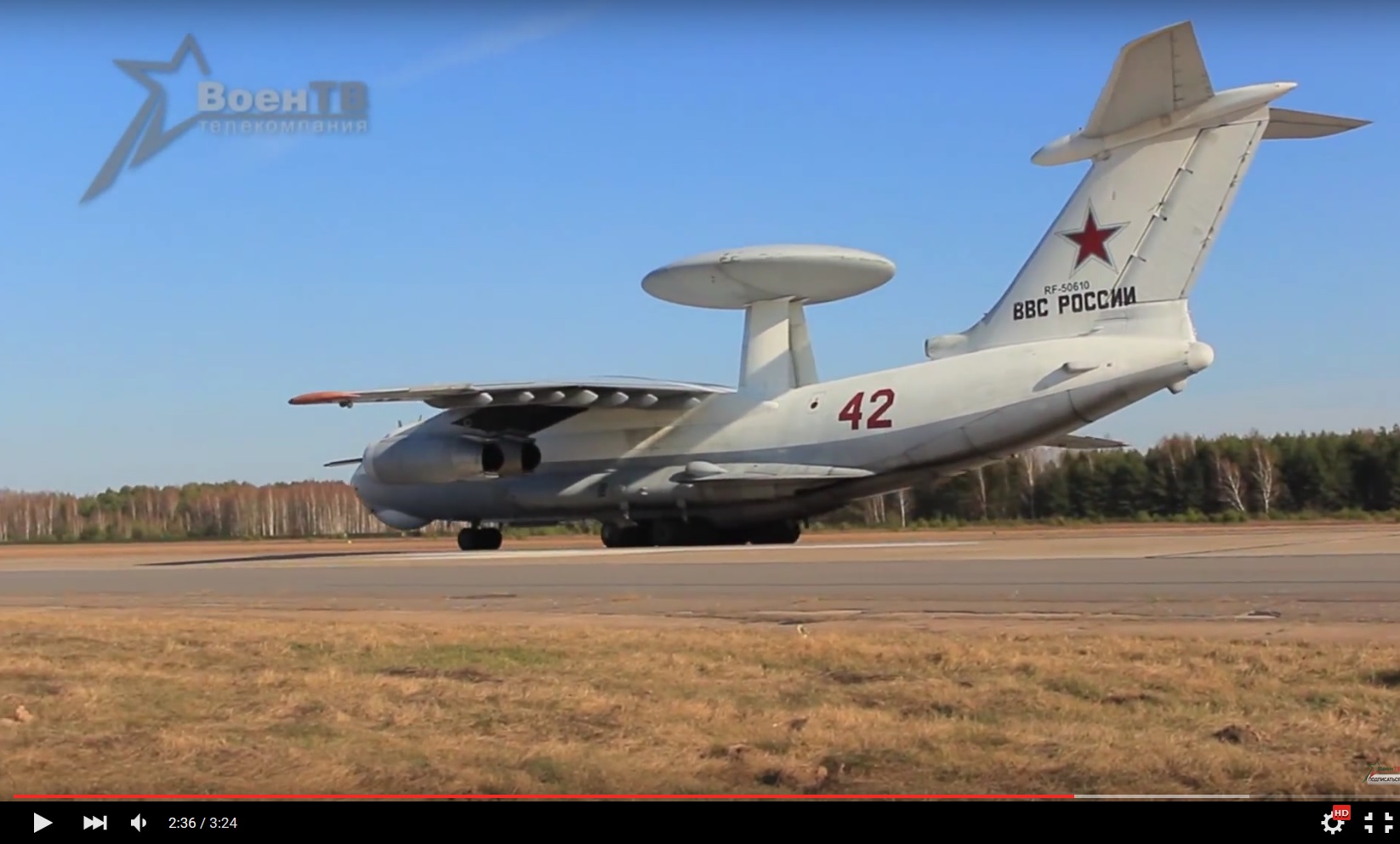 Thus, during the active phase of Russia’s combat actions against Ukraine in 2014, the Russian aviation group in Belarus consisted of around 5 transport planes, 1 radar detection aircraft and almost a full fighter wing of different Su-27 warplanes. It should be noted that the fighters located in ‘Bobruisk’ airbase were on 24/7 patrol until the first Minsk agreements about ceasefire were signed. In 2 days, on September 7, they left to ‘Besovets’ airbase (archive).

Starting from September of 2015, the Russian side begins speeding up this process: 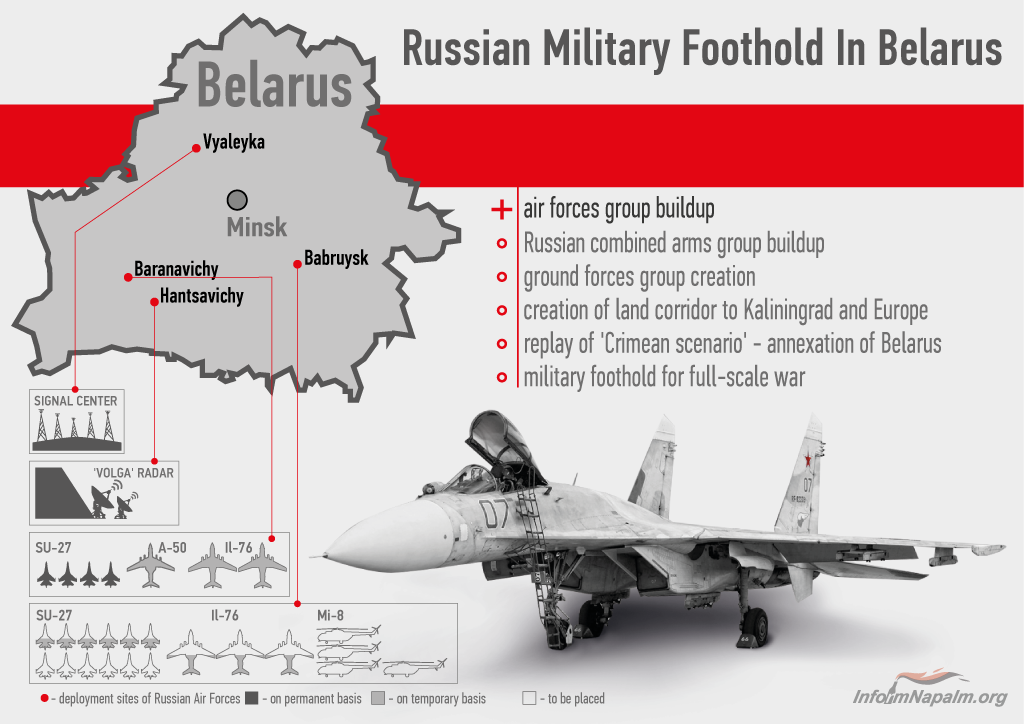 Russia’s decision to place its airbase in Bobruisk, apparently, was driven by several reasons. Firstly, comparing to other locations (like Baranovichi or Lida) Bobruisk is out of reach of the AGM-158 JASSM cruise missiles which Poland plans to put into service for its air defense systems. Secondly, the size and infrastructure of the airfield plays a great role (it used to host long-range bomber aviation). Thirdly, the strategic location of the airbase is one of the most important reasons, since it can be used in possible military operations against Ukraine. Thus Russia gets considerable military potential of usage of its airbases which, with the establishing of an airbase in Bobruisk, will surround Ukraine from almost all sides.

The airbase in Bobruisk is planned to be protected by the S-300V long-range air defense complexes from the 147th air defense brigade and air defense forces of Belarus. 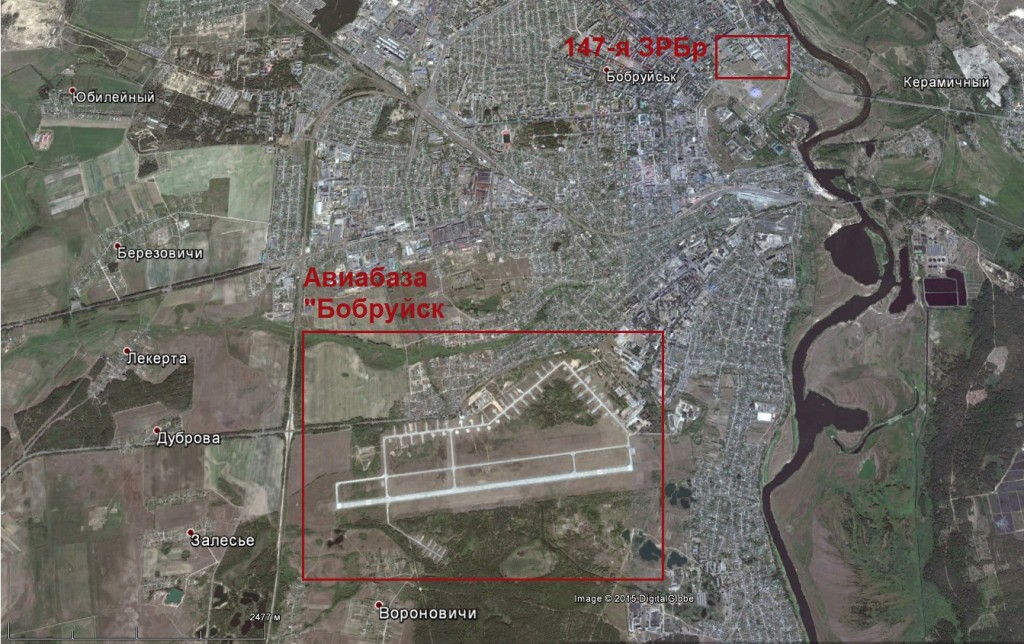 In the case of a confrontational scenario and the possible invasion of Ukraine by the Russian ground troops from the territory of the Belarusian foothold, the airbase in Bobruisk will play a crucial role in ensuring its cover and progress. One of the primary tasks of Bobruisk air group will be to neutralize Ukrainian air defense systems and to gain air superiority over the Ukrainian Air Forces. The argument in favor of this version are the tactical and technical characteristics of the Su-27SM3 aircraft that are possibly planned to be used at the airbase. These strike fighters are equipped with the new onboard weapons control system, which allows to use not only freefalling and guided air bombs, but also multi-purpose air-to-surface missiles Kh-59ME, Kh-59M2E, Kh-59MK2 and anti-radar missiles Kh-58E, Kh-58UShE, Kh-58UShKE, Kh-31PD designed to destroy radar stations of air and missile defense systems. Also, one of the main objectives of this airbase in the case of a hypothetical ‘major war’ in the region may be to counter the Polish Air Forces and to neutralize the European missile defense facilities deployed on the territory of Poland. The Russian air grouping in Bobruisk, among other things, will have to ensure the elimination of significant barriers to the Russian strategic deterrence forces. 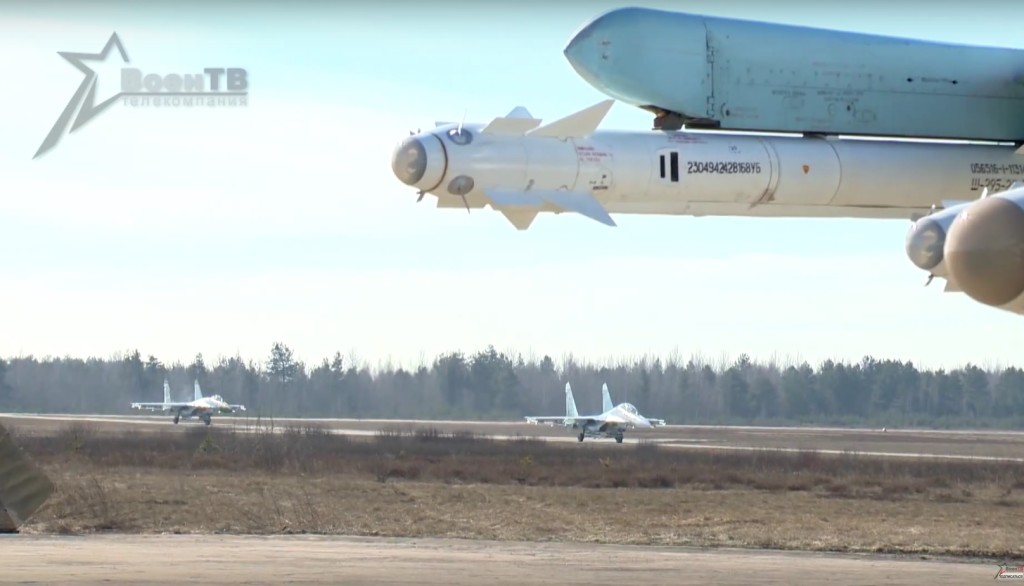 In the future, the Russian Su-34 frontline bombers, which, for example, take part in parades in Minsk, and MiG-31 interceptors may also be deployed there. In Soviet times, the 200th guards bomber aviation regiment was stationed at Bobruisk airbase, therefore it cannot be ruled out that Russia could return Tu-22M3 supersonic strategic bomber and missile carriers there.

On June 15, 2015, general Yury Yakubov, Coordinator General of the Defense Ministry’s Office of the Inspector General, announced plans to significantly change the Russian combined arms group in Belarus in the nearest future, provided that US heavy military equipment appears on NATO’s eastern borders. But the fact is that it is not present on the territory of Belarus so far. There are only two Russian bases: the 43rd communication complex of the Russian Navy ‘Vileyka‘, ensuring, using ‘Antei’ radio stations, communications with missile-carrying nuclear submarines, and ‘Volga‘ rocket warning radar of the Russian airspace forces integrated into the united regional air defense system of Belarus and Russia. Besides, a flight of four Su-27 fighter aircraft performing combat patrolling of the airspace at the western borders of the so-called ‘Union State’ on a regular basis with the rotation of personnel and equipment, is still stationed at Baranovichi airfield. 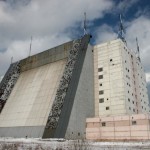 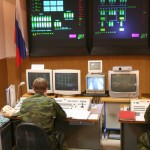 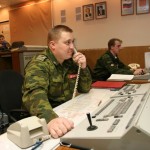 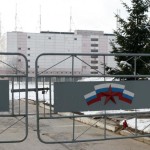 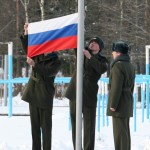 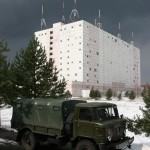 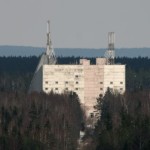 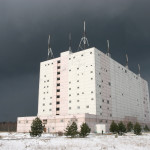 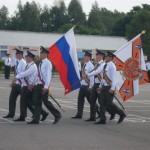 Allegedly, the Russian military leadership develops a plan to create a group of land forces, located in Belarus ca. 500 km westwards from the RF border. This will provide a strategic advantage for building up the defensive line on Belarusian lodgment and give an opportunity to control the land corridor to Kaliningrad. Then the realization of the Crimean scenario in Belarus will enter its final stage.

All this makes Belarus a hostage of Lukashenko’s policy of unification with Russia during two last decades. Doing this ‘uniting’ mission, he is lucky sometimes to gain some subsidized back feed, cheap energy and unhindered access for the sale of Belarusian production on the Russian market. This economical model worked well and did not require any significant structural changes and reforming of economy during last time. In connection with that all statements about Lukashenko’s turn towards West sound pretty silly, because it would require a fundamental change for the whole formed economical and political model of the country. This means also a political death of the ruling elite, assuming the fact that a considerable part of higher military and political leadership of the country are the potential agents of influence of the Russian Federation. For the foregoing reasons, Lukashenko can only maximally delay the process of the Russian base deployment, securing by that various economical preferences. The game with West is nothing but bluff. In the same time under the given conditions, which threat with the involvement of the country into the Kremlin’s military conflicts and increasing opportunities to repeat the Crimean scenario in Belarus, pro-Belarusian part of power ministries and nomenclature needs to maximally sabotage the processes of the deployment of next Russian military bases and contribute to the protection of constitutionally neutral status of Belarus.

In the same time it is very positive that Ukraine pays sufficient attention to the strengthening of its air defense. The Secretary of National Security and Defense Council of Ukraine Oleksandr Turchynov issued a statement, where he considers the threat of the Russian use of air forces in the case of the conflict’s escalation in the East of Ukraine, as very realistic. Accordingly, he called the rebuilding of the potential of air defense and air forces of the country the priority for the Ukrainian army in 2016 among the other tasks. Herewith it is important to note that the considerable reinforcement of air defense is needed not only along the front line and borders with the RF, but also, and first of all, on the Belarusian direction.